Mark P. Jones, who chairs the political science department at Rice University in Houston, recently crunched data on how members of the Texas House voted in 2009, and concluded that the body is increasingly polarized by political affiliation.

The analysis, which uses a methodology developed by scholars to track partisanship in the U.S. Congress, ranked members' partisanship based on their voting trends. Jones then categorized the members in ideological terms based on those scores — data we've used to create an interactive app.

The study highlights what Jones recently described as the "gradual extinction of conservative Democrats and liberal Republicans that has taken place over the past 30 years in Texas."

For example, three of the four most "liberal" Republicans will no longer be in the House when it convenes next year. Two — Tommy Merritt, R-Longview, and Delwin Jones, R-Lubbock — lost primary challenges this spring to more conservative opponents. The other, former Rep. Brian McCall, R-Plano, traded his powerful post as chairman of the Calendars Committee to become chancellor of the Texas State University System. Also, one of the more "conservative" Democrats in the House, Rep. Chuck Hopson, R-Jacksonville, switched parties last year shortly before filing for re-election.

Jones, the Joseph D. Jamail Chair in Latin American Studies, discussed his research this week with the Tribune. What follows is an edited transcript of the interview — as well as a five-minute audio clip reflecting those portions of the conversation.

Tribune: Your analysis categorizes and ranks members of the Texas House by their partisanship. You classify them as liberal or conservative or very liberal or very conservative. In looking at the data, for the most part, the rankings fit with our anecdotal sense of where members are politically. Can you tell us about the methodology in layman's terms?

Jones: It takes every roll call that people cast — where at least 2.5 percent of the people voted on the losing side — and uses those data, both in the individual year as well as over time, to sort of place somebody on a dimensional space. So the idea is that we can locate, based on their voting behavior, all representatives on this liberal-conservative dimension. There theoretically could be more dimensions, however, the analysis demonstrates. But in Texas, as is the case in the U.S. House now, pretty much all voting behavior occurs along this liberal-conservative dimension.

Tribune: Why did you do this analysis?

Jones:  I've done similar types of analyses for the Argentine Chamber of Deputies, the El Salvadorian congress as well. And just being here in Texas, I've developed a strong interest in Texas politics, as well as an expertise in Texas politics, and this is part of a larger book project we're working on looking at the evolution of the Texas party system, from a one-party dominant system to a very competitive two-party system over time.

One of the key points of evidence that we're using are these ideal-point estimations, or these liberal-conservative scores, from the 1973 period to the present. So we can look at the evolution: how the Legislature itself has evolved over time, as well as how individual members locate in any one legislative session. This is part of a larger project that we're looking at the evolution of the Texas party system and using as one of the building blocks the behavior of the members of the Texas House.

One thing that we see ... is that the House has become an increasingly polarized place, much like the U.S. House has. It's sort of following national trends. In the past, the differences between the parties weren't all that great. Whereas in recent years, we've seen the distance between the Republican and Democratic parties, in terms of the average location of their members on the liberal-conservative spectrum, have become broader and broader and broader.

Tribune: There isn't overlap. You don't see a Republican scoring more liberal than the most conservative Democrat. Is that an example of what you're talking about. 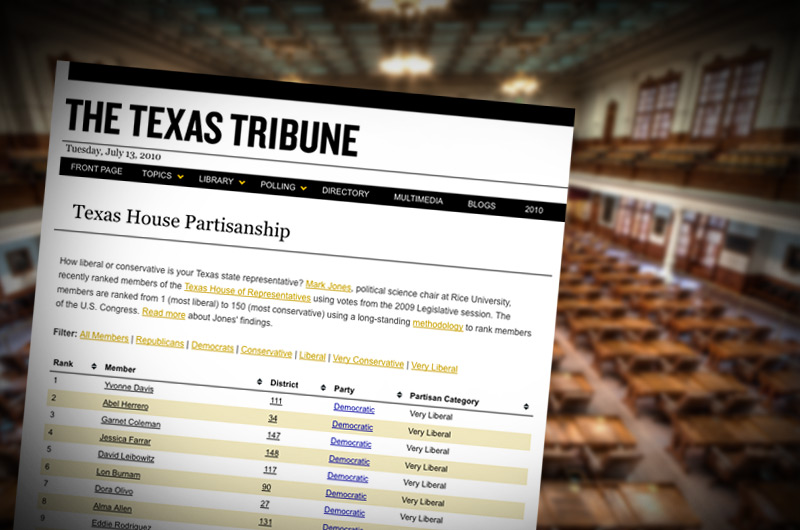 Tribune: In doing this research, what, if anything, surprised you — and what are the limitations, if any, to this type of research?

Jones: Well, one aspect is that these are estimates, and there's some error surrounding the estimates. That's one potential error there. The other is that it's based on roll call votes. So, to the extent to which people behave really strategically, or they act in a contradictory manner, you're not going to get a true measure of their ideological preferences, if they're at some point voting their preferences, but other times voting strategically.

Tribune: So this is interesting for political scientists and probably political consultants — and political junkies like us here at the Tribune. If I were a regular voter, a newspaper reader, not an insider, what do you think I should take away from it? What's the significance of the rankings?

Jones: It provides you with a good location of how your representative is behaving once in the House. One of the points of information that a voter typically has is they know if [their representative] is a Republican or a Democrat, but that's about it. What this is telling you is, in their voting behavior in the House, are they behaving in a very liberal manner, a liberal manner or a conservative manner, if they're a Democrat. If they're Republican, are they tracking more towards the liberal side of things or very conservative?

Where these things seem to have validity, or face validity, is that people like Tommy Merritt, Delwin Jones, Brian McCall were all attacked for being too libreral. So if I'm a Republican primary voter, or member of the Republican Party, and I want to see how my representative is behaving in the Legislature, what these data are showing is, are they behaving more like Democrats, or less like Democrats. And likewise, if I'm a Democrat, are they adopting a more liberal stand or trending more towards the Republican side of things.