More than two-thirds of Texans say their confidence in the state's public schools ranges from shaky to nonexistent, according to the new University of Texas/Texas Tribune poll.

About a quarter of the respondents — 26 percent — express "complete" or "a great deal" of confidence in the public schools. Almost a third — 31 percent — say they have "hardly any" or "very little" confidence. The other 42 percent say they have "only some confidence" in the primary system for educating the state's children.

"It is difficult," says state Rep. Rob Eissler, R-The Woodlands, who chairs the House Public Education Committee. "It's difficult to get the focus and the depth when our schools can't react fast enough to the needs of the market. … I would say a lot of people don't see the schools the way they are today. There's a lot of good teaching going on in our schools. There's been some criticism of high-stakes, low-standards tests. We've seen that, and we've been trying to fine-tune that. For the most part, I think our schools are doing well."

A majority of Texans — 56 percent — say "there are many ways to succeed in today's work world without a college education," while only two in five — 42 percent — agree that a college education is a necessary ingredient of success. And most of them don't think qualified people have access to higher education anyway: Only 37 percent believe most qualified students have the opportunity to go to college; 54 percent say they don't.

That's partly a budget problem, if you ask policymakers. And the state's budget is famously in a wringer, with lawmakers predicting a shortfall next year of $11 billion to $18 billion. They're already seeking cuts from state agencies and considering almost anything that would either cut costs or raise revenues, so long as it doesn't involve cutting a popular program or creating a new tax.

In that light, nearly half — 46 percent — agree that "state revenues should be increased to make college education more affordable for all Texans." Change that statement to "... only the most needy Texans," and just 13 percent agree with it. Nineteen percent think state revenue should remain the same with no change in college affordability, and 9 percent would agree with cutting state revenue even if it makes college less affordable.

"So, it's 'state revenue should be increased,'" says Rep. Scott Hochberg, D-Houston. "Does that mean they want to pay more taxes? Probably not. Do they think college should be more affordable? Yes. … The unpredictability of the college expense, I think, causes people great angst. You can't predict tuitions three years out, let alone 13." 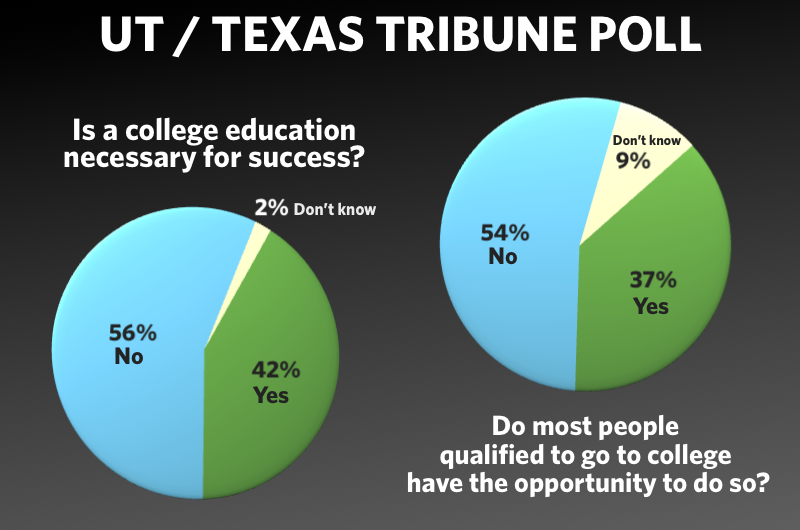 Presented with a list of "problems that schools might face" and asked whether they are major or minor, half or more respondents rank the following as major:

Other problems that drew substantial percentages of "major" responses included: school overcrowding (49 percent), liberal bias in the classroom (45 percent) and conservative bias in the classroom (25 percent). On those last two, 25 percent say liberal bias is no problem at all; 43 percent say the same about conservative bias. Two-thirds say "too much religion in the schools" is not a problem.

"Our schools are all working hard," he says. "But they all have challenges that are a reflection of society. When I was a school board member, people would complain that there are drugs in schools. I would assure them that we don't supply them."

Another finding of the poll: Most Texas voters would rather leave responsibility for public-school improvements to the states (68 percent) than to the federal government (23 percent).

Standing with the SBOE

The poll asked whether Texans agree with a number of curriculum and textbook revisions recently approved by the State Board of Education. They agree with some but not with others. To wit:

• Slightly more than half — 52 percent — approve of science standards that "present evidence that is both supportive and critical of evolution." Just over a fourth — 28 percent — disapprove of that standard.

• History standards that discuss "the Christian religious beliefs of America's Founding Fathers" have the approval of 60 percent of those surveyed, including 45 percent who "strongly approve." Only 23 percent disapprove.

• Discussion of the "importance of America's free market economy to its success as a nation" has the approval of 73 percent of those surveyed (including 51 percent who strongly approve) and the disapproval of 11 percent.

• Reducing the amount of time teachers are required to spend talking about the contributions of racial and ethnic minorities is supported by only 35 percent in the survey, while 42 percent disapprove and 20 percent say they don't have a preference one way or the other.

Answering questions about themselves, 67 percent of those polled say they don't have children at home. The next biggest group — 28 percent — say their offspring attend public schools, while the rest attend private schools or are schooled at home.

This is the third University of Texas/Texas Tribune poll (the first two are here and here). The internet survey of 800 registered voters was conducted May 14-20 and has a margin of error of +/- 3.46 percent.