Morgan Smith has a story today about Texas' lack of confirmed United States attorneys, the appointed federal prosecutors who oversee cases in 94 districts around the country and its territories.

Currently, none of the four Texas districts have "presidentially confirmed" federal prosecutors, who are responsible for enforcing federal laws. Last week, John B. Stevens, a state district judge in Beaumont who was Barack Obama's only nominee in Texas, withdrew his name from consideration, citing the protracted confirmation process. The continuing vacancies owe partly to skirmishing between the state’s GOP senators and the Democratic House delegation over who wields the power to recommend nominees, and partly to a cautious White House with a recently-turned-over general counsel and a heavy legislative agenda. In contrast, previous administrations typically had their Texas selections installed a little over a year into their terms.

I wondered how other states compare, so I set out to make a map of prosecutor appointments and vacancies nationwide. Turns out, as you can see below, more than half the country faces the same situation as Texas. Some 52 of the 94 districts don't have top prosecutors appointed by Obama and confirmed by the U.S. Senate. Most, like Texas, are likely functioning with interim prosecutors.

Getting the data for this map, however, was no easy task.

Most governmental boundaries – cities, counties, voting precincts, etc. – are public information and readily available on sites across the Internet. The Texas Education Agency, for example, posts free mapping data on school locations and district boundaries on its website. We've used these files to make maps for this blog.

Getting federal judicial boundaries proved much tougher. Neither the Administrative Office of the U.S. Courts nor the U.S. Department of Justice could help. I tried numerous Google searches with no luck. So, alas, I made them manually by compiling a list of U.S. Attorney districts, the counties within them, and the Justice Department's list of current appointments. 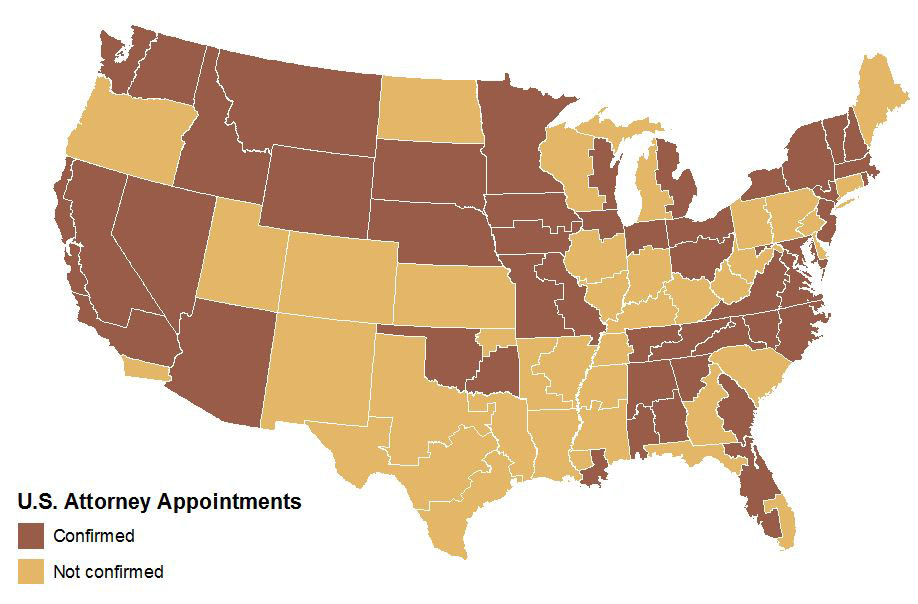 For any GIS professionals or journalists out there who might need to create a similar map someday – for prosecution totals, appointments, whatever – download these shapefiles of U.S. District Court districts (4.2 Mb .zip) and the counties within them. I've also included the raw data I used to assemble both.