The runoff elections in 18 Texas primary races — all but two involving Republicans — probably won't change the overall temperature of the statehouse or the Texas delegation to Congress. The partisan makeup of those places isn't at stake until November.

But for three statehouse incumbents and challengers in two other races — for the State Board of Education and the Texas Supreme Court  — today's vote is a big deal.

Both parties are closely following the GOP runoff for Texas Supreme Court. The legal establishment is, for the most part, rooting against Rick Green and in favor of Debra Lehrmann, a Fort Worth judge with years of experience on the bench. Democrats are hoping Green's the candidate — only because they think he would be easier to beat in the general election.

The former state legislator draws a lot of support from grassroots Republicans and some antipathy from the establishment in the party. The Democratic angle: Green, who carries some ethical baggage, won't be the sort of candidate general election voters want to see. Further, Democrats see the court seat as among their best chances to get back into statewide office for the first time in 1998, along with the open seat on the Texas Railroad Commission that resulted when David Porter ousted Victor Carrillo in the Republican primary.

But Texas voters have elected all sorts of people to office in general and to the court in particular. When people like former judges Steve Mansfield and Steven Smith are elected to either of the state's high courts, the regulars in the courthouse crowd mutter, "It's only one of nine," and go on about their business. Neither Green nor Lehrmann has the war chest to run a full-blown statewide campaign, and voters generally don't pay these races much mind. Winning depends almost entirely on grassroots muscle — who can turn out their votes — and on the hazier idea of name identification: Voters pick based on which name looks better to them, for whatever reason.

In another contest to watch, the battle for a State Board of Education seat pits Brian Russell, a favorite of social conservatives, against Marsha Farney, a career educator, in a GOP runoff. That seat, in District 10, covering a large swath of Central Texas, is currently held by Cynthia Dunbar, R-Richmond, a leading social conservative on the board who is not seeking re-election. It's been a relatively low-profile race, but it offers voters another chance to drop their oars into the politics of the state board, a body so reliably weird it should have a listing in state tour guides.

On the state House front, three incumbents — Fred Brown, R-Bryan; Norma Chavez, D-El Paso; and Delwin Jones, R-Lubbock — are fighting off  challengers. That's never a good sign for an incumbent. Control of the House isn't at stake, but there are some features worth noting. The El Paso race is, in some respects, a contest between lawyers and anti-lawsuit business owners, with Chavez on the first gravy train and Naomi Gonzalez on the second. Jones' opponent in Lubbock, Charles Perry, is a founder of a local Tea Party, and that contest had the distinction of attracting more voters in the first round — more than 25,000 — than any other House race in the state. Brown's opponent, Buddy Winn, has been the Brazos County tax assessor-collector for years, first as a Democrat and, more recently, as a Republican.

Three more races for open seats have been contentious and relatively expensive but won't change the overall map however they turn out.

In the first, Mabrie Jackson and Van Taylor are in a GOP runoff for retiring state Rep. Brian McCall's seat in Plano. McCall is for Jackson, while two other Collin County representatives have endorsed Taylor. The bottom line is that there'll be a Republican in the seat either way, as no other major party candidate is on the ballot in the November election.

In the second, Dr. Susan Curling and Dan Huberty vie for Joe Crabb's seat in suburban Houston. Same formula, except that there's a Democrat on the ballot in November. The general election could change the partisan math in the House, but the runoff won't.

The last, also a GOP contest, is in Lubbock, where Carl Isett is retiring and has endorsed John Frullo as his successor. Mark Griffin, a former Texas Tech University regent, stands in the way — and finished well ahead in round one.

Everything else on the runoff ballot involves candidates who want bouts with incumbents in November. The congressional ballot has seven of those runoffs, including relatively loud ones in CD-17, where Waco Democrat Chet Edwards is the incumbent, and in CD-23, where San Antonio Democrat Ciro Rodriguez sits. The statehouse has three of those — the two noisiest in suburban Austin — and the question is less about who wins than about how the challenges set up in November. Two stand out in the Texas House, both in the Austin area. In Southwest Travis County, Holly Turner and Paul Workman each want to challenge Democrat Valinda Bolton of Austin in November. And in Williamson County, to the north, Larry Gonzales and John Gordon each have designs on the post occupied by Democrat Diana Maldonado of Round Rock.

We have a list of the runoff elections all ready to go; when the results begin to come in after 7 p.m. tonight, they'll be posted there in real time. Click here or on the graphic below. 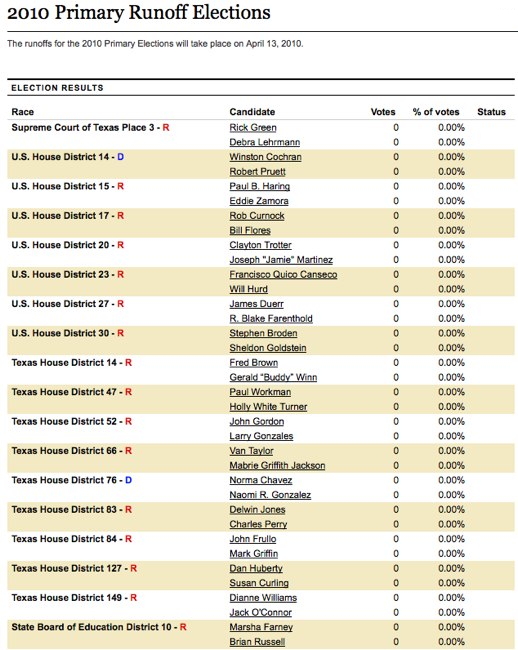