Lawmakers on Wednesday issued a public rebuke to the Texas Forensic Science Commission, but the commission's embattled chair wasn’t around to hear it.

The knuckle-rapping came at an interim hearing of the House Public Safety Committee, whose members were clearly piqued at the conspicuous absence of John Bradley, the commission's newly appointed head, and Leigh Tomlin, its administrative coordinator.

Ninety minutes of back-and-forth covered the besieged agency’s nonexistent enforcement power, lack of written procedural guidelines, and public records policy. On hand to receive the grilling were two current members of the commission, Garry Adams and Sarah Kerrigan, and one former member, Aliece Watts — all of whom stopped short of defending Bradley under pointed questioning from committee chair Tommy Merritt, R-Longview and others.

It’s only the latest set-to between the formerly obscure board and lawmakers, who for months have been pushing the commission, which investigates complaints of forensic misconduct, to reform its operations and to review whether faulty science led to a death sentence for Cameron Todd Willingham in 1992. Bradley has taken heat for stalling that investigation since he was appointed in October by Gov. Rick Perry — who displaced Bradley’s predecessor and two other members on the eve of the meeting at which the board was set to take up that case.

In a brief phone interview after the meeting, Bradley brushed off Merritt’s ire at his absence, saying the lawmaker was "being misleading.”

“It was some surprise to me that Rep. Merritt thought that less than a week’s notice was sufficient to take an elected official who has a busy schedule to suddenly drop everything and come to this hearing.” He also questioned Merritt's motives, saying he was "trying to create a controversy here, when the real issue is, why did his staff fail to properly plan for a meeting?"

Bradley — who is appointed to the commission, but elected to his position as Williamson County district attorney — then said he was leaving the office and declined to provide a contact number to be reached for additional questions.

Earlier, at the meeting, the fellow forensic board members who did appear distanced themselves from Bradley under questioning by the committee. The sharpest queries came from the visibly peeved Merritt and state Rep. Lon Burnam, D-Fort Worth, who made clear his displeasure with the agency’s lack of transparency. 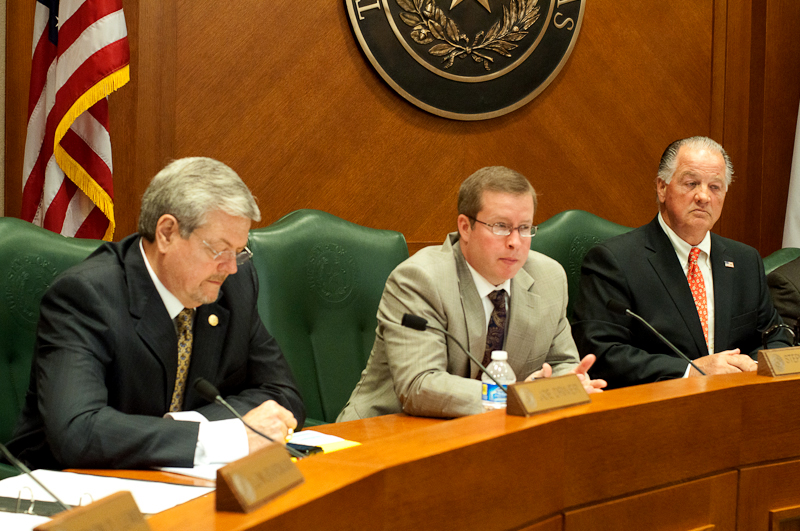 Merritt heatedly described the apparent conflict between the current panel’s testimony and Bradley’s November statements before the Senate’s Criminal Justice Committee. Back then, Bradley insisted under questioning that the board could not move forward in probing the Willingham case until it crafted uniform rules.

On Wednesday, Merritt scolded Bradley in absentia. “What John Bradley testified in front of the Senate committee was that he could not do anything [on the Willingham case] because the commission needed to be organized. ... And what I’m hearing the commission say now, from two commissioners and one former commissioner, that in your opinion, you were organized at the time,” Merritt said. “You were doing your duty, and then all of a sudden John Bradley says, ‘I can’t answer any questions and we can’t move forward for almost a whole year because we didn’t have our ducks in a row.’”

Watts, the former member, concurred. She responded that she had been “dumbfounded” when Bradley said the commission wasn’t ready to hear complaints.

Merritt also asked about a Fort Worth Star-Telegram article that reported commission members were asked to destroy all e-mails relating to their work.

“I don’t read the newspapers, so I’m not familiar with the story,” Kerrigan said, but added she did remember that instruction from Bradley. She said she “absolutely” did not think he had the authority to make such an order and that she refused to delete her emails.

It took nearly an hour into the hearing before anyone mentioned the case that drew national scrutiny to the state agency. That came from another committee member, state Rep. Barbara Mallory Caraway, D-Dallas, who, referring to the carefully chosen wording of the discussion, asked: “Is this all about that case, the burning case? Of the man who was convicted of burning his kids? For the public listening, there’s just a gap in between somewhere — like we’re talking in space about some particular issue and kind of throwing darts somewhere but missing the middle.”

The burning case would be that of Willingham, the man executed for the arson deaths of his three daughters. Methods the state used to prove he committed arson were called into question in a 16,000-word September 2009 New Yorker story that presented persuasive evidence of Willingham’s innocence.

Just before the October meeting at which the agency was set to investigate the Willingham case, Perry replaced then-chairman Sam Bassett with Bradley, the Williamson County district attorney. Two other commissioners, including Watts, also got the boot. When Bradley took over, he immediately delayed consideration of the Willingham case, saying he needed more time to study the board’s procedures.

Willingham finally came up by name near the end of Wednesday's hearing, when Burnam asked the panel what the agency planned to consider during its next meeting on April 23. One item on the agenda that day will be the case of the Corsicana man the state executed in 2004.