Rep. Chuck Hopson, D-Jacksonville, will seek reelection, but as a Republican — a move that might save his neck while wrecking the party's chances at winning a majority in the House.

Hopson, who barely scraped by in 2008, initially planned to make an announcement this afternoon but moved it up to this morning as rumors spread and the Texas Democratic Party scorched him in a press release.

"President Obama and the Democrats in Congress just don't reflect the values of this district," he said.

Texas Democratic Party Chairman Boyd Richie's response was combative. “It takes strength and integrity to stand against the special interests — and while some members have that strength, others like Chuck Hopson, apparently do not,” he said. “In the Democratic Party, there is room for members who are conservative and progressive — the only reason anyone would leave is for crass political reasons and a refusal to stand up to special interests.” 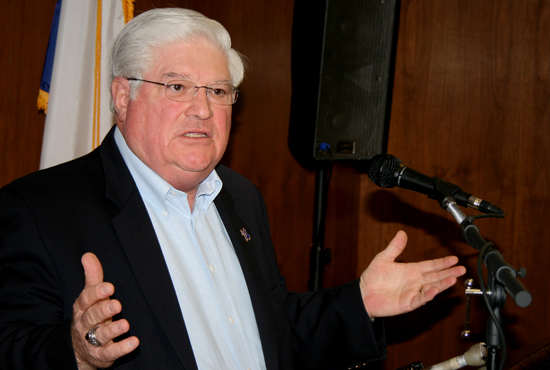 Cathie Adams, the new chairman of the Republican Party of Texas, said, "I think it's very exciting. We will take people to our winning team and encourage them." She didn't immediately know of plans to help Hopson get a "safe" primary without major opponents, but others in the party are already working on that.

Hopson's is the second Democratic seat to fall; David Farabee of Wichita Falls said earlier this year that he won't seek reelection. Both seats are in strongly Republican turf, and they're much easier for incumbent Democrats than for new ones. Losing the two seats, before the election cycle is really underway, is a huge setback for Democrats who hope to take a majority in the House. Right now, there are 76 Republicans and 74 Democrats there.

Both Farabee and Hopson are so-called "WD-40s" — white Democrats over 40 — who've demonstrated an ability to hang onto their seats while Democrats around them are falling to Republicans.

Hopson, in fact, occupies the most Republican Texas House seat held by a Democrat — a legislative district where the average statewide Republican beats the average statewide Democrat by 33.4 percentage points. (Farabee's is the second-most Republican, with an index of 32.6). The two were among the GOP's top targets as it tries to bolster its narrow majority in the House and win another term for House Speaker Joe Straus III.

Democrats start this election cycle with dreams of regaining the House majority they lost in the 2002 elections. This significantly raises the level of difficulty, because the Republicans they have to beat to get their numbers are generally in Republican districts. It's not impossible — Texas Democrats have been as strong in legislative races as they have been weak in statewide contests — but it'll be difficult.

Hopson is the first House member to switch parties since Kirk England, D-Grand Prairie, who went from the Republicans to the Democrats two years ago.

Hopson squeaked by in the last election, winning by 120 votes out of almost 53,000 cast. But he's accustomed to squeaking by — he's never received more than 53 percent in a contested general election.

The switch could actually hurt Hopson's chances for reelection. It's not hard to beat a Democratic voting record in a Republican Party primary, and the folks who've been with Hopson up to now are steaming mad. He'll still have the backing of the Texans for Lawsuit Reform — a tort reform group that endorsed him as a Democrat and presumably would do so now that he's a Republican. But any opponent in the GOP primary is a vehicle for revenge. Hopson's new political enemies — institutional Democrats — might be willing to put some money behind a Hopson opponent just to teach the switcher a lesson, and to forewarn any other Democrats who are thinking about the same move.

The 20/20 PAC — a political committee formed around the WD-40s — expelled Hopson on the news: "We learned this morning of Rep. Hopson's intentions to switch political parties. In light of that, he is no longer a member of our organization. We are profoundly disappointed by his decision."

The leader of the House Democratic Caucus was philosophical. "This will have only a marginal impact on House Democrats' inevitable progress toward a majority," wrote Jim Dunnam, D-Waco, in a memo to Democratic House members. "Year in and year out there is always a certain amount of partisan turnover in individual seats, and we plan for that... Some of those changes would be in areas more difficult for us to compete without incumbency... Our overall goals and plans for 2010 have not changed, and we will gain a majority in the House in 2010."