With all precincts reporting, Cloud led Democrat Eric Holguin 55 percent to 32 percent, according to unofficial returns. Cloud, a former chairman of the Victoria County GOP, needed to finish above 50 percent to avert a runoff later this summer.

The special election determined who finishes Farenthold's term, which ends in January. Both Cloud and Holguin are their party's nominees in November for the full term that starts after that. The seven other candidates in the special election were Democrats Raul "Roy" Barrera and Mike Westergren, Republicans Bech Bruun and Marty Perez, independent candidates Judith Cutwright and Chris Suprun, and Libertarian Daniel Tinus.

None of the seven other candidates received more than 5 percent of the vote.

There had been a push by both Republican and Democratic leaders to unite behind Cloud and Holguin, respectively, in the special election. Democrats had hoped to force a runoff with Holguin, a former staffer at the New York City Comptroller's office, while the GOP was looking to avert one in the 27th District, which covers a large portion of the Gulf Coast and reaches northwest toward Austin. 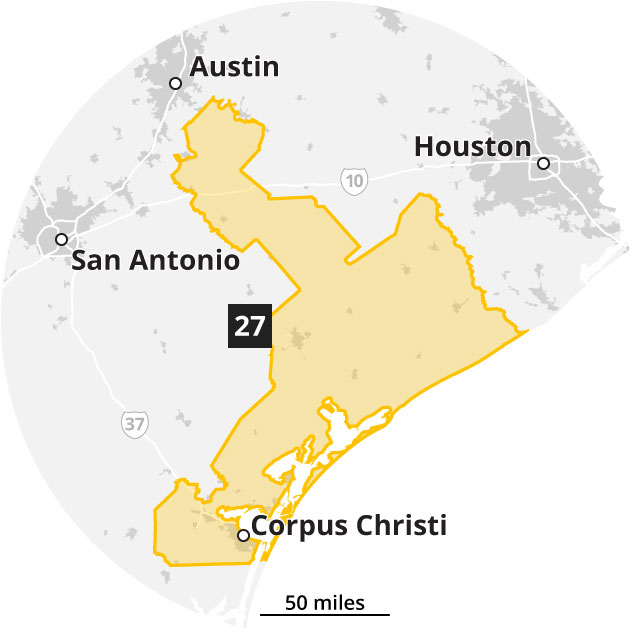 Another Republican who had urged a vote for Cloud was Gov. Greg Abbott, who endorsed him in the closing days of the special election.

"I am proud to have endorsed Michael Cloud in today’s special election, and I am pleased that Texas’ 27th Congressional District will finally have adequate representation in Washington D.C.," Abbott said in a statement Saturday night. "As we approach the one year anniversary of Hurricane Harvey, it is imperative that Texans who lost everything have a Congressman who will continue to fight for their needs, and I know Michael will be that representative."

Holguin downplayed the results of the special election, saying it was "just to fill the remainder of a lame-duck term."

The special election was triggered by Farenthold's sudden resignation in April amid the fallout from the revelation that he used $84,000 in taxpayer money to settle a 2015 sexual harassment claim. Farenthold, who had already announced he would not seek re-election, also was being investigated by the House Ethics Committee.

After Farenthold stepped down, Abbott sought — and received — Texas Attorney General Ken Paxton's blessing to suspend state law and speed up the timeline for the special election, citing the need for the district to have representation as it continues to recover from Hurricane Harvey.