Gov. Greg Abbott is nudging Congress to funnel an additional $61 billion to Texas for infrastructure rebuilding after Hurricane Harvey. Here's what you need to know:

• Abbott met with congressional leaders in Washington, D.C., on Tuesday, handing lawmakers a 301-page report from the Governor's Commission to Rebuild Texas that included project proposals ranging from repairing streets to major flood control projects. Haggling over funding began earlier this month, when a request by most of Texas' congressional delegation for $18.7 billion in aid went largely ignored. While Congress has already given the OK on more than $51 billion in disaster relief, it's unclear how much of the pie will land in Texas, since the funds will be divvied up between several parts of the country impacted by natural disasters.

• There was a little drama yesterday. After the aid request was disregarded, Abbott told the Houston Chronicle on Oct. 11 that the Texas delegation needed to get "a stiff spine" and worried that Texans could get "rolled" if their representatives didn't come through — and 20 days later, those comments still aren't sitting well with many members. In a meeting with most of the Texas congressional delegation at the Capitol, U.S. Rep. Joe Barton, R-Ennis, reportedly told Abbott his comments to the paper "were not helpful," per several sources in the room.

• Back home in Texas, the Legislature's still talking about Harvey aftermath. A handful of House and Senate committees are holding hearings today to discuss interim charges and the state's response to the storm. Follow Texas Tribune reporters Matthew Choi and Giulia Afiune for updates.

• Join us on Facebook today at noon for our live recording of The Texas Tribune's TribCast. We're talking about the race to replace Texas House Speaker Joe Straus and why we should slow our roll a little bit — plus more. Have a question for the Tribune's Editor-in-Chief Emily Ramshaw? Reply to this email with your question or tweet it with #TribCast.

• U.S. Rep. Jeb Hensarling, a powerful Republican from Dallas, says he's not running for re-election in 2018.

• The American Civil Liberties Union followed through with its threat to sue the Trump administration to release an undocumented 10-year-old girl with cerebral palsy.

• The U.S. Environmental Protection Agency appointed the Texas Commission on Environmental Quality's chief toxicologist to its Science Advisory Board.

• At least eight are dead after a man in a truck ran over several pedestrians near the World Trade Center in New York. (Associated Press)

• House Republicans in Congress are delaying the rollout of their tax reform proposal. It's now set to happen Thursday. (Politico)

• State Rep. Sergio Muñoz Jr., D-Palmview, is hoping he doesn't have to pay a legal company nearly $3 million in a malpractice case. (The Monitor)

• The FBI raided a Dallas financial office amid allegations that some retirement accounts the company manages were missing funds. (The Dallas Morning News $)

• Houston is thinking about allowing hundreds of homes to be built in a floodplain. (The Houston Chronicle $) 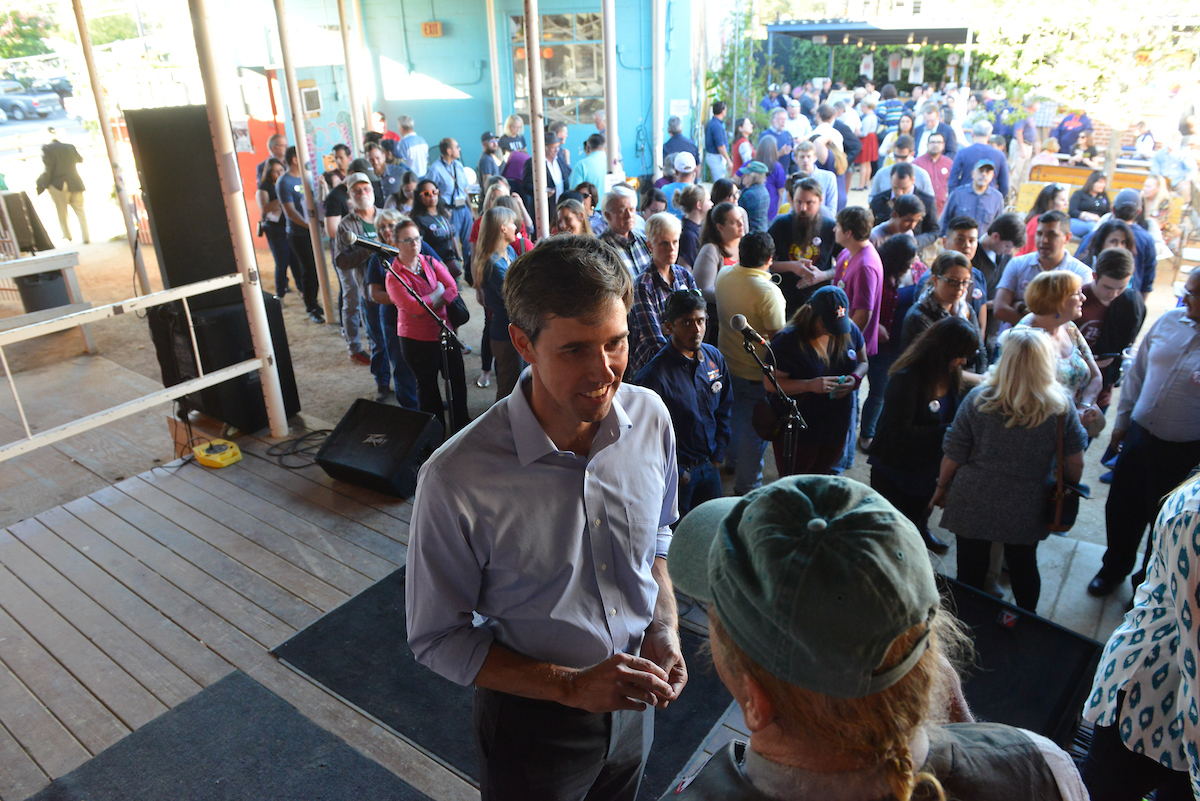 U.S. Rep. Beto O'Rourke, D-El Paso, speaks to supporters during an event in San Antonio on Monday for his bid to unseat U.S. Sen. Ted Cruz in 2018. Photo by Robin Jerstad for The Texas Tribune. See more photos on our Instagram account.

"We have a law that allows the government to totally screw you around and get away with it."

— Wayne Dolcefino, a former Houston investigative television reporter, on a Texas law that shields the state and its entities from lawsuits — even if an entity breaches a contract.