• Texas Republicans are cautious and quiet. U.S. Sen. John Cornyn — the second-most powerful Republican in the Senate — sidestepped questions about Mueller's investigation Monday, telling The Washington Post, "Special counsel's got his own responsibilities and it doesn't involve us." U.S. Sen. Ted Cruz told The Dallas Morning News the indictments "are undoubtedly serious," and added, "We'll have to see if the facts back up the charges." Texas Attorney General Ken Paxton said during an appearance on Fox Business that he is "a little disturbed" findings from the investigation "leaked," later adding he "wouldn't necessarily dispute" a recent Wall Street Journal editorial that suggested Mueller should resign.

• Where's #txlege? Most state lawmakers have been mum since Monday's news broke, with a few exceptions. State Rep. Bill Zedler, a Republican from Arlington, tweeted several times: "So after a year of investigation there is still no evidence of collusion with the Trump campaign & Russia." State Rep. Poncho Nevárez, D-Eagle Pass, also tweeted throughout the day, at one point saying, "If you watched Fox News today you would've learned that the Clinton Administration is having a rough go and that Halloween candy is boss." 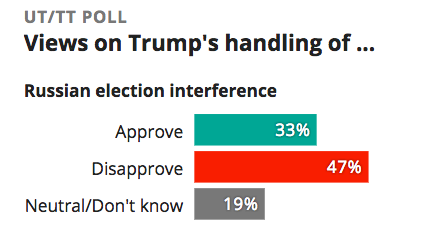 • Gov. Greg Abbott is in Washington, D.C., today, where he's set to discuss Hurricane Harvey aid with members of Congress.

• Here's a look at who's interested in replacing retiring House Speaker Joe Straus so far.

• Open enrollment for health insurance begins Wednesday — but thanks to slashed federal funding and a shorter sign-up period, enrollees may see greater challenges this cycle.

• Gov. Greg Abbott in 2016 courted the McKesson Corporation with $9.75 million. Texas is now among those investigating the giant drug distributor's role in the growing opioid crisis.

• Should federal courts approve funding to explore new evidence that could toss out a death sentence? The U.S. Supreme Court examined that question Monday, via a Texas death penalty case.

• The FBI will roll out all of its JFK assassination files in the coming weeks. (Politico)

• The American Civil Liberties Union says it's going to sue if federal immigration agents don't release an undocumented girl who was detained after her gallbladder surgery by today. (The Dallas Morning News $)

• UT System Chancellor Bill McRaven has "no interest" in running for Texas governor in 2018. (The Houston Chronicle $)

• Two high-schoolers in the Houston area are suing their schools to be able to protest the Pledge of Allegiance. (The New York Times $)

"There’s been virtually no state role in extending the good or mitigating the bad."