Texas voters are pretty content with how all levels of government responded to Hurricane Harvey, per the latest University of Texas/Texas Tribune poll. Here's what you need to know:

• Safety first. Twenty-eight percent of Texas voters ranked debris cleanup and removal as the most important post-Harvey problem, while 26 percent said housing was the No. 1 issue for them after the storm. Public health and environmental contamination were ranked third and fourth, respectively. Other items, such as unemployment, transportation and public education are extremely or somewhat important to voters — but the priority across the board was making sure everyone is okay first.

• "Texans love how Texans did," as Jim Henson, co-director of the UT/TT poll and head of the Texas Politics Project at the University of Texas at Austin, puts it. Whether it was boat owners rescuing Harvey victims or rescue teams from around the state traveling to southeast Texas to help, 86 percent applauded the response of Texans after historic amounts of rainfall devastated swaths of the state.

• Texas voters liked how the government responded to the storm. Large majorities thought highly of local and state governments' actions, while 57 percent of voters said they approved of the feds' response. But the high approval ratings for state and local government come at a time of some rift between those institutions — just look at this year's legislative sessions and the fights that ensued over local versus state control.

What do you think is the most important post-Harvey problem? Tell us with #MyTexasTake on Twitter and Facebook.

• It's the second day of the Texas Federation of Republican Women's conference in Dallas. Patrick Svitek is your go-to for updates.

• A federal judge ruled earlier this week that a pregnant and undocumented immigrant could have access to an abortion, but that ruling is now up in the air and today a federal court in D.C. will hear the Trump administration's attempt to block it. Claire Allbright will be there.

• The Texas Criminal Justice Coalition is holding a news conference this morning to call for juvenile justice reform in the state. Jolie McCullough will be live-tweeting.

• Texas A&M University-Commerce offers a degree that can be completed for less than $10,000. So why doesn't it want freshmen to sign up?

• Environmentalists and free-market advocates are criticizing U.S. Energy Secretary Rick Perry's proposal to prop up coal and nuclear plants across the country. Some familiar with Texas politics wonder if Perry also would have opposed it when he was governor.

• After Hurricane Harvey ruined their homes, some — but not all — in southeast Texas could see a break in their property taxes. The gap has reignited intra-GOP tensions over disaster-related property tax re-assessments.

• The head of the Federal Bank of Dallas undercut Trump's NAFTA strategy in a speech to business leaders.

• Are Republicans in Congress making progress on tax reform? The Senate pushed the ball forward on that Thursday. (Associated Press)

• Proposals to soften marijuana laws have stalled at the Legislature, so reform is starting to take root at the local level. (Texas Observer)

• The city of Dickinson threw a clause into its contract for Harvey relief that stipulates grant recipients can't boycott Israel. The ACLU says that's unconstitutional. (The Houston Chronicle $)

• The Hutto Economic Development Corporation is under criminal investigation. It's unclear exactly why, but they recently sold option rights to a megasite and then bought them back for $275,000 — at taxpayer expense. (The Austin American-Statesman $) 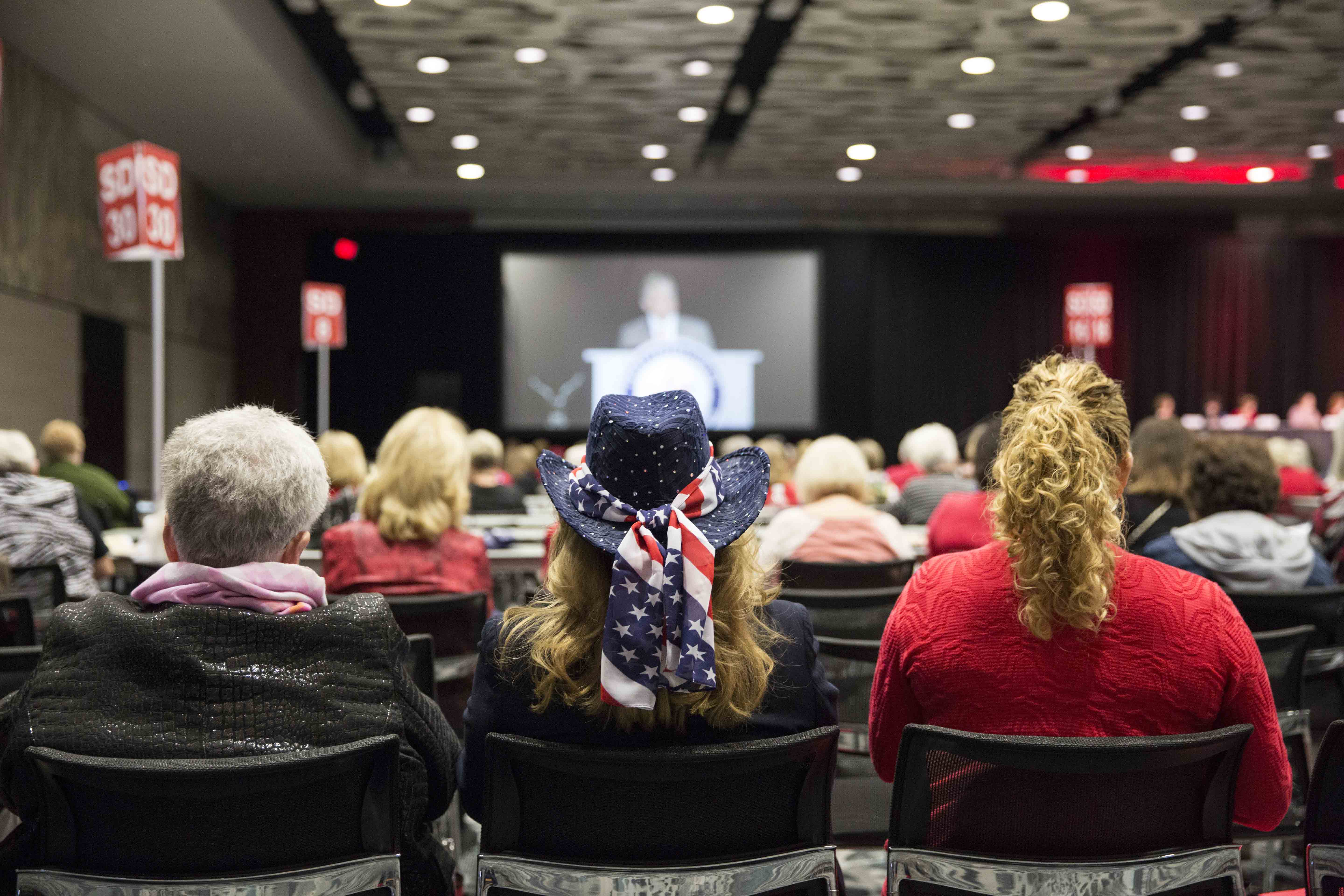 Attendees listen to speakers at the Texas Federation of Republican Women Convention in Dallas on Oct. 19, 2017. Photo by Laura Buckman for The Texas Tribune. See more photos on our Instagram account.

"More likely, if your job is being disrupted it’s because of technology."

— Robert Kaplan, president and CEO of the Federal Reserve Bank of Dallas, in a speech Thursday to members of the Texas Business Leadership Council.