It's interim for the Texas Legislature, but two state lawmakers appear to be staying busy as they fend off legal battles. Here's what you need to know:

• A criminal fraud trial against state Sen. Carlos Uresti, D-San Antonio, starts Monday. As the 85th regular session was wrapping up in May, a federal grand jury indicted Uresti on fraud and bribery charges over his role in a now-bankrupt fracking sand company he once held a financial stake in. The lawmaker, who's not up for re-election in 2018, unveiled a 171-person potential witness list Tuesday that's full of Republican and Democratic politicians, judges and lawyers who may appear in court to testify on behalf of Uresti's character.

• Who, me? Some on Uresti's line-up suggested they weren't aware of potentially being summoned to testify on his behalf. "First I've heard of it," Julián Castro, the former mayor of San Antonio, told the San Antonio Express-News in a text message. A district judge in Bexar County said, "That's the first time I've ever heard about it. I'm totally surprised." Another #txlege member, state Sen. John Whitmire, D-Houston, said by way of his chief of staff he was not aware he had been listed as a possible witness.

• The long-winding legal investigation into state Rep. Dawnna Dukes, D-Austin, is still underway — but the case's next step, the Austin American-Statesman reported Tuesday, depends on whether rules in the Texas House allow state lawmakers to accept travel pay, a pillar for the 12 counts of felony charges facing the 12-term lawmaker. Travis County prosecutors have an Oct. 30 deadline to decide whether to move forward with the charges against Dukes.

• The seventh execution in Texas this year is set to happen this evening in Huntsville. Anthony Shore, known as the "Tourniquet Killer," raped and murdered girls in the Houston area throughout the 1980s and 1990s. It took authorities more than a decade to unravel the cases, and a jury finally convicted Shore in 2004. The U.S. Supreme Court earlier this month refused his appeal of the execution, and Shore's sister recently told The Houston Chronicle that "he should be killed" for his crimes.

• From Ross Ramsey: The next tests of civic engagement in the state are coming up. But if history is any indicator, when Texans aren't engaged, they don't vote.

• The redistricting battle in Texas is nothing new. But what happens when the lawsuit outlives a voter who sued?

• Did you miss our conversation with four Texas Gulf Coast mayors on the impact of Hurricane Harvey? Watch the full video and check out a few highlights from the discussion.

• Following up on a story from The Austin American-Statesman ($) we shared yesterday, ICE is planning to ramp up federal immigration jails across the country — including Texas. (USA Today)

• The former Dallas County School Board president resigned Tuesday, more than three years before his term was set to expire. Some say he was urged to resign to save the agency, which faces a live-or-die referendum vote in November. (NBC DFW)

• Out of the state's 10 largest public universities, UT-Austin and the University of Houston are the only two still charging students for counseling sessions. (The Daily Texan)

• Canada and Mexico rejected U.S. demands on NAFTA, pushing negotiations on a possible deal into the first chunk of 2018. (Bloomberg)

• A Texas sheriff along the U.S.-Mexico border says a virtual border wall — not a physical one — is the way to go. (The Dallas Morning News $) 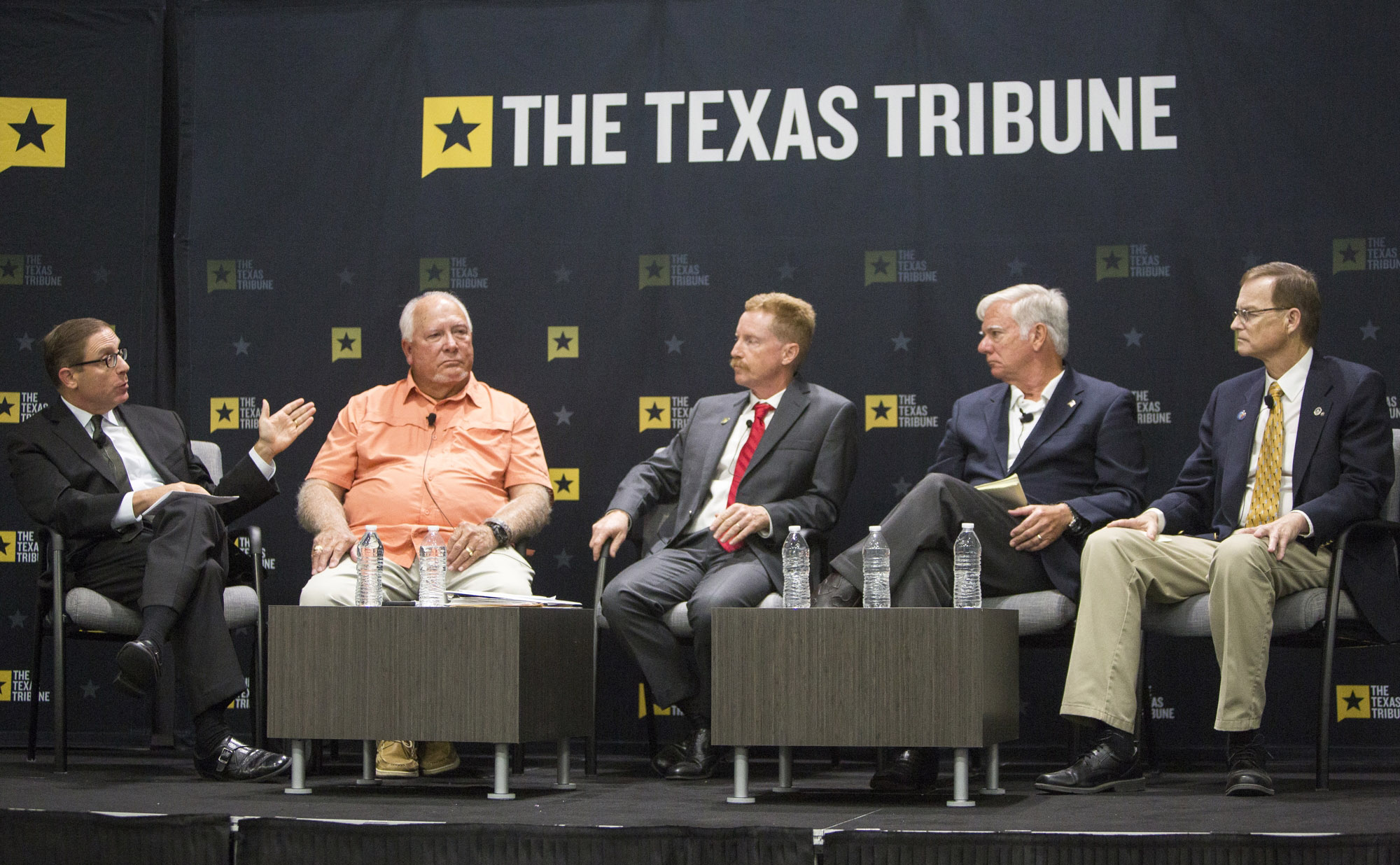 Texas Tribune CEO Evan Smith moderates a discussion with four Texas Gulf Coast mayors whose communities were impacted by Hurricane Harvey in Victoria on Oct. 17, 2017. Photo by Angela Piazza for The Victoria Advocate. See more photos on our Instagram account.

"You want to give this complicated legal analysis a human side, but you’re literally dragging the litigation so long that people are passing away. It’s nuts."

— Allison Riggs, a senior voting rights attorney with the Southern Coalition for Social Justice, on the long-winding redistricting battle in Texas outliving a voter who sued the state.