In light of two major floods this year and now the historic Hurricane Harvey, the state's water agency is crafting the first-ever flood strategy for Texans. Here's what you need to know:

• Earlier this year, the Texas Legislature voted to give the Texas Water Development Board $600,000 to start working on a statewide flood plan — and Harvey's record-breaking rainfall only underscored the need for one. The document will assess flood risks and map out projects local governments want to pursue to reduce them, plus what percent of the tab they want the state to pay for.

• The flood plan is set to cost billions of dollars, and the agency is aiming to put a wrap on it before state lawmakers meet at the Capitol again in 2019. The board is reaching out to local governments and residents soon to start conceptualizing local flood strategies and mapping out future infrastructure needs to sidestep flooding damage.

• In other Harvey news, the House Natural Resources Committee is holding a hearing in Houston today on the storm and ways to reduce flooding and pollution in affected areas. Texas Tribune reporter Kiah Collier will be bringing you updates. For a rundown that will help set the stage, read what happened at two other committee hearings earlier this week.

• The latest chapter in the securities fraud case against Texas Attorney General Ken Paxton is happening in Houston today, where both sides are meeting to discuss whether his trial should be delayed — for a third time — until prosecutors are paid. Here's a primer from Patrick Svitek, who you can follow for updates.

• From Ross Ramsey: Texas Supreme Court Justice Don Willett is running for re-election in 2018, even though he was appointed to a federal judgeship last week. But the federal gig won't be his until the U.S. Senate says so.

• Mark Cuban is "considering" a run for the White House in 2020 — and says he would have "no problem" releasing his tax returns, if he ran.

• The U.S. 5th Circuit Court of Appeals is concerned with Harris County's bail practices and an earlier court ruling that changed the system in Texas' most populous county.

• The U.S. Supreme Court has reduced a Texas death row inmate's sentence to life in prison.

• The city of Pasadena is staying under federal oversight for any changes it makes to its voting laws until 2023. That's the only setup of its kind in Texas.

Join us for a conversation on Hurricane Harvey and the Texas Gulf Coast with the mayors of Port Aransas, Victoria and Rockport in Victoria on Oct. 17.

• U.S. Sen. John Cornyn says he expects the White House to send Congress a DACA proposal as early as this week. (Politico)

• Democrats haven't won a U.S. Senate seat in ages, so why is Beto O'Rourke so upbeat? (Texas Observer)

• Hundreds of safe-deposit boxes filled with birth certificates, passports and other items flooded in Houston after Harvey. (Associated Press)

• El Paso County Judge Veronica Escobar is returning campaign donations from her chief of staff who was appointed to succeed her as she runs for a seat in Congress. (El Paso Times)

• More than 60 homeowners in Houston are suing two state agencies over what they say was "intentional flooding" from a dam over a 23-year period. (The Houston Chronicle $)

• A former cop in Garland is getting nine months' probation after he ended a car chase by shooting 41 bullets into a truck and killing the unarmed 25-year-old driving it. (The Dallas Morning News $) 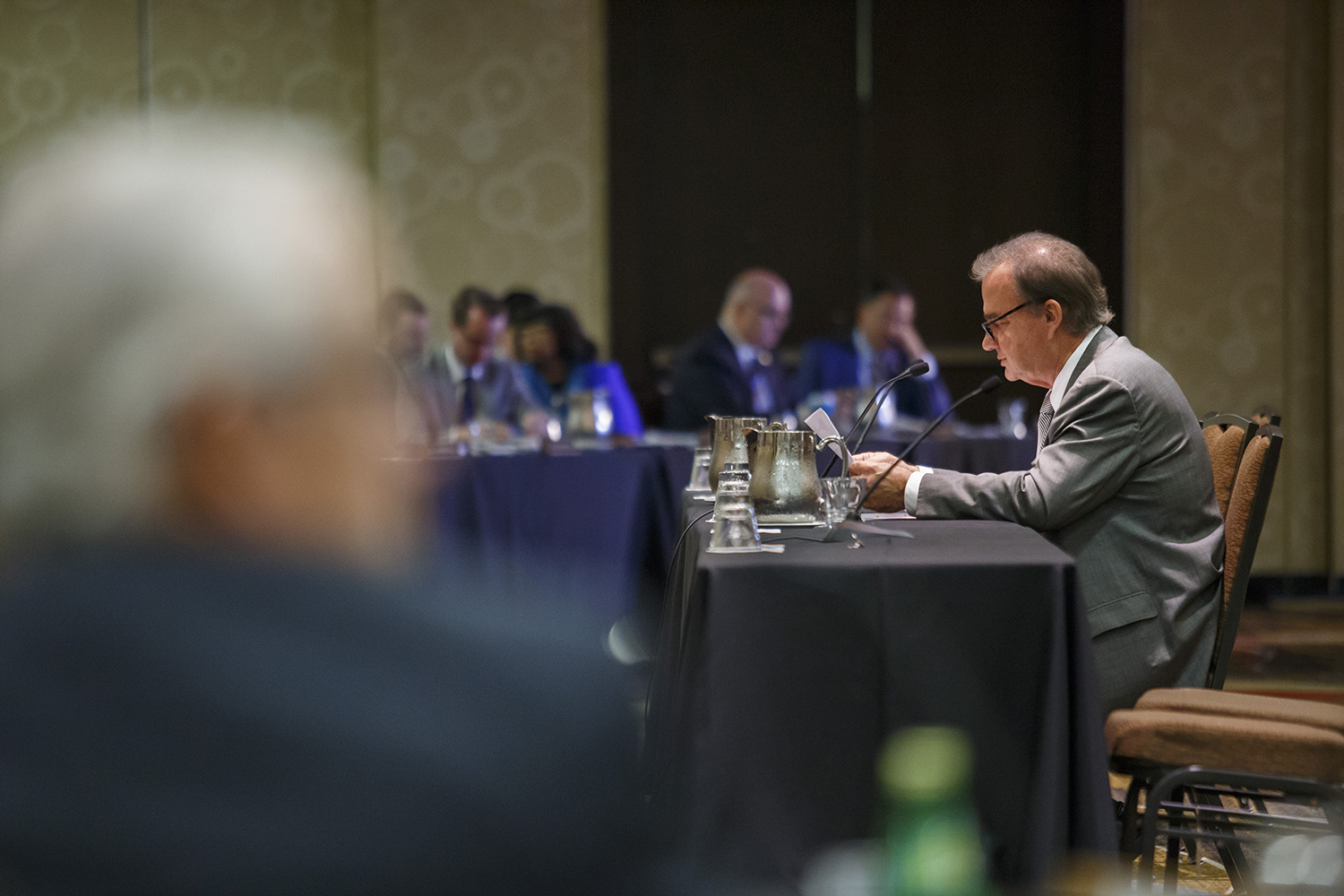 Texas A&M Chancellor John Sharp, the Harvey recovery czar, speaks to the House Appropriations Committee during a hearing on storm relief funding in Houston on Oct. 2, 2017. Photo by Michael Stravato for The Texas Tribune. See more photos on our Instagram account.

"If this [lawsuit] succeeds, the criminal justice system in every state in the United States will be thrown into chaos. The order has actually produced far more chaos than the flood has.”