More than 50 are dead in Las Vegas after a 64-year-old gunman fired on a crowd of music festival attendees outside the Mandalay Bay Resort and Casino in Las Vegas, making it the deadliest mass shooting in modern United States history according to the Associated Press. At least 200 other people are injured. The shooter is dead. Here is what we know so far:

• Police have identified the gunman as Stephen Paddock, a 64-year-old man. According to The New York Times, police are still looking for a woman named Marilou Danley who they described as a "companion."

• Eye witnesses, photos and videos from the concert depict a harrowing scene. In a video posted on The New York Times' website, quick and continuous bursts of gunfire can be heard. “It just kept coming,” one witness said. “It was relentless.”

• Texas officials are beginning to offer their prayers and condolences online. "Lifting up in prayer all impacted by last night's despicable shooting in Las Vegas & all 1st responders on the scene," U.S. Sen. Ted Cruz tweeted.  "May God be with the families of those who have been killed and comfort them in their time of mourning," Texas Agriculture Commissioner Sid Miller said on Facebook.

For updates today, watch this updating story from The New York Times. Follow our reporters for news as Texas officials react.

The sprawling Texas Health and Human Services Commission is in the news again — this time, over long-time employees leaving en masse and the agency's response to Hurricane Harvey. Here's what you need to know:

• Meet Charles Smith, who Gov. Greg Abbott appointed as executive director of the commission in 2016, a time when the agency was at the tail end of a crisis period. Under Smith's leadership, dozens of experienced senior staffers have left the agency — and current and former employees point to his lack of technical knowledge and his pushing of a political agenda backed by Abbott as a key source of frustration.

• We talked with 11 current and former long-serving staff at the commission. They depicted an agency floundering as veteran staff have regularly clashed with Smith as well as those who back him in the governor's office. The wave of resignations have left the agency with a gap that's hampered its ability to help Texans affected by Harvey, according to critics.

• On the flip side, Abbott and other supporters see Smith as a strong leader who has brought a new era to an agency in need of a fresh start. The commission is currently in the midst of an overhaul, merging with two other state agencies and restructuring its leadership ladder after the Texas Legislature ordered it in 2015. “Whenever there is a change in the status quo, there are bound to be individuals that are displeased,” an Abbott spokesperson said in an email, adding that the "agency was riddled with scandals" when Abbott entered office, which spurred action to revamp trust and accountability. Smith declined to be interviewed for our story.

• Need proof of dysfunction? Critics point to Harvey, where some argue the agency has been slow to offer guidance or assistance to storm victims who qualify for items such as food stamps and Medicaid. The commission didn't have its first rollout of disaster food stamp benefits until weeks after Harvey made landfall — and areas that suffered some of the most extensive damage were not included. Compare that to 2008, when Hurricane Ike struck Galveston and the agency announced the launch of an emergency food stamp program within days. "This stuff is not rocket science," one former commission official told us. "We've had disasters before. There are templates for this."

• The House Urban Affairs Committee is holding a hearing in Houston today to discuss housing issues after Harvey. Texas Tribune reporter Brandon Formby is your go-to for updates.

• From Ross Ramsey: Some Republicans in the Texas House are talking about their caucus voting as a bloc for the next speaker of the House election. It isn't a new idea. The problem? There's not really a way to enforce it.

• The next step in Harris County's legal battle over bail practices is happening Tuesday morning. Officials involved in pretrial processes across Texas are holding their breath.

• U.S. Sen. Ted Cruz was in Texas over the weekend, where he told conservative audiences he too is frustrated with GOP inaction in Washington under President Trump.

• The federal government recently said 21 states — including Texas — were targeted by Russian government hackers ahead of the 2016 presidential election. A top Texas official is disputing that the state belongs on that list.

• Hey, Texans — we want to hear about your experience with college student housing. Tell us your story.

• One of the most hazardous Superfund sites in Houston is now contaminated with toxic waste, thanks to flooding from Harvey.

• Did you miss our conversation with Harvey recovery czar John Sharp on Friday? Catch up here.

• People in Amarillo are torn over what to do about Confederate symbols. (Amarillo Globe-News)

• Two football players at a Houston-area private school were kicked off the team after they knelt and raised a fist during the national anthem. (The Houston Chronicle $)

• Gov. Abbott's incoming chief of staff was a top lobbyist in Texas less than a month ago. (San Antonio Express-News $)

• There's a church in Austin that says it won't hold weddings until it can marry same-sex couples. (The Austin American-Statesman $) 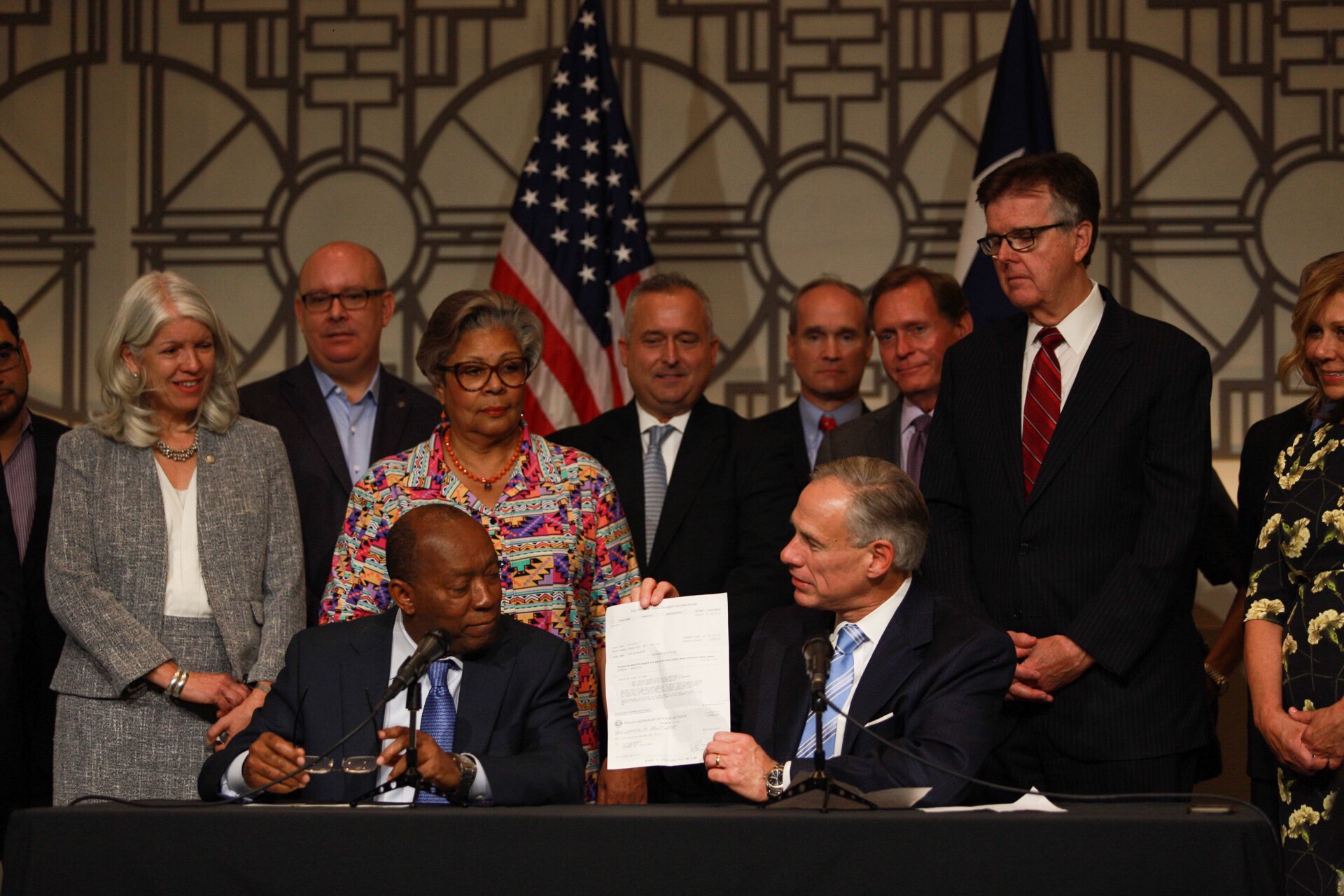 "Am I the only one here frustrated with Congress?"

— U.S. Sen. Ted Cruz, R-Texas, in a pair of appearances before Texas Republicans over the weekend.

Disclosure: The Texas Public Policy Foundation has been a financial supporter of The Texas Tribune. A complete list of Tribune donors and sponsors is available here.