Just like that, parts of the state's "sanctuary cities" ban that a federal district judge halted last month are set to go into effect. Here's what you need to know:

• A panel of three appellate judges ruled on Monday that provisions of the state's immigration enforcement law, known as Senate Bill 4, are clear to go into effect while the case plays out on appeal. Last month, U.S. District Judge Orlando Garcia temporarily halted key parts of SB 4, including a provision that requires jail officials to honor all detainers.

• But hold on: The 5th Circuit also said in its ruling Monday that portions of SB 4 that prevent "materially limiting" cooperation with ICE officials are too vague, holding that the word "limit" could be too broadly interpreted and leaving a decision on that up to the next panel of judges. The trio also gave a mixed signal on another controversial part of the bill that prevents local governments from "adopting, enforcing or endorsing" policies that specifically stop or limit enforcing immigration laws. They kept that injunction in place — but said it only applies to the word "endorse."

• After the ruling, Texas Attorney General Ken Paxton praised it and said his office was confident the entire bill will be found constitutional, while Democrats and immigrant rights groups said the state was utilizing delay tactics to disenfranchise minorities in the state. Also of note: Travis County Sheriff Sally Hernandez confirmed her office would comply with enforcing ICE detainers — which is quite the policy shift from earlier this year, when she announced in January her office would reduce its cooperation with immigration enforcement officers. If you remember, that led to a public back-and-forth between her and Gov. Greg Abbott, who eventually cut off funding for Travis County programs.

• Are you confused? The legal challenges on SB 4 are complicated; a hearing on the state's appeal of Garcia's ruling is set for Nov. 6 — but the judges ruled that the detainer provision can stand to an extent, for now. The judges' ruling on Monday will probably stick around for several months, until the 5th Circuit decides SB 4's full fate.

• Abbott is getting briefed on Hurricane Harvey at 1:30 this afternoon with Harvey recovery czar John Sharp and other state lawmakers. He will hold a news conference afterward.

• The mayor of Houston sat down with the Tribune to talk about the city's on-going relief efforts after Harvey.

• Texas Tech's president has felt pressure from both sides of the political spectrum. Here's how he juggles free speech and political polarization.

• Several Texas officials are denouncing the NFL over national anthem protests — plus the entire Dallas Cowboys football team took a knee prior to the national anthem during a football game Monday night.

• City and state officials in Houston are sparring over who should cover which Harvey recovery costs — and when those funds should be disbursed.

• The highest criminal court in Texas has waded into the long-running dispute over the prosecutors' pay in the securities fraud case against Attorney General Ken Paxton.

• The state has one of the highest child marriage rates in the nation. A new state law is trying to change that.

• Here are the best moments from this year's Texas Tribune Festival podcasts.

• Even though Texas' murder rate went up again last year, it still is relatively low.

• A threatened lizard species may have 10 percent of its habitat destroyed thanks to sand mining operations in West Texas, an advocacy group says.

• The GOP's latest health care bill now has three hard no votes, which all but dooms the legislation's chances. But some GOP senators are already eyeing their next prospect to revive an Obamacare repeal. (Politico)

• Texas Monthly with a run-down on who's running for governor so far in 2018.

• A port of entry along the U.S.-Mexico border isn't charging tolls for a year. (El Paso Times)

• The U.S. Equal Opportunity Commission is suing Whataburger for allegedly discriminating against black people in its hiring process. (The Houston Chronicle $) 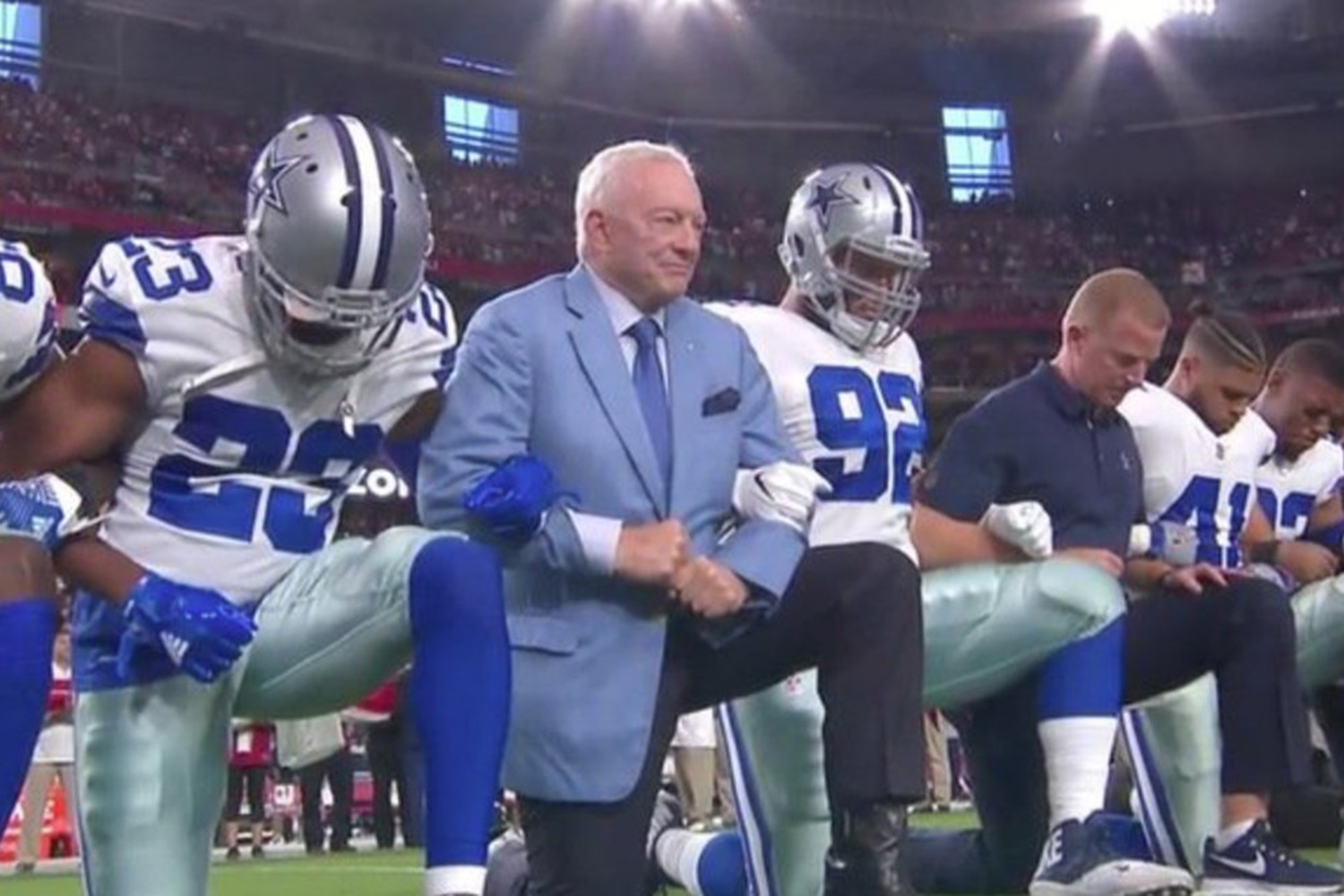 The entire Dallas Cowboys football team and owner Jerry Jones takes a knee prior to the national anthem during a game against the Arizona Cardinals on Sept. 25, 2017. Photo by the Dallas Cowboys Twitter account. See more photos on our Instagram account.

"Everyone needs to act with a degree of urgency. We’re still waiting on the money. People do not build projects without money."

— Houston Mayor Sylvester Turner, when asked if the Houston-area’s congressional delegation has done everything it can to mitigate damage from major rain events.