What you need to know, part I

State officials spent much of Monday bracing Texans for the long, costly road to recovery from the devastation of Hurricane Harvey. Here's what you need to know:

• After declaring a disaster in 54 Texas counties — which hold 41 percent of the state's 27.9 million people — Gov. Greg Abbott announced Monday he had deployed the entire Texas National Guard in response to Harvey. That's now 12,000 state personnel who have been activated for rescue efforts. Meanwhile, shelters in cities such as San Antonio and Austin are filling up, and Dallas has started receiving evacuees affected by the storm.

• Harvey's havoc has brought a new state insurance law under scrutiny. If you want to file a weather-related insurance claim, you have good reason to want to file it by Friday. After that, a law passed during this year's regular legislative session goes into effect that will lower penalty fees that insurance companies face if you have to sue them for late payment.

• Congress is likely to approve federal funds for recovery from the storm — but some northeastern lawmakers are none too pleased with their Texan colleagues. Those lawmakers remember how, after Hurricane Sandy blew through New York and New Jersey in 2013, almost every Texas Republican in Congress voted against a $50.5 billion aid bill. Though most from the region said they'd approve aid money for Texas, several federal lawmakers took to Twitter to decry what they saw as hypocrisy from the Texas delegation.

• President Donald Trump will be in Corpus Christi and Austin today, where he's set to get an update on relief efforts with state leaders. During a news conference Monday, Trump promised Texans would get federal funding for rebuilding efforts — plus he mentioned he may be back in town again on Saturday. "They're saying [Harvey is] like the biggest ever. It's historic. It's like Texas. It's really like Texas, if you think about it," he said. Follow Texas Tribune reporter Patrick Svitek for updates today.

What you need to know, part II

The U.S. Supreme Court pressed the pause button on a lower court's ruling that found Texas' congressional map intentionally discriminated against minority voters in the state, saying they wanted to hear from the groups suing Texas before the state's appeal moves forward. Here's the skinny:

• Yesterday's SCOTUS order wasn't necessarily a win for either side in the case. The high court could still order a new map once they hear from minority groups, or they could block a three-judge panel's unanimous ruling that two of Texas' 36 congressional districts violate the U.S. Constitution and federal Voting Rights Act. If the Supreme Court sides with plaintiffs in the case, multiple congressional races statewide could be affected; if they side with Texas, the state could be allowed to use its current congressional map for the 2018 elections.

• Remember what the issue's about: GOP leaders want the congressional map that has been used the past three election cycles to remain in place, while Democrats, civil rights and minority groups want it redrawn because they think it is discriminatory toward black and Latino voters in the state. A panel of federal judges in San Antonio has sided with the latter section on two counts — first on Texas' congressional map and second on the state House map, which Paxton has said he also plans to appeal.

• There's still an open question on the table: Will the battle over Texas' political maps delay the 2018 election cycle?

• A federal judge is considering whether to halt the state from enforcing a ban on the most common second-trimester abortion procedure today, just days before the ban is set to go into effect. Follow Texas Tribune reporter Shannon Najmabadi for updates.

• Here's how to get (and offer) help to Texans after Harvey.

• What should Houston leaders do to prevent future flooding disasters? Tribune reporters Neena Satija and Kiah Collier give their take.

• Northeastern politicos aren't too thrilled with GOP congressmen from Texas — especially the ones who voted against a spending package for Hurricane Sandy in 2012 but now want federal aid for Harvey.

• You have a few days left to file a weather-related insurance claim if you don't want to avoid penalties, thanks to a new state law going into effect Friday.

• Find out how your university has fared amid Harvey.

• The federal official heading Harvey relief efforts is asking "for all citizens to get involved."

Join us on Aug. 30 for a conversation with state Sen. Bryan Hughes, R-Mineola, and state Rep. Gary VanDeaver, R-New Boston, at Texarkana College.

On the horizon — Add hurricane aid to the GOP's plate when they return to Washington in September. (Politico)

In other news, North Korea fired a missile over Japan in what's being called an "aggressive test-flight." (Associated Press)

A former staffer at Baylor University wants $750 million from the school in a Title IX lawsuit. (Waco Tribune-Herald)

The city of Houston is looking at a $2 billion bond election. (The Houston Chronicle $)

Julián Castro, former housing chief and San Antonio mayor, is teaching at The University of Texas at Austin this semester. (The Austin American-Statesman $)

The San Antonio City Council is voting on Thursday whether to remove a Confederate statue from one of the city's public parks. (San Antonio Express-News $) 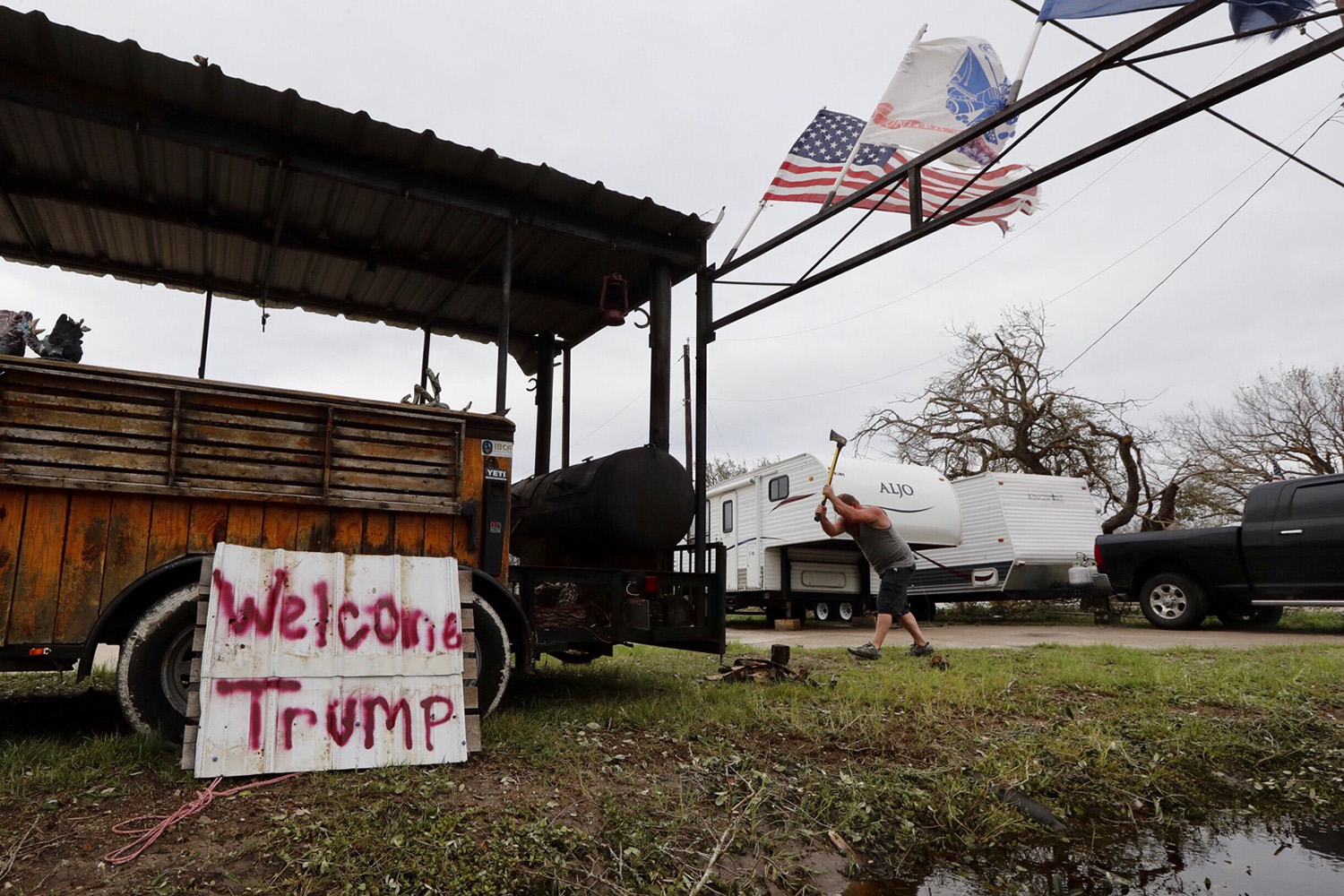 A sign welcomes President Trump as Jeremiah Reid chops wood in hurricane-ravaged Rockport on Aug. 28, the day before Trump is scheduled to visit the area. Photo by Bob Daemmrich. See more photos on our Instagram account.

"I spoke with the president — he just said, 'Ted, what do you need, what does the state need? The answer is yes.'"