With a 29-day special session in the rearview mirror, we should find out today whether the Texas Legislature is coming back for more — but this time, to draw a new congressional map for the state ahead of 2018 elections. Here's what you need to know:

• Let's go back to 2010, which is when this fight over Texas' political maps began. Fresh census data had just come out, and the GOP-controlled Legislature drew new state and congressional boundaries. But minority rights groups and activists immediately took issue with them, calling the new maps discriminatory toward black and Hispanic voters in the state. A San Antonio federal court stepped in and drew temporary maps ahead of the 2012 elections, and the state has been using them ever since. The issue reignited this spring though, when the same three judges in San Antonio dealt two blows to the state — first ruling that three of Texas' 36 congressional districts were unconstitutional, then taking issue with the state's House map soon after.

• Now flash forward to Tuesday, when the San Antonio judges invalidated two of Texas' congressional districts and told the state they had until Friday to decide whether they wanted the Legislature or the court to redraw the political map ahead of the 2018 elections. The districts that need fixing, judges told the state, are Congressional District 27 — represented by U.S. Rep. Blake Farenthold, R-Corpus Christi — and Congressional District 35 — which Austin Democrat Lloyd Doggett represents. But regardless of whether it's lawmakers or the court drawing a new map, multiple congressional races across the state could be impacted in 2018.

• So ... Another special session? It's hard to say — but there's been no evidence so far to suggest Gov. Greg Abbott — the only official in the state who can call lawmakers back for more — is itching to call another round of overtime. The governor in a recent interview with KXAN said he's been working with Attorney General Ken Paxton to appeal what he called an "unconstitutional ruling" to the U.S. Supreme Court. And Paxton, in a statement after the Tuesday ruling, echoed a similar sentiment, saying his office looked "forward to asking the Supreme Court to decide whether Texas had discriminatory intent when relying on the district court."

• It's worth noting: Lawmakers at the Capitol during the regular session didn't spend a lot of time thinking about ways to fix either the state's embattled congressional or House map, and Paxton said earlier this year he wasn't interested in a special session on redistricting. But Texas Republicans in D.C. felt quite differently, and some of them told us in May they hoped Abbott would order lawmakers to redraw the congressional lines because they thought it could circumvent the possibility of federal judges drawing their own map. If the Legislature does end up drawing a new map, it would up the likelihood that the next election cycle could be delayed.

• The court only ruled on the state's congressional map — leaving questions surrounding the legality of the Texas House map unanswered. The judges could issue a decision on that any day.

• The "bathroom bill" may be dead for now, but that's not stopping one group of Houston-area pastors from already gearing up for the next fight.

• And Texas has violated another voting law, a federal court found.

• What have the closest elections been in recent history, and what could that mean in 2018?

• The University of North Texas System has picked a new chancellor. She's a top administrator at NASA – and will be the first woman to hold the top post at the system.

The state's new "sanctuary cities" law is set to take effect Sept. 1 — and police chiefs in Texas are starting to adapt to it. (AP)

After she lost the San Antonio mayoral runoff in June, Ivy Taylor filed for unemployment benefits from the city. (San Antonio Express-News $)

The special session left the Texas Legislature just as divided as when it began. Now both political parties have more ammunition for 2018 elections. (The Dallas Morning News $) 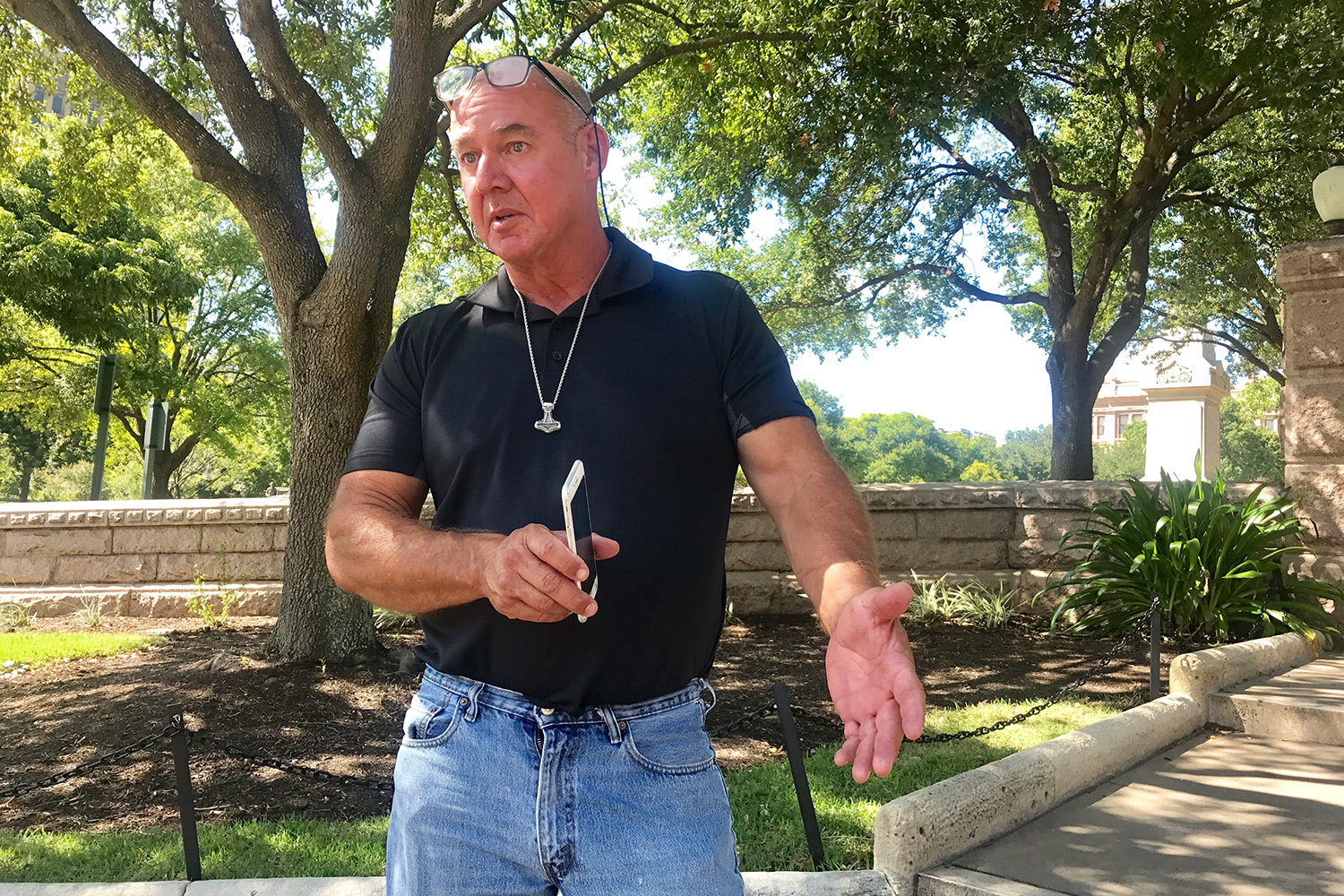 White nationalist Preston Wiginton at a news conference at the Texas Capitol on Aug. 17. Photo by Bob Daemmrich. See more photos on our Instagram account.

— Steve Riggle, a pastor and member of the Pastors Council, referring to the fact some Republicans in the Texas House didn't support the "bathroom bill" during the regular and special sessions.