A lot has happened these past few days — even if you only include the words "white nationalists" and "Texas A&M University." Here's what you need to know:

• The sentiment that sparked a violent white nationalist rally in Charlottesville, Virginia, over the weekend washed into Texas when Preston Wiginton announced Saturday he was planning a "White Lives Matter" rally in September at Texas A&M University. Wiginton, who's tried for years to get students on campus to come to his events, noted the infamous "alt-right" leader Richard Spencer would be there — and the news generated outrage on social media. Students at the university were quick to counter with a planned protest of their own, and state lawmakers at the Texas Capitol spent part of Monday holding a moment of silence for Charlottesville and urging A&M to cancel the event.

• But on Monday afternoon, A&M announced it was canceling the rally. The decision came after university President Michael Young and A&M System Chancellor John Sharp met with other university leaders and law enforcement officials Monday. The school said in a statement it was concerned about student safety and pointed to Charlottesville as the type of event they were hoping to avoid. Gov. Greg Abbott said he had a hand in the decision, too — the governor's office said it worked with school leaders "to prevent the type of hate-filled event that we saw in Charlottesville," per a spokesperson, who added that "Abbott's top goal is to ensure the safety and security of Texans and Texas A&M students."

• The event may not be happening, but legal challenges might. Since A&M is a public university, an event can't be barred just because of the views of its organizer. And Wiginton told the Tribune on Monday that the university could expect legal action soon. "I guess my lawyers will now be suing the state of Texas," he said, adding, "We have two lawyers in Texas who are alt-right-leaning who will get in on the action, too."

• The House is in at 2 this afternoon, and the Senate meets at 4:30. The first called special session ends Wednesday, so expect lawmakers to continue negotiating on priorities such as property tax legislation and school finance today. Need a quick run-down of where things stand as the finish line comes into sight? Read Texas Tribune reporter Patrick Svitek on the high-stakes negotiations still pending on a pair of big-ticket items.

• The Senate pulled a switcharoo on a controversial tree regulating bill, rolling back a pair of amendments it made to the bill at the behest of House Speaker Joe Straus.

• The special session's stalemate on school finance came closer to ending Monday as both chambers tentatively passed each other's priority bills on the issue.

• When lawmakers passed a property tax measure, long-brewing tensions within the GOP ignited on the House floor.

• A lizard species in West Texas may be in trouble, thanks to companies that use the area for hydraulic fracturing.

We're hosting a live recording of the TribCast at the Austin Club this morning! Join us at 7:30 a.m. or watch the livestream here.

U.S. Attorney General Jeff Sessions said he's launching an investigation into the deadly violence in Charlottesville over the weekend. (Politico)

A doctor in Texas created a system that identifies neighborhoods and other areas to try stopping child abuse before it can happen. (AP)

School's back — and so is tuberculosis at a high school in Fort Bend County. And more than 100 kids who haven't been tested yet are barred from going to class because of it. (The Houston Chronicle $)

U.S. Congressman John Carter, a Republican from Round Rock, is running for re-election in 2018. (The Austin American-Statesman $)

State Rep. Pat Fallon said a bill he filed to protect drivers who injure protesters wouldn't apply to the 'jackass' in Charlottesville. (The Dallas Morning News $) 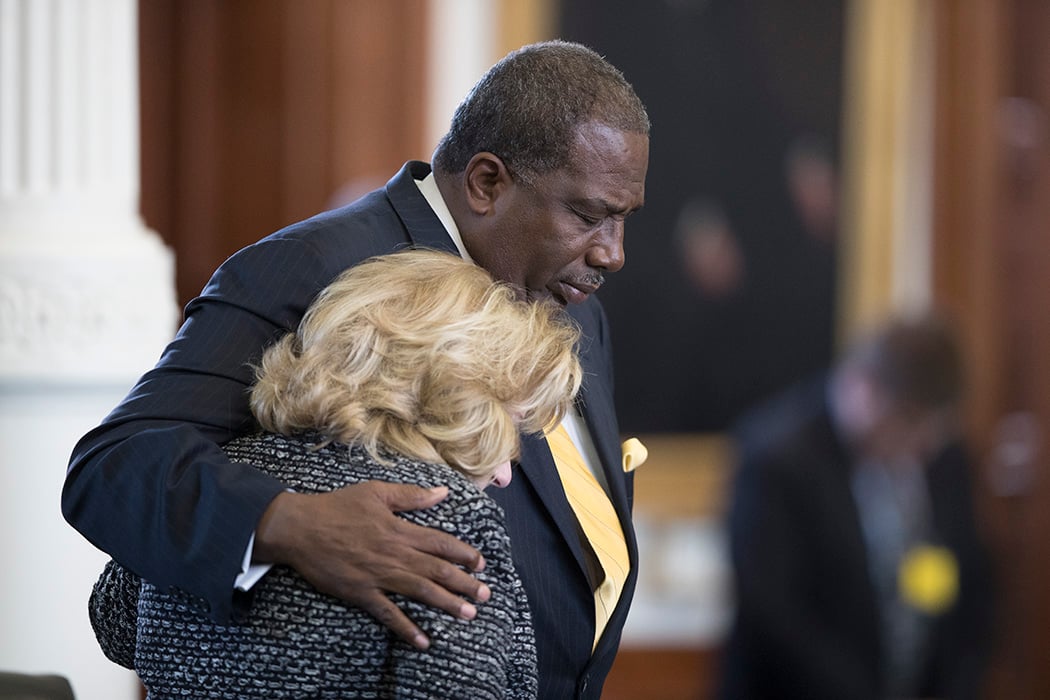 State Sens. Royce West, D-Dallas, and Jane Nelson, R-Flower Mound, prayed for the victims of the violence in Charlottesville, Virginia over the weekend on the Senate floor Aug. 14. Photo by Bob Daemmrich. See more photos on our Instagram account.

— State Rep. Helen Giddings, D-DeSoto, denouncing the actions of white nationalists in Charlottesville over the weekend.

Disclosure: Texas A&M has been a financial supporter of The Texas Tribune. A complete list of Tribune donors and sponsors is available here.