Texas has more kids than ever who are eligible to receive free summer meals — so why is the state feeding fewer kids? No one can pinpoint the exact cause, but one possible reason is a lack of transportation. Here's what you need to know:

• A quick explainer: Texas in 2011 passed a law requiring school districts to offer students free meals for at least 30 days during the summer, if at least 50 percent of their kids are eligible for free and reduced school lunches. But the state's participation fell last summer after peaking in 2013, when the average number of kids being served daily meals in July 2016 dropped 20 percent from the previous July. On top of that, the average daily number of Texas kids who couldn't afford meals during the school year increased to 2.4 million between 2015 and 2016. Kids in areas with high rates of hunger are likely to eat unhealthy or cheap food — if they're eating at all — and educators and experts say it's crucial to find better ways to get meals to students, or the other way around.

• Take El Paso ISD, which in an effort to save money in a tight budget last year lowered the number of school meal sites at its schools. They served around 20,000 fewer lunches between June and August 2016 than the year before, per state data, and this year, the district cut back on its July summer enrichment program at several campuses — which meant less students were bused to the schools. “If you have programs and kids are busing in for programs, they’re there and they eat," said one district official. "If there are no buses or transportation ... kids can’t get into the programs and don’t eat.”

• But attempts are being made to reverse the trend. After serving around 50,000 fewer lunches during the summer of 2016 than the summer before that, Houston ISD attempted a 180 by getting creative with its advertising. They spent $20,000 on banners in schools in the area and plastered decals on delivery trucks driven around the city. In Dallas ISD, which served around 13,000 fewer lunches in the summer of 2016 than 2015, administrators are now considering ways to bring the meals to the kids, and other districts are partnering with community groups to serve meals closer to where kids spend their time, such as parks or community pools.

• While the Senate isn't due in the chamber until Thursday, the House gavels in at 10 a.m. today, where they're set to consider bills aimed at overhauling the tax appraisal process and lowering the amount of taxes Purple Heart recipients must pay. Follow Andy Duehren for updates.

• Lt. Gov. Dan Patrick's comments last night about wanting "better communications" with the House underline the current backdrop — the House-Senate tensions that were present during the 140-day regular session have remained for the special session, especially as state lawmakers pass the halfway point of the 30 days they are allotted.

• From Ross Ramsey: Texas lawmakers say they'd like to lower your property taxes — oh but wait, none of the proposals at the Capitol during the special session would do that.

• U.S. Rep. Mike Conaway planted the seeds this week for passing a massive bill next year that thousands of farmers in his district are counting on.

• The Travis County District Attorney's office offered to drop all corruption charges against state Rep. Dawnna Dukes if she resigned from the Texas Legislature. Dukes didn't take the deal.

• "My door is open. The speaker has my phone number," said Lt. Gov. Dan Patrick Tuesday night, adding he wanted "better communications" with the House.

• Could the state's new immigration-enforcement law, set to take effect Sept. 1, do billions of dollars in damage to the Texas economy? For sure, say some in the state's business, local government and higher education sectors.

• The Texas House approved taking more than $200 million from the state's emergency savings pot to put toward a retired teachers' health care fund.

• A congressional panel cleared Texas Congressman Roger Williams from their investigation into whether he benefitted from legislation he supported.

• Hey, Texans — We're crowdsourcing for the next story in Power Trips, a series exploring your thoughts on the fight between state and local officials over regulatory power. Next up, we're tackling property taxes — and how people feel about those rates. To participate, fill out our short form here.

Join us for coffee and a conversation on property taxes with state Sens. Paul Bettencourt, R-Houston, and Kirk Watson, D-Austin, on Friday, Aug. 4. 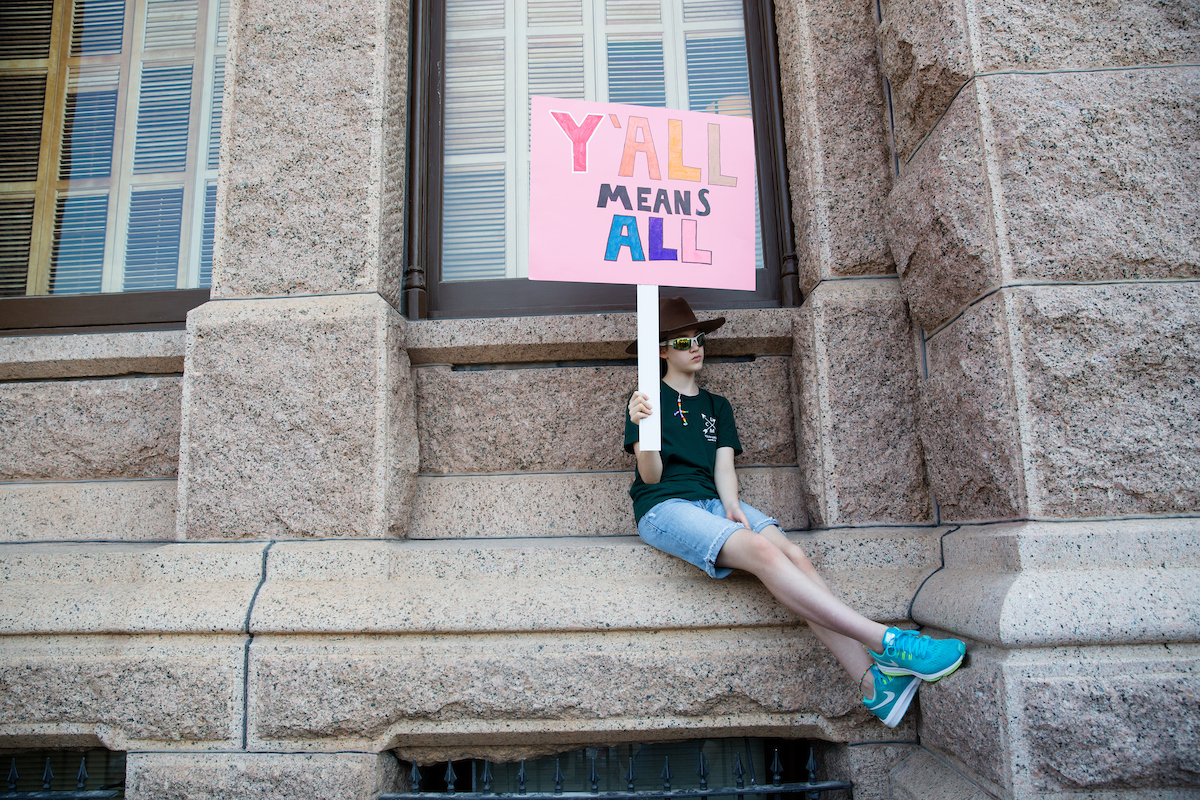 Members of various faith communities met at the Texas Capitol on Aug. 1 to speak out against the "bathroom bill." Photo by Austin Price. See more photos on our Instagram account.

"[House Speaker Joe Straus] knows where I am most of the time. I don't care about our differences. I don't care anything that's been said in the past. I want to sit down and find a way to complete the governor's agenda."

— Lt. Gov. Dan Patrick, about wanting better communication with the House during the special session.