Good news: We survived the first day of the special legislative session. Bad news: There could be 29 more days to go. And if Monday was any indication, the next few weeks could be a bumpy ride. Here's what you need to know:

• First things first: Sunset legislation. Lawmakers can't act on the 19 other items on Gov. Greg Abbott's special session wishlist — including the "bathroom bill" and school finance reform — until after they send must-pass legislation keeping several state agencies afloat to his desk. So it came as no surprise that the Senate spent Monday fast-tracking legislation to keep the Texas Medical Board and a few other state agencies alive. Over the protests of Senate Democrats, who argued fast-tracking the legislation would deny public input, the upper chamber shot the two bills to a committee, where they were unanimously approved within the hour. Things are moving fast; while the Senate is expected to vote that legislation out today, a House committee is set to consider its version of that bill after the lower chamber adjourns for the day. Follow Texas Tribune reporter Andy Duehren for updates.

• Protests and provocation. Amid press conferences and protests on Monday, a crowd gathered on the Capitol steps to protest Abbott's special session agenda. State Rep. Chris Turner, chairman of the House Democratic Caucus, warned that the summer heat in Austin — which felt like 105 degrees Monday — was "nothing compared to the heat" Democrats would bring in the 2018 general election. Earlier in the day, state Rep. Tony Tinderholt, R-Arlington, wondered aloud on the House floor what could be done to stop some lawmakers — Democrats, cough, cough — from leaving town to bust quorum and send the chamber to a standstill. He's already filed a resolution that would penalize anyone who tried to do so. House Speaker Joe Straus replied that the chamber could consider that hypothetical if it happened.

• Day 2 begins at 10 a.m. in the House and 1 p.m. in the Senate. But before things at the Capitol kick off for the day, join us this morning in Austin for a #txlege special session preview with state Reps. Carol Alvarado, D-Houston; Drew Darby, R-San Angelo; and Matt Schaefer, R-Tyler. Watch the livestream here, and follow Texas Tribune reporter Emma Platoff for updates.

• From Ross Ramsey: When the governor hasn't publicly made his positions clear on the 20 things he's tasked lawmakers to work on during the special session, how do they know how to vote?

• The state lawmaker playing point on legislation to relax construction permitting rules during the special session also has close ties to the industry.

• President Trump's justice department says Texas should be trusted to properly educate its voters on new ID rules ahead of the 2018 election — even though they didn't do great last time around.

• After promising for seven years to repeal Obamacare, congressional Republicans' efforts to do just that collapsed. There was a lot on the line for Texas' two senators.

• It's rare for police officers in Texas and across the nation to face criminal charges — which is why it came as such a surprise that a Texas police officer who killed an unarmed black teenager has been charged with murder.

If your school property taxes are too high for the next two years, thank Abbott and Patrick, Texas Monthly 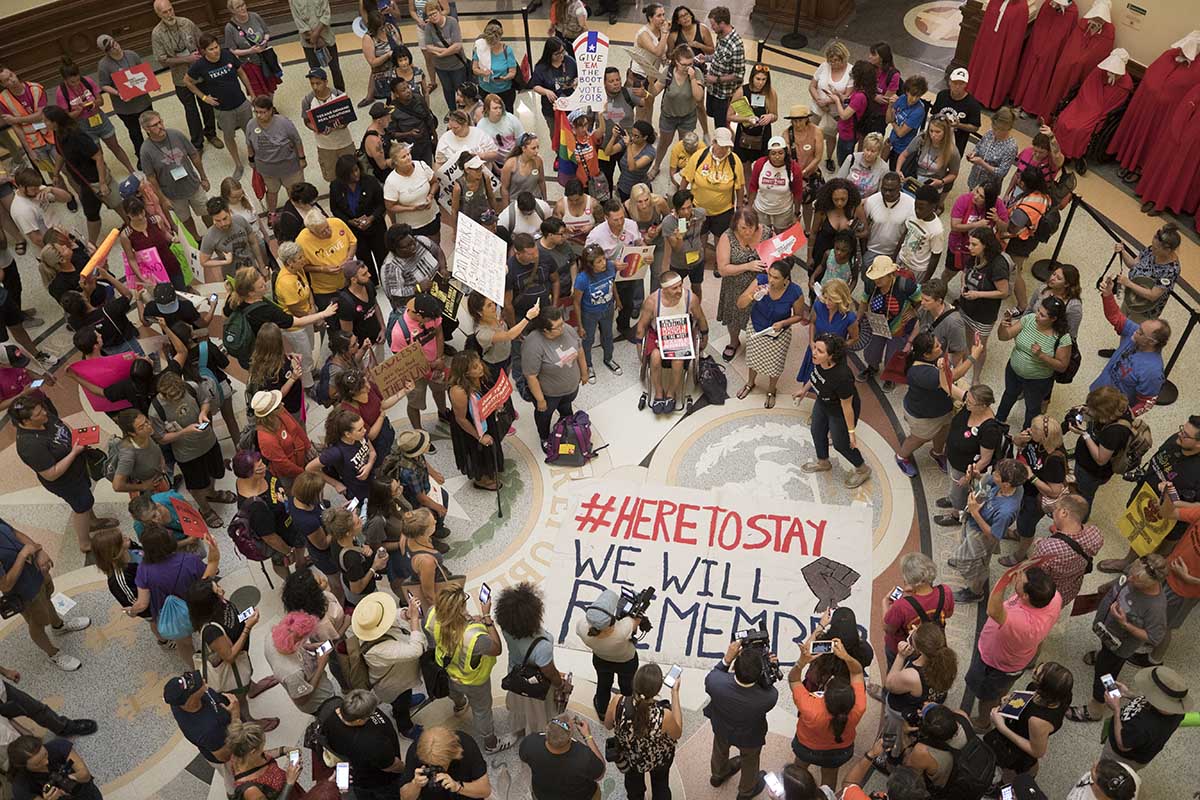 Protesters crowd the Capitol rotunda on July 18, 2017, the first day of the special session called by Gov. Greg Abbott to address unfinished business of the 85th Texas Legislature. Photo by Bob Daemmrich. See more photos on our Instagram account.

"In general, the consensus is, 'You guys have been making this promise for seven years to repeal Obamacare ... If you guys can't achieve it then why did we send you to Washington?'"

— Brendan Steinhauser, a Texas-based GOP political consultant, on what the apparent collapse of the GOP health care bill could mean for Republicans in 2018.