Nearly two years after Sandra Bland died in a Waller County jail cell, a judge on Wednesday dropped a perjury charge against the ex-trooper who arrested Bland after stopping her for failing to signal a lane change. Here's what you need to know:

• Bland's death sparked outrage. In July 2015, Bland, a 28-year-old black woman from Illinois, was pulled over by then-Department of Public Safety Trooper Brian Encinia for not using her turn signal to change lanes. The two argued, which led to Bland's arrest. She was found dead in a Waller County jail cell three days later, ruled a suicide by hanging. Bland's death drew protests and calls for a new county jail and body cameras in the following months. A grand jury indicted Encinia last January after he allegedly lied in his report he filed after Bland's arrest, but a state district judge dropped the charges at the prosecution's request after Encinia — who originally tried to fight his job termination — vowed to hand over his police license and never work in law enforcement again.

• Activists called for reform, so the Texas Legislature acted — kind of. State lawmakers passed the "Sandra Bland Act" during the regular legislative session, but Bland's family called the final product a "missed opportunity" because it didn't address arrests. The measure mandates that county jails transfer people with mental health and substance abuse issues toward treatment and requires independent law enforcement agencies to investigate jail deaths. Gov. Greg Abbott signed the legislation into law earlier this month, and it's set to go into effect in September.

• How the people involved reacted to Wednesday's announcement: Special prosecutors called the dropped charge "the best outcome," a lawyer for the Bland family said the move was "deplorable" and Encinia's attorney said dismissing the case was "the right thing to do." State Rep. Garnet Coleman, D-Houston, a sponsor of the Sandra Bland Act, called the dropped charge "upsetting" and apologized to Bland's family "for how poorly Texas has treated their loved one" in a statement after the announcement.

• A scheduling-related hearing in the securities fraud case against Texas Attorney General Ken Paxton is happening in Houston today. The hearing is the first in the case under a new judge, and it could lead to a new trial date for Paxton. Follow Texas Tribune reporter Patrick Svitek for updates.

• From Ross Ramsey: Better late than never — Gov. Greg Abbott appears to have taken the wheel as the Legislature drives into a special session.

• The Dallas City Council reshaped one of the state’s largest transit boards, amid some city officials pushing to expand buses over regional rail.

• The solar industry is expanding — but some fear an international trade case could end that.

• Better financial days are coming soon, says the group that operates a stretch of Texas highway with the country's fastest speed limit.

Only 1 kid slept at the CPS office last weekend, a sign of improvement at the agency, The Dallas Morning News ($) 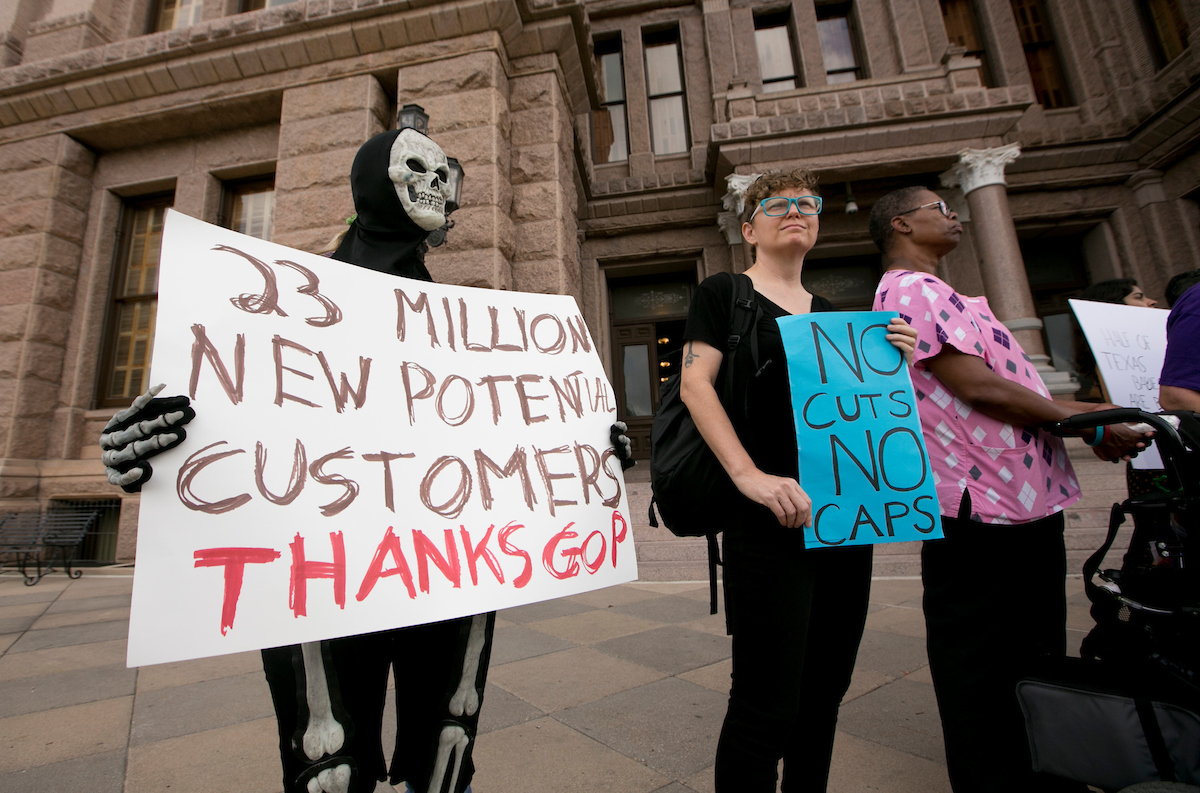 Adapt of Texas, a grassroots disability rights organization, held a "die in" to protest GOP efforts in the U.S. Senate to overhaul the American health care system in Austin on June 28. Photo by Marjorie Kamys Cotera. See more photos on our Instagram account.

"Our states were reborn. The 10th Amendment to the Constitution saw the light of day for the first time in years ..."

— Robert Todd, an attorney, about business and government leaders' response to President Trump withdrawing the U.S. from the Paris Accord via TribTalk.