Two weeks after the Texas Legislature adjourned from its 85th regular session, Gov. Greg Abbott signed the state's 2018-19 budget — a $217 billion document state lawmakers agreed on last month — but vetoed around $120 million in funding for various programs. Here's what you need to know:

• A little context: Tapping his gubernatorial powers, Abbott nixed $120 million for initiatives such as assisting impoverished border communities and improving the state's air quality. The reduction, which is less than one-tenth of one percent of the overall budget, would "further restrain the growth of government and reduce the expenditure of taxpayer funds," Abbott said in his proclamation Monday.

• "That's disappointing," said Cyrus Reed with the state chapter of the Sierra Club, referring to hefty cuts environmental groups suffered under Abbott's veto. The governor stripped around $87 million from a state program to help low-income Texans in urban counties repair or replace their cars if they fail emissions tests. He also cut $6 million for air quality planning at the Texas Commission on Environmental Quality, suggesting the program could "be funded at the local government level."

• What else received cuts? Around $860,000 in funding for a measure to help Texans living in colonias — impoverished regions on the Texas-Mexico border — is gone, since the state budget already accounted for other sources of dollars to assist them, Abbott said. He also vetoed $150,000 for a Legislative Law Clinic at the University of Texas and around $4.7 million for "safety education" at the Texas Department of Public Safety, among other things.

• Baylor University can move past scandal and head in the right direction, the school's first female president said in an interview with The Texas Tribune.

• Despite federal officials delaying the implementation of stricter ozone level standards, the city of San Antonio will continue a push to reduce emissions in its area.

Baylor provost Jones resigns after one year in the role, Waco Tribune-Herald

Gov. Abbott's special session could be the priciest in a decade, The Dallas Morning News ($)

For $35,000, Texas company lets you gun down feral hogs with an M16 from a helicopter, The Houston Chronicle ($) 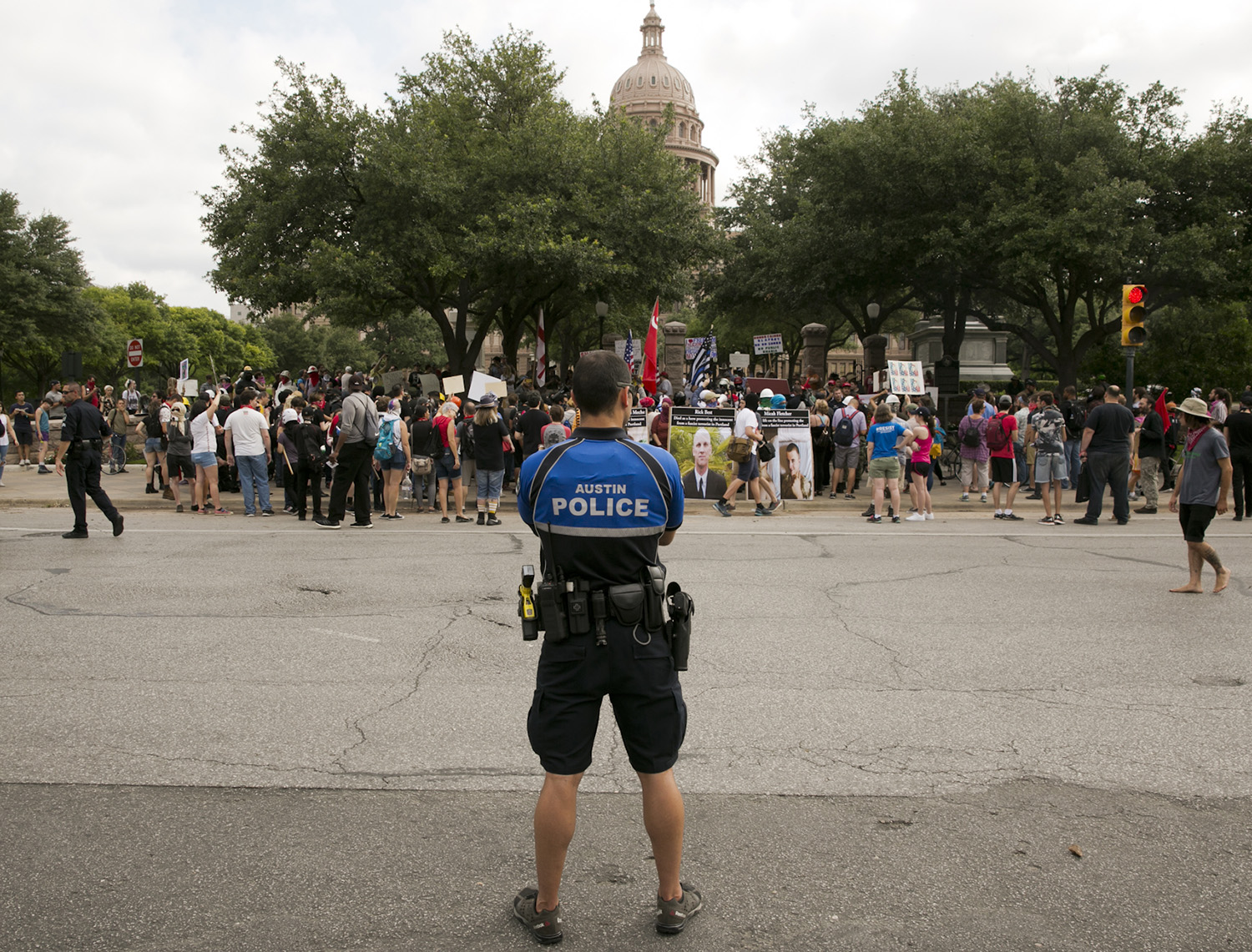 An Austin Police Department officer looks on as anti-Sharia protesters and counter demonstrators assemble outside the south gates of the Texas Capitol in Austin on June 10. Photo by Marjorie Kamys Cotera. See more photos on our Instagram account.

"It’s socialistic, is what it is.”

— Texas Gov. Greg Abbott about a local tree regulation he has set out to axe during the upcoming special legislative session.