Thanks for reading The Brief, The Texas Tribune’s daily newsletter that prepares you for the day ahead. If you have friends who might want to join our list, please forward this email. They can click here to sign up. – BB

• After having its city council districts declared discriminatory, the city of Pasadena is preparing for May elections that could have statewide implications.

• From Ross Ramsey: Texas legislators — along with everyone watching them — are expected to lock horns over transgender Texans and the bathroom bill. But the raw debate over sanctuary cities legislation could be the hallmark of this 85th Legislature.

• Mark your calendars. A federal panel has ordered July 10 as the start date for a five-day trial over Texas House and congressional political maps.

• The Senate passed a bill that would extend the opportunity for students to graduate, even if they haven't passed their required exams, by going before a special committee.

• The debate over tree protection ordinances has brought the power struggle between state and local officials into Texans yards.

• UT police continue to search for a motive in a student's stabbing spree, after a tense day on campus.

• Kevin Lilly is one step closer to becoming a commissioner at TABC, which recently came under fire for controversial spending practices

• Ted Cruz has one less competitor to worry about. Joaquin Castro says he won't run for U.S. Senate in 2018.

At least two dozen protestors at a building on the Texas Capitol grounds were charged with trespassing Monday after a day-long sit-in over a proposed bill that would ban "sanctuary" jurisdictions in Texas. Different versions of the legislation have now passed both chambers. Here's what you need to know.

• Some attorneys were kept out of the building. George Lobb, with the Austin Lawyers Guild, said state troopers prevented him and five other lawyers from entering to speak with their clients. He said a Travis County magistrate apparently issued citations to protesters inside.

• Protesters want Gov. Greg Abbott to hear their message. Bob Lilal, the executive director of an Austin-based immigrant rights group, said the end goal was to convince Abbott to veto the bill, a highly unlikely outcome since the issue is one of four that Abbott has designated "emergencies" this session.

• A controversial amendment added to the bill by the House has protesters even more riled up. The provision would allow police officers to question a person's immigration status during a detainment, and not just arrest. Some argue this would make the most routine police interactions, like traffic stops, fearful experiences for immigrants.

Car was driving away from officer when he shot boy with rifle, Balch Springs chief says, The Dallas Morning News ($)

Today: Join us in Austin for our final "On The Record" event of the session – a happy hour event series breaking down how you can make your voice heard at the Texas Legislature. 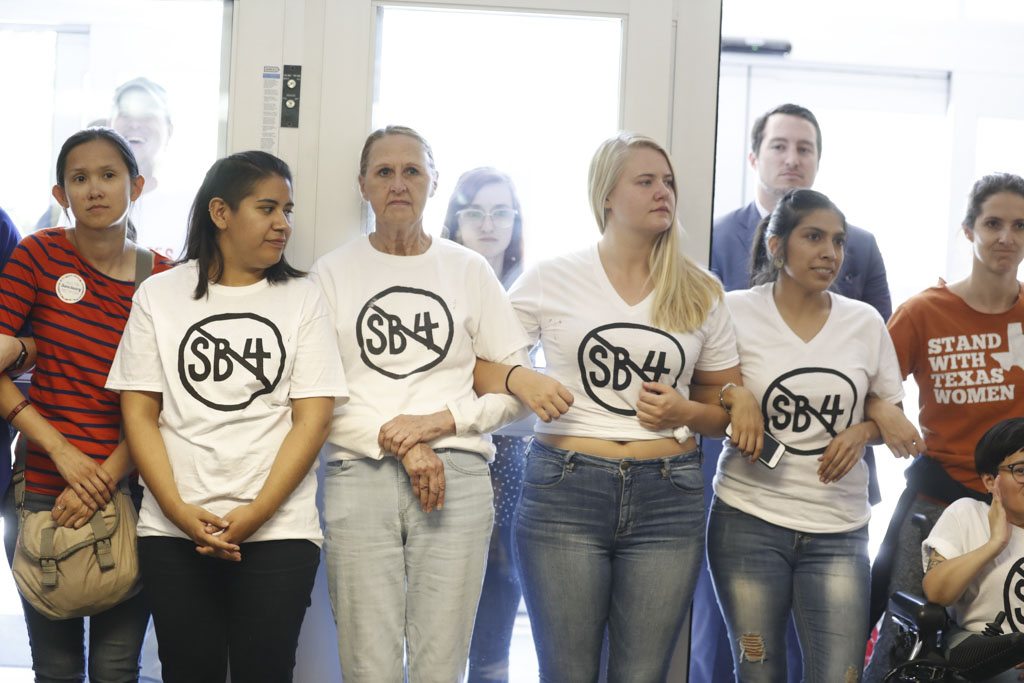 Opponents of Senate Bill 4 block the entrance to the State Insurance Building, where several of Gov. Greg Abbott’s administrative offices are located. The demonstrators said they won’t leave until Abbott refuses to sign SB 4. Photo by Bob Daemmrich. See more photos on our Instagram account.

"It's our job to tell them they're fired and they can go to hell."

— Norma Herrera, a former staffer for the state's Legislative Budget Board, who protested Senate Bill 4 at the day-long sit in Monday.