• From Ross Ramsey: Some Texas lawmakers want to kill the franchise tax that so many businesses hate. But doing so could dig a deep hole in the state's pocket.

• Texas' feral hogs will not be poisoned — at least not yet. The company behind the only EPA-approved pesticide to be used on these animals has withdrawn its request for registration in Texas.

• Parents, listen up. Teachers testified Tuesday on a bill that would cut back on standardized tests in Texas schools. There were mixed opinions.

• Flying vehicles are coming to a city near you. No, really: Uber has picked Dallas and Fort Worth to test out its "Elevate" project.

• Texas Attorney General Ken Paxton will not back down from his request to get another judge to preside over his criminal trial.

• Texas lawmakers want to get serious about protecting Houston from hurricanes. They have urged President Trump to commit $15 million toward building a massive coastal barrier.

The Texas House is expected to take up a contentious bill Wednesday that would ban "sanctuary" policies across the state. The legislation would increase powers for local police officers to enforce immigration laws and punish local entities that don't comply with federal immigration officials. You can watch the debate unfold live on our site and follow Texas Tribune reporter Julián Aguilar for updates.

• Everyone expects a long and emotional debate. Democrats are expected to propose more than 100 amendments. Some lawmakers anticipate "trench warfare," others "a total shitshow."

• The legislation is personal for Dallas Democrat Victoria Neave, who pledged to fast until the end of the debate as a sign of protest. Her form of protest has not gone unnoticed by other lawmakers. Rep. Charlie Geren, the Republican carrying the bill in the House, said, "I'm not doing that. I didn't get to be a fat white boy by not eating."

• The House version of the bill is different than what passed out of Senate. It only allows officers to ask about an immigration status if a person is arrested. It also keeps a provision that forces college campus administrators to comply.

On May 2: Join us in Austin for our final "On The Record" event of the session – a happy hour event series breaking down how you can make your voice heard at the Texas Legislature. 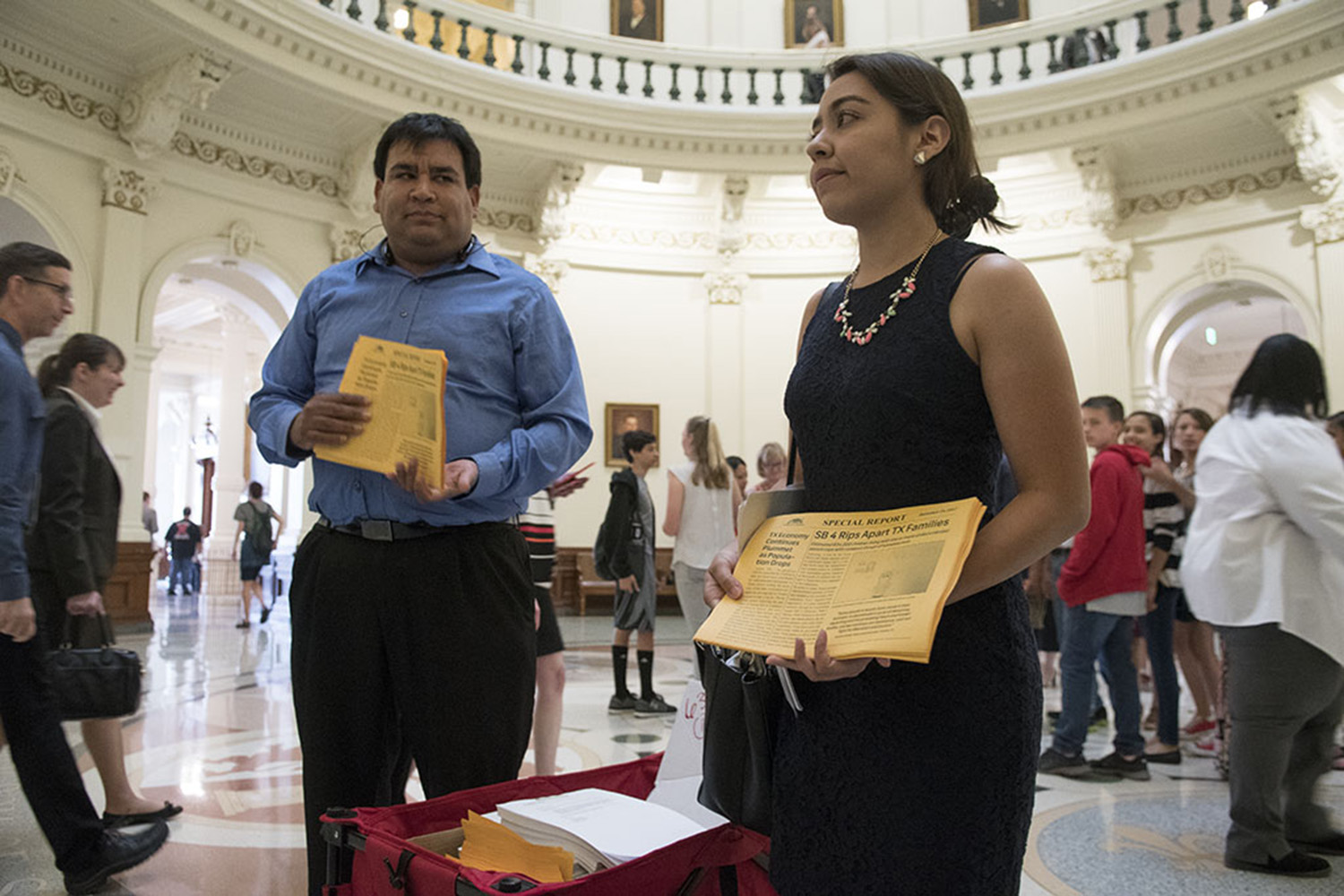 Daniel Candelaria and Karla Perez came from Houston this week to protest Senate Bill 4 at the Texas State Capitol. The Texas House is scheduled to take up its version of the bill on Wednesday as lawmakers debate how and whether to outlaw “sanctuary" jurisdictions. Photo by Bob Daemmrich. See more photos on our Instagram account.

"Students and educators are stressed — and rightfully so — preparing. Taking the 22 exams required by state law steals valuable time from the children we are preparing to become the next leaders of our state and nation."

— Rep. Jason Isaac, a Republican from Dripping Springs about a bill he proposed that would require Texas schools to cut back on standardized testing.