• Texas has 18 doses of lethal injection drugs in stock. Starting today, we're keeping track of movement in the state’s supply.

• From Ross Ramsey: Texas lawmakers will meet with you and put your legislation on the fast track, if you're in favor. Others have to wait for a chance to talk in a committee hearing room in the middle of the night.

• Some Texas lawmakers have complained that universities seem to be taking on ambitious projects that don't serve the needs of the state. Lawmakers gave them that power back in 2013.

• House lawmakers passed a bill that would raise the age of criminal responsibility in Texas from 17 to 18 on Thursday.

• Billionaire Warren Buffett got into the auto dealer business without realizing a protectionist state law could stop him from selling cars in Texas.

• The U.S. Food and Drug Administration has banned Texas' attempted import of an overseas execution drug.

• Several members of the Texas House removed their names as co-authors of a bill that would regulate ride-hailing companies after an amendment that defines "sex" was added to it.

A panel of federal judges ruled Thursday that lawmakers in 2011 intentionally weakened the political strength of minority voters in a number of state House districts across Texas — a move that either violated the U.S. Constitution or the Voting Rights Act. Here's what you need to know:

• In a 2-1 vote, the ruling found that map drawers "demonstrated a hostility" toward establishing minority-controlled districts, despite their population growth. U.S. District Judges Orlando Garcia and Xavier Rodriguez wrote in a majority opinion that map drawers turned the Voting Rights Act "on its head" in areas including El Paso, Bexar and Harris counties.

• The Texas Legislature is reluctant to discuss the issue. The House Committee on Redistricting has not met since 2013 — despite motions from Democrats to discuss the March ruling and consider seven redistricting-related bills that have been referred to the committee. "We're just monitoring the court proceedings," state Rep. Cindy Burkett, R-Sunnyvale, the committee's chairwoman, told the Tribune this month.

• The redistricting battle continues April 27, when attorneys are scheduled to return to court. Items like a timeline and roadmap for any fixes the courts require will be debated, but it's unclear when state lawmakers will be forced to draw a new map since the federal court did not immediately order a new one.

New digs in Denton for program that digs up assistance for veterans, Denton Record-Chronicle

In Dallas and D.C., Texans prepare to march for the sake of science, Dallas Morning News ($)

On April 24: Join us in Austin or on our livestream as The Texas Tribune talks about what "Repeal and Replace" could mean for Texas. This is the beginning of a three-part conversation series on health care. RSVP. 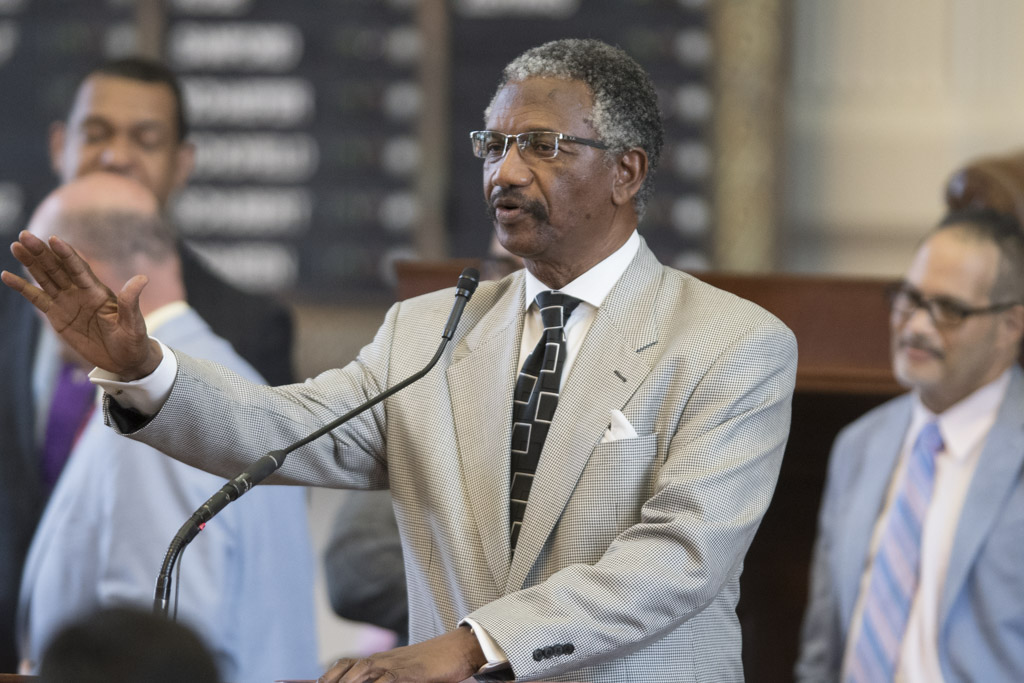 State Rep. Harold Dutton, D-Houston, gives his closing arguments on House Bill 122, which would raise the age of criminal responsibility in Texas from 17 to 18. The Texas House passed the bill 92-52 on April 20. Photo by Bob Daemmrich. See more photos on our Instagram account.

"I do have a problem with a gazillionaire blowing into Texas and meeting with our officials and suddenly a bill gets fast tracked. Republicans all run on being free market people except where there’s an asterisk, and then there’s a bunch of exceptions.’’