• A Fort Worth man who killed a 5-year-old and her grandmother during a children's birthday party will face the Supreme Court at a hearing Monday.

• The state's foster kids need permanent places to live. Some have had to stay too long at inadequate temporary homes: waiting rooms in state offices. Texas is struggling to help these troubled teens.

• Most Texans don't love Trump, according to a new Lyceum poll, which also suggests Sen. Ted Cruz could face a tough electoral competition from Democratic candidates vying for his spot.

• Texas needs to pay up. A federal appeals court this week ordered the state to pay more than $600,000 in legal fees to two couples who sued over a now-defunct same-sex marriage ban.

• Texas high schoolers take note: A bill that would substantially weaken the controversial Top 10 Percent Rule advanced out of a Senate committee.

• The State Board of Education tentatively approved high school biology standards that would no longer require students to challenge the theory of evolution.

• Border residents are worried that Trump's plans for a wall could jeopardize their claim to land they own. A group of Texas attorneys launched a campaign Wednesday to make sure these Texans would be properly compensated if their property is seized.

• A tight budget for a Dallas-based company that stores low-level radioactive waste has put a West Texas nuclear project on hold.

House lawmakers debated some contentious legislation Wednesday, including measures on ride-hailing, bathrooms and school finance. Testimony stretched into the early hours of Thursday morning for a hearing on the House's version of the "bathroom bill." Here's what you missed while you slept:

• In a hearing that lasted until 4:39 a.m., more than 60 people testified against a House bill that would ban cities and school districts from enacting or enforcing local policies that regulate bathroom use. The bill — which is an alternative to the Senate's bathroom bill — was left pending in the committee without a vote.

• Earlier in the day on the House floor, the definition of sex came up in an amendment to the ride-hailing legislation. The bill establishes a statewide framework to regulate companies like Uber and Lyft. It was amended to define "sex" as "the physical condition of being male or female." On social media, a group that advocates for LGBT Texans called the legislation discriminatory.

• Following a four-hour discussion on Wednesday, the Texas House preliminarily approved a bill that would overhaul the funding system for public education in Texas. The bill injects $1.6 billion into public schools. About 96 percent of districts would see increased funding under the legislation.

Congress' top tax man isn't waiting for Trump's blessing to get going on an overhaul, McClatchy

Q&A: GOP lawmakers on their latest efforts to crack down on abortion, The Dallas Morning News ($)

Today: Watch our livestream or join us in person at the Austin Club to hear state Reps. James Frank and Ina Minjarez talk about foster care with Texas Tribune CEO Evan Smith. RSVP.

On April 24: Join us in Austin or on our livestream as The Texas Tribune talks about what "Repeal and Replace" could mean for Texas. This is the beginning of a three-part conversation series on health care. RSVP. 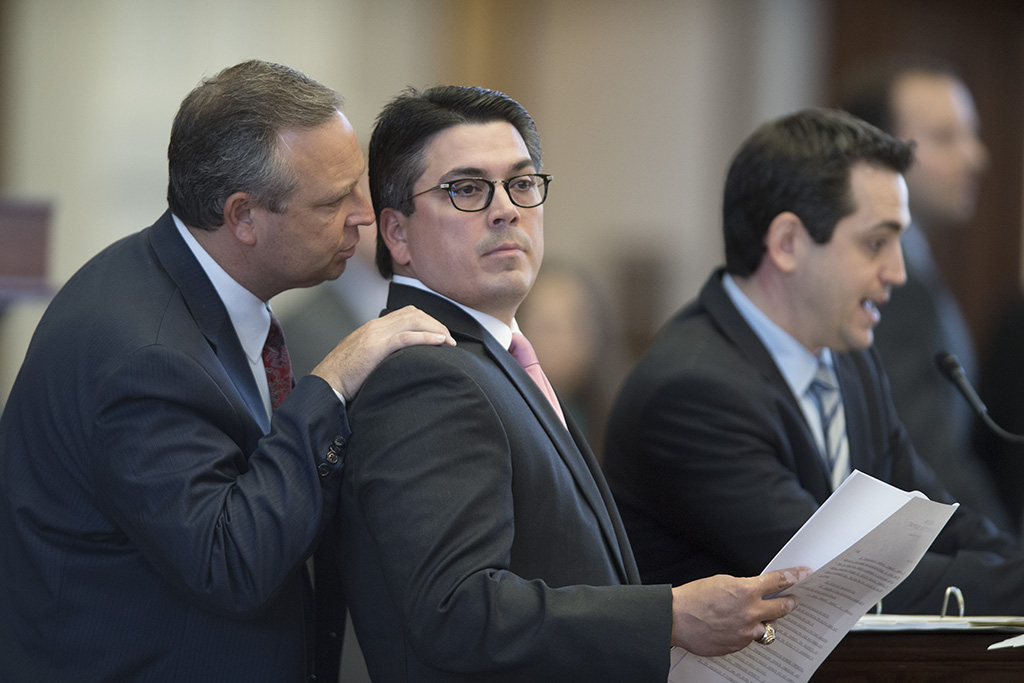 A lengthy House debate over the best way to regulate ride-hailing companies like Uber or Lyft in Texas also included a debate over gender identity. The bill, authored by state Rep. Chris Paddie, R-Marshall, was amended to define “sex” as the “physical condition of being male or female.” Photo by Bob Daemmrich. See more photos on our Instagram account.

"You can see that in their face and in the demeanor ... they look tired, and some of them just look like they’re hopeless. They’ve lost contact with their family, and now they don’t even have a place that wants them."

— Katrina Griffith, a judge who presides over child protective services cases in Harris County, about foster children who have had to sleep in state offices.