For this week’s nonscientific survey of insiders in government and politics, we asked about the fallout from the 2005 video that caught lewd comments about women made by current GOP presidential nominee Donald Trump.

We began by asking in a general sense if this latest scandal spells the end of Trump as a viable contender for the presidency. Nearly three-fifths of the insiders said yes, while about 30 percent said no.

We shifted with the next questions to quiz the insiders on what the fallout from the scandal might mean in Texas. We began by asking the insiders about what a legislative candidate in a competitive seat this fall should do in the aftermath of the Trump tape's release.

A third of the insiders advocated dumping Trump while another third said the more nuanced approach of condemning the language while not cutting ties with Trump was the best option. Just 4 percent advocated embracing Trump.

Exactly half of the insiders said that the Trump controversy would result in GOP candidates further down on the state ballot losing their contests but the insiders largely were in agreement on one thing: Trump's problems don't equate to an electoral opening for Hillary Clinton in Texas. 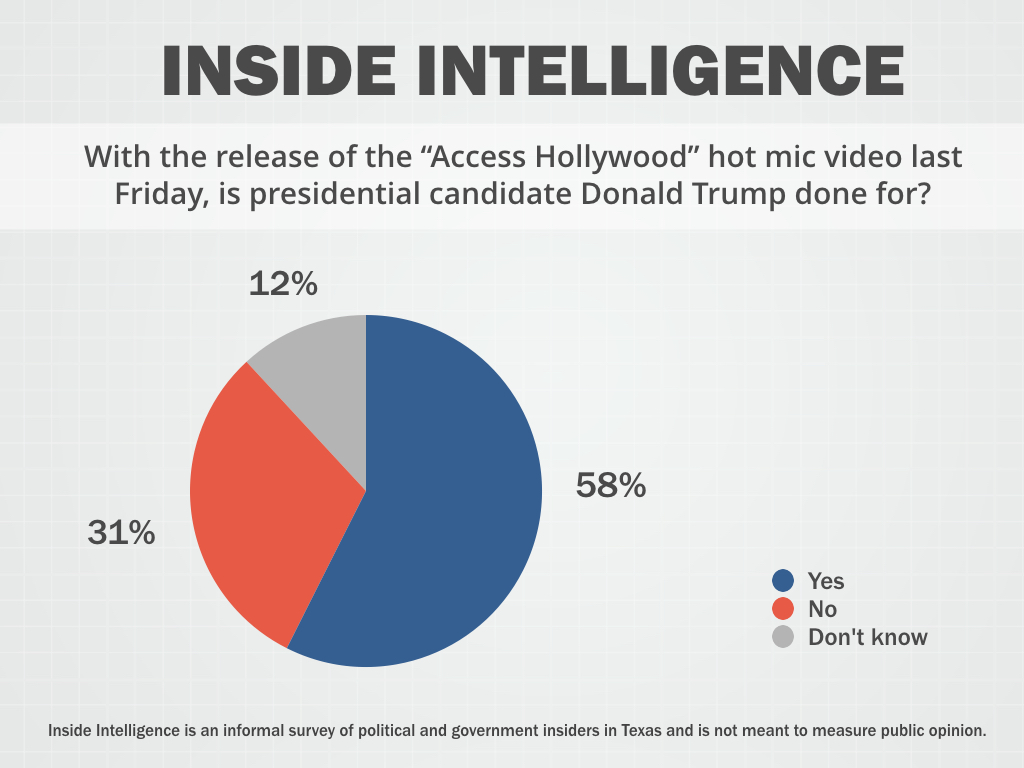 With the release of the “Access Hollywood” hot mic video last Friday, is presidential candidate Donald Trump done for?

• "It doesn't matter that the tape is 10 years old. It just confirms what everyone (except his over-50, white, male base) already knew."

• "Texans do NOT want to be told by the mainstream media who to vote for. This is their doing and voters aren't liking it one bit."

• "Like the spawn of a phoenix and cockroach, Trump will again rise from the ashes."

• "If making fun of war heroes, Down syndrome reporters, Megyn Kelly's cycle didn't hurt him, why would this? Some voters are obviously less concerned about his personality disorder and more interested in his ability to deliver much needed change in D.C." 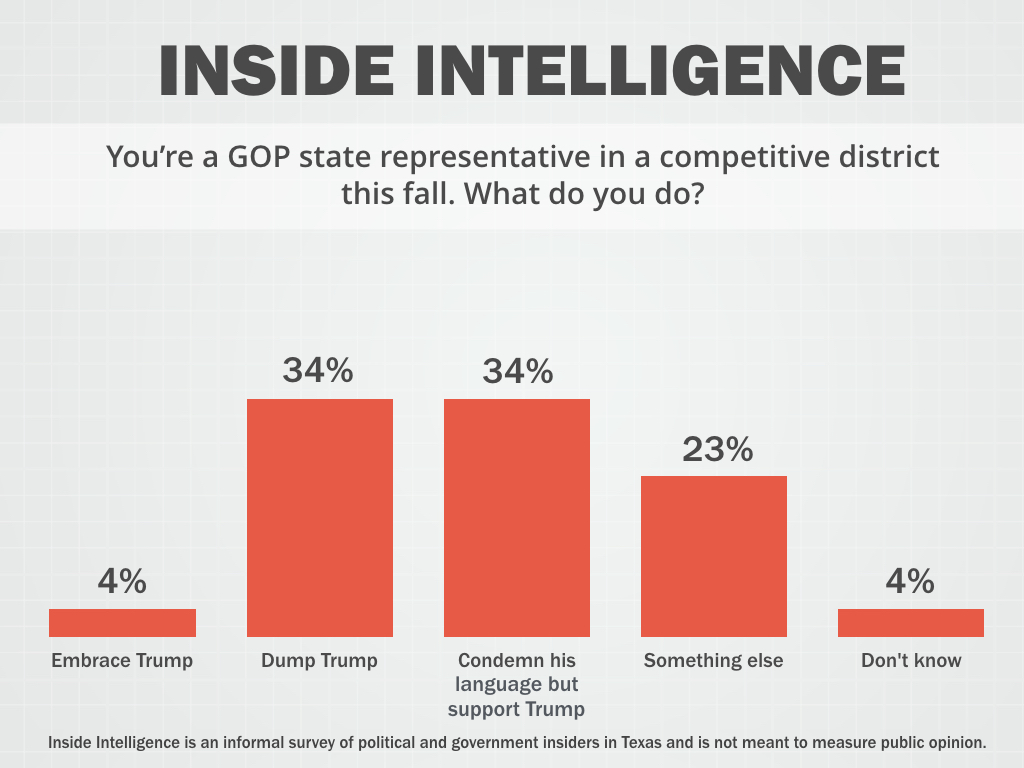 You’re a GOP state representative in a competitive district this fall. What do you do?

• "If a state rep in a competitive district, you would condemn and endorse — there is protocol after all."

• "It doesn't help you if you pull your endorsement. When it comes to party politics, you are in for a penny, in for a pound."

• "Seeing how most voters (and certain state representatives and senators ;-)) can't distinguish between D.C. and Austin, I'd rail against the evil D.C. Stoke that anger at the establishment and elites in D.C."

• "We're talking about a very limited number of people here. You have to condemn Trump, which is easy enough to do (everyone else has), but support him so that you can win the primary in 2018." 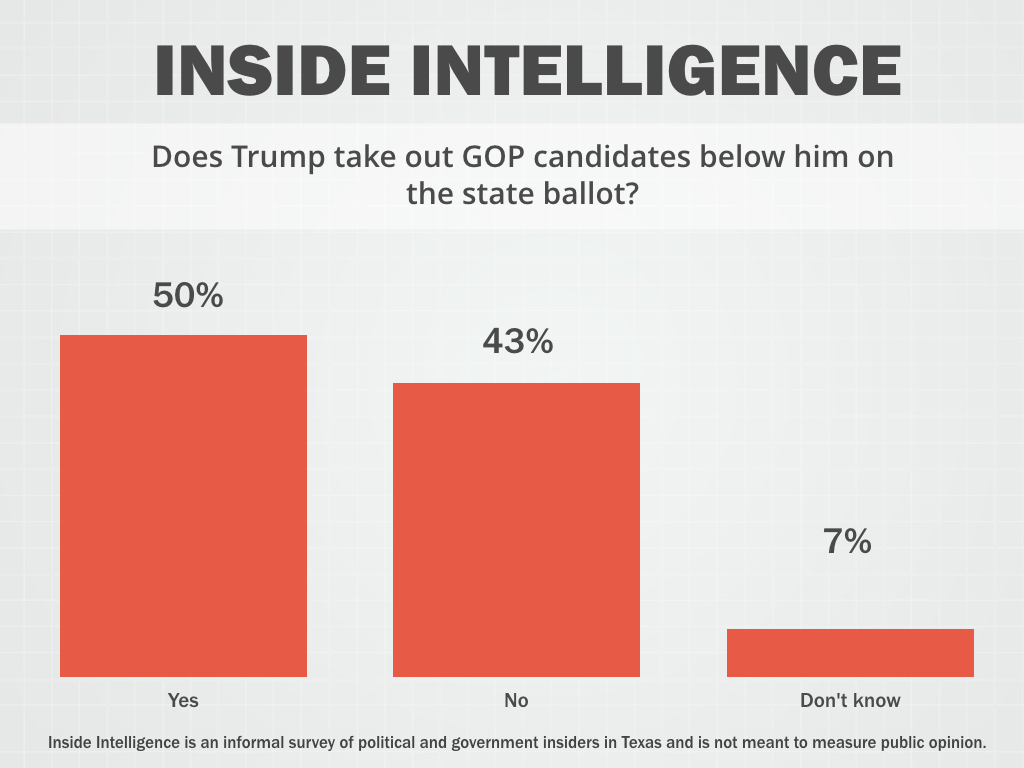 Does Trump take out GOP candidates below him on the state ballot?

• "There is always a seat to flip somewhere. Don't try to lay that at Trump's doorstep. He has generated more enthusiasm that any Republican presidential candidate in history."

• "Polls I've seen show him as a relatively post-partisan candidate, such that neither he nor Clinton have coattails."

• "No more than usual. When Democrats sweep big cities and counties, they often beat all the Republican officeholders and judges. Trump will be blamed, but probably any Democrat who did well in the cities would get the same result."

• "Possibly as many as three House members. Not a big deal. The die was cast when the lines were drawn." 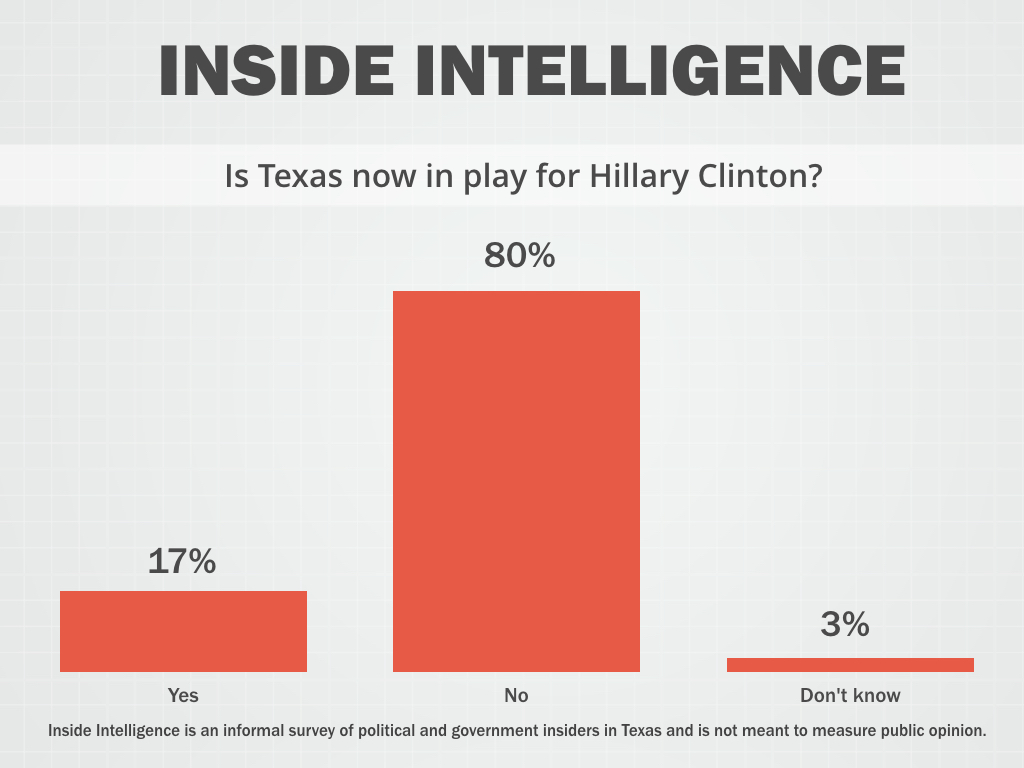 Is Texas now in play for Hillary Clinton?

• "LOL. The lesson of Wendy Davis still holds. Texans will not support a pro-abortion, anti-gun, big-spending liberal who, we just learned, 'dreams' of open borders."

• "It might be closer than in recent elections, but the Texas Democratic Party is just not capable of running a successful statewide election, even against a candidate going down in flames."

• "Texas Republicans will prefer a boorish Yankee know nothing with no qualifications to anyone named Clinton."