For this week’s nonscientific survey of insiders in government and politics, we asked about the debates between the candidates for president and vice president.

We began by quizzing our insiders on the winners and losers in the first presidential debate. On this one, the insiders were in remarkable agreement. Democratic candidate Hillary Clinton was seen as the one most helped by the first debate by nearly four in five of the insiders.

Even more remarkable, not a single person concluded that Republican candidate Donald Trump was most helped by the first debate.

Another 2 percent concluded that both candidates were equally helped and 19 percent thought neither candidates reaped benefits from their first televised encounter.

With that said, more than half thought the debates this year move the needle with the electorate with a little more than third saying that the debates won't have a measurable effect.

We closed with a question about the vice-presidential debate held earlier this week. We asked what's the purpose this debate, whether it be the nominees for veep showcasing their qualifications, attacking the opposing ticket or supporting their ticket. Responses were more or less evenly split among all options with the most popular choice being this: Who are these guys anyway? 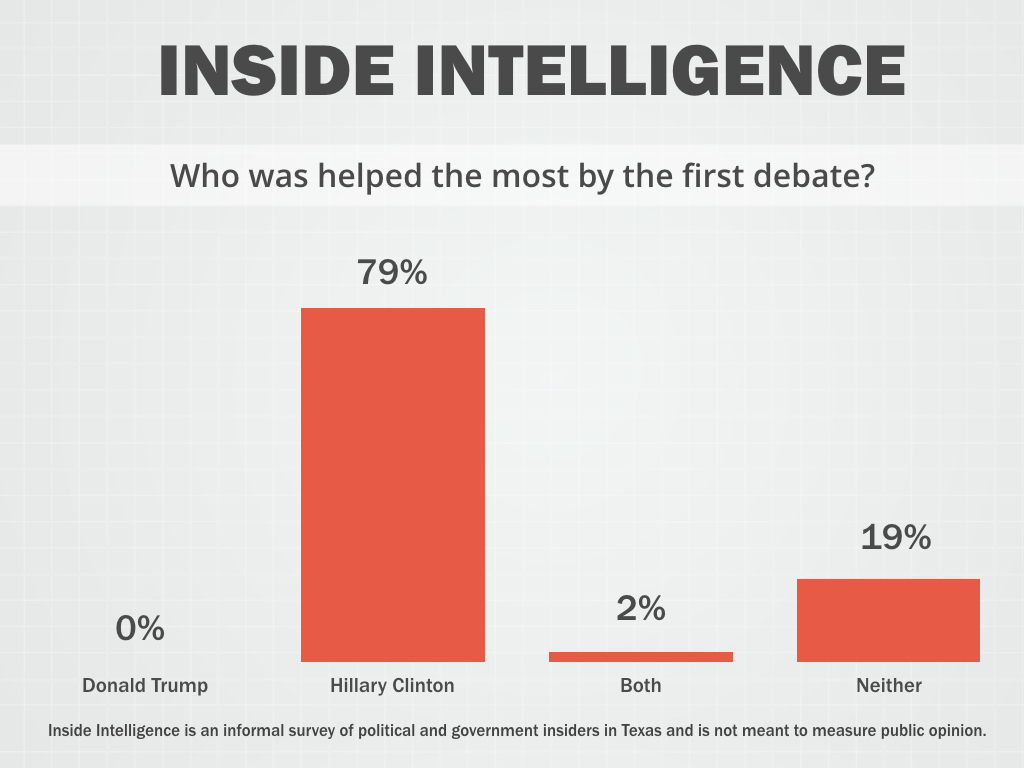 Who was helped the most by the first debate?

• "Independent conservatives were looking for an opportunity to give Trump a chance and he screwed up in a YUGE way."

• "Didn't watch. So over this election."

• "I think Hillary's uptick this past week was due more to Trump and Ms. Machado's back and forth than Trump's horrific debate performance."

• "Trump good for a half-hour and then followed every rabbit trail Lester Holt and Hillary threw at him. Critical issues facing the nation, who cares!"

• "Trump was terrible but apparently only lost a point in RCP." 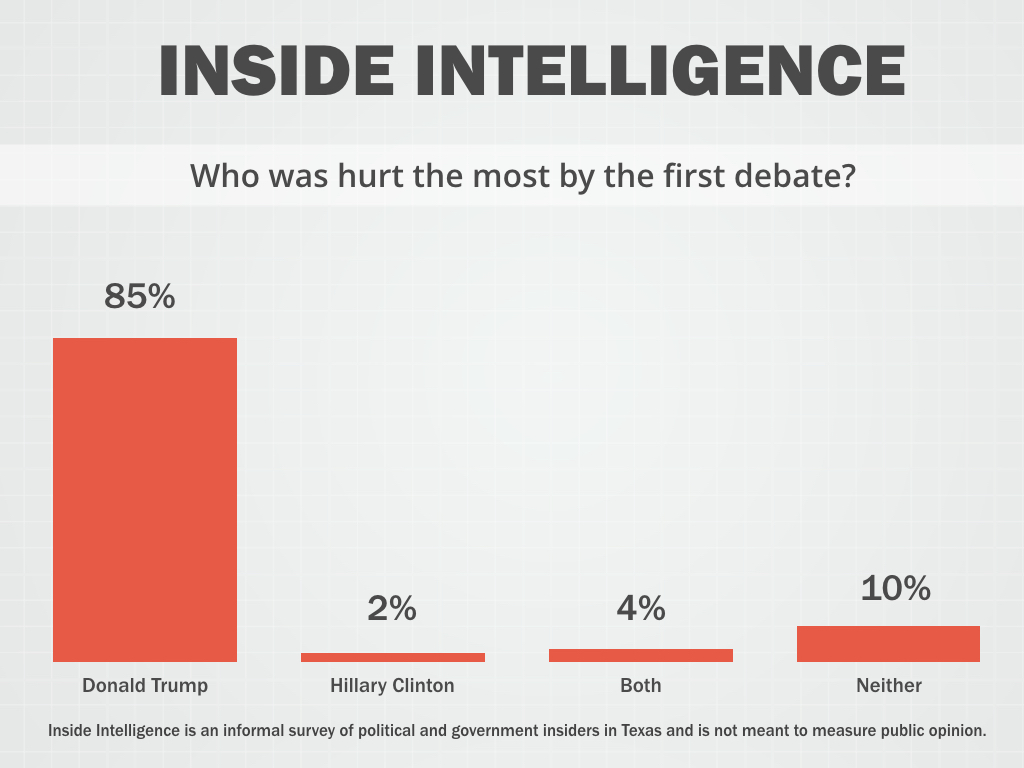 Who was hurt the most by the first debate?

• "Trump has his base and they will never falter. However, the purpose was to increase his popularity and he failed."

• "Someone who's not an establishment Republican may see it differently. Call me old school — guilty."

• "He was hurt only modestly in the debate but responded with more goofiness. He needs to play error free ball to win from here." 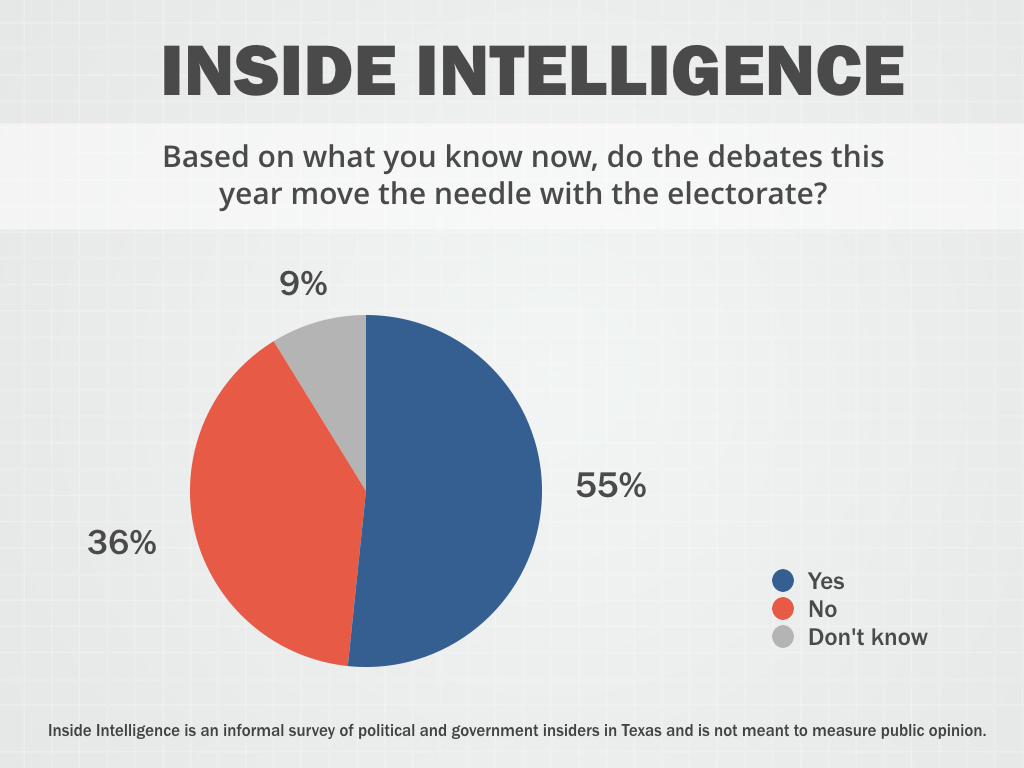 Based on what you know now, do the debates this year move the needle with the electorate?

• "I just don't know anymore. I'm struggling to understand this whole election without using something useless like rationalization. Ping me when it's over, I'll be the one helping House friends in Dallas County."

• "Everyone I know is resolute in their hatred for one, the other, or both. I suppose if Trump really steps in it, it could move him backwards, but I've been saying that for over a year. Hillary probably won't mess up."

• "This election cycle has been different in every way imaginable and unimaginable. With a few weeks left, everything moves the needle, including the debates."

• "So many undecideds — if polls suggest 9 percent undecided, this could equal unmotivated to vote. Debates represent last real good opportunities to move the needle."

• "Trump's base (over 50, white, undereducated men) support him more passionately, while everyone else is either moving to Clinton, Johnson/Weld, not voting, or moving to Canada." 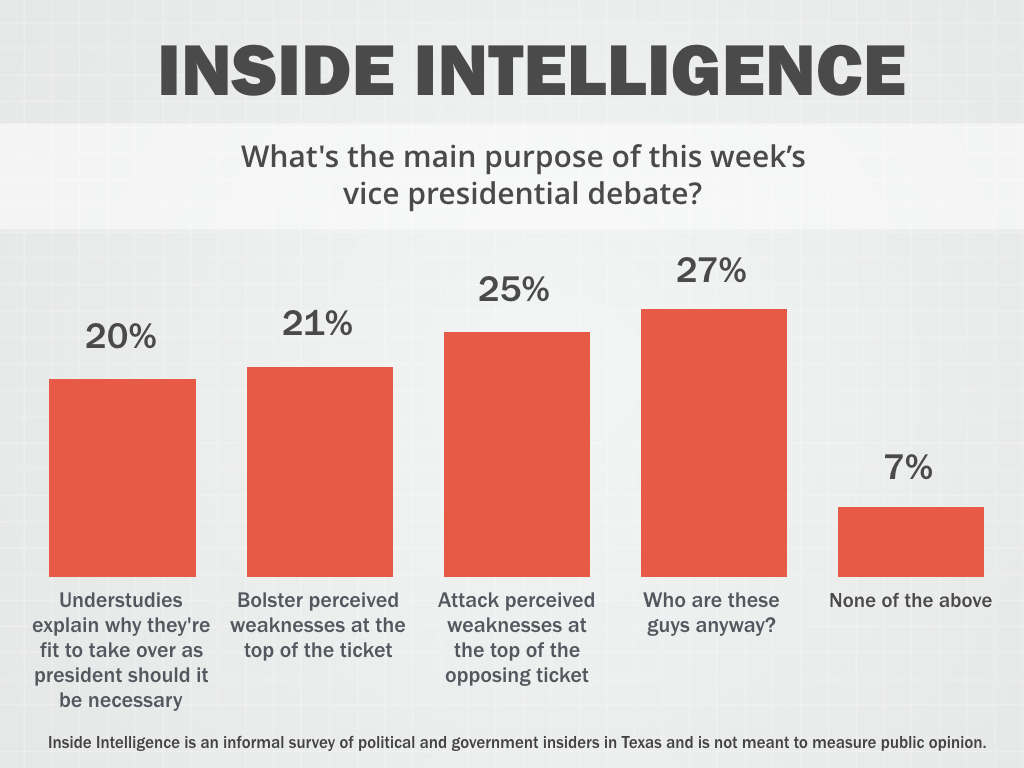 What's the main purpose of this week's vice presidential debate?

• "Both veep candidates got in good shots on the opposition. Kaine actually put more fire on the target, but he did it in an obnoxious manner."

• "Expand on their ticket's policy initiatives... except Trump/Pence ticket has no policy initiatives, so in Pence's case, making the case for why he accepted Trump's invitation to be on the ticket so he can salvage some sort of exit plan for himself..."

• "I know a few people who have said their decision will hinge on this, but I don't believe it."

• "Hey, we got two almost 70-year-olds with questionable health. No. 2 could easily become President."

• "None of the above. It has no real purpose. Who started these stupid VP debates anyway?"