For this week’s nonscientific survey of insiders in government and politics, we asked about several recent pronouncements coming from leaders in the state in order to evaluate those statements, a la TV Guide's Cheers & Jeers.

We started by asking about Ted Cruz's about face on Friday over whether to endorse the Republicans' nominee for president, Donald Trump. Half of the insiders jeered the decision while just 10 percent cheered Cruz's decision to back Trump. Another 38 percent said it merited neither cheers nor jeers.

We continued by asking about Lt. Gov. Dan Patrick's comment at the Tribune Festival that suggested he placed blame for the shooting of five Dallas police officers on the Black Lives Matter movement, which staged the July protest march at the close of which a gunman opened fire on police.

On this one, more than three in five of the insiders jeered the comment with 16 percent cheering it and 20 percent choosing neither.

We shifted then to Gov. Greg Abbott's decision to place conditions on Texas' participation in the refugee resettlement program, which several state leaders say don't have enough safeguards against admitting potential terrorists into the country. Backers of the program say a thorough vetting process is already in place.

Exactly half of the insiders jeered Abbott for his decision to defy the federal government on the resettlement program while 31 percent cheered Abbott and 16 percent said neither.

Finally, we asked about former Baylor President Ken Starr who said at this weekend's Tribune Festival that sexual assault is not "an endemic problem" at the school, which has come under intense criticism for its handling of accusations of sexual assault by Baylor athletes.

On this one, Starr's remark was jeered by 71 percent of the insiders and cheered by just 6 percent. Another 14 percent chose to neither cheer nor jeer. 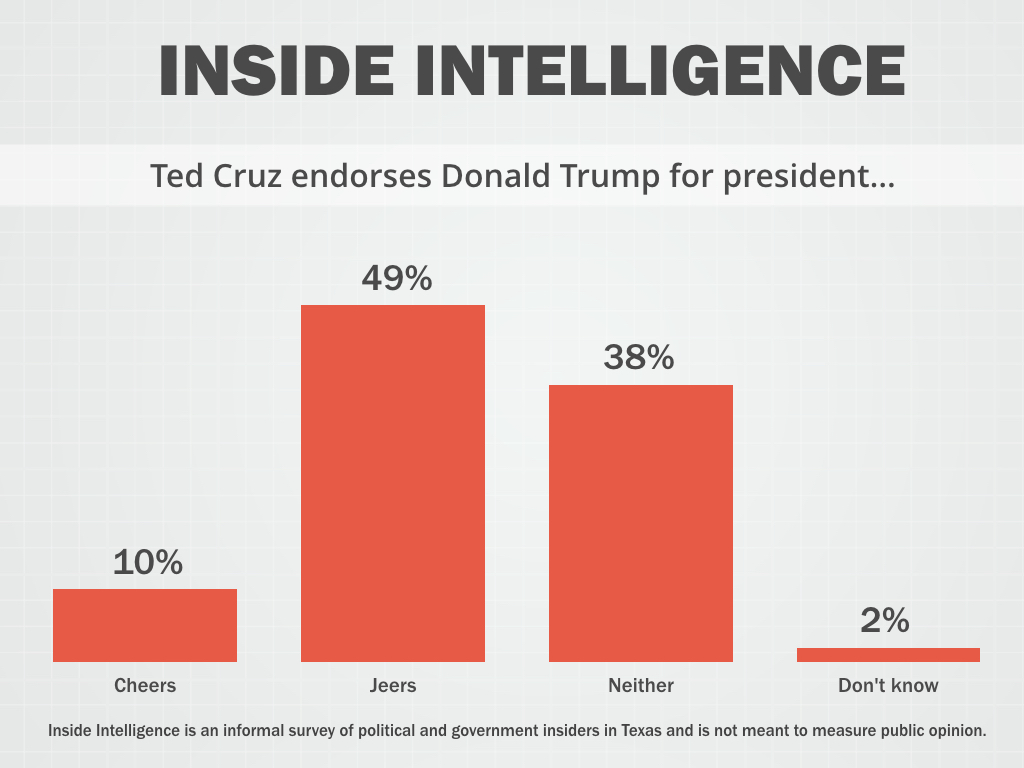 • "Ted's convention move was questionable but he could fall back on consistency and principles. Now, that's gone. It was a shortsighted move to cover his bases on a 2018 challenge and will backfire more than his convention speech. Two unforced errors."

• "I'm happy for both men. Cruz is courageous and principled. He's helping us attain our goal: defeat Hillary."

• "First, he was lying Ted, now he's flip-flopping Ted. Make up your mind, stupid! Be a man and stick to your principles. You just proved how much of a politician you really are and for that I take away your Tea Party credentials! Booo!"

• "He needed to do it. Political necessity. If Trump wins or loses narrowly, Cruz would be toast if he didn't endorse him."

• "He has somehow seized the worst of both worlds." 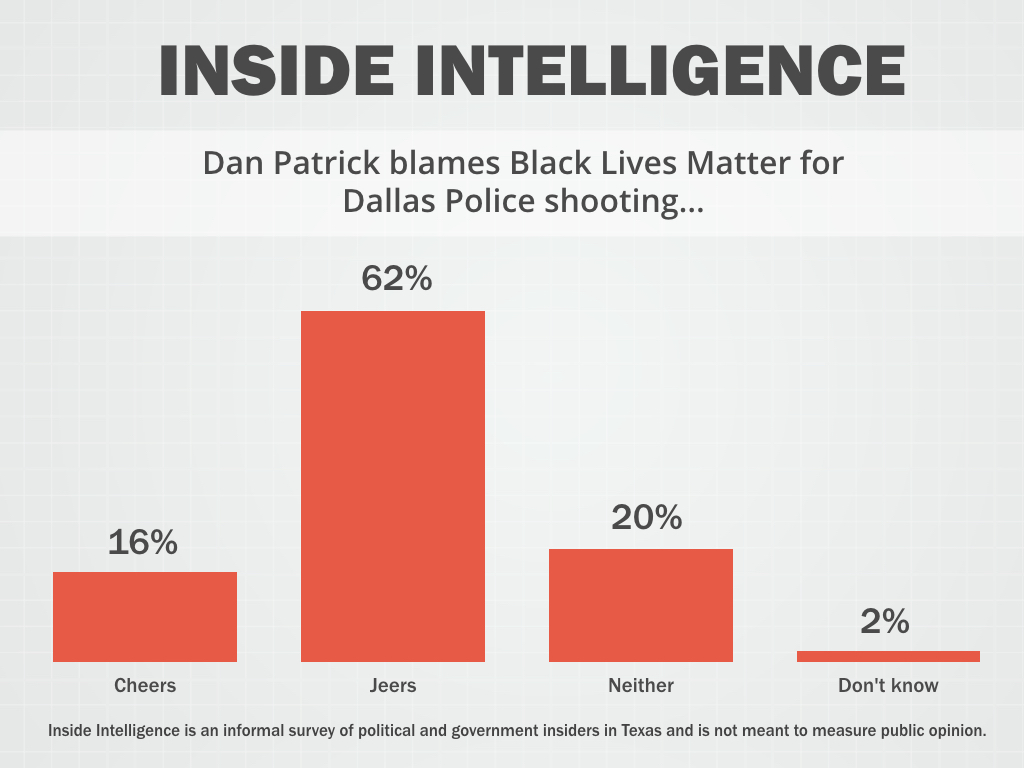 • "Horrible, but he is playing the same Trump cards with his political future believing nothing he can say will hurt him with his voting base."

• "I think BLM is genuinely out to protest that gets overtaken by rioters. Kind of like the Tea Party — originally formed as 'Taxed Enough Already' — has been overtaken by people who are more concerned with bathroom policies. We can't blame people with good intentions when their causes are hijacked by others."

• "Black Lives Matter is to blame for the murders. They foster violence. The group should be put on trial for accessory to murder. DAs around the country have prosecuted similar cases."

• "A rare moment of poor choice for Mr. Goeb. He doesn't usually stumble quite so openly."

• "Neither. Both sides blame the other for the extremists they tolerate. This was business as usual, no one has the higher ground." 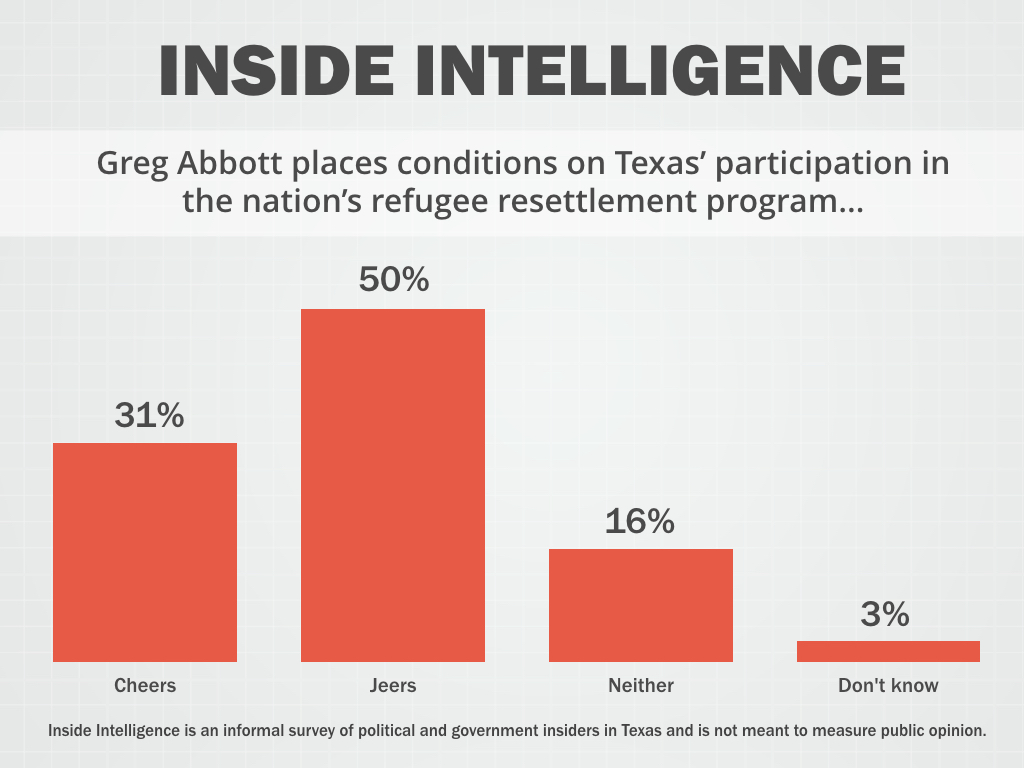 • "That is bigoted, and pandering to the worst elements in Texas."

• "Any pushback on Obama's irresponsible immigration policies is a plus for Texas."

• "Again... Abbott is doing nothing to expand the Party... rather, he is all about re-election."

• "Jeers. So much for 'innocent until proven guilty.' Break out the Skittles." 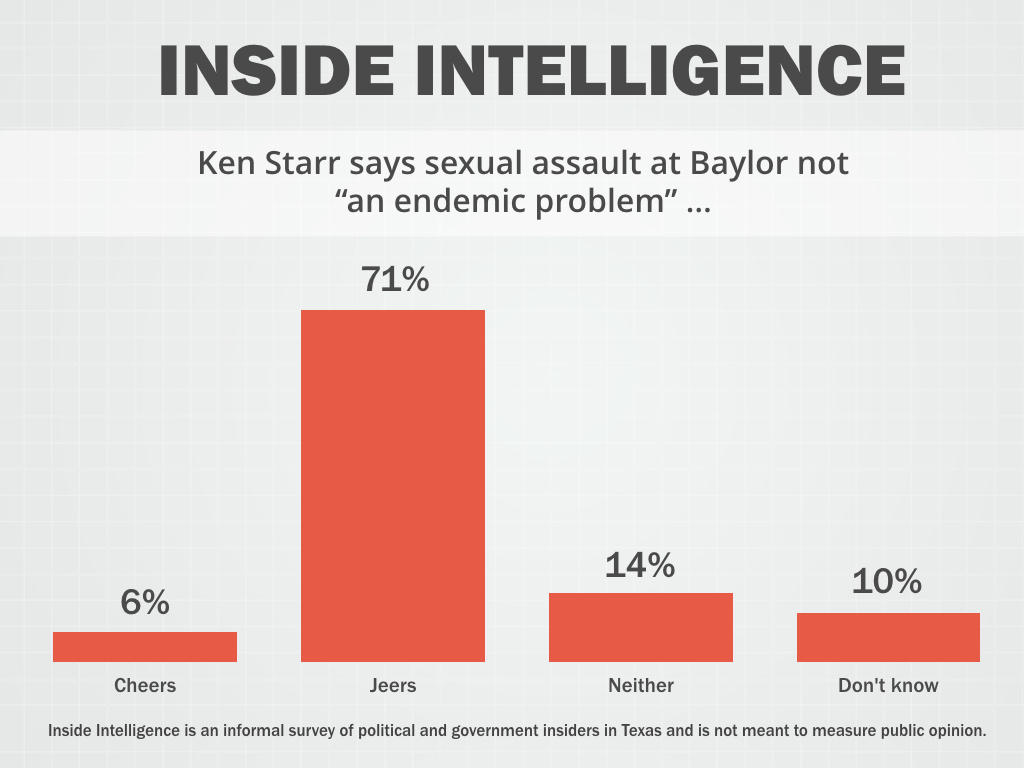 • "May be factually true turning on the word 'endemic.' But, so what? There is no path to redemption for Starr, and no healing for the Baylor community by making this fine distinction."

• "Baylor's regents should release the entire Pepper Hamilton report. Until they do, we can only guess at what the real problems at Baylor were."

• "Every single time this man opens his mouth, he says the exact wrong thing (even when the great Merrie Spaeth attempts to coach him.) Good riddance, Ken, can you just please go away now?"

• "The very man who went after Bill Clinton on his sex scandal has the audacity to say that 'rape' is not an endemic problem. Mr. Starr, can you define what 'is' is?"

• "Oh geez. What is with this week's questions? It's a parade of horribles, LOL. Is there no one left in public life who has any self-awareness?"