For this week’s nonscientific survey of insiders in government and politics, we asked about Donald Trump's popularity in Texas and his long-term impacts on the Texas GOP.

Recent polling in Texas would seem to suggest that Trump, the GOP's nominee for president, is underperforming relative to how a statewide Republican candidate routinely performs.

We began this week's survey by asking whether the insiders put much credence in the numbers indicating that the race is closer at the top of the ticket than has been seen in recent presidential elections. The insiders were close to a consensus on that: 78 percent said they thought the polling is credible.

We followed up by asking the insiders to evaluate Lt. Gov. Dan Patrick's statement this week that U.S. Sen. Ted Cruz risks being left behind politically unless he endorses Trump for president. Exactly half of the insiders agreed with Patrick's assessment while 39 percent disagreed.

We then asked a couple of questions on the potential impact of the presidential election on the Texas GOP over the next five to 10 years.

We began by asking if a Trump win would endanger the Republicans' solid hold on the state in the years to come. Just over half the insiders said yes while 39 percent said no. We concluded by asking if a Hillary Clinton presidency might prove more beneficial to Texas Republicans. On that one, 46 percent agreed that a Clinton presidency would help the GOP in Texas while 35 percent disagreed. 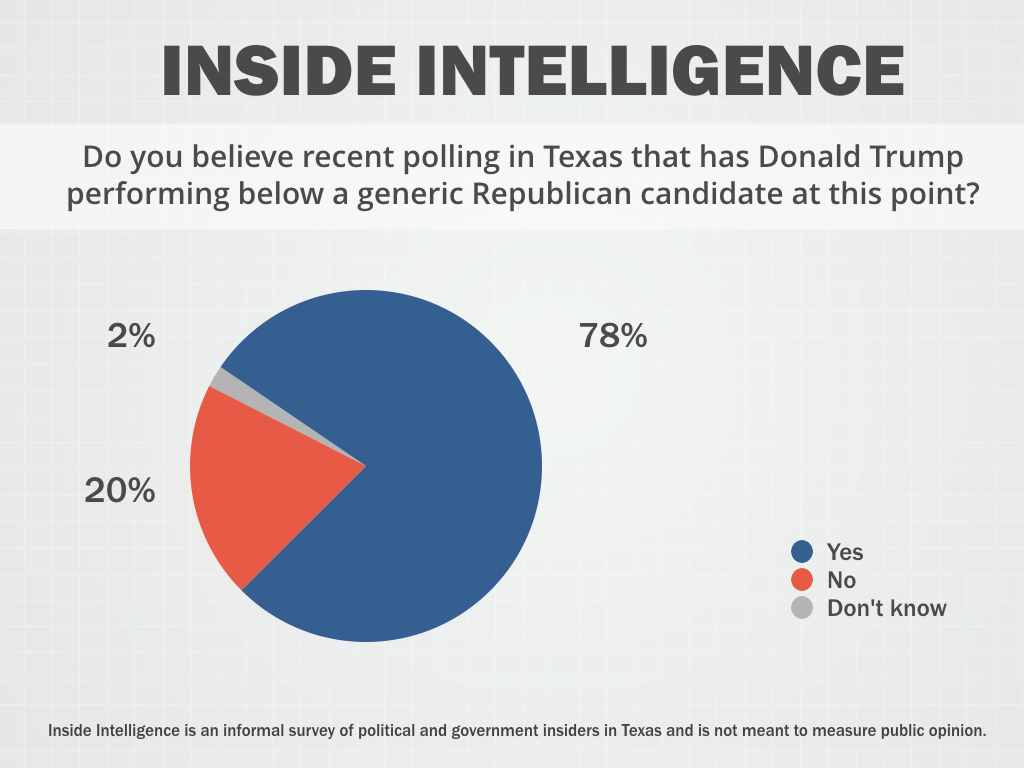 Do you believe recent polling on the presidential race in Texas that has Donald Trump performing below a generic Republican candidate at this point?

• "I believe the polling but polls do not gauge enthusiasm, which will be a real factor in November."

• "Yes, but he's gaining ground recently as Hillary falters and as many Republicans return home, as expected."

• "I have friends who're still committed to NOT voting."

• "Those generic candidates never quite work out, do they?"

• "No, I don't believe the polls. This is a movement election. From unprecedented turnout at rallies to record breaking small-dollar fundraising — no pollster or political pundit has gotten anything right about this election so far." 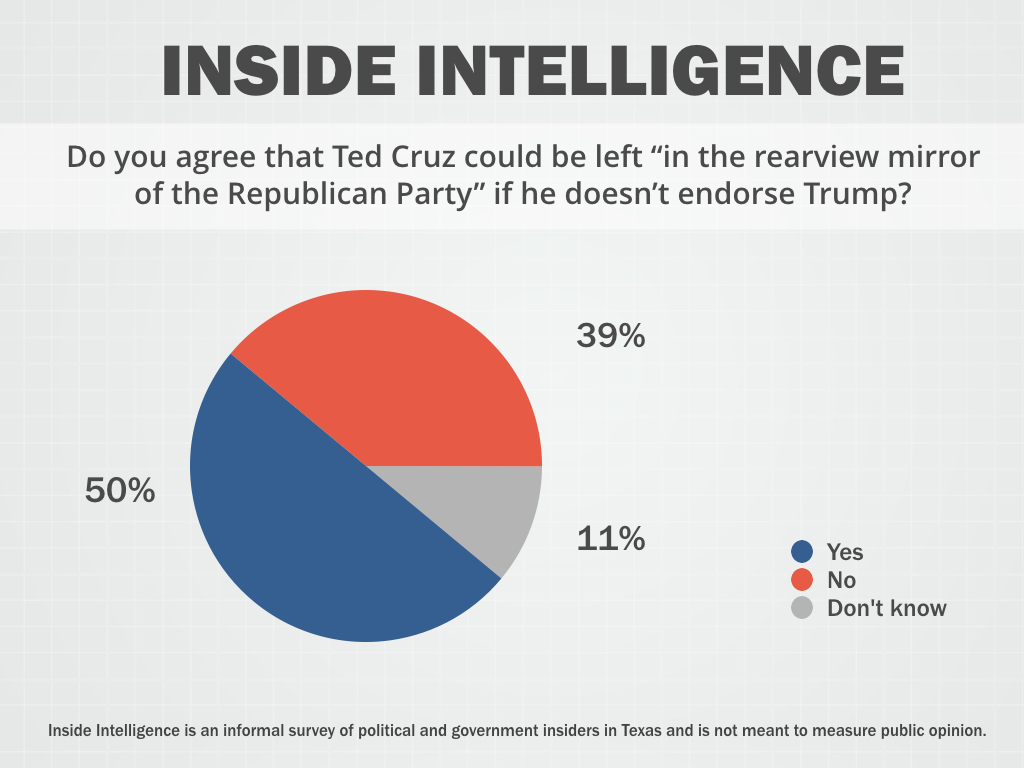 Do you agree with Dan Patrick’s assessment that Ted Cruz could be left “in the rearview mirror of the Republican Party” if he doesn’t endorse Trump?

• "Yes, but the rearview mirror is attached to a horse and buggy rig."

• "Dan Patrick is the best political windsock in Texas."

• "Depends on whether Trump wins or loses and if he loses, how badly. If Trump wins or loses but keeps it close (respectable?), then yeah, Cruz will be left behind. But if Trump loses badly and drags down the ticket (U.S. Senate flips?), then Cruz gets to say, 'I told you so,' and everyone will be scrambling to get back on his train."

• "Both Cruz and Patrick are on the razor's edge; either could end up more powerful after the election."

• "For a while, people were scared to cross Ted Cruz; that is no longer the case. He asks and asks for help and the heart and soul of the GOP asked him for help and he made it about himself, again..." 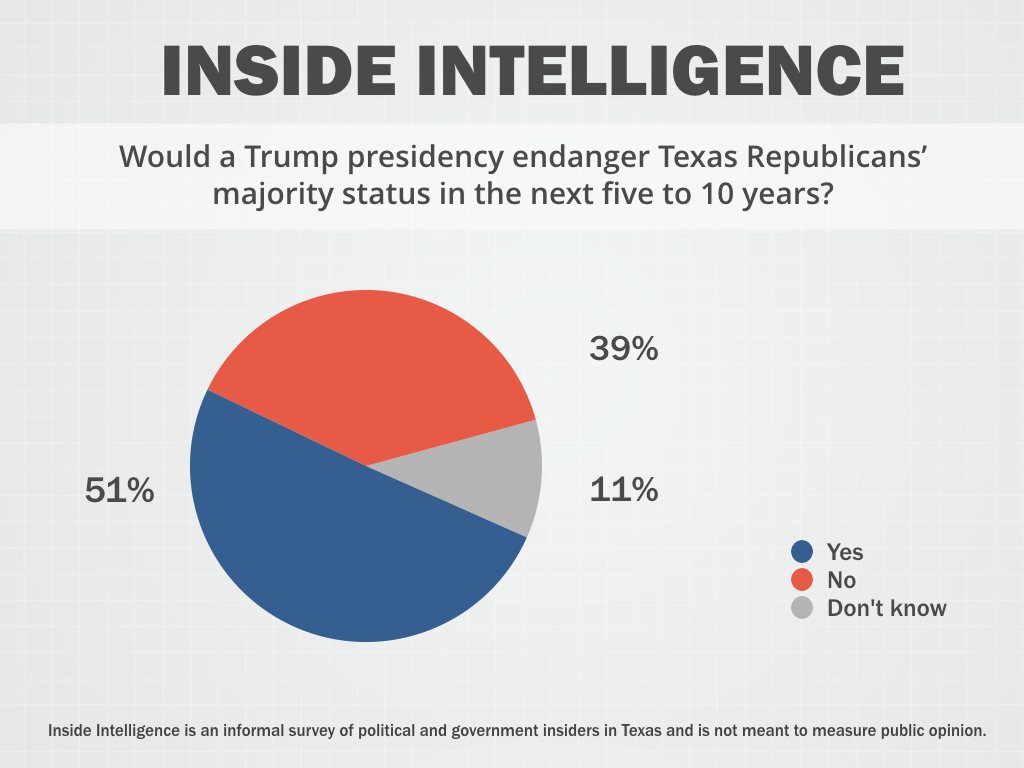 Would a Trump presidency endanger Texas Republicans’ majority status in the next five to 10 years?

• "Will strengthen it, and bring new voters to the party. Yes, I said new and more Republican voters."

• "Trump will speed the inevitable demise of the urban Republican. Demographics will take care of the rest."

• "Not likely, in their primary re-election both Speaker Ryan and Sen. McCain differentiated themselves from the nominee. Similarly, Texas Republicans voters will do the same."

• "Trump is a Yankee and we won't pay much attention to him. Oh — you said a Trump presidency. That ain't gonna happen."

• "He'll be more successful than most people think, politically and substantively." 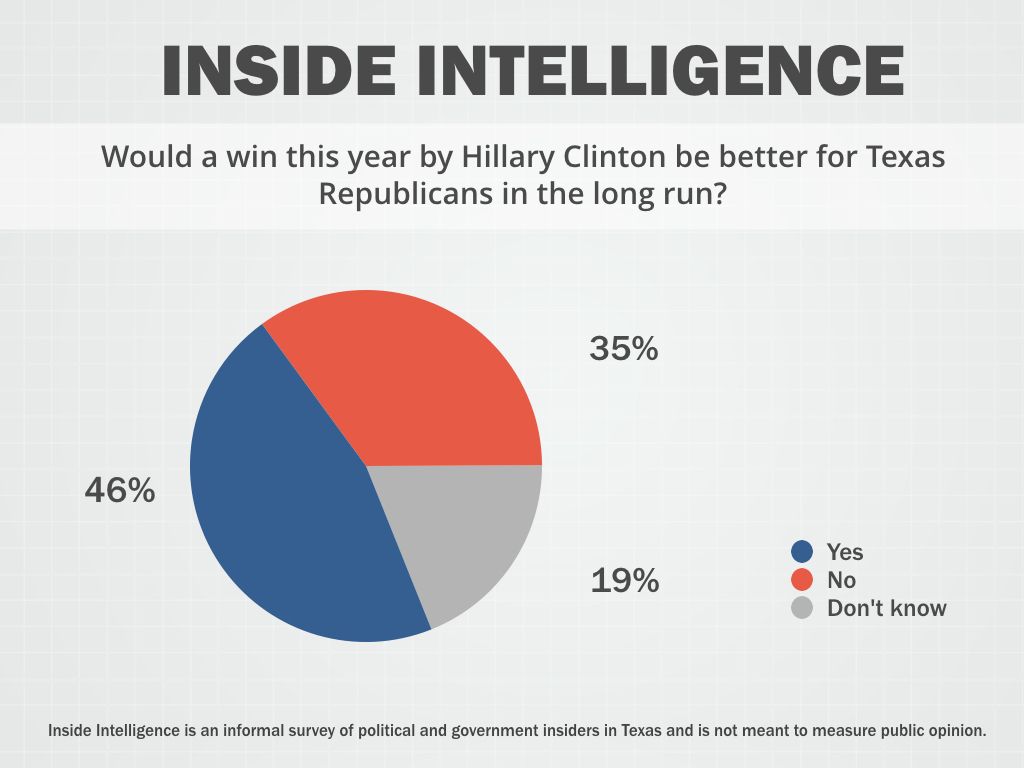 Would a win this year by Hillary Clinton be better for Texas Republicans in the long run?

• "They can keep bashing and suing the feds. However, they still face the demographic sea change that is coming."

• "It would be better for Texas as it would promote more competitiveness and hopefully moderation."

• "Define 'long run.' If she wins, it will take two generations to undo the damage, if it can be undone at all."

• "Republicans like to have a villain, real or fabricated. Makes it easier to prey on fear. Remember Jade Helm?"

• "Of course. What will the AG do if there's no bogey(wo-)man in the White House to sue? Why, they'd have to mothball that whole office."