For this week’s nonscientific survey of insiders in government and politics, we asked about voter turnout in Texas and what can be done to improve it.

Voter participation in Texas ranks in the lower tier of states, a situation that prompted Texas' secretary of state, Carlos Cascos, to say earlier this month that turnout figures in the state "should embarrass everyone."

We began this week's survey by asking the insiders to assess that remark by the state's top elections official. Three-fourths of the insiders agreed with Cascos with another one in five saying they disagreed.

We followed by asking who would most bear the blame for low turnout figures. On that question, 44 percent said voters were most to blame with just 12 percent blaming lawmakers. Another 33 percent blamed both groups while 11 percent said neither were to blame for the situation.

We then quizzed the insiders on what options would be most effective at boosting voter turnout. The most popular response was removing the responsibility of redistricting from lawmakers, cited by 47 percent of the insiders. That was followed by making voter registration easier and having better candidates, each cited by 42 percent.

Another 38 percent said expanding early voting options would help boost turnout. Getting rid of voter ID was the least popular option for increasing turnout, named by 27 percent of the insiders.

Finally, we asked whether the Legislature would act to encourage greater turnout, turning to the venerable Magic 8 Ball to supply the options. The insiders were mostly in agreement here with 82 percent saying, "My sources say no." That was followed by 6 percent saying, "Ask again later," and 2 percent saying, "Signs point to yes." 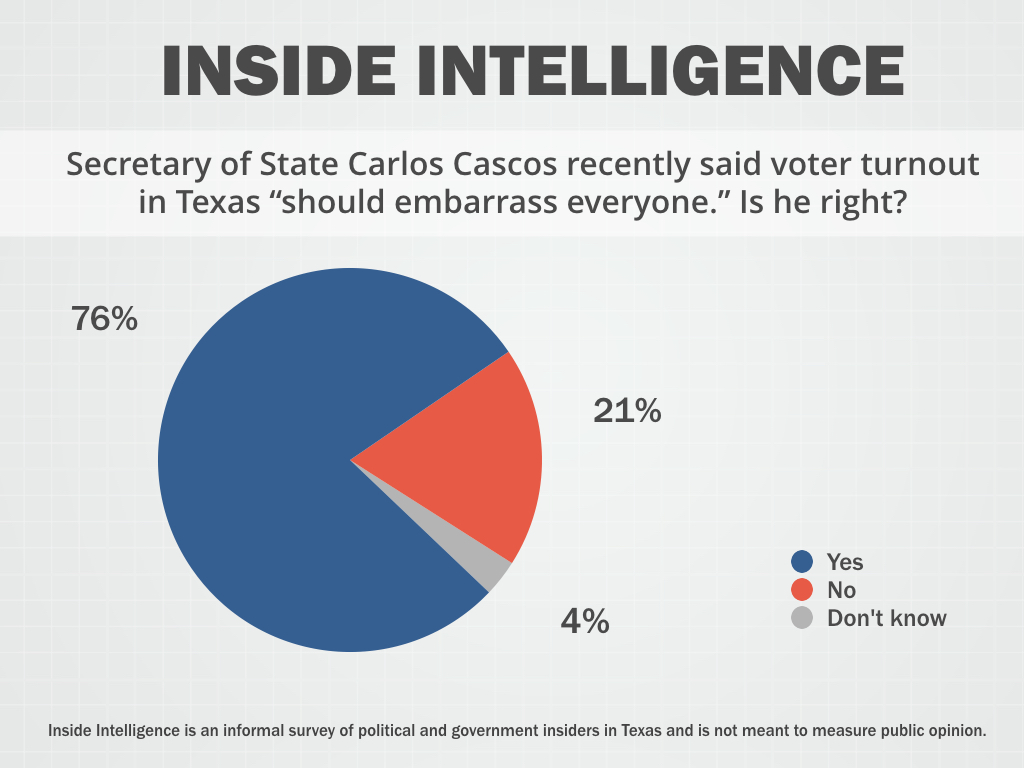 Secretary of State Carlos Cascos recently said voter turnout in Texas "should embarrass everyone." Is he right?

• "And he and the state should be more embarrassed at their campaign to attract voters."

• "The only people who are embarrassed about low voter turnout in Texas are the Democrats and their allies in the media. Nobody else thinks this is a problem. Few places are easier to vote than Texas. We have two weeks of early voting and voting on Saturdays. Voter registration is reasonably high. But in the end, people have the right not to vote — unlike some countries where voting is mandatory."

• "A choice to not vote is also a choice. I think it says more about the candidates than the electorate. In fact, I've been pondering that very option in relation to the upcoming presidential election."

• "Maybe. We know how many are registered, but do we know how many intended to vote when they did register? Put another way, are folks voting in the same proportion as those who paid attention vs. passed notes or slept during high school civics class?"

• "Depends on your priorities. If you think civic engagement is important, then yes — everyone should be embarrassed. Most Texans, however, are more embarrassed by the Dallas Cowboys." 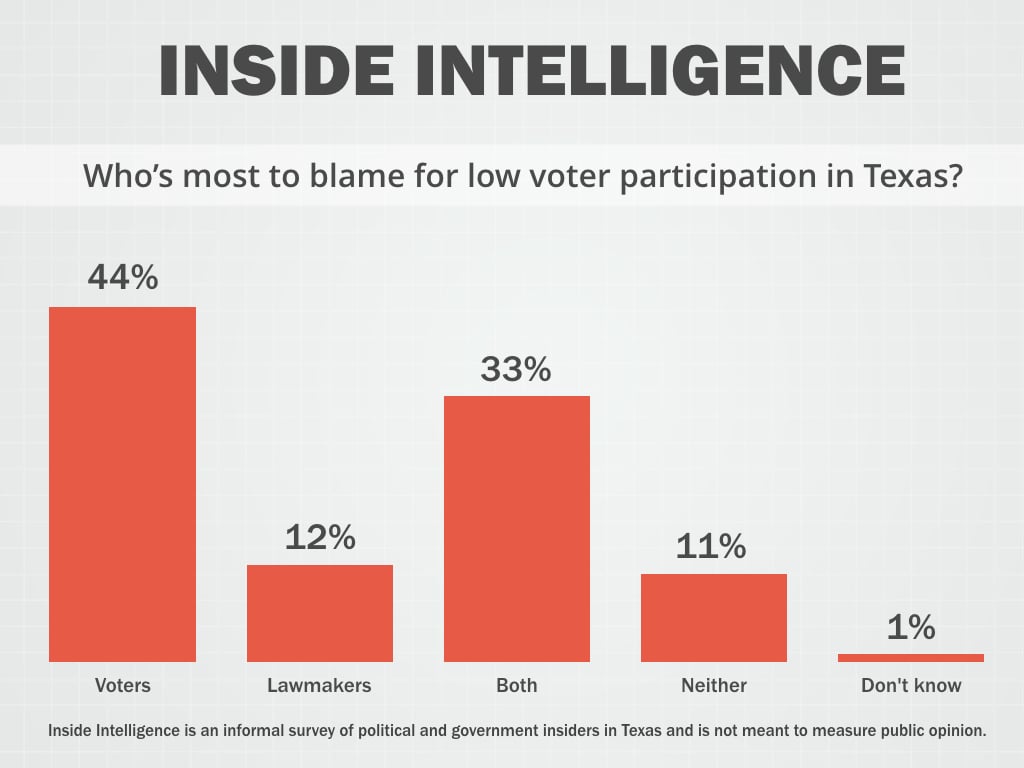 Who's most to blame for low voter participation in Texas?

• "Only the people who don't vote. The only way we'll have better choices in the general election is for greater participation in the primary process... oops, that yielded Trump and Hillary. Perhaps low turnout is not so bad."

• "Packed and cracked districts means little competition outside a few how far to the right can I go without falling off the edge of the earth contests, which in turn suppresses moderates and voters who can read without moving their lips."

• "When your state is doing better than most every other state on most things, there is no motivation to 'throw the bums out.' If people wanted to change things, they would get out and vote for it. It is a little known fact inside the Austin bubble, but the majority of Texans, in both political parties, generally agree with the policies the state leaders and legislators put forward."

• "The Legislature has created impediments to voting. We also have many citizens not eligible to vote. Further, even those who are qualified become confused in the registration process and in casting their ballots. We need to make it easier to participate in democracy, not more challenging."

• "There are plenty ways to vote, my own spouse forgets to vote when the kids dominate life." 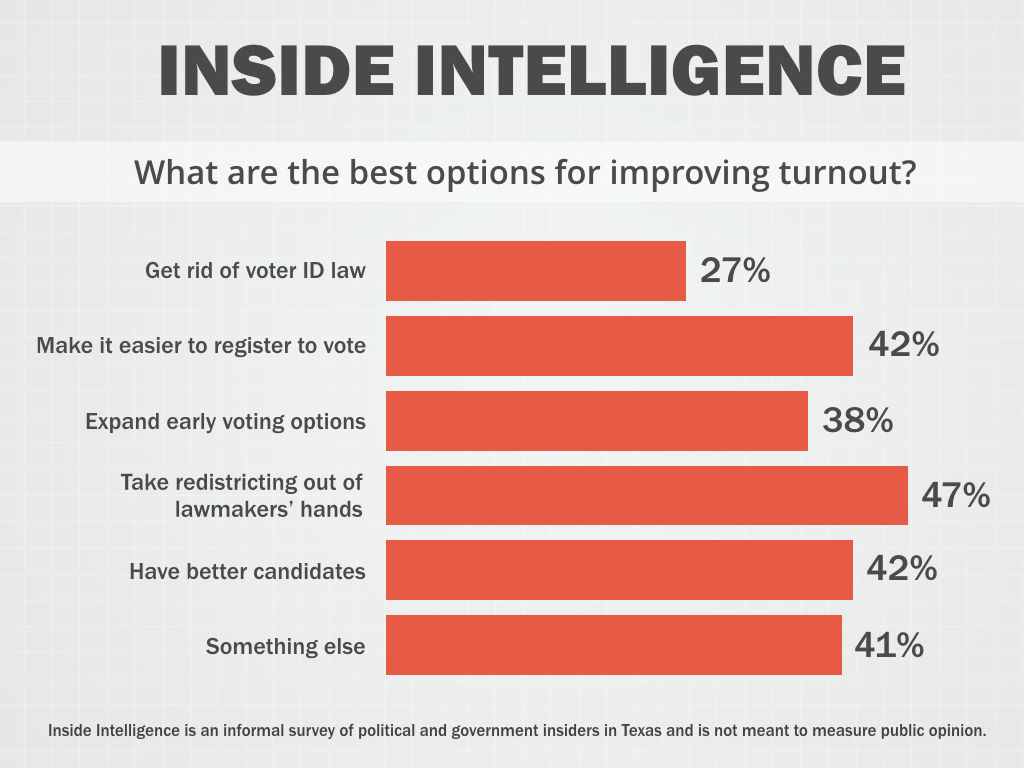 What are the best options for improving turnout?

• "Increased voter turnout is but one byproduct of taking redistricting out of legislators' hands. The other is a more civil, working body to get things done. When only eight to 10 House seats and zero of 16 senate seats are competitive in elections, there is no interest by lawmakers to fight for the middle. Sixty percent-plus R and D districts are not helpful to election turnout or lawmaking."

• "Turnout doesn't need to be encouraged. It is itself a valuable metric of governing effectiveness and should be viewed as such."

• "Term limits that result in having people still motivated to change things rather than career politicians who went from eager, sleeves rolled up, and bright-eyed to trying to maximize retirement benefit calculations."

• "I frankly think fixing redistricting is the single most important thing we could do to improve politics and government in the state and country. The overwhelming number of 'safe' gerrymandered districts is pathetic and obstructs real democracy. I also am a realist. I understand we can never expect the Legislature to write themselves out of this potentially existential function. It is a real dilemma."

• "Free Whataburger with each 'I Voted' sticker" 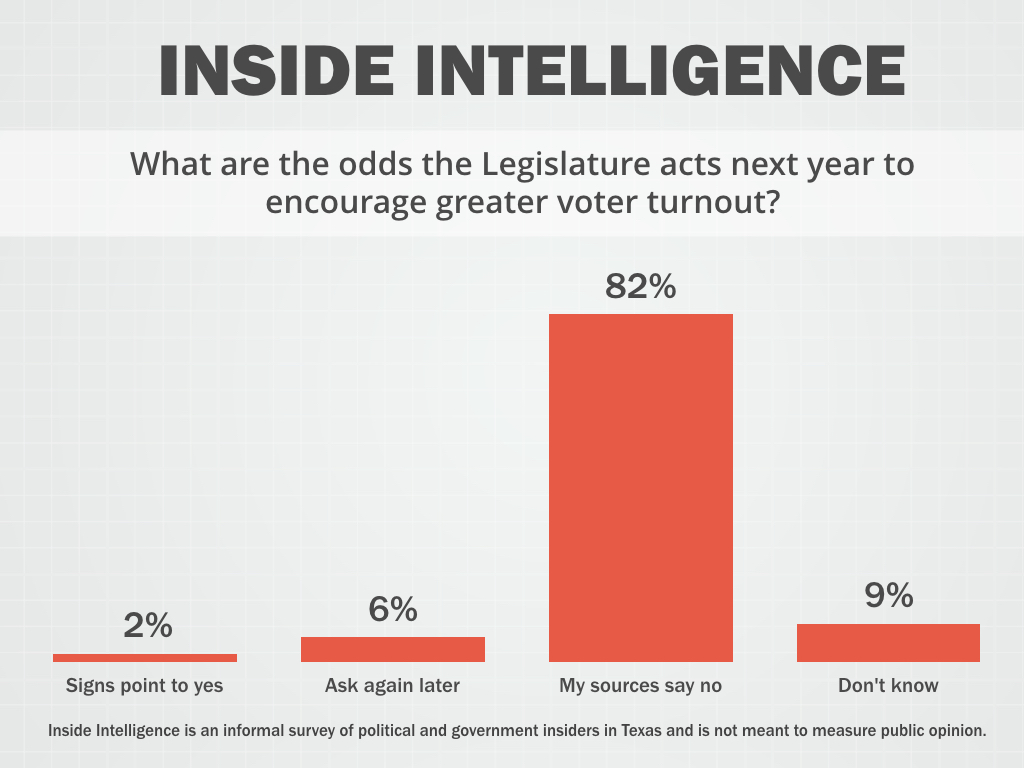 What are the odds the Legislature acts next year to encourage greater voter turnout?

• "Turnout is the No. 1 fear of Republican lawmakers. I expect that they will continue to push for more, not fewer, restrictions."

• "Legislators encourage voters to turnout all the time — they have knocked on thousands and thousands of doors all over Texas this past year. They spend millions on mail, television and radio ads — they speak to people every night of the week begging them to vote. They call them on the phone and they get robots to call them too. The notion that there is some conspiracy among Texas leaders and legislators to hold down voter turnout is just nuts."

• "It is NOT the responsibility of the Legislature to encourage people to vote. Like eating, it is the individual's responsibility."

• "Trump expedited the demise of Texas Republicans by a decade. Voter suppression is all they have left."

• "This question is dumb. People don't vote because our culture is narcissistic, lazy and prefers crap like 'Dancing With the Stars' and 'Housewives.' Let's create a high quality K-12 education system that teaches civics not liberal social engineering crap. Then maybe we will see change."