For this week’s nonscientific survey of insiders in government and politics, we asked about Labor Day and the kickoff to the sprint to the November elections.

With the way that the presidential contest has dominated headlines for more than a year, we thought it would be good to start this week's survey by asking whether Labor Day still keeps its relevance as the traditional kickoff of the general election season or if that designation is more relic than relevant.

Nearly two-thirds of the insiders said the Labor Day holiday still serves its role of focusing attention on races, especially those down-ballot. About a third thought the conventions are the true kickoff to the general election season now.

We next asked if the lengthening presidential election contest helps or harms voters' ability to pick the best leader. About half the insiders said the length of the election harms voters while about a third said it helps. 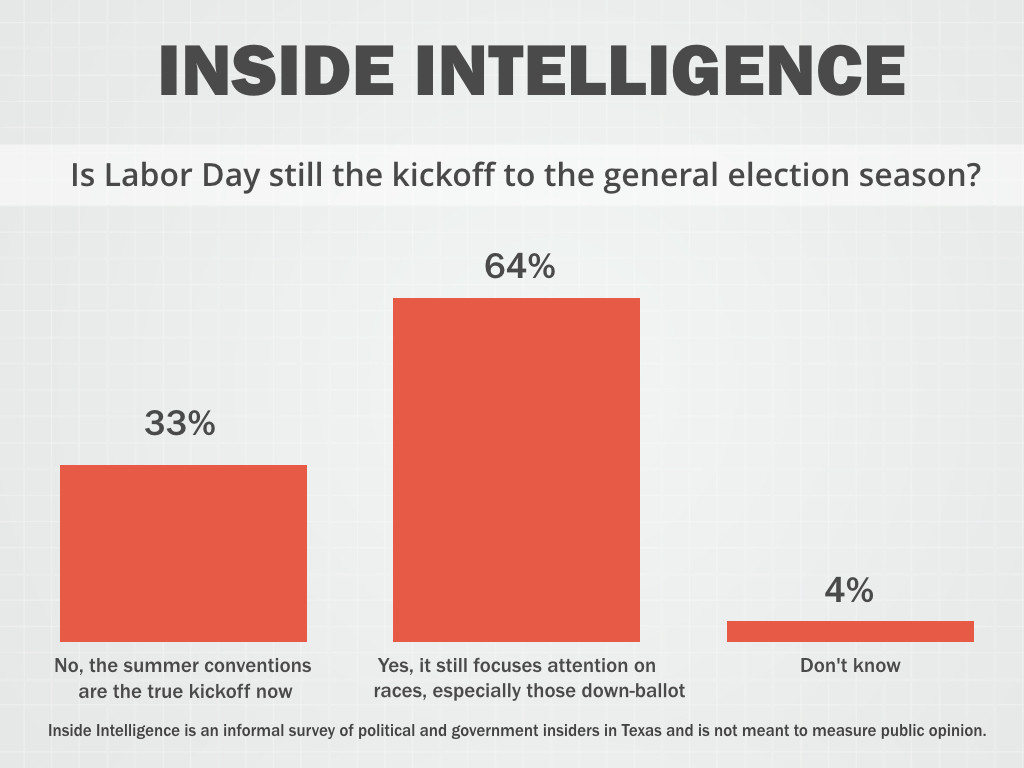 Is Labor Day still the kickoff to the general election season?

• "Media might push agendas, and candidates might be out there doing candidatey things, but the overwhelming majority of voters aren't paying attention until after Labor Day."

• "Before Labor Day, a candidate can sink his or her campaign by doing or saying something stupid — which will be used by their opponent later. After Labor Day, the general public starts to pay attention, and those mistakes from earlier times come back to haunt candidates. It's always been that way."

• "The insider class always overestimates how much real people are paying attention to elections and candidates. It's not that they are dumb or disinterested; it's just that they have lives." 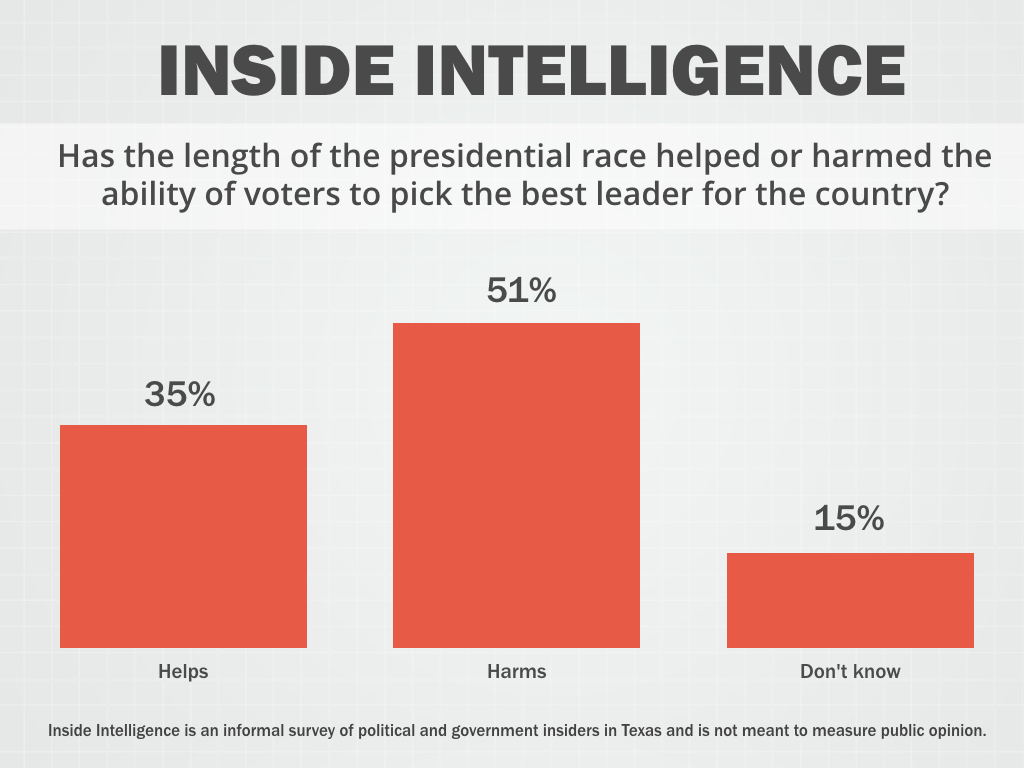 Has the length of the presidential race helped or harmed the ability of voters to pick the best leader for the country?

• "It usually helps in that voters get a bead on the character and qualities of each candidate over a long period. Short campaigns can be more easily scripted."

• "I don't think it helps ... voters are smart enough in the end. Doesn't hurt except having to endure it."

• "Harms democracy by discouraging any serious person from paying attention. The long season attracts the wrong candidates — having the stamina to repeat the same thing a thousand times while holding a phony smile is not a presidential trait. The long season is also why it is so expensive."

• "I think the 24-hour news cycle, more than the length of the presidential race, has harmed voters. The news requires conflict, and when it isn't there, they make it up."

• "The length of the term is irrelevant — it's the constant coverage of the campaigns and the fracturing within the two-party primary system that I believe has harmed the voter's ability to consider the 'best' leader for the country." 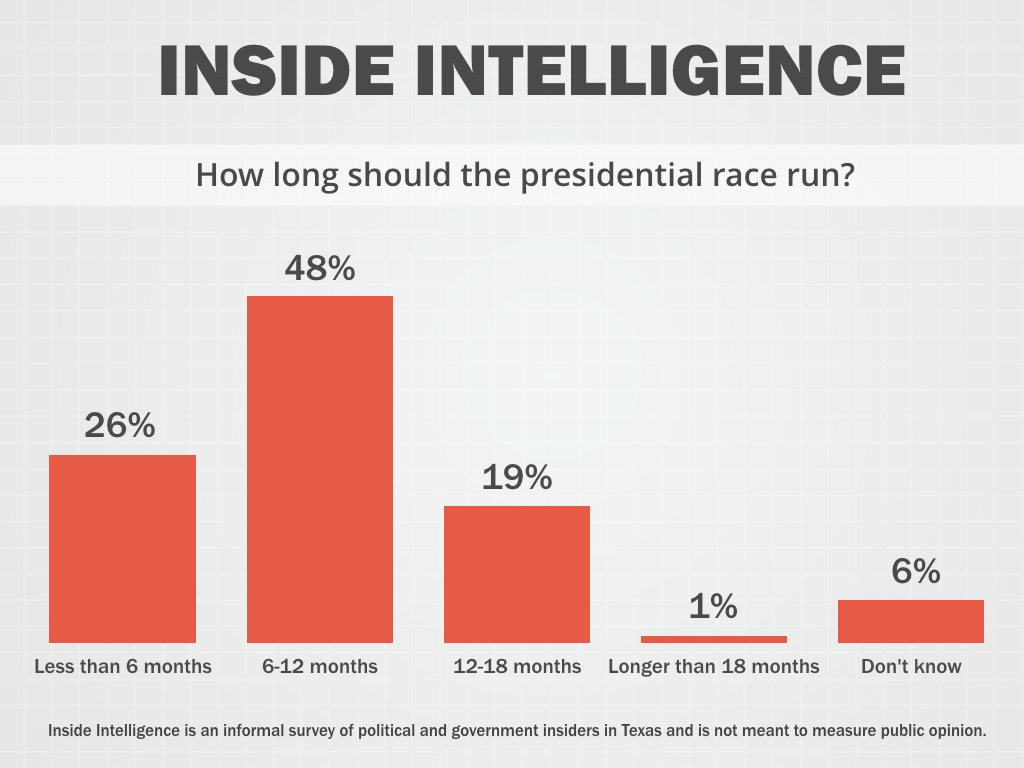 How long should the presidential race run?

• "Your question is impossible to answer. People are already planning for 2020. Do you mean how long should it run in the public eye? Primaries are important so it is at least two years of campaigning so they can win those Iowa primaries."

• "Many countries manage with six weeks."

• "The way it is now — the honeymoon is over before you get to the altar!"

• "As a political consultant, I'd say continually. As a voter, I'd say less than six months."

• "If you can't make the case for why you're the best, most qualified candidate in 6-12 months, then something is wrong with you as a candidate and/or your ability to persuade voters." 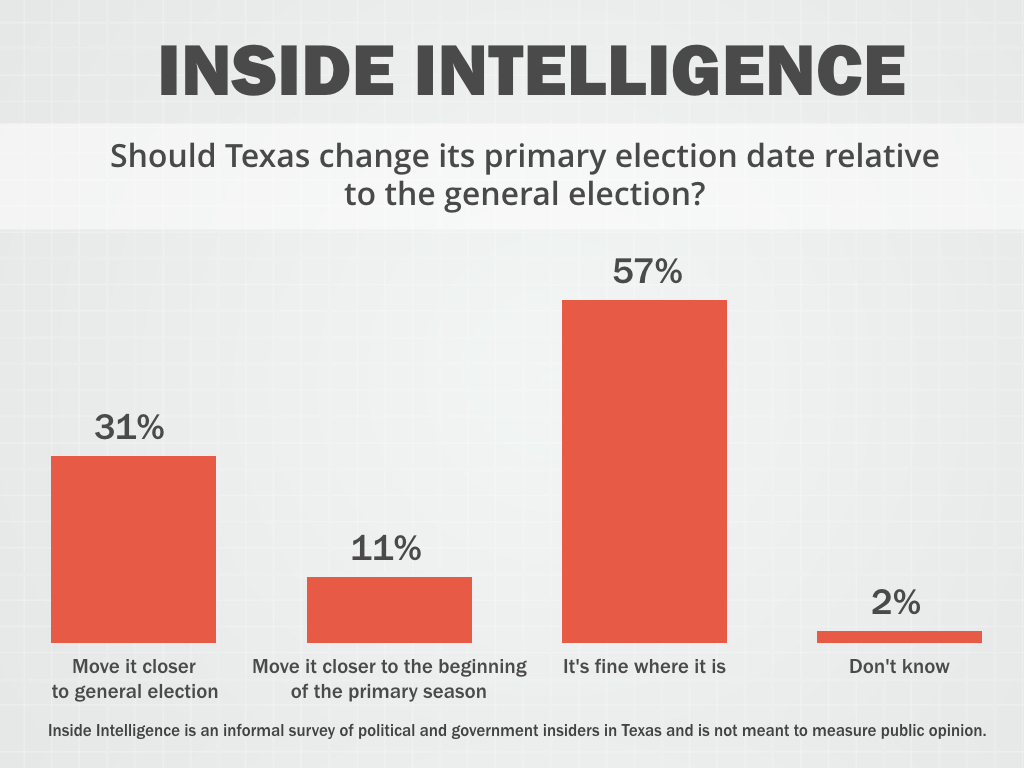 Should Texas change its primary election date relative to the general election?

• "For such an important state, it has always been a wonder to me why it doesn't have larger role in the primary season."

• "Current early primary date acts to protect incumbents. Since nobody pays attention during the previous year, the race starts in early January as a practical matter and lasts less than two months. That's usually not enough time for a challenger to make his/her case. Cruz would not have beaten Dewhurst if the original primary date had held."

• "We need time to rest (and heal) after the primary."

• "Thanks to redistricting, most primaries are the 'real' election. Moving them back to the summer/early fall would help voters and result in better outcomes."

• "Texas should follow the lead of most states and hold a separate presidential primary, earlier than state primary elections. Our primary now is way too early for anyone to be interested in the contests. We should go back to the fourth Saturday in July (used from 1906-1958) or at least the first Saturday in May (1960-86)."