For this week’s nonscientific survey of insiders in government and politics, we asked about the coarsening political discourse.

We started by asking whether the political climate is worse than usual this year. Nearly four in five of the insiders agreed that things are worse this year.

When it comes to assigning responsibility for this decay in decorum, politicians were cited by 30 percent of the insiders. Another 20 percent blamed politically active media and 19 percent named political operatives. The mainstream media were deemed culpable by 16 percent.

A protest last month on the UT-Austin campus against the state's campus carry law drew headlines for the unorthodox use of sex toys as political speech. We asked if the outrageous nature of the protest helped or harmed the cause of the campus carry protesters.

On the final question, we asked if the polarizing nature of the presidential contest helps ensure that next year's legislative session will be politically bruising. 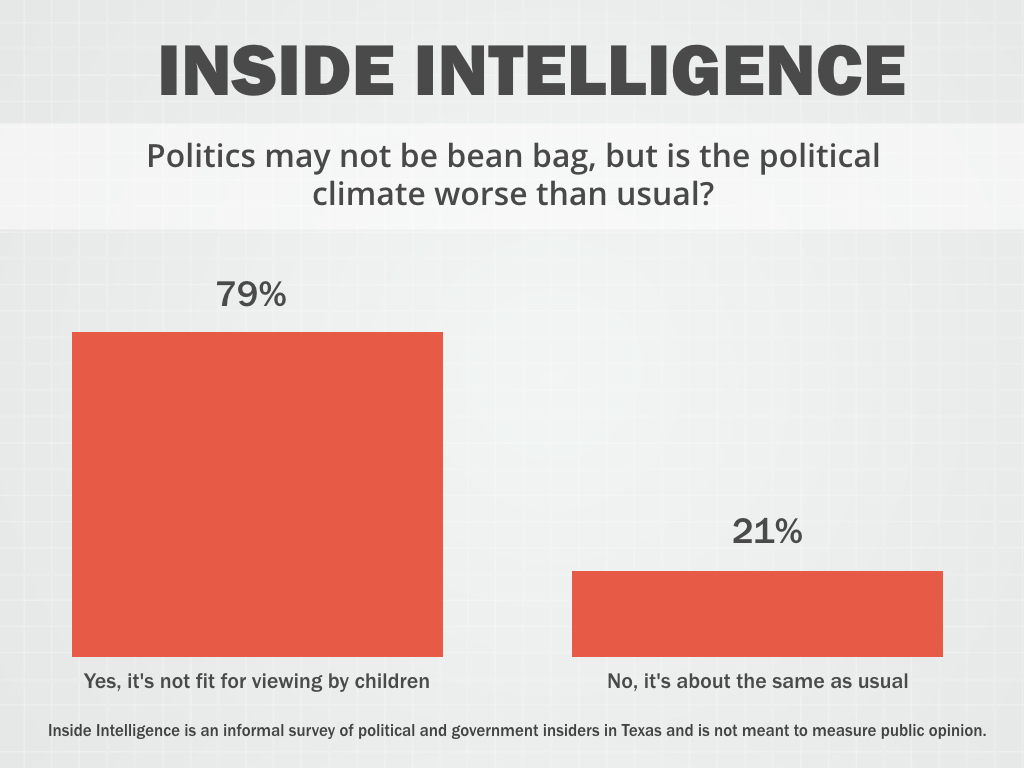 Politics may not be beanbag, but is the political climate worse than usual?

• "The current climate may seem worse than usual only because it is playing out in the social media theater. In days of the past, the muckraking remained anonymous, and you never knew the real thoughts of your 'closest friends.' Our keyboard courage has changed our anonymity."

• "Please don't say the 1800 election was this bad! The politics of contempt that began with the Clinton scandals and the MoveOn.org people has infected the politics of both sides."

• "Every cycle people complain about nasty politics. Sam Houston called his opponents thieves and murderers, John Q. Adams was called a pimp and Abraham Lincoln was called a baboon. There is nothing new under the political sun."

• "The problem in the presidential race is not the tone or the tactics; it is having two of the absolute worst major party nominees in American history on the ballot at the same time." 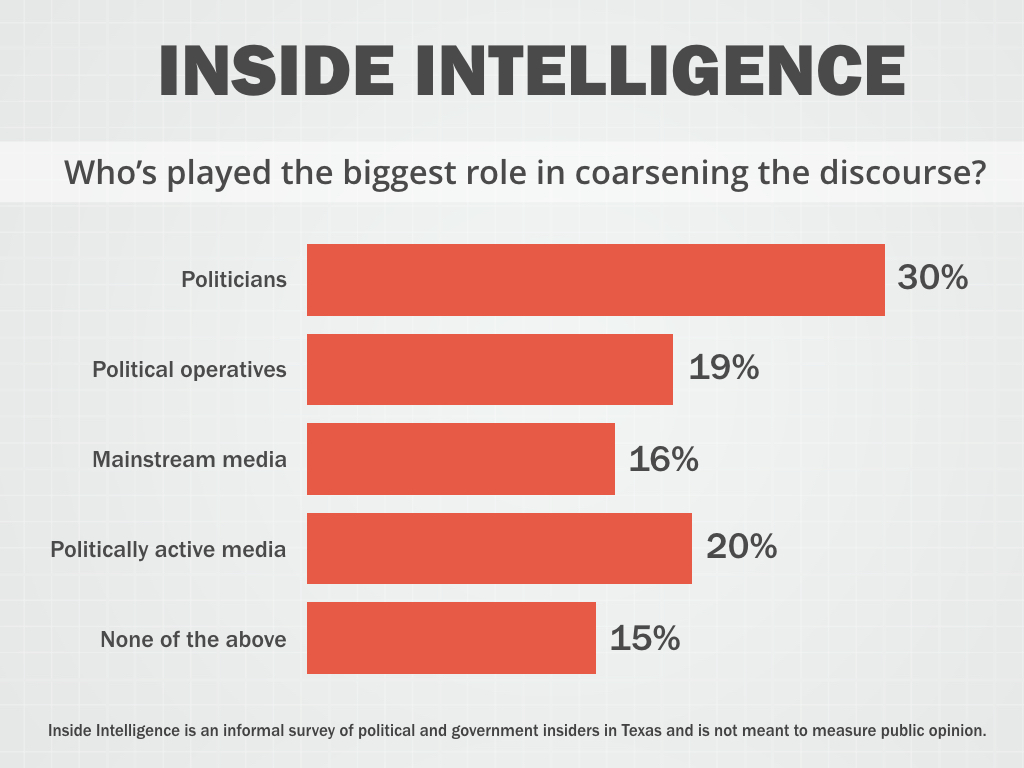 Who's played the biggest role in coarsening the discourse?

• "Political operatives know that civil discourse does not motivate people to vote for or against their candidate. The overarching message of all political communications is that the opponent is evil and will destroy our democracy and life as we know it."

• "Politicians have promised too much, and failed to deliver. They are apparently controlled by lobbyists, not the citizenry. That's the main problem in our political life today."

• "Redistricting helped create this mess! While districts have always been drawn in a partisan manner, politicians desire for 80-90 percent partisan leaning districts — for their own political survival — is not conducive to middle-of-the-road policies and politicians."

• "The 24-hour news cycle combined with relentless axe-to-grind 'reporting' are killing all of us. People's reactions (on both sides) are reasonable in the context of what they are hearing from their media of choice. But all significant modern 'news' sources have devolved into the high tech equivalent of yellow journalism. I don't know what the path was from William Randolph Hearst to Ben Bradlee, but I hope we can find a similar path forward with the new media."

• "'None of the above?' Try ALL of the above. It takes a village to run a country's electoral system into the ground." 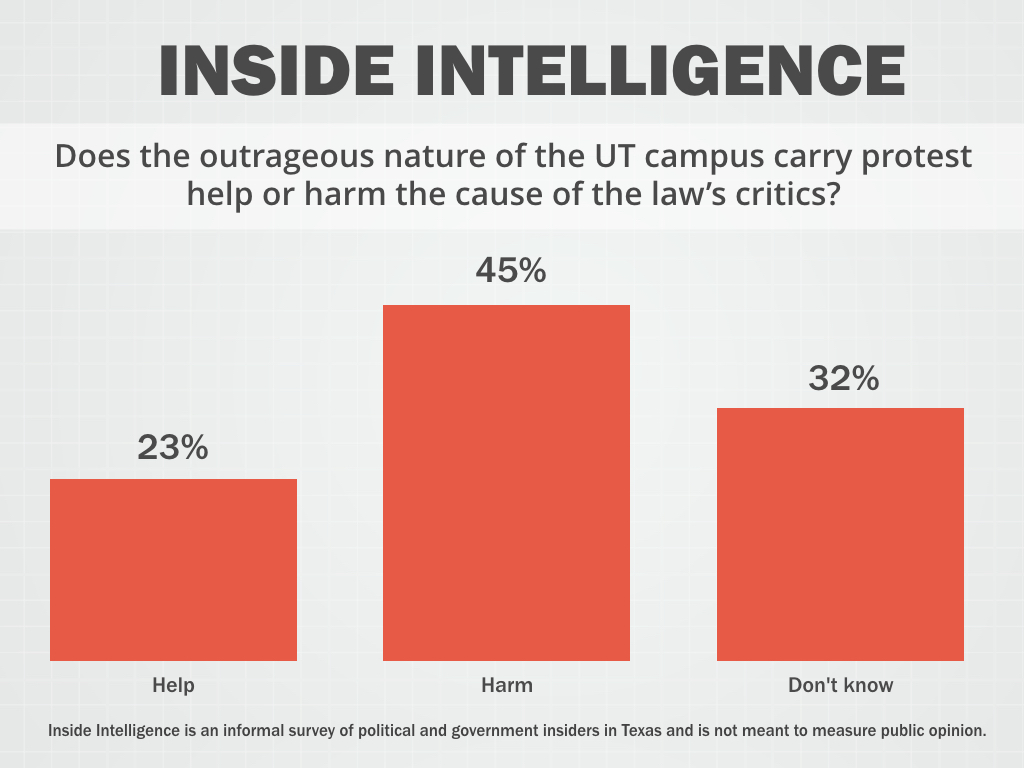 In the case of the UT student sex toy protest against campus carry, does the outrageous nature of the protest help or harm the cause of campus carry critics?

• "For those who get irony or Freud, it helps. For the irony-free zone non-thinkers, it harms."

• "Neither. The NRA will soon market a dildo-shaped gun."

• "Regardless of your position on guns, this protest is juvenile and stupid. Shame on the media for giving it so much coverage."

• "As foolish as they looked, they drew attention to their cause. (Not that it's going to have any impact on the Texas Legislature.)" 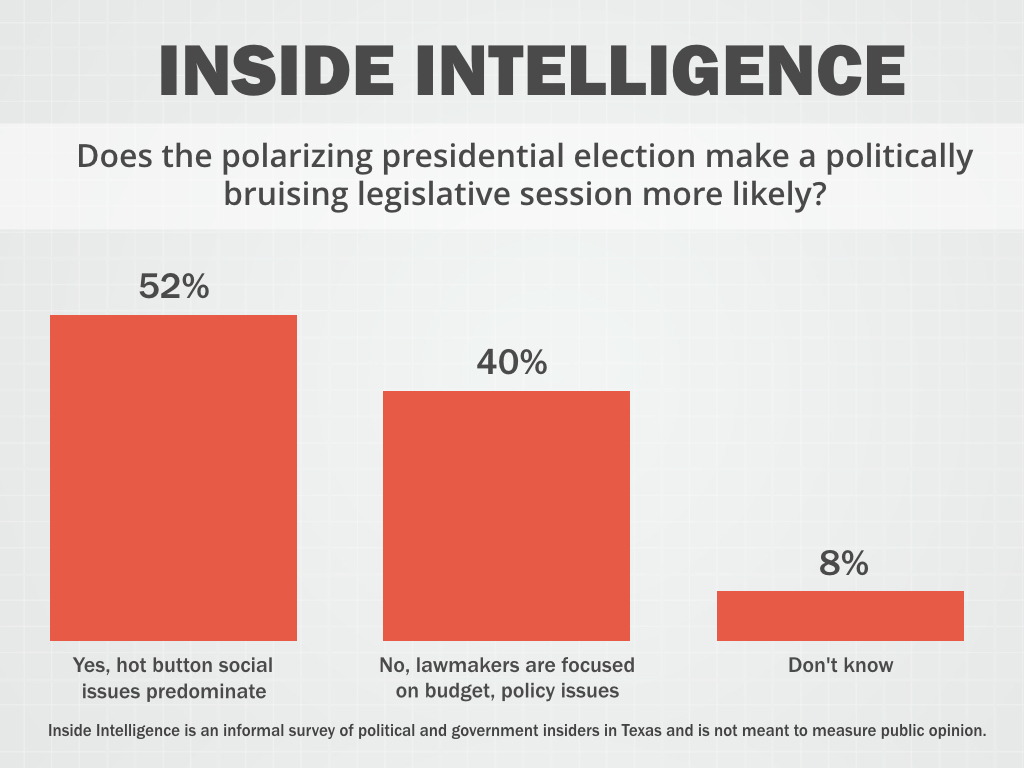 • "Urban Republicans (URs) are now at the same crossroads that East/West Texas Democrats were in the 90s. Can they remain part of a party that has lost touch with the values of their district? If the URs happen to survive the general, they will be in a predicament on whether or not to support hot button social issues."

• "As former Lt. Gov. Bill Hobby stated, 'the legislative process is 90 percent about the budget and the 10 percent is poetry.' The budget will be the big issue but, with the lack of money, social issues will be good political fodder because the members will not have a lot of opportunities to do things that are meaningful. Last session, the state had an abundance of money and the leadership had a difficult time getting on the same page. Imagine how it will work with no money to fund the leadership's priorities. Special Session!!!!"

• "Not in Texas. The Houston delegation will bipartisanly fight the Dallas delegation for money just like they always do ... and so on and so on."

• "Neither. The Donald is a rare and odd occurrence that won't have much lasting impact on Texas state politics. But the election of Hillary will recharge the batteries of the 'Washington is evil' agenda. Get ready for four more years of vigorous Texas federalism."

• "Some will still try to be the legislative equivalent of Robert Morrow. Legislators need to respect the office they were elected to instead of being part of a group of anarchists."