For this week’s nonscientific survey of insiders in government and politics, we asked about Donald Trump's recent course corrections.

With the first question, we asked which of the Trump campaign's new tactics stand to benefit the GOP presidential nominee the most. By far, the most popular new approach was ditching his off the cuff speaking style in favor of greater use of the teleprompter. That was named by 43 percent of the insiders.

Next on the list was the modification of certain core positions, such as on immigration, listed by 12 percent. Following closely behind was his admission that he's said the wrong things at times (9 percent) and replacing key staff with more conservative voices (7 percent).

A hefty 30 percent, though, didn't think any of these new tactics would benefit Trump much.

Trump also made headlines this week for holding campaign events in Texas and Mississippi, where he is virtually certain to win, in lieu of travels to battleground states. We asked the insiders to evaluate the campaign strategy.

Fully 44 percent said they agreed with Trump's decision for both fundraising and for attracting headlines. Another 26 percent thought the travel was a good idea but for fundraising purposes alone. Just 5 percent thought Trump's choice of travel destinations was good just for the publicity.

Another 22 percent didn't think the Trump campaign made the right decision in focusing their attentions on red states this week.

A new opinion poll out last week got attention for its finding that Trump was leading Democratic nominee Hillary Clinton by just 6 points. We closed the survey by asking the insiders to evaluate the relative accuracy of the results. 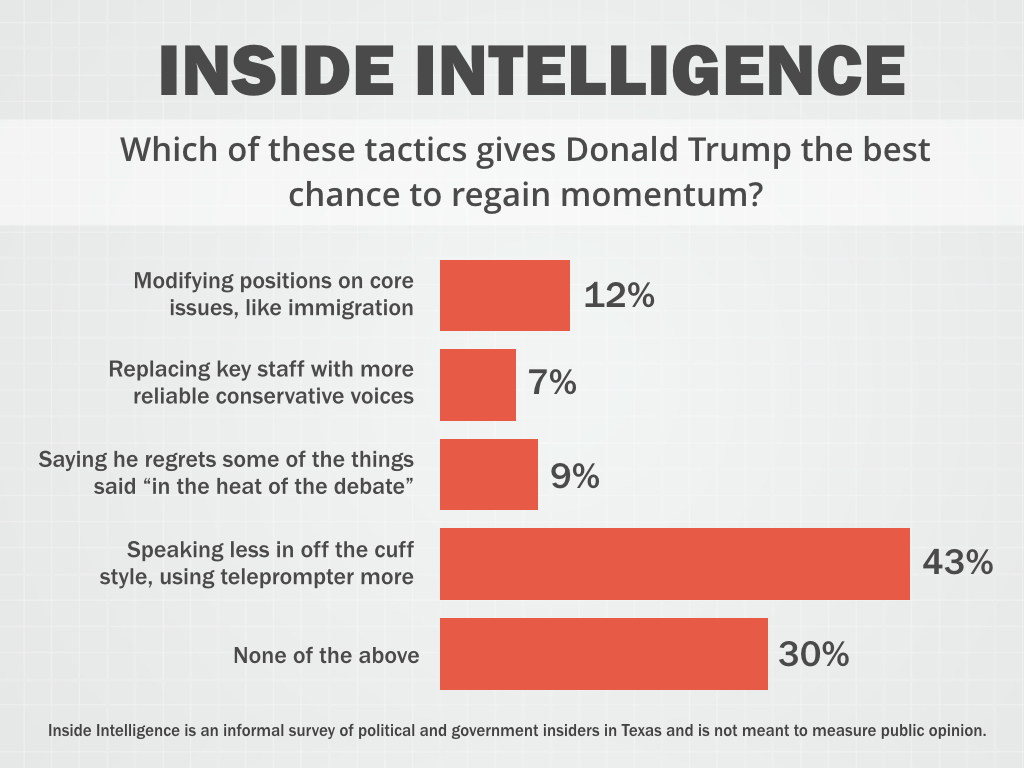 Which of these tactics gives Donald Trump the best chance to regain momentum?

• "Needs to keep focus on HRC email and Foundation scandals. Outreach to disaffected GOP would only be modestly successful at this late point."

• "Trump can't regain the momentum. I don't even think he wants it. He wants to go down as a colorful martyr. The Presidency is a bitch of a job. It's way less fun than game shows."

• "It's too late and the only momentum he would regain is with white, over 50 men. There aren't enough of them to get him elected."

• "Time has run out for Trump. What got him the nomination will not win the election. If he becomes more presidential now, he could disappoint his base — the very people that got us into this mess and are responsible for the election of Hillary Clinton." 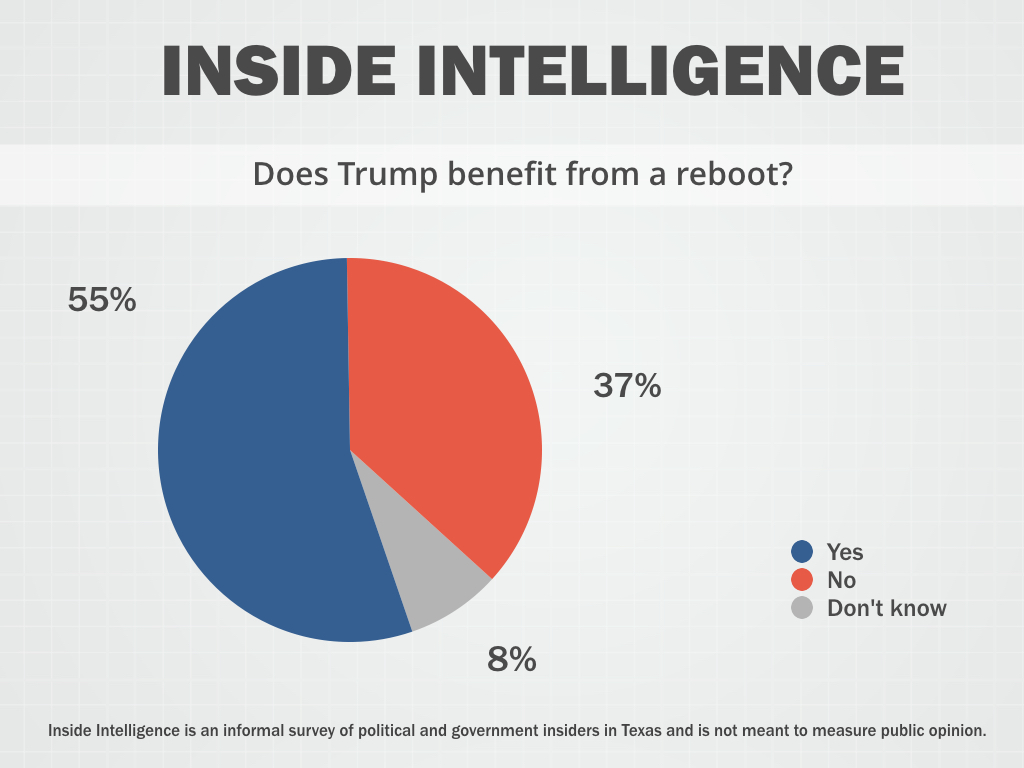 Does Trump benefit from a reboot?

• "He will benefit from limiting his daily rants to maybe two per week. Doing so, will leave the media with no choice than to cover the Clinton scandals."

• "Trump needs the support of true conservatives. He's never been one, so he must reach out to us, starting with the Cruz family."

• "You only get one chance to reset. If he tries to reset now, it will be the second or third? It's hard to keep up with them."

• "Reality is he can keep saying what he wants and win. The little people are pissed and there are more of them than the elites. Let's start with a key political indicator, Brexit..." 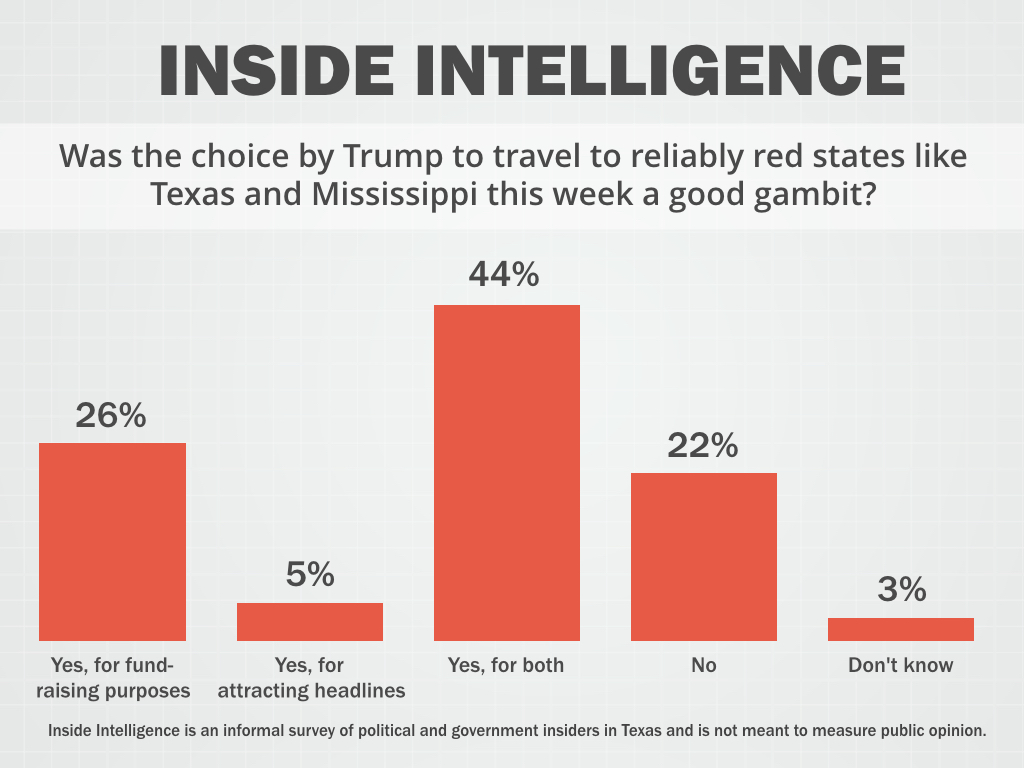 Was the choice by Trump to travel to reliably red states like Texas and Mississippi this week a good gambit?

• "He left Texas with more money, more votes, and more press than Hillary had this week."

• "Ground game is important, but the candidate's appearances are national. As long as one is having a fundraiser, why not go meet the troops? The concept of a candidate limiting his or her travels to 'battleground' states, at least in August or September of an election year, seems outmoded to me."

• "Smart to pick up as much cash as possible in friendly states, assuming he plans to be in the swing states in the fall." 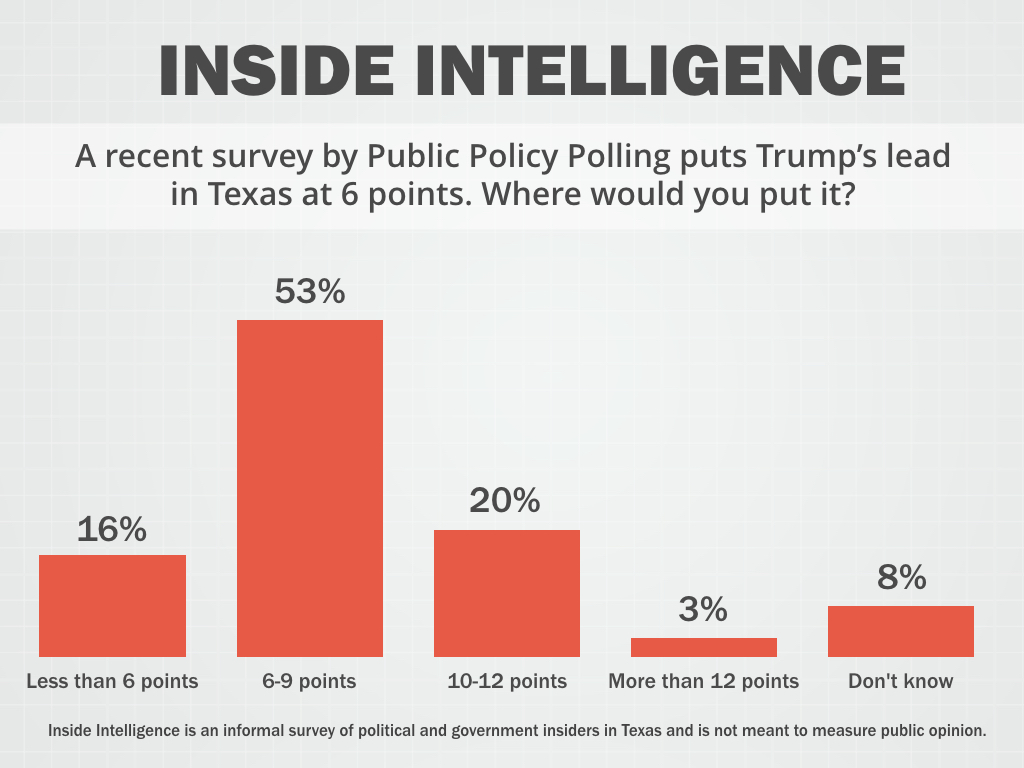 A recent survey by Public Policy Polling puts Trump's lead in Texas at 6 points. Where would you put it?

• "If Trump can't win Texas, the GOP is in for its worst defeat in the modern era. And this is to the biggest liar the Democrats have nominated in my lifetime."

• "Trump's margin over Clinton in Texas is less than six points right now, but it seems reasonable to assume that the margin will increase a bit before voting begins. However, that assumes that Trump doesn't do too many more phenomenally stupid things, so I'm not giving odds."

• "He'll win Texas, but the Libertarian candidate is likely to get significant support."