For this week’s nonscientific survey of insiders in government and politics, we asked about the down-ballot effect of Donald Trump in Texas.

Nearly half the respondents said the GOP presidential nominee would have "a measurable effect" on down-ballot races in Texas with another one-third of the insiders saying that Trump wouldn't have an impact on Texas races.

We then offered a handful of prominent Texas Republicans (and one prominent outside politician) and asked which of those was proving most adept at managing any Trump effect in the state.

We then pivoted to a couple of questions about Cruz, Trump's most prominent non-supporter in Texas. We began by asking if his convention speech, in which he pointedly did not endorse Trump, guarantees him a challenger in 2018 when he is up for re-election.

If he were to get a primary challenger, though, 37 percent of the insiders thought the challenge would come from Austin Congressman Michael McCaul while 25 percent thought Patrick would enter the primary. 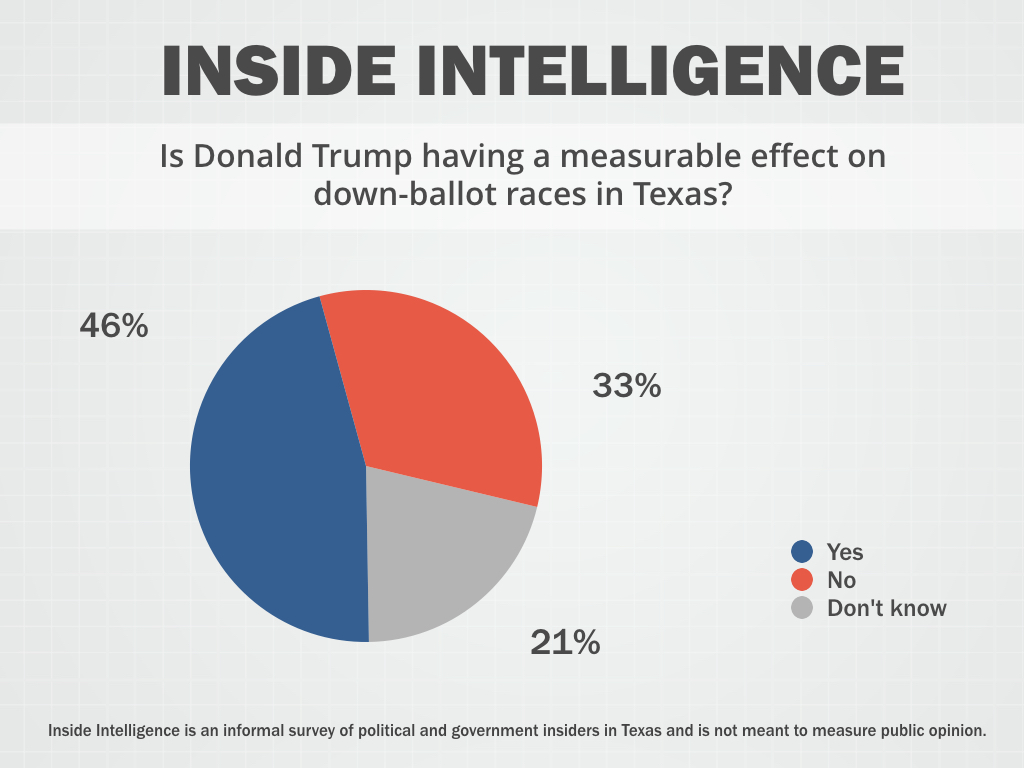 Is Donald Trump having a measurable effect on down-ballot races in Texas?

• "Answered 'yes,' but who the heck really knows? Haven't found any precedent for this bizarre election cycle."

• "Let's hope so. If the Ds can't make progress with Trump on the top of the opposite ticket, it'll be decades before they can control the state."

• "Yes. He's helping to separate the men from the boys. The men are ready to saddle up and get on board. The boys are wringing their hands trying to figure out why their candidate didn't win the primary."

• "Too early to tell. I recommend asking the question again in late September." 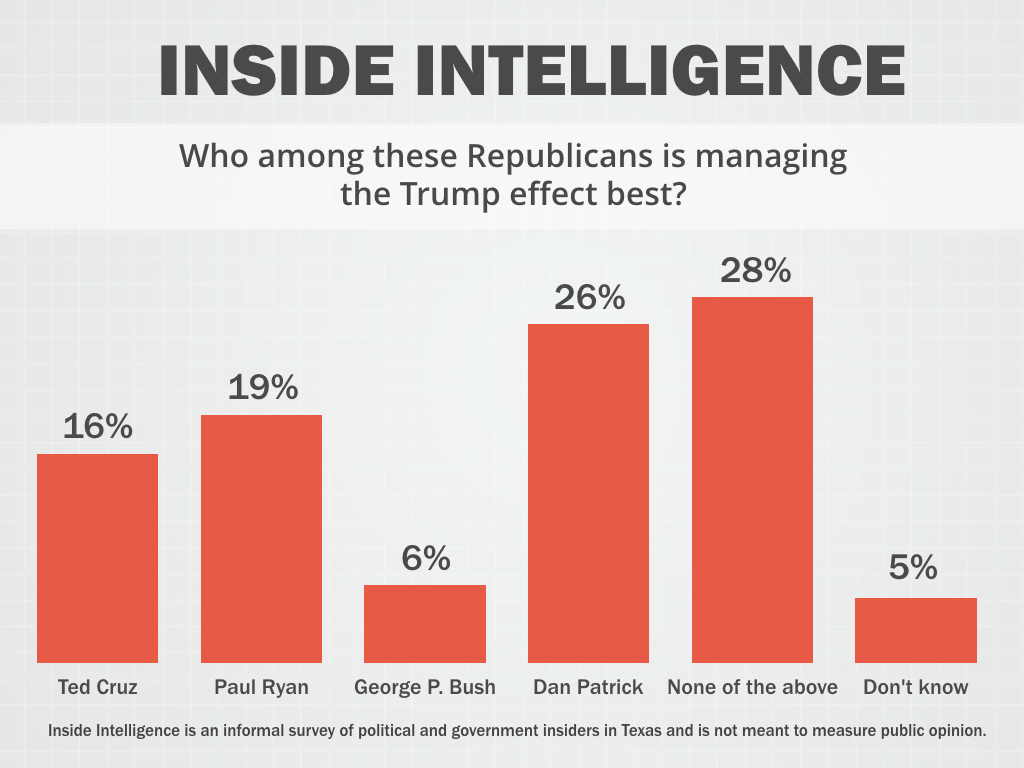 Who among these Republicans is managing the Trump effect best?

• "Patrick has stuck with the issues — pushing Texas priorities like border and choice. Others are distracted by the personality problems."

• "Cruz is going to look like a Profile in Courage."

• "Dan Patrick is working the situation with his usual finesse. George P. gets an honorable mention for stepping up and making the difficult call, breaking from the family and endorsing."

• "I think Ted Cruz looks smart for not endorsing someone that Republicans are running away from." 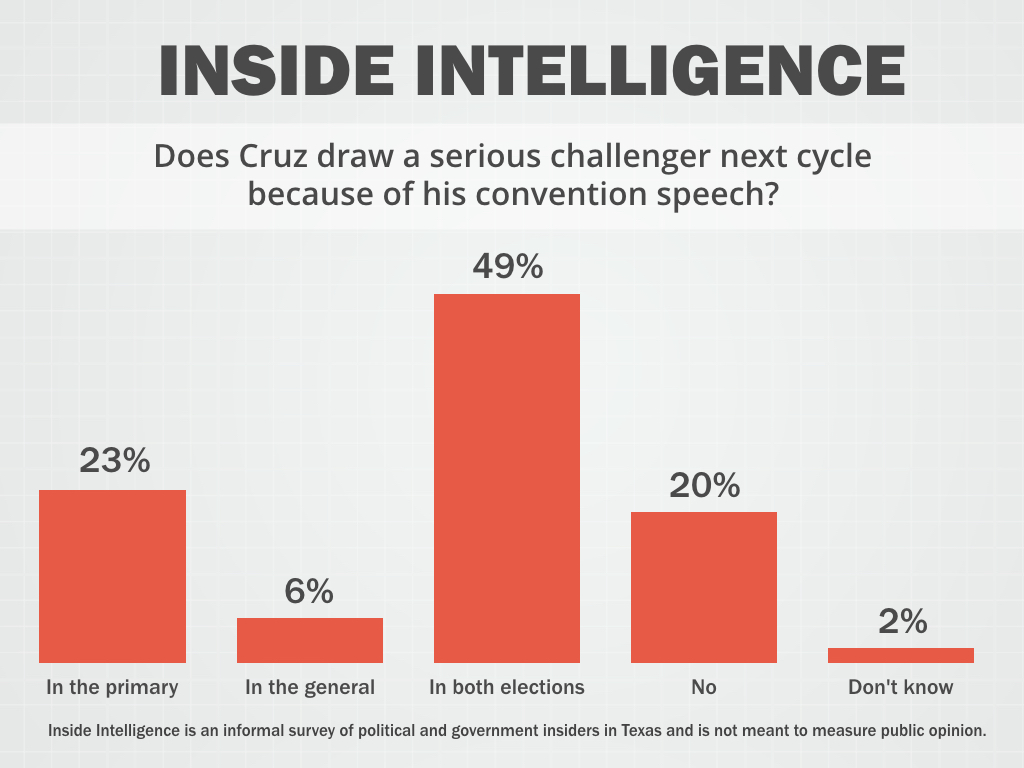 Does Cruz draw a serious challenger next cycle because of his convention speech?

• "Much depends upon what happens over the next 18 months or so regarding the primary. There will likely also be a 'serious' candidate in the general, who still will have no prayer."

• "Define serious? The better question is, can someone emerge who is conservative (we're still in Texas) but will be effective in a meaningful, positive way? I think the answer is yes. Money can't be the metric of seriousness — after all, anyone remember the dollar advantage Dewhurst had over TC?"

• "Depends is the only right answer now. If Trump gets swamped, Cruz won't be much hurt. If Trump runs close and wins or loses, Cruz will have problems."

• "When diehard grassroots question Cruz in public and don't care about repercussions, he left his flank open."

• "Ironically, his convention speech will be the example of the only time that Ted Cruz behaved like the adult in the room." 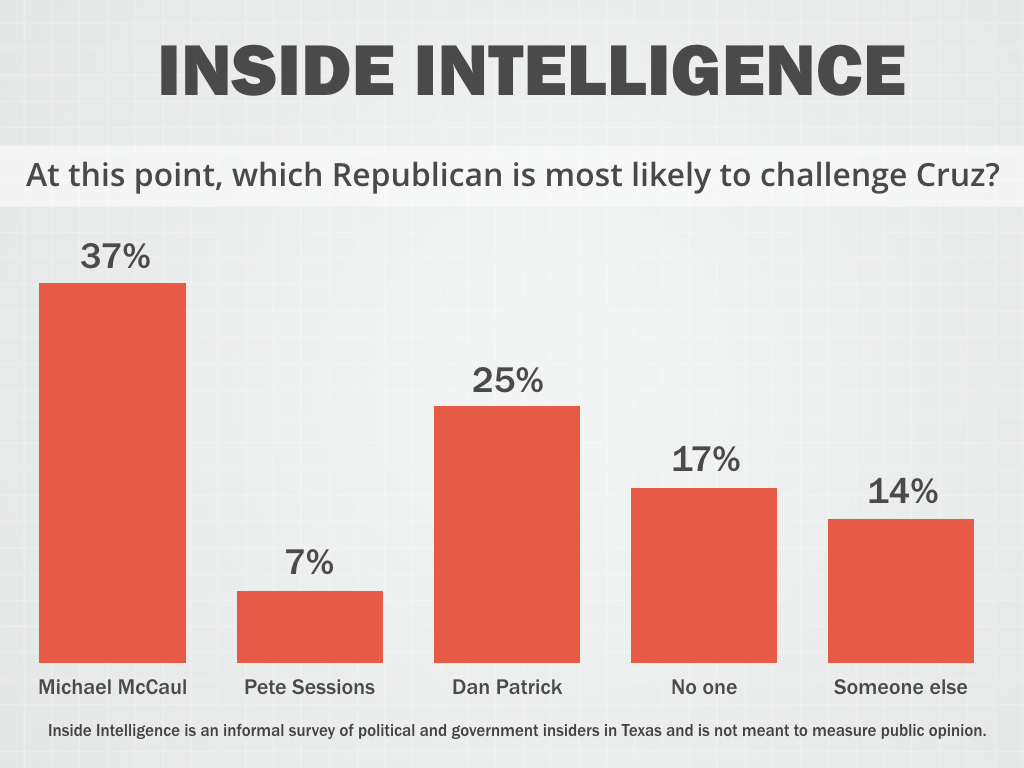 At this point, which Republican is most likely to challenge Cruz?

• "Don't know that McCaul jumps in, but he has all the tools to move up the food chain. He is a superb member of the House, and would make a terrific Senator — or President, for that matter. I'm a fan."

• "A businessman or woman outsider with no political experience."

• "Shakes out after November — Patrick, Abbott, the list could grow. Anyone who runs better get their big boy pants on and get ready to rumble. Team Cruz will do anything, use anything and say anything to keep that seat."