For this week’s nonscientific survey of insiders in government and politics, we asked about those recently concluded conventions in order to get some quick evaluations.

The insiders had a clear preference on which party did a better job peddling its message with its convention. Nearly three in four thought the Democrats did a superior job there.

We then asked how perceptions of each party changed as a result of the conventions. Perceptions of the GOP were mostly split between "no change" (33 percent) and "further conservative" (31 percent). Another 16 percent felt the party moved more toward the middle with the convention.

With the final question, we asked which candidate came out in the strongest position after the conventions. The Democratic nominee Hillary Clinton was the clear winner here, named by 72 percent of the insiders. 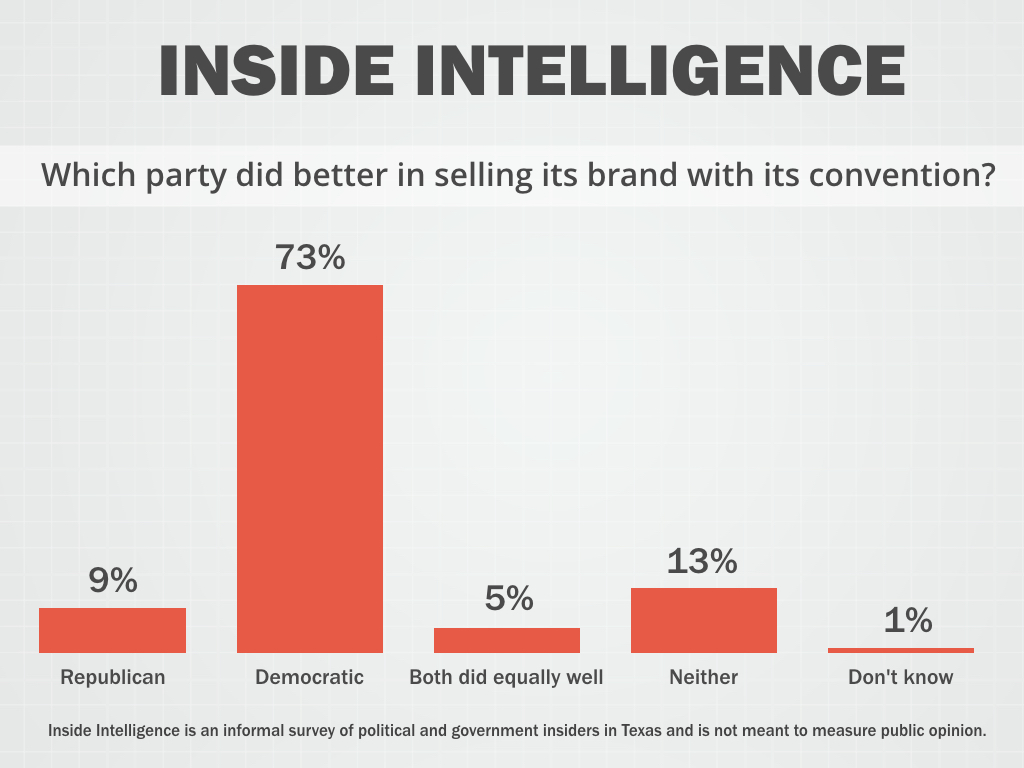 Which party did better in selling its brand with its convention?

• "Despite past actions and speeches over the years, Dems successfully portrayed themselves as pro-American."

• "The VPs were good for both parties (the presidential nominees themselves continue to stink) but the Ds got a bigger boost from theirs. Trump will need a miracle to pull himself out of this hole."

• "To the TV audience at home or to themselves? If to all us folks in TV land, then the D's were more effective exhorting the better angels of our nature. If to conventioneers, then it didn't move the needle one iota. To the 300K undecided in swing states, they are probably still wondering what to do with their vote."

• "Perhaps more inclusive, and some are more comfortable with Trump — unless he ruins it by saying stupid things. His family was phenomenal." 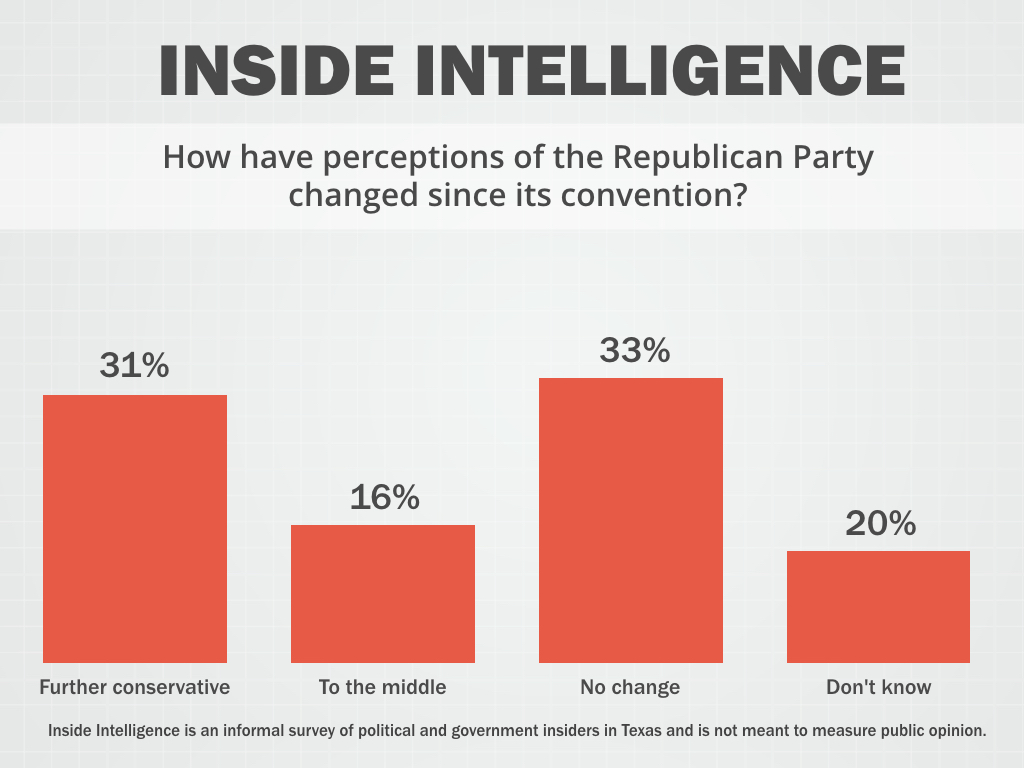 How have perceptions of the Republican Party changed since its convention?

• "Yes, it has changed since the convention. The No. 1 issue of concern, security, has increased in perception to the R favor. The perception of the leader has changed. Even worse. The question is, will No. 1 outweigh the other?"

• "The party known for discipline is now seen as disorganized and in disarray."

• "Attacks on the Khan family have severely damaged Trump and the Republican party brand."

• "It's hard to say what the Republican Party is anymore. I don't think we'll know until after the shock of a landslide defeat settles out in a year or so."

• "Trump is neither conservative nor moderate, so I'd say the view is that the party is more radical, but no one can really say in what direction. Anyone's best guess as to how he would actually govern..." 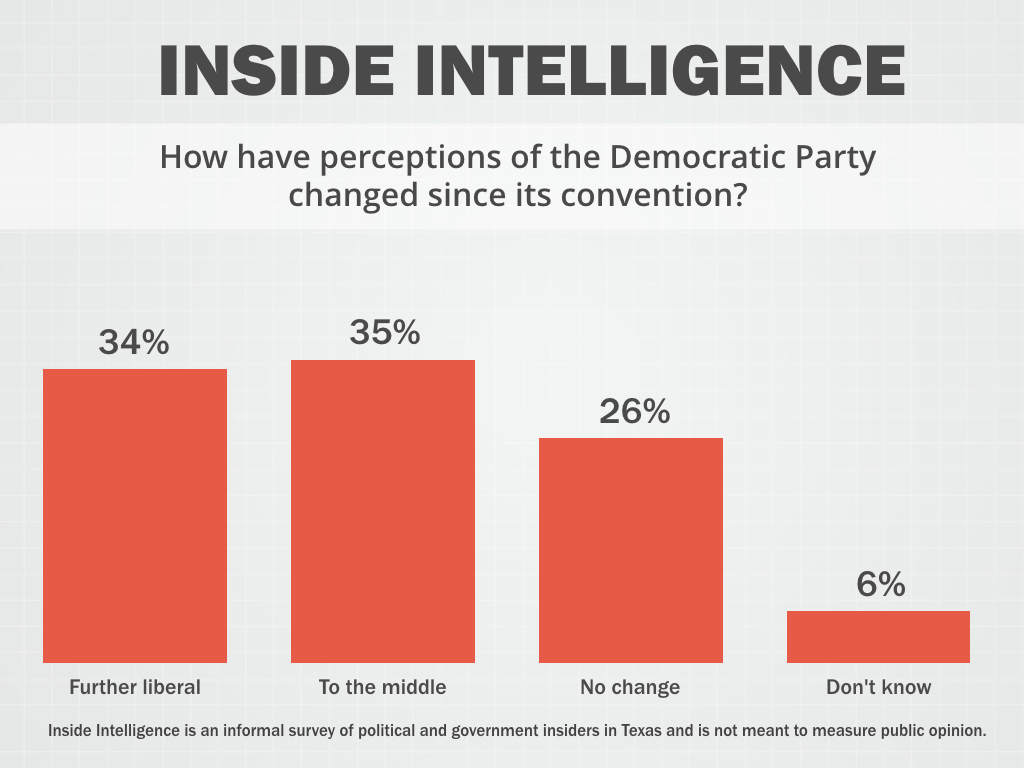 How have perceptions of the Democratic Party changed since its convention?

• "Common sense, practical — reasonable. A true party of the people — open and accessible to everyone. Not just angry white men."

• "I think it was all pretty transparent, but to the independent voter who is pretty conservative and not for Trump, who knows."

• "The Democratic message has been trending left for some time, and probably will for the foreseeable future. America is becoming increasingly dependent on government (more old folks and minorities) and those demographics will vote their self-interests, as we all tend to do. Demography supports a long-term trend toward both parties becoming more leftist than they have been in the past. If the parties truly want to win elections, that is."

• "This could be a problem for them. The Sanders folks will not let this go." 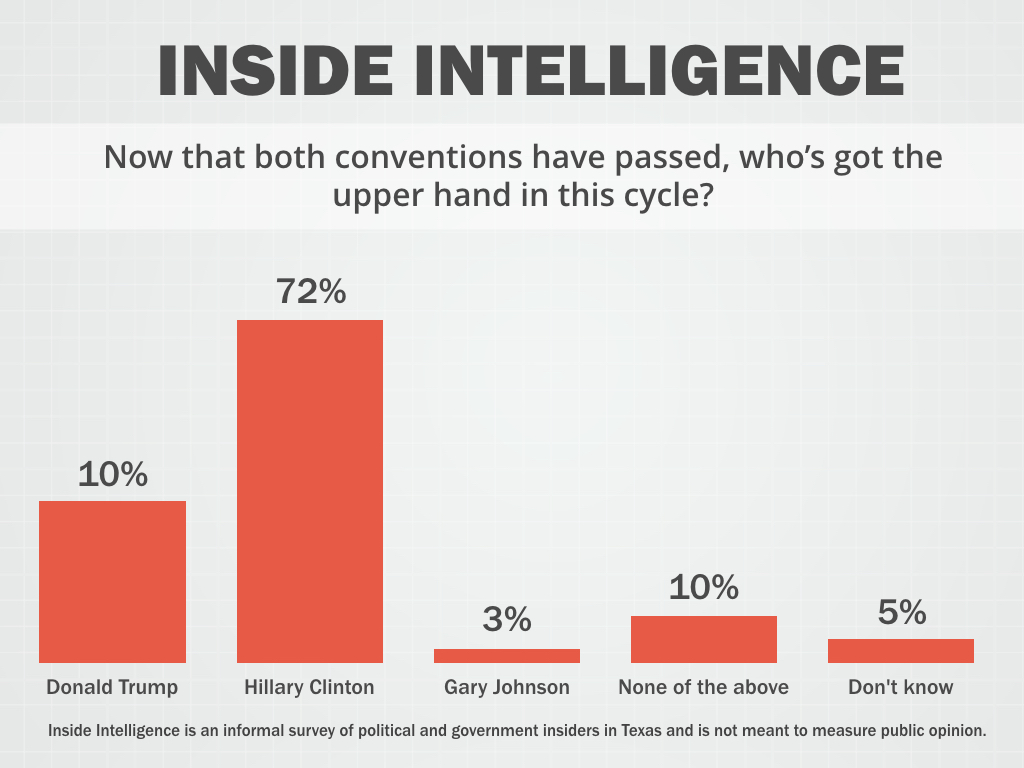 Now that both conventions have passed, who’s got the upper hand in this election cycle?

• "As much as I hate to admit it, but HC has the upper hand considering Trump can't keep his mouth shut without offending someone. His attack on the Khan family would have been a one-day story if he would have let it go, but no, he has to have the last word and that is going to be the demise of his campaign."

• "I long for the day when there is a candidate that I can truly support. This is pathetic!"

• "Columnist David Brooks called Trump a 'moral pygmy.' Good description, except for the insult to pygmies."

• "Noteworthy that Gary Johnson could make a difference in the outcome of the election if he gets more than 5 percent in Florida, Ohio or Pennsylvania. Presumably, his success would make it even harder for Trump to find a way to win these states."