For this week’s nonscientific survey of insiders in government and politics, we asked about this week's Democratic National Convention taking place in Philadelphia, Pennsylvania.

We followed the basic structure from last week's survey about the GOP convention, beginning first with a question about which Texas Democrat stands to gain the most from this week's proceedings.

The insiders were most bullish about San Antonio's Castro twins, with 26 percent citing Julián and 25 percent citing Joaquin. Former state Sen. Leticia Van de Putte, who had a leadership role at this year's convention, was named by 13 percent. Former U.S. Rep. Pete Gallego, who is running to reclaim his seat in a geographically sprawling swing district that spreads across West Texas, was named by 10 percent of the insiders.

We flipped things with the next question to ask who stood to lose the most from the convention. On that score, 29 percent named Julián Castro with just 3 percent naming his twin, Joaquin. Gallego was cited by 21 percent as the one with the most to lose, and Van de Putte was named by 16 percent.

Finally, we asked which veep candidate among the Republican, Democratic and Libertarian nominees most helps the ticket. On this one, 39 percent chose Tim Kaine, 32 percent chose Mike Pence and 18 percent chose Bill Weld. 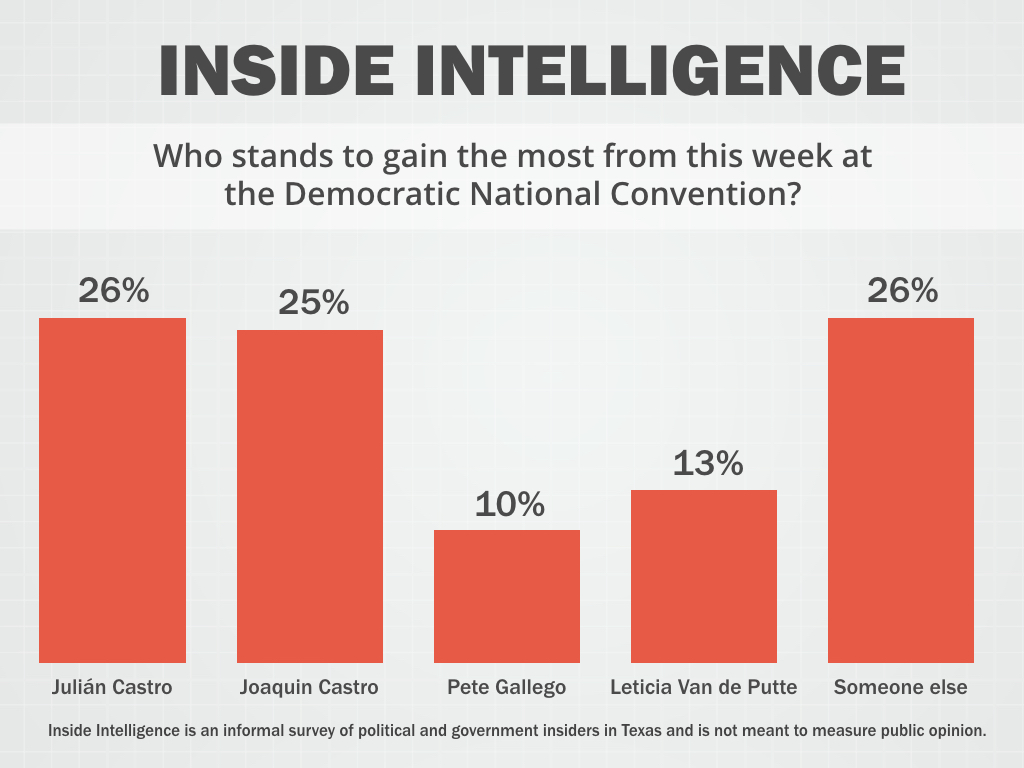 Which Texas Democrat stands to gain the most from his or her time in Philadelphia this week at the Democratic National Convention?

• "Both Castros will dominate. The only downside is that Texas Dems have put all (two) of their eggs in one basket. No deep bench."

• "VDP has been instrumental to the process and is now a 'lobbyist,' and with a Hill win — she will undoubtedly be placed well in the inner circle or outside circle of friends."

• "Seriously? Why is LVP even on this list? She's not even in office anymore, but to your point, Gallego has an election to win so if he reaches out to his core and new constituency at the convention then he's got a better chance of getting re-elected to Congress."

• "Gallego has to unearth some DCCC love to make up for getting outraised 2:1." 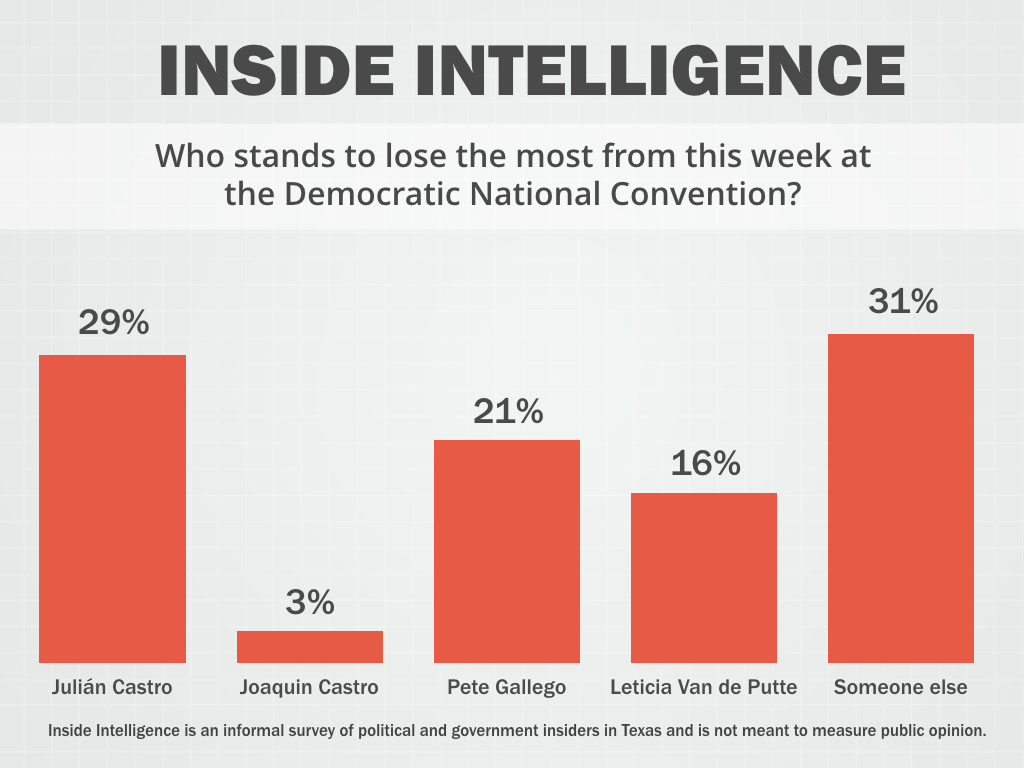 Which Texas Democrat stands to lose the most from his or her time in Philadelphia this week at the Democratic National Convention?

• "None will lose. The Ds don't have anyone with a tin ear or sense of self importance as big as Ted Cruz's."

• "LVP, her job is a thankless one and no one will remember the fine job she did at the DNC."

• "If I were Pete, I would not go near that radioactive waste dump called the Democratic National Convention. A couple of well-placed pictures of him with some of the Elizabeth Warren types are great material for Hurd and his efforts with the business community."

• "Both Castros — they have got on board a sinking left-wing ship."

• "With HRC's pick of Kaine, Democrats are no longer placing hopes on Hispanic community, but looking at white PA, VA and NC." 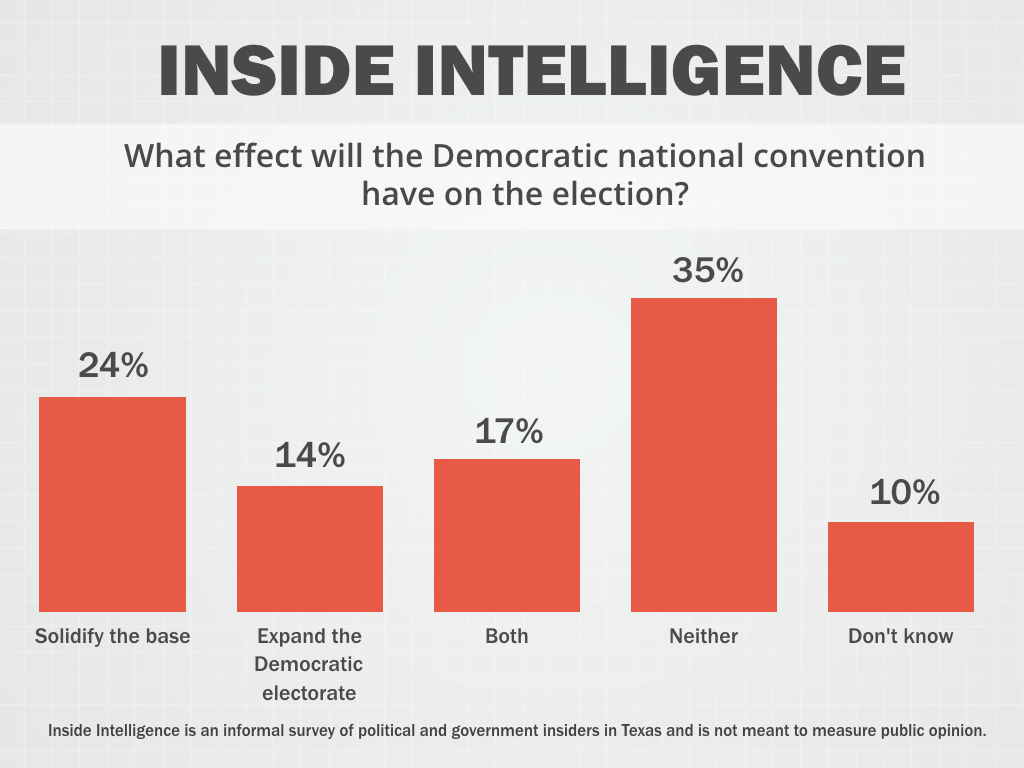 What effect will the Democratic national convention have on the election?

• "The choice for clear-minded Republicans now is Clinton or the Libertarians."

• "Inspire and solidify the base — lots of doors to be knocked on."

• "Unless the WikiLeaks spoil the party and leave Sanders supporters upset yet again."

• "The Democrats will expand the electorate, but have lost control of their base. Ditto for the Republicans."

• "Nobody cares about either convention. And with the Dem email shenanigans, fewer still will care." 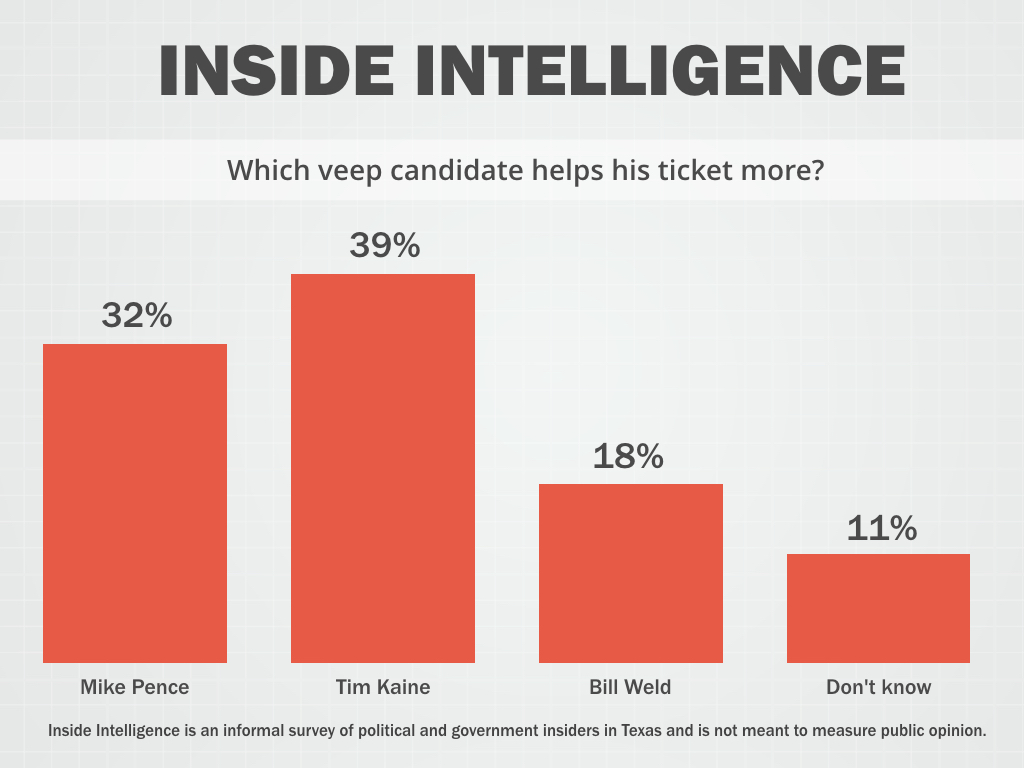 • "Weld is a 'grownup in the room.' If you see the Johnson/Weld YouTube ad, you find yourself saying, 'Hmmm, maybe I better re-think this'; whether you're a D or R. I'm sending the ad to all my R friends who say they can't vote for Trump."

• "Pence had his inner 'I could have been a contender!' moment during the 60 Minutes interview. Now nothing but a lap dog. Or a servile puppy dog as Ted would say."

• "Kaine's liberalism is not trustworthy for the die-hards. Not sure if this helps or hurts Hillary."

• "Both veep candidates are good choices, considering the weaknesses of the presidential nominees. Of the two, Pence probably helps Trump more, because Trump is so weak on experience and on conservative bona fides."

• "Clinching Virginia is pretty significant as it requires Trump to win both OH & FL to have a path to 270 EVs."