For this week’s nonscientific survey of insiders in government and politics, we asked about this week's Republican Convention taking place in Cleveland, Ohio.

We started the survey this week asking who, among a list of prominent Texas Republicans, stood to have a good week in Cleveland. On that question, a consensus was hard to find. Lt. Gov. Dan Patrick was cited by 26 percent, closely followed by former Gov. Rick Perry, who was named by 24 percent. U.S. Sen. Ted Cruz, meanwhile, wasn't far behind, favored by 21 percent of the insiders.

We flipped things with the second question, asking who stood to lose the most this week. The insiders were clearer on this one, with 36 percent saying Cruz stood to lose the most. This questionnaire closed at noon on Wednesday, hours before Cruz's controversial non-endorsement speech at the convention.

Finally, we asked where Republican nominee Donald Trump would end up competitively with Hillary Clinton upon the party conventions' conclusion. Close to half, or 47 percent, of the insiders thought Trump would come out of the convention season behind Clinton with another 42 percent thinking they would be running neck-and-neck. 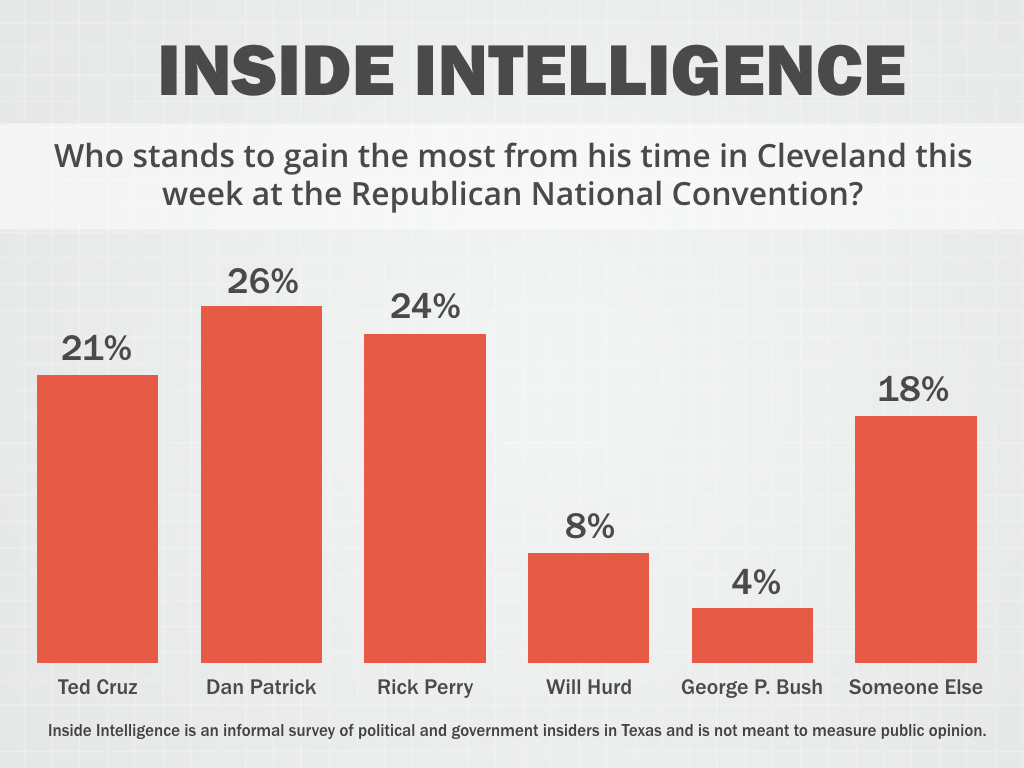 Who stands to gain the most from his time in Cleveland this week at the Republican National Convention?

• "As the presiding officer of a legislative body/chamber, Patrick is in a position to tap into the mistrust and anger of the GOP and do something about it (setting the agenda and moving bills)."

• "The only one who is going to stand out at the convention is Trump."

• "Perry is angling for a job — any job — in a Trump administration. He's dutifully saying the exact opposite about Trump that he said previously."

• "I picked Will Hurd ... who with some national exposure might just tap into some additional support in a very tough race." 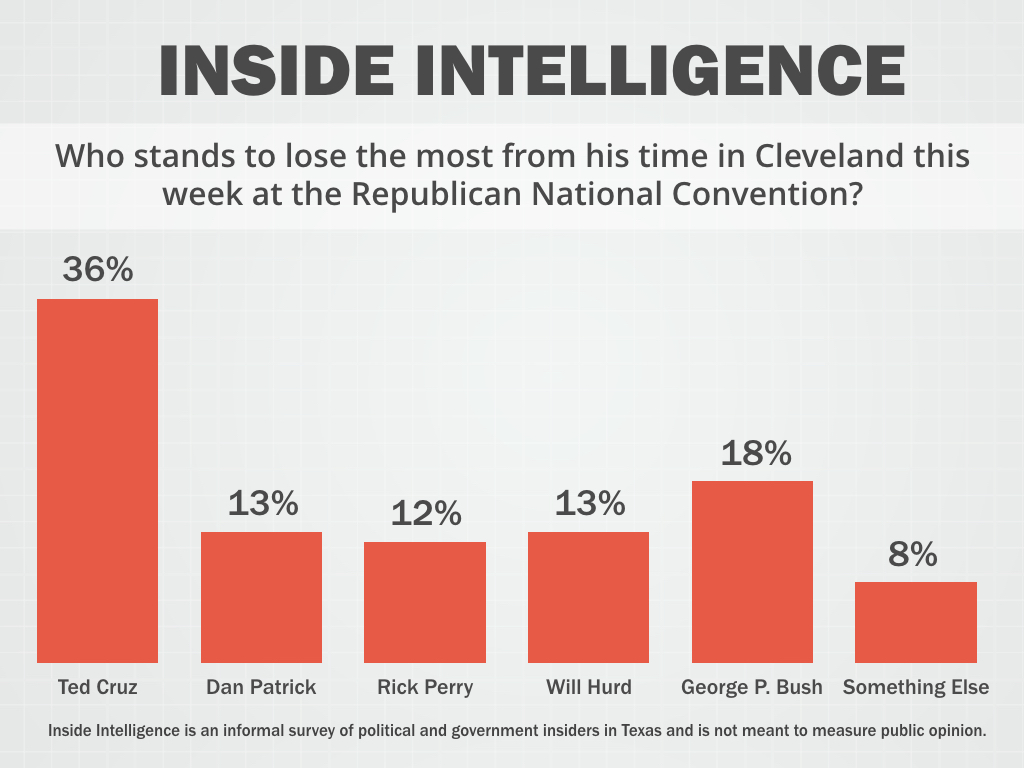 Who stands to lose the most from his time in Cleveland this week at the Republican National Convention?

• "His childish, sore loser behavior is on full display. He lost. Get over it and get on board to help defeat Hillary. Oh, and supporting Trump is the ONLY way to do that."

• "Maybe Straus due to the fact that he leads in an ultra-conservative state."

• "Depends on how Cruz handles himself. If loyal, he'll move ahead a lot. If disloyal, he'll be badly hurt. There are a dozen folks who are serving as loyal soldiers who will be fine if Trump loses. But a sore loser will go nowhere."

• "I don't know what Bush is doing there. His father is totally off the reservation, and Bush is there in some never-never land."

• "DP has the ability to provide leadership. However, he will fail." 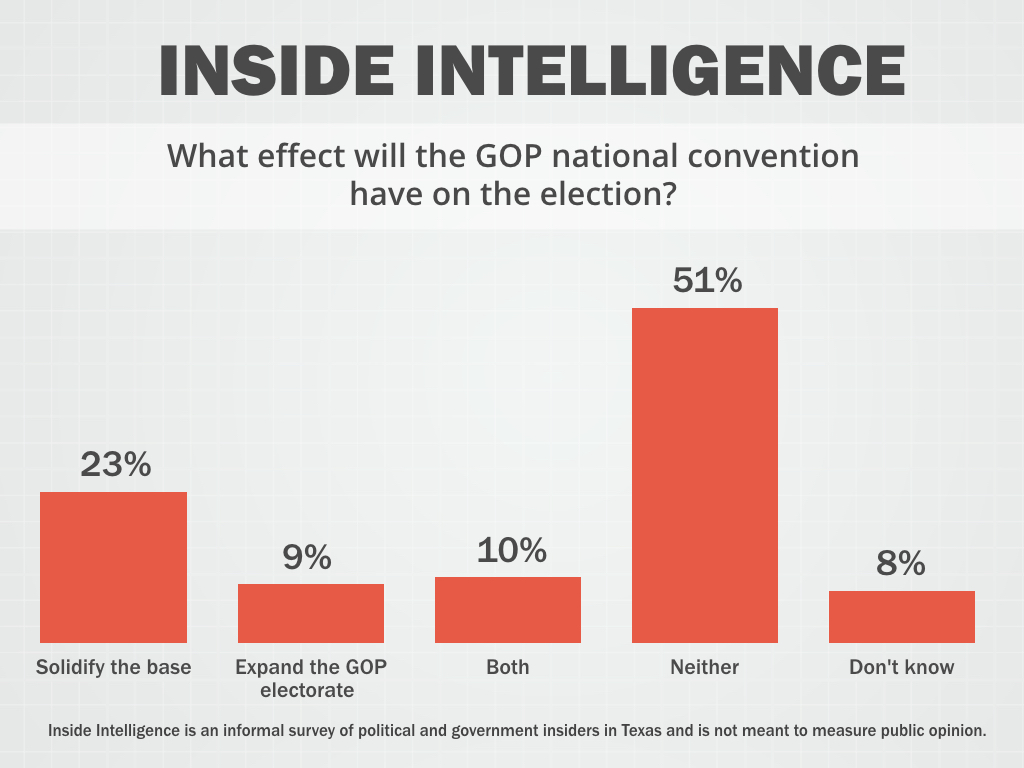 What effect will the GOP national convention have on the election?

• "The over-50, white men (along with their fellow travelers) are being herding like lemmings onto the sinking ship that will continue to rack up solid majorities in Appalachia, Alabama, Mississippi and West Texas. The rest of the country will continue that strange phenomenon called 'evolution.'"

• "It'll bring the party closer together, but it's not a rock-solid party unified against Hillary. Still, it's better than it was a month ago. Trump's rhetoric and personality turn off as many people as it attracts, so it's hard to see it expanding the GOP electorate, notwithstanding the 40 percent new/first-time GOP primary voters in March (in Texas)."

• "Solidify the Trump base and make the down-ballot folks work extra hard."

• "Still time for a miracle (this written on Monday afternoon), but with Trump denying votes to dissidents, and the campaign chairman dissing the popular Ohio governor, it's difficult to see how even a smooth show will help."

• "Who the heck knows? The Republicans have done an awesome job of snatching likely defeat from the jaws of virtually certain victory." 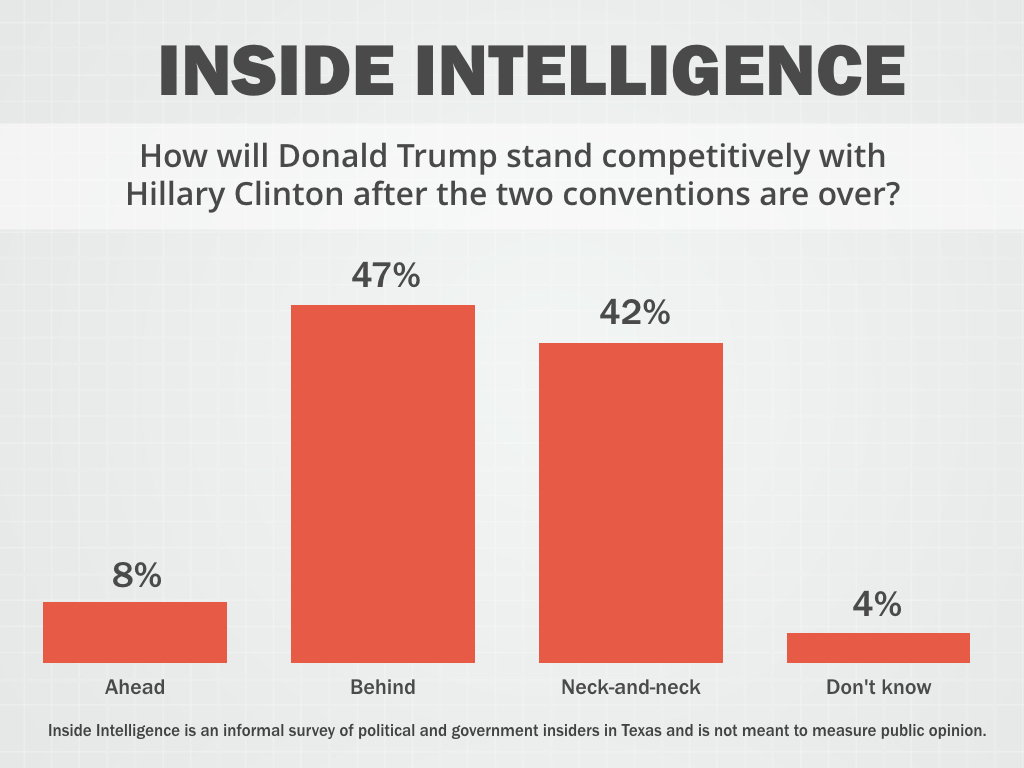 How will Donald Trump stand competitively with Hillary Clinton after the two conventions are over?

• "The country is deeply polarized. Hillary must recreate Obama's coalition. Donald Trump's narrow path can be widened through outside events. Terrorist attacks and assassins' bullets only feed his 'law and order' narrative. Think '68."

• "Seems to me that Trump could win the election before he leaves Cleveland if he delivers the right message in the right way. He won't do that, of course, but if he were calmly to deliver an upbeat message of competence, confidence and toughness, and do it without going overboard disrespecting Clinton he could walk away with the election in his pocket. Again, that ain't fixin' to happen."

• "Any Democrat but Hillary could win a 50-state blowout against Trump. To call his racist, Luddite appeal a clown car campaign would be an insult to clowns."

• "Hey it's a battle between who the voters dislike the least."

• "She is the weakest major party candidate in a couple of generations. Any of a dozen in the GOP field could have beaten her easily — but Trump is struggling."