For this week’s nonscientific survey of insiders in government and politics, we asked about the state of police and community relations in the wake of last week's attack on officers in Dallas.

We started by asking a trio of questions on the level of trust between police and the larger community in Dallas, in Texas and beyond.

The insiders were at near consensus, though, on the next question, which asked if lawmakers were rethinking their positions on gun laws in the wake of the Dallas police shootings. Fully 90 percent said lawmakers wouldn't change their position on any aspect of the state's gun laws.

State and legislative leaders, meanwhile, were named by just 15 percent of the insiders.

We collected comments along the way, and a full set of those is attached. The final two comments for the question dealing with the level of trust in Dallas were given to other questions but I've moved them since they seem to make more sense listed under the Dallas-specific question. Here’s a sampling: 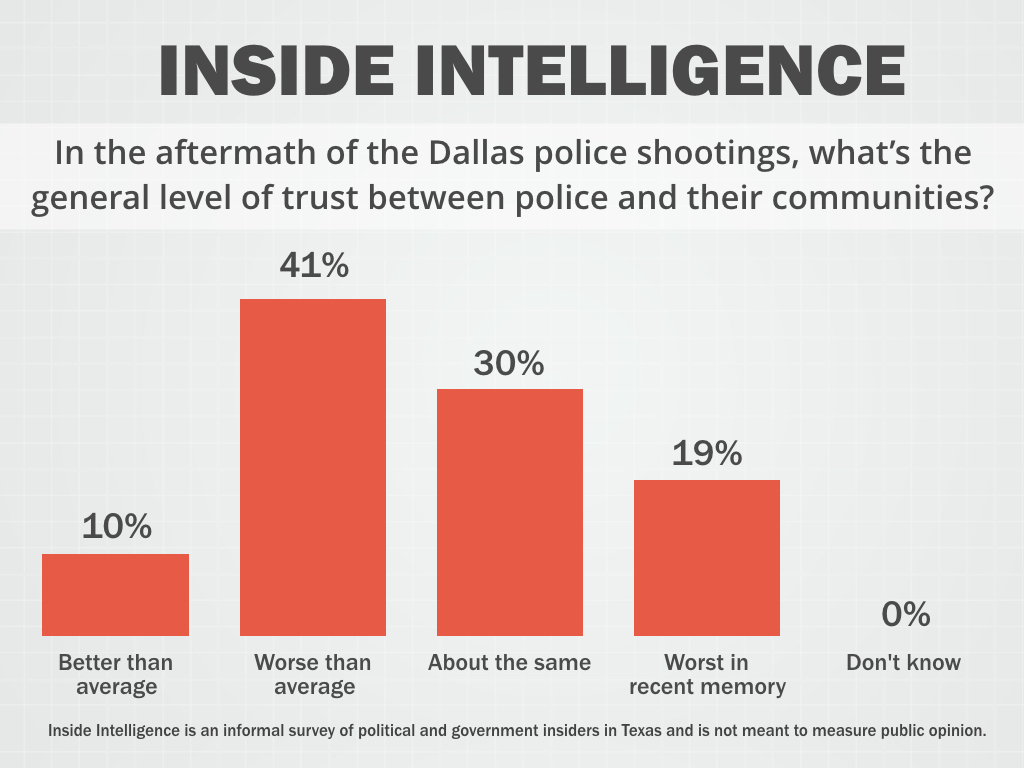 In the aftermath of the Dallas police shootings and unrest elsewhere in the country over the weekend, what’s the general level of trust between police and their communities?

• "Those who don't shoot cops, respect and support them trust them. Those who stir up trouble, promote lies and create problems don't trust them and never will. The BLM is telling flat out lies. The real truth is the black-on-black crime that is not being highlighted and focused on as it should. Can you say CHICAGO? I dare you to print that!"

• "'About the same' doesn't mean good. But maybe with enough attention focused on the issue, things could improve. Personally, I think that starts with lots better training of police."

• "Nothing generates support and sympathy like being a victim in an ambush. For the moment, law enforcement enjoys more trust than at this point last week."

• "The fear, frustration and anxiety in the black community, while at times overblown, is palpable. I fear; as I have for some time, believe we're unfortunately moving towards the summer of '68. As a country, we don't know how to and aren't comfortable talking seriously about issues around race." 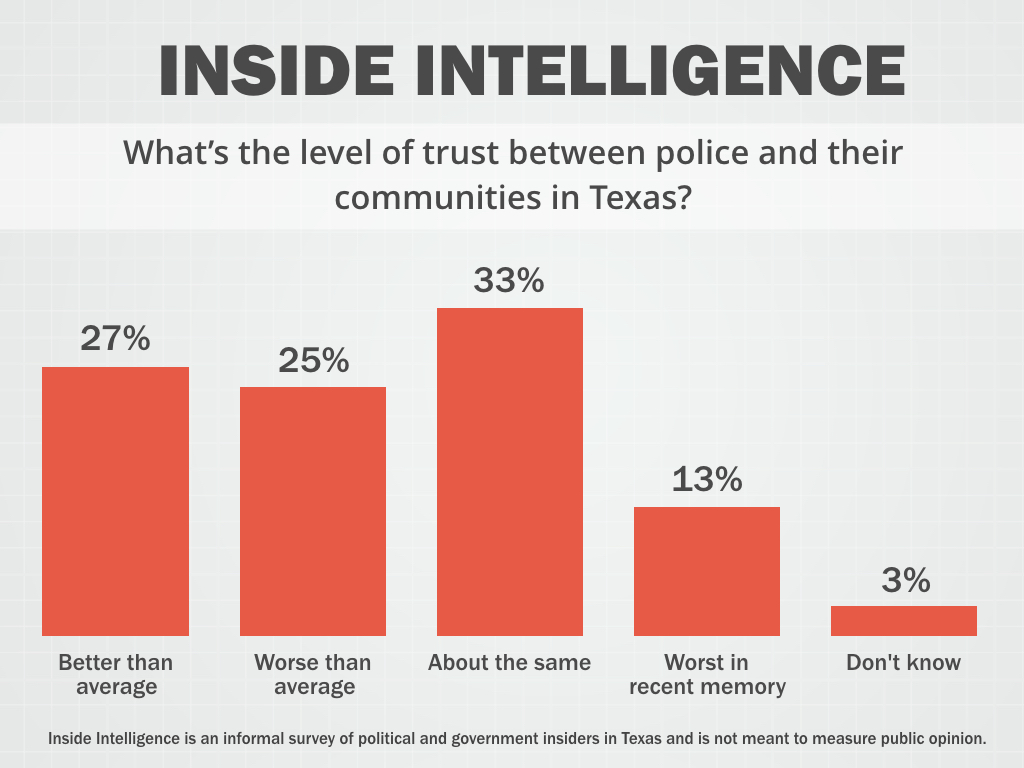 What’s the level of trust between police and their communities in Texas?

• "In communities with large African-American populations, worse since the development of Black Lives Matter movement."

• "Cops have been so hamstrung from doing their job I would be anxious if I were them, too. Let them take out threats! And, please, the lies of BLM are getting so old. The facts, the FACTS shut down their lies. They want to perpetuate a myth."

• "City Council funding has a lot to do with this. In Austin, the Council has cut the police budget year after year, sending a multi-pronged message to the community: 1. That police aren't important and that there is a ton of fat in the budget requests. 2. That Austin is so 'safe' (not borne out by the property crime numbers) that we don't need to waste money on police. 3. That the chief is not to be trusted. If the Council would knock this off and support APD appropriately, it would go a long way toward helping everything calm down."

• "Better than average until the empathy generated on Dallas wears off or until some other incident moves it in either direction." 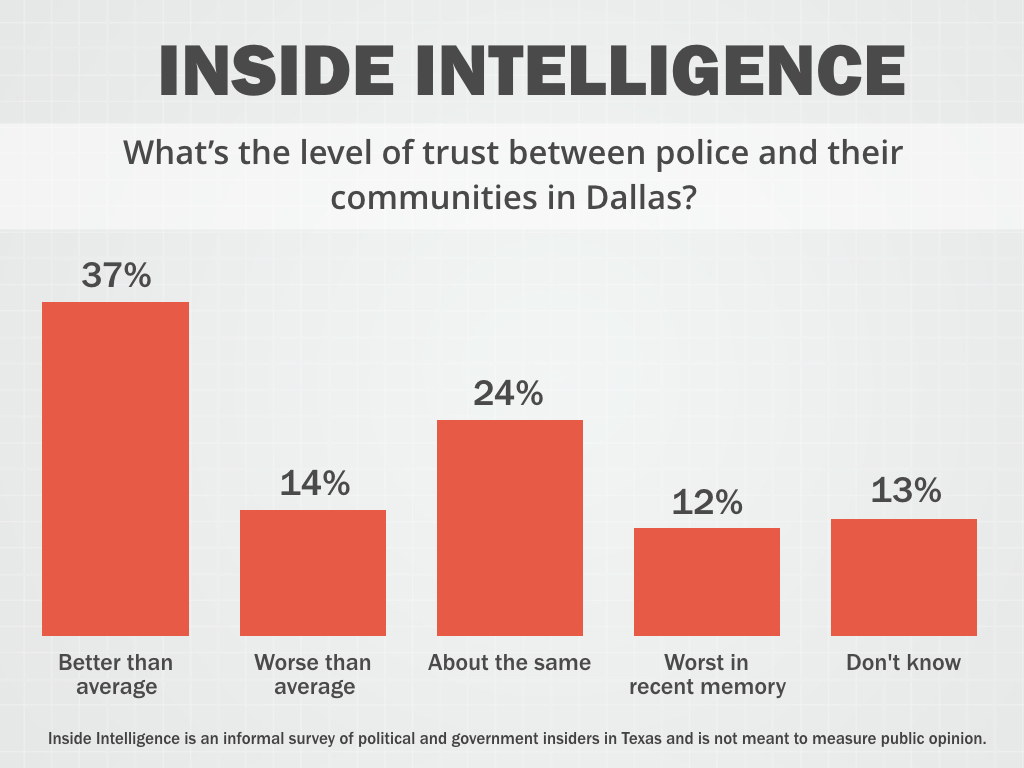 What’s the level of trust between police and their communities in Dallas?

• "It may be better in Dallas thanks to the exceptional leadership of the chief and mayor." 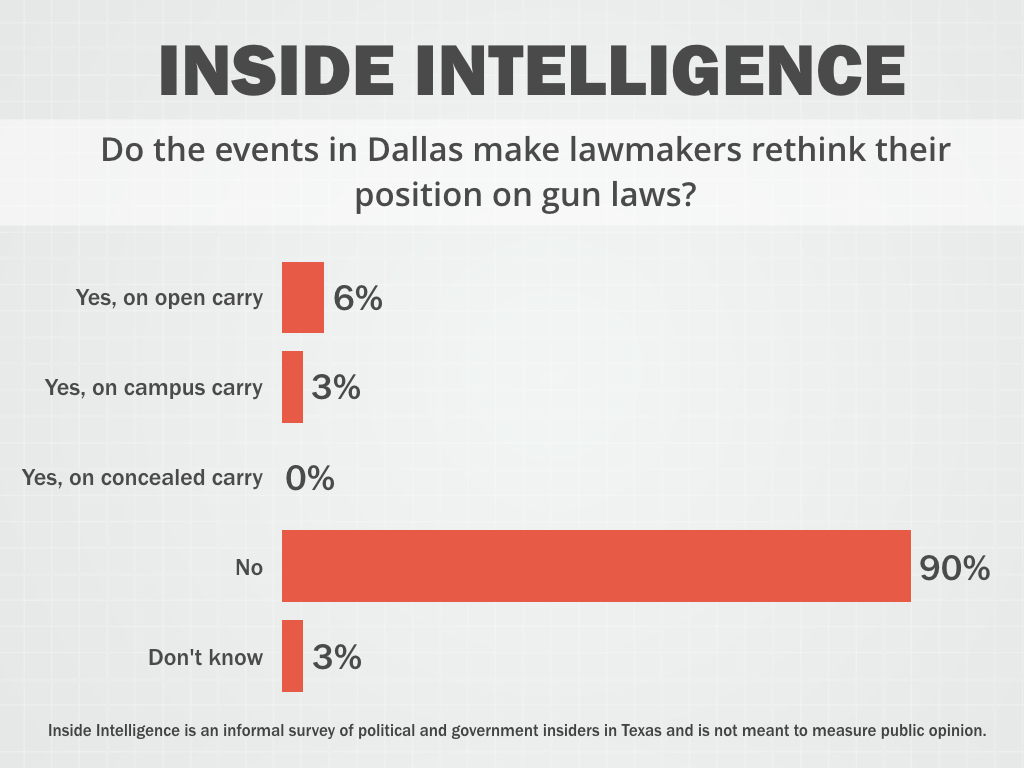 Do the events in Dallas make lawmakers rethink their position on gun laws?

• "Legislators have ignored the concerns of law enforcement on gun laws and this might give cause for some to think on the issue for a day or so, but it will not result in action because polls mean more than lives."

• "Why rethink it. If I am armed, I am going to put that threat down. If more of us are armed, more of us can protect ourselves and put down threats. This is BS messaging being promoted by the left. Why let a crisis go to waste, right?"

• "Municipal government lawmakers will evaluate their position because they are the lawmakers that have to deal with the immediate consequences of our laws. State and federal lawmakers have partisan primaries and therefore re-election weighs higher in their decision making."

• "Ain't enough votes to change those laws one way or another. But, folks ought to be paying more attention to Sen. West's concerns, as last week confirms minorities are likely to get gunned down or thrown violently to the ground for having the temerity of abiding by the CHL laws or carrying long guns in public."

• "No one is rethinking their position. The Democrats are still trying to disarm the citizenry. Republicans are still committed to protecting the Second Amendment. No one has changed their mind." 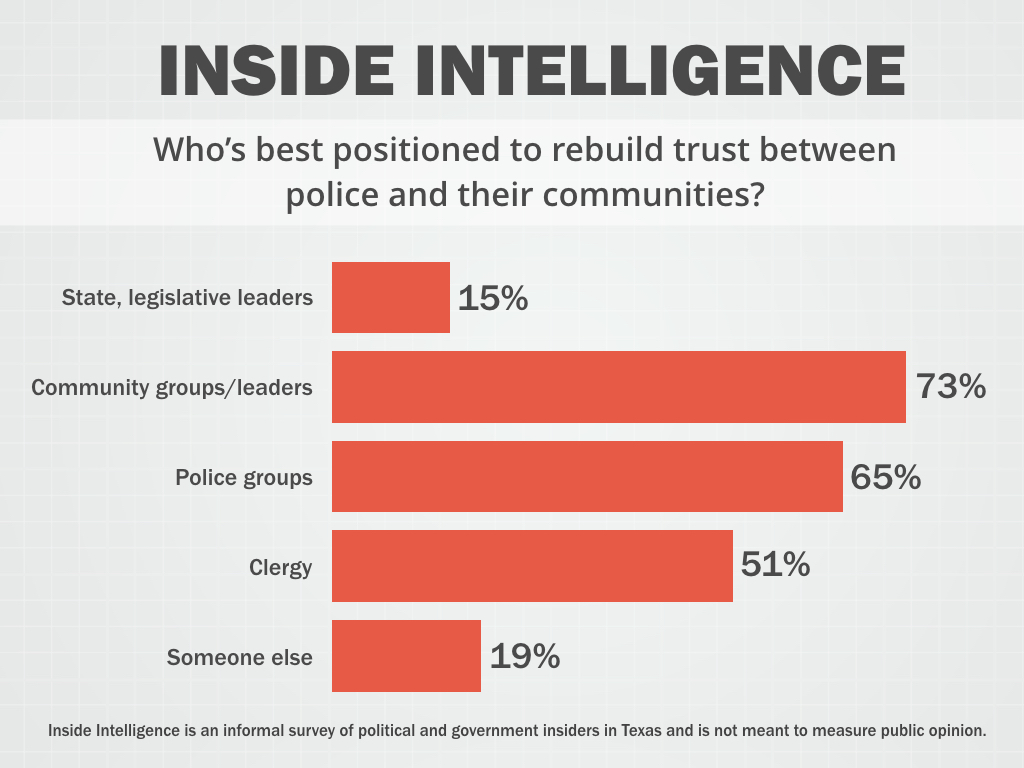 Who’s best positioned to rebuild trust between police and their communities?

• "The media is in the best position to do so if they could forgo sensationalism and a false narrative of racist cops for facts — facts which show that there is no better time in all of this country's history for a law abiding individual of any race, including African American, to have an encounter with a police officer and come out of that encounter in a satisfactory fashion."

• "Everyone who gets their name in the paper should be talking about this. Those who don't should be ashamed."

• "It would go a long way if police officers publicly condemned the actions of other police officers when their actions are indefensible. Community leaders need to be at the center of trying to unite and find common ground with the police departments."

• "This is a most complicated question. Fair play. Logical laws. Funding for the needs of society. Leaders that lead rather use each incident for political purposes. Chief Brown said it best, too much is asked of our nation's police forces."