For this week’s nonscientific survey of insiders in government and politics, we asked about predictions on turnout in Texas for the presidential election.

Ahead of this month's national party conventions, we thought the time was right to quiz the insiders on what the anticipated Donald Trump vs. Hillary Clinton presidential matchup would do for turnout in Texas.

Four years ago, almost 8 million Texans showed up to vote in the presidential contest between Barack Obama and Mitt Romney.

We then turned to a couple of questions aimed at ascertaining how this year's party standard bearers would perform.

Three in five of the insiders, meanwhile, believed presumptive Democratic nominee Hillary Clinton would take between 40 and 44 percent of the vote, a total that would put her more or less on par with the 41.4 percent won by Obama in 2012. One in four thought she would surpass 44 percent of the vote in Texas while 14 percent thought that she would not break 40 percent.

We closed by asking whether Gary Johnson would perform better in Texas as the Libertarian Party standard bearer than he did four years ago when he won just 1.1 percent of the vote. On this one, the insiders were in agreement with three in four of them thinking Johnson would improve upon his 2012 performance. 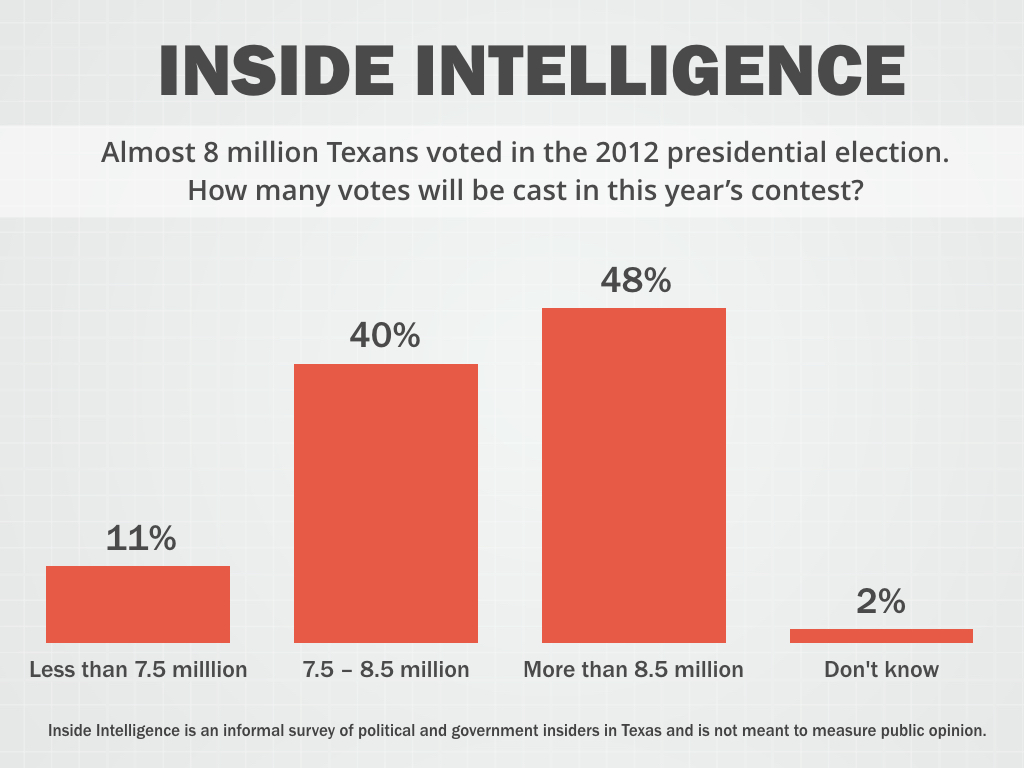 Almost 8 million Texans voted in the 2012 presidential election. How many votes will be cast in this year's contest?

• "The sleeping giant will finally awaken."

• "Seems like 8 million people have moved to Texas since 2012. Surely they brought with them civic-mindedness and will help increase turnout."

• "The state has grown, so there will be more votes."

• "The Rs aren't excited, blacks and Hispanics still don't vote in high enough numbers and the D base isn't enough to run up the total very much." 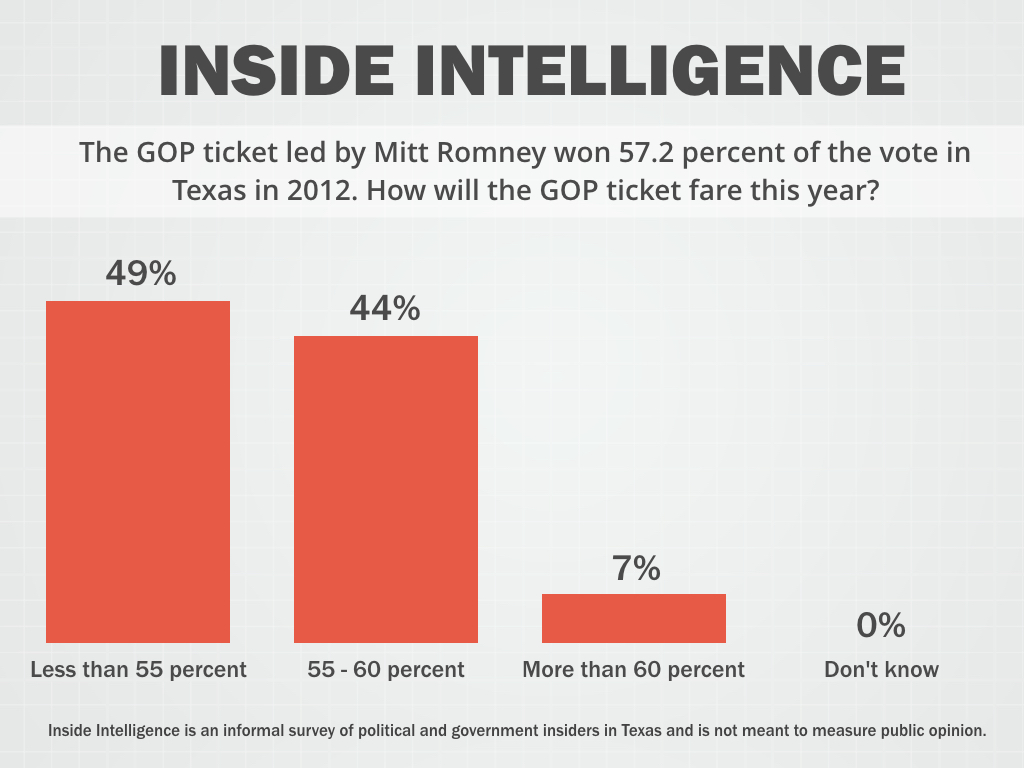 The GOP ticket led by Mitt Romney won 57.2 percent of the vote in Texas in 2012. How will the GOP ticket fare this year?

• "Clinton won't connect with male voters, both Hispanic and Anglo."

• "Whatever the percentage is, you can take to the bank that it will be The Best (TM) percentage."

• "Trump is a fool. I think a lot of GOP votes will go Libertarian."

• "There are still enough over 50, white men to trounce the Ds in Texas." 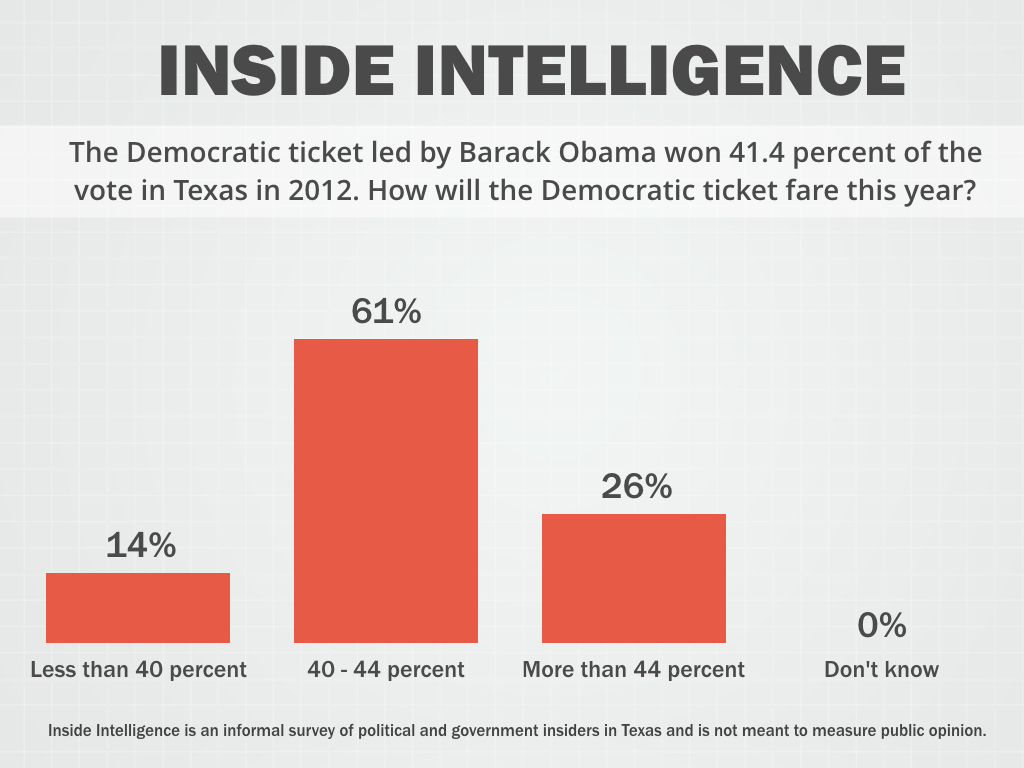 • "Clinton won't be able to surf the Obama youth vote."

• "Much more than any recent year."

• "Low- to mid-forties sounds about right. I don't sense there will be many folks going from R to D, but could see a lot of Rs not voting or going to Libertarian."

• "Hillary has a loyal, though small, following in Texas. And, she doesn't suffer from racial bias like Obama did."

• "HC is no Barack. Many still want to feel the Bern!" 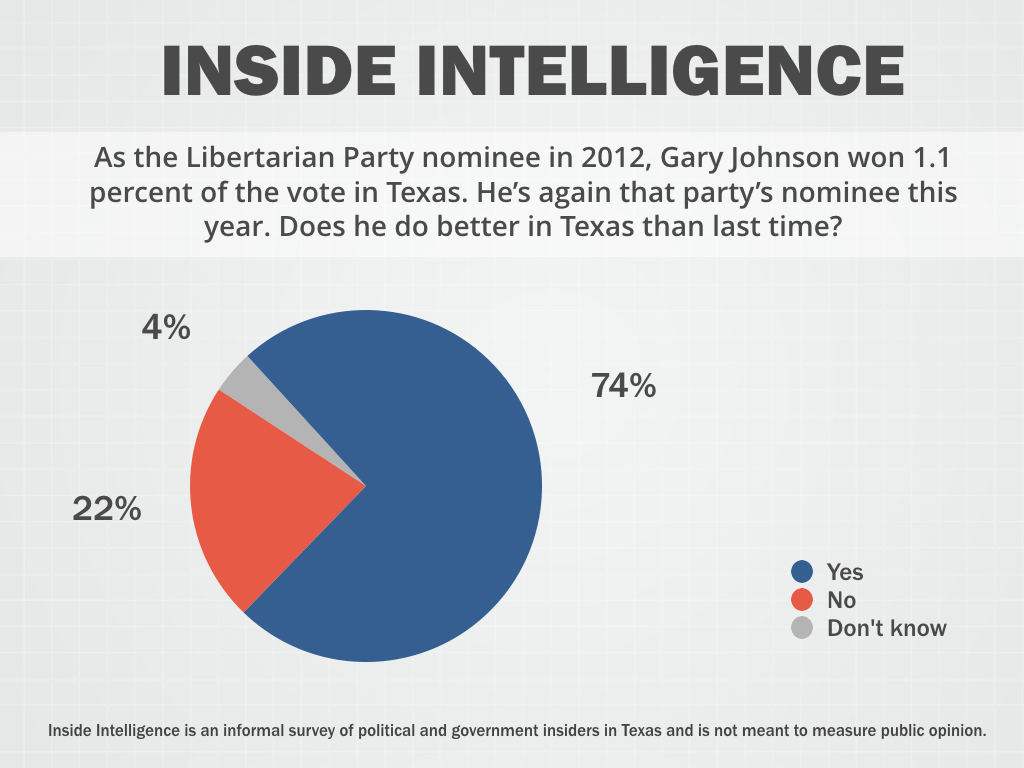 As the Libertarian Party nominee in 2012, Gary Johnson won 1.1 percent of the vote in Texas. He's again that party's nominee this year. Does he do better in Texas than last time?

• "Hillary wins big among Hispanics, but the Spicoli (thanks, Sean Penn) vote goes to Governor Veto."

• "It does not matter. The Libertarian Party is a waste of effort."

• "Johnson and Weld offer a (mostly) common sense alternative to Rs who can't imagine voting for Trump or Clinton. That should equal 5 percent for the Ls in Texas."