For this week’s nonscientific survey of insiders in government and politics, we asked about those post-"Brexit" vote woes and what's next after the Supreme Court's abortion ruling.

This week was eventful on the news front so we decided to split our questions in order to ask about the implications to Texas of a major international event (the "Brexit" vote late last week) and a major national event (the U.S. Supreme Court knocking down two key components of Texas' 2013 abortion law early this week).

The immediate aftermath of the vote by the British to leave the European Union roiled world markets with both stocks and commodity prices taking a hit. We started the survey this week by asking where the Texas economy might most feel the impact.

About one in five said that Texans' personal investments and savings would most be affected with another 15 percent citing an impact on oil and energy prices and 14 percent citing the impact on Texas exports. Just 2 percent singled out the tech sector.

Another 21 percent said "all of the above" while 17 percent said none of those areas would be impacted by the Brexit.

After the votes were tabulated, analysts also pointed to similarities between the pro-Brexit campaign and Donald Trump's campaign to secure the GOP nomination for president. We asked whether the Brexit vote foreshadows the results of the November presidential election.

The insiders were mostly in agreement on this one, with 70 percent saying Brexit doesn't point to a Trump victory in the fall.

We then turned to the impact of the Court's abortion ruling. On this one, 90 percent of the insiders believed that GOP lawmakers would work to reinstate in some fashion the regulations on abortion facilities that were struck down this week.

Fully two-thirds of the insiders thought lawmakers would attempt to reinstate in some form both of those regulations.

Finally, we asked which party's voting base came away from this week's ruling more motivated. Fifty-seven percent of the insiders said GOP voters would be motivated to a greater degree while just 18 percent gave the nod to the Democrats. Another 23 percent said it was too early to tell. 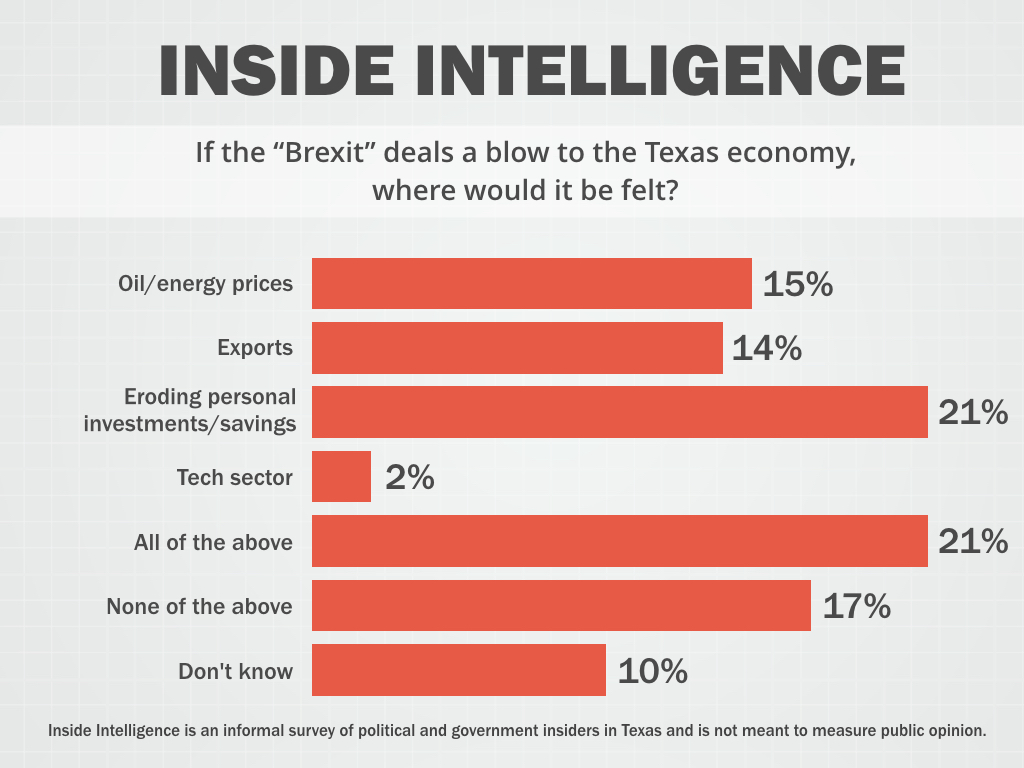 If the “Brexit” deals a blow to the Texas economy, where would it be felt?

• "Seems like the emotional, knee-jerk reaction in the markets is starting to recover, so the short-term 'blow' is much ado about nothing. I'm more concerned about the price of WTI and its effect on the Texas economy than the EU getting its panties in a bunch."

• "It will have a positive impact on Texas. The EU is going to fall apart and that will make a stable pro-business Texas the place to do business!"

• "Oil is still the big thing, but Brexit should have no lasting effect on oil. It's a global market that responds to supply and demand, and Britain's status in the EU is just not a major factor in those forces."

• "'Uncertainty' is never a good thing in the markets or the economy. Brexit has definitely created that dynamic in a very intertwined world."

• "It won't hurt Texas very much. Business will shift to Ireland, the other (and soon to be only) English speaking member of the EU." 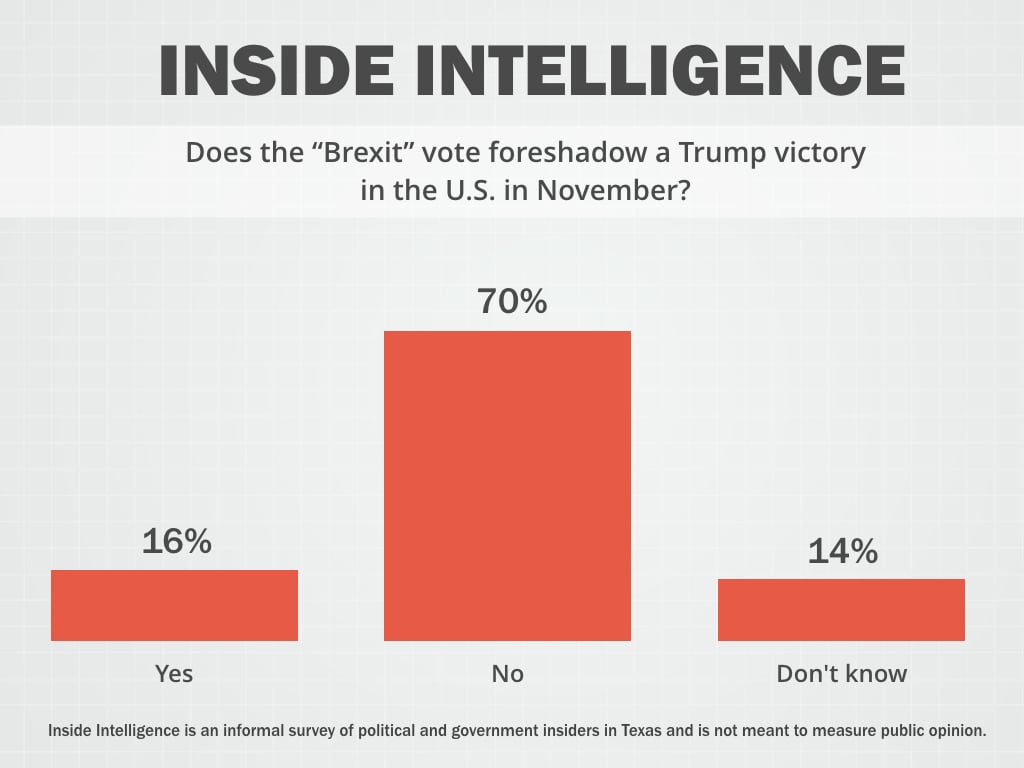 Does the “Brexit” vote foreshadow a Trump victory in the U.S. in November?

• "While there are parallels of a strong discontent with political elites, Trump seems incapable of capitalizing on this. His greatest opponent in this race is his own mouth."

• "Brexit means that Brits are worried about immigration, as are the Trumpists, but the problem that the Trumpists have is — Trump. He can't win a general election."

• "I still doubt Trump can win, but the Brexit campaign was totally parallel to ours: emotional appeal vs. bloodless policy."

• "It's a great talking point, and one the media has seized upon. But so far evidence has shown that Trump has just turned out GOP general election voters, not any actual 'new' voters. Unless/until he's changing the actual math for November turnout, then there will be no Trump victory to foreshadow." 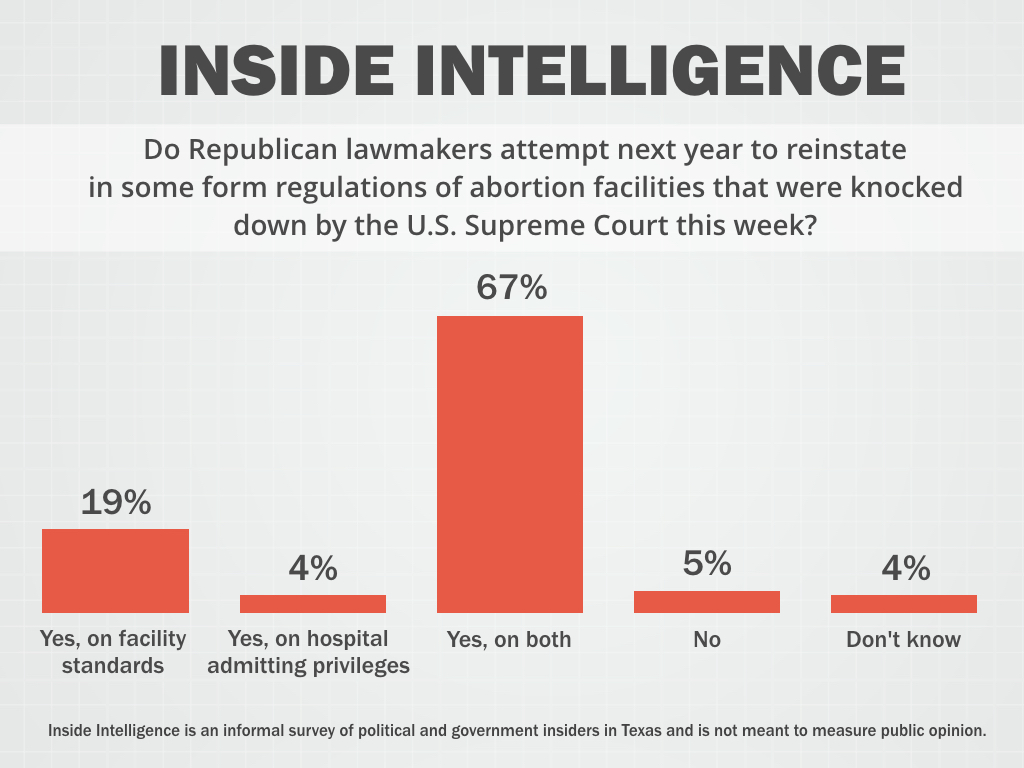 Do Republican lawmakers attempt next year to reinstate in some form regulations of abortion facilities that were knocked down by the U.S. Supreme Court this week?

• "I don't think anyone knows what they're going to try to do about the A word, but whatever it is will soak up a lot of wind in the Capitol. And that's fine with me."

• "Of course they will, they have to. But I'm not sure where it falls on the list of social issues the GOP wants. More than transgender bathrooms? More than sanctuary cities, Part 4? More than other abortion-related measures that they may want to start in on?"

• "Another answer is 'yes, on neither.' They'll just come up with other stupid TRAP laws." 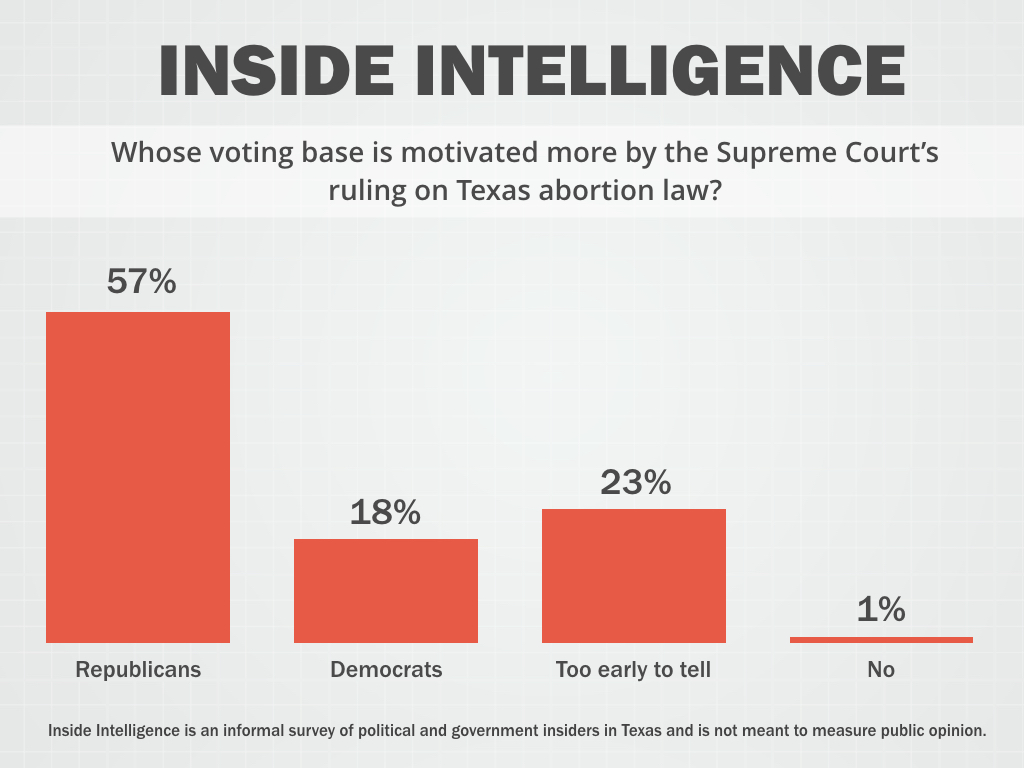 Whose voting base is motivated more by the Supreme Court’s ruling on Texas’ abortion law?

• "Historically, pro-choice folks accept the victory and sigh with relief. They take their marbles and go home while the pro-lifers are inspired by strong, passionate religious beliefs and will never let the fight die."

• "In Texas, it will help Trump as this is one more concrete example of why the Supreme Court appointments are so important. Now, conservatives have to trust will make strong appointments. But hey, his appointments won't be worse than Hillary's so what do we have to lose by going all in for Trump?"

• "Now swing-state social conservative Independents have an excuse to hold their nose and vote for Trump."

• "Wins are scarce for Texas Democrats. Any reason for hope is helpful."

• "If it were Cruz instead of Trump, it'd be an issue because he's got a clear record on abortion. Trump doesn't, so he can't capitalize."