For this week’s nonscientific survey of insiders in government and politics, we asked about possible economic headwinds, legislative priorities with the budget and the boundaries of local control.

We kicked off this week's survey with a question keyed off of last Friday's job report, which revealed that the state economy added a total of just 200 non-farm jobs in the month of May. Two-thirds of the insiders said that figure signals larger concerns with the overall health of the state economy.

With the second question, we asked about where lawmakers' budget priorities might be next year now that two major suits on school finance and sales tax exemptions on oil exploration equipment were decided in favor of the state. A third of the insiders thought lawmakers would focus on social issues with 20 percent each saying lawmakers would focus on regulatory issues or on tax cuts/economic incentives. Another 12 percent thought the focus would be on future investments in children and the labor force.

With the final two questions, we focused on the brewing pushback by some lawmakers against municipalities like Austin, which are attempting to regulate aspects of the sharing economy, such as ride-hailing or short-term rental outfits. Close to half of the insiders thought it was likely that lawmakers would create a statewide regulatory framework for the sharing economy. 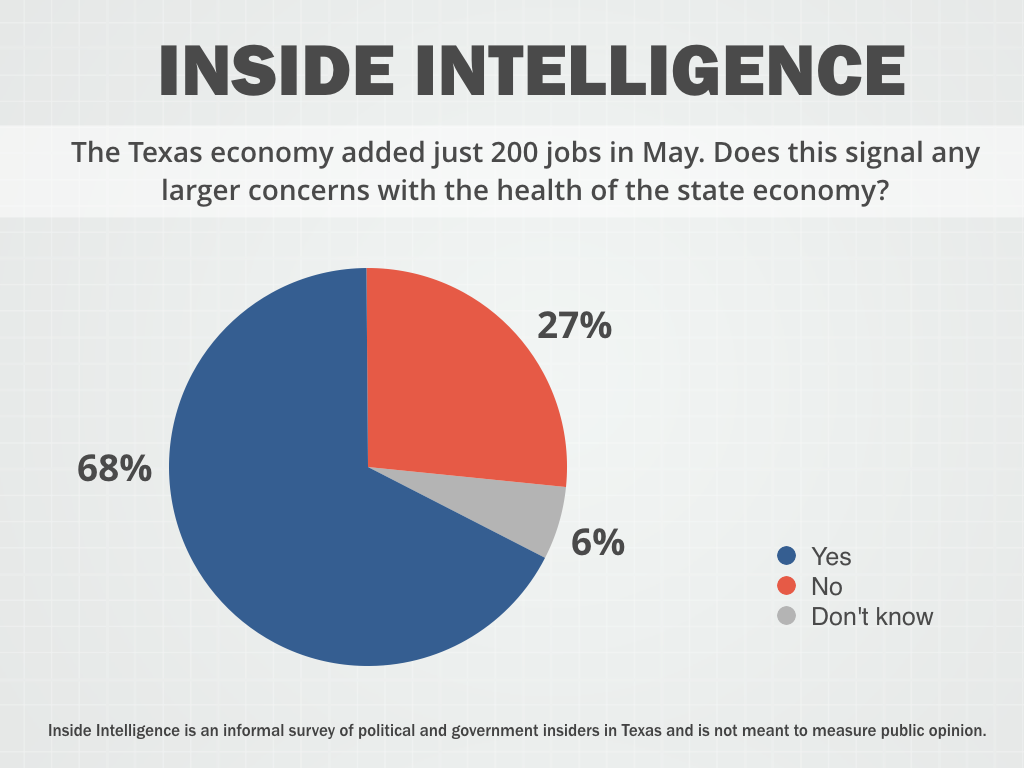 The Texas economy added just 200 jobs in May. Does this signal any larger concerns with the health of the state economy?

• "Of course. The oil business is down, but it's going to recover eventually. Tax revenues are going to be down, too. It will be a tough session in 2017."

• "Things are worse than government agencies (federal and state) are acknowledging. Look for a fuller story to unfold after the elections and before the session."

• "Oil is lagging behind projections. Sales taxes are down. Commercial real estate is in crisis. Get ready, people."

• "Population growth (from a high birth rate) will continue creating lots of low-paying service jobs with few or no benefits. Communities that actually have manufacturing or oil/energy sector jobs will have fewer people employed in higher-paying occupations."

• "The economy is in the tank. The economy sucks. But wait, maybe we won't have all of those lefties from California and other states moving here! See, dad taught me to make lemonade out of the lemon." 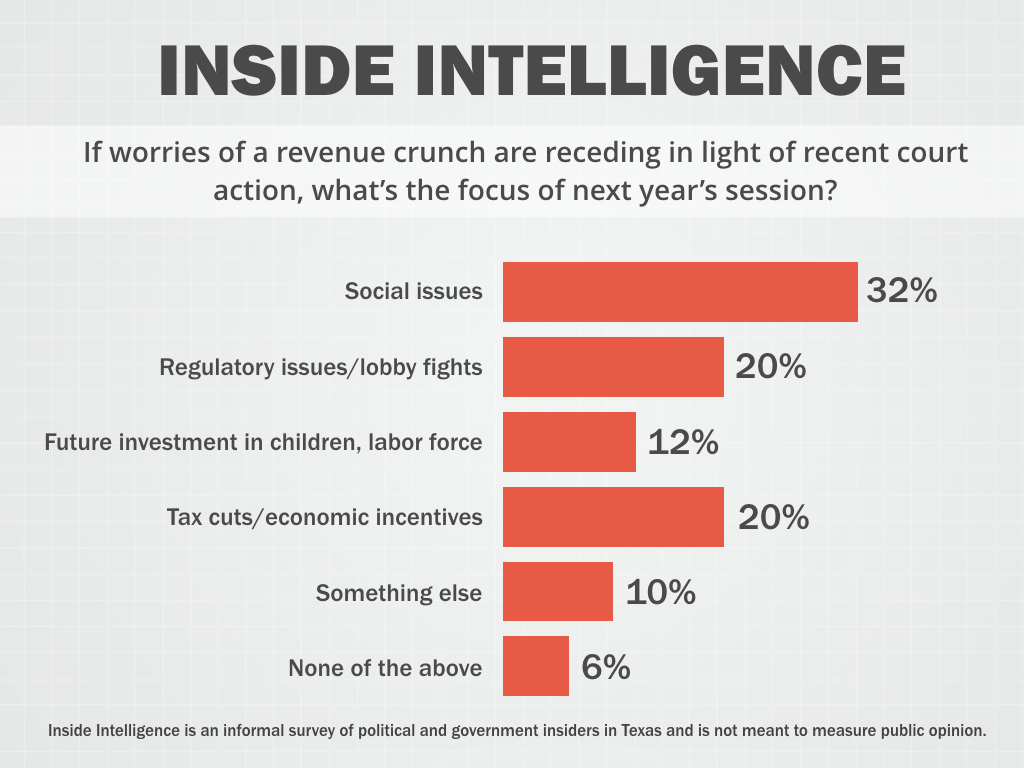 Texas lawmakers have received a few gifts from the Supreme Court in recent rulings on school finance and a tax case involving the oil and gas industry. If worries of a revenue crunch are receding, what’s the focus of next year’s session?

• "I think it will all hinge on who wins the presidency."

• "I checked 'tax cuts' ... which will hopefully be balanced with an adult discussion regarding investment in the future of the state."

• "Which bathroom does Uber use?"

• "There will still be focus on budget as Legislature has to contend with impact of the actions taken last session to end diversions and some high cost items like foster care, mixed in with the social agenda and property tax issues some members are pushing." 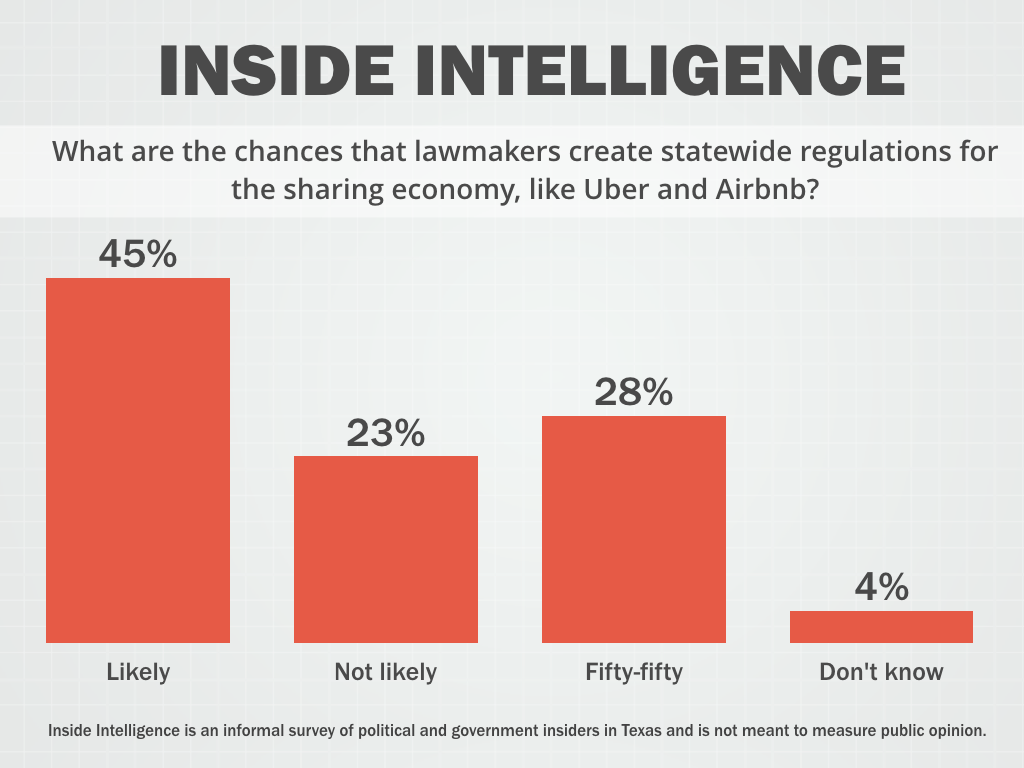 What are the chances that lawmakers create statewide regulations for the sharing economy, like Uber and Airbnb?

• "Unless Uber & Lyft shoot themselves in the foot again..."

• "The city of Austin always seems to find a way to screw TML... without even trying."

• "Uber may have an easier time than Airbnb because the hotel lobby is stronger than the taxi lobby. If we have to be in Austin, we have to have Uber."

• "Uber and the sharing economy leaders better realize government and politicians are going to crawl up their rear end and regulate and tax them. YES, even in Texas."

• "Screw local control. Republicans need to amend their platform to take that part out." 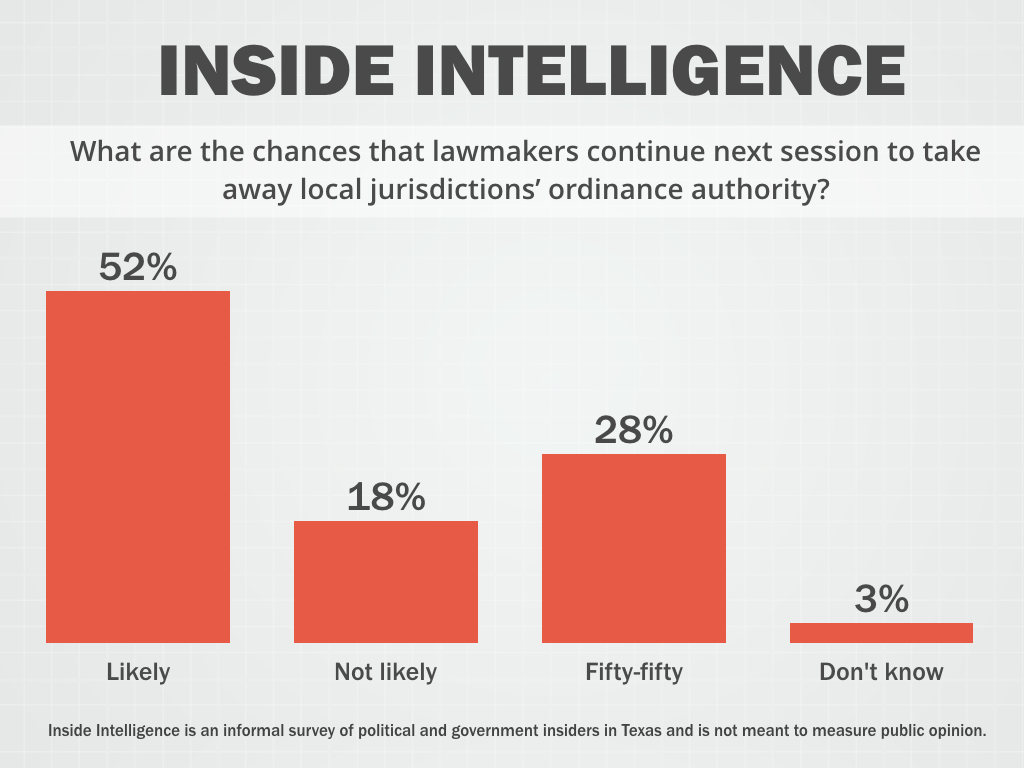 What are the chances that lawmakers continue next session to take away local jurisdictions’ ordinance authority?

• "HB 40 was a heavy lift, that's going to make it even tougher for other industries."

• "Cities throughout the state have taken a liberal approach to further regulating all industries. The state cannot continue to allow the small dogs to do the state's job. It'll be a busy session for TML and muni lobbyists."

• "It really depends on the extent to which local governments leaders continue to lie awake nights dreaming up ways to convert any business enterprise into a government revenue stream."

• "Local authorities have been using ordinances in an attempt to circumvent state constitutional guarantees. In this environment, cities, a creation of state government, should probably forego that activity less they find themselves with even less authority"

• "They will find a way to do it without doing it."