For this week’s nonscientific survey of insiders in government and politics, we asked about that upcoming convention for Texas Democrats in San Antonio.

A little more than a month after Texas Republicans met in Dallas, Democrats are prepping for this weekend's gathering, which will prominently feature native sons Julián and Joaquin Castro.

The general election, meanwhile, is some 20-odd weeks away. A polarizing presidential election is on tap, which raises the question about what this all means for Texas, which hasn't seen meaningful two-party competition at the top of the ticket in more than 20 years.

The insiders predicted more of the same for Texas Democrats, with nearly three in five predicting the Democrats will remain stuck in neutral for the general election. Another 31 percent predicted that Democrats would flip a few seats in the Texas House while 10 percent had them losing further ground to the Republicans.

We followed by asking which voters Democrats should be targeting right now. The insiders were in broad agreement on this one with 71 percent saying Democrats should reach out to moderates and independents over Democrats (17 percent) and liberal Republicans (8 percent). 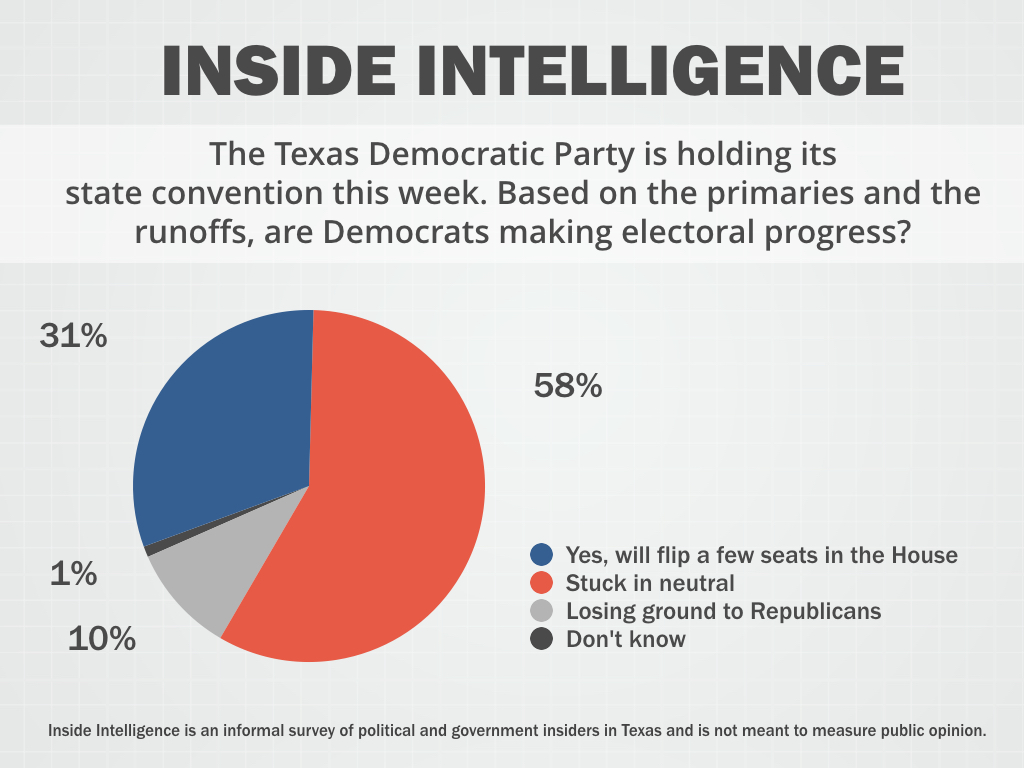 The Texas Democratic Party is holding its state convention this week. Based on the primaries and the runoffs, are Democrats making electoral progress?

• "They will flip a few seats because of Trump. But I'm not sure I'd call that progress, because it's not their doing — it's his."

• "They've been stuck in neutral the last 3 cycles. And, really, actually losing ground since they are losing seats at the local level. 80-plus Texas counties with no Democrats on the ballot — that's not good. Although with Trump on the ballot, they could get lucky and knock off some Republicans who are in tighter ORVS districts."

• "It has nothing to do with the Democratic Party, and more to do with changing demographics in 'limited' Districts. If the Party was actually '... making electoral progress...,' the question wouldn't be limited to flipping 'a few seats.'"

• "They are considering anti-oil and gas language in platform driven by liberal elites while Hispanics are laid off, what? I remember a Democratic Party that fought for jobs." 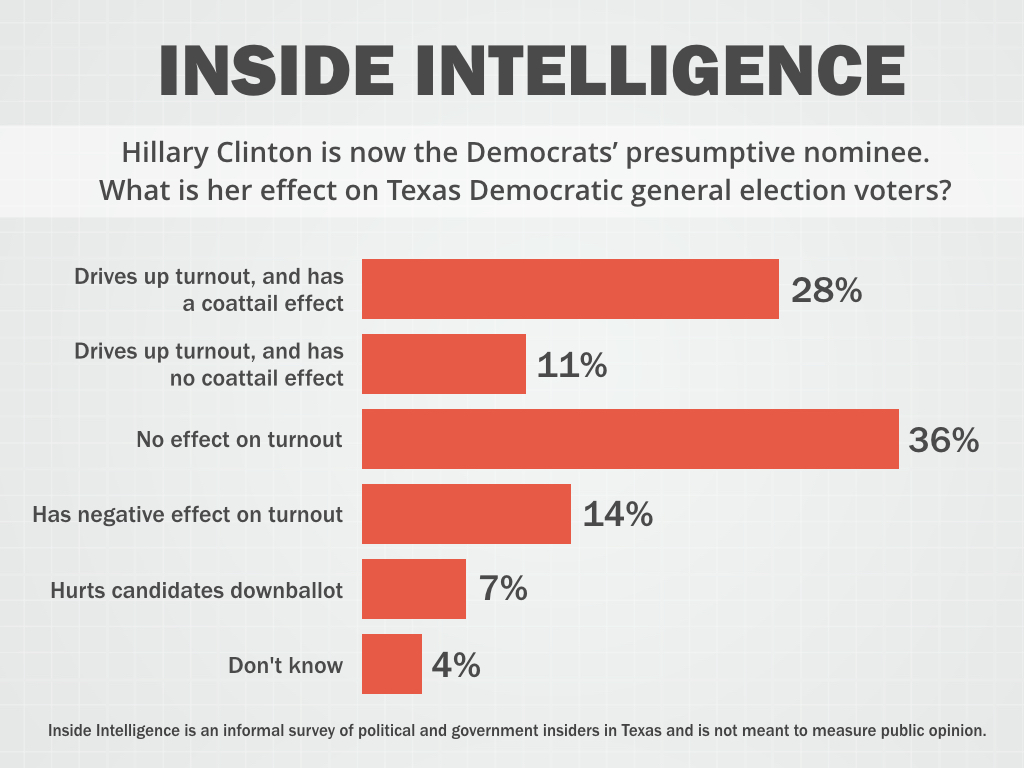 Hillary Clinton is now the Democrats’ presumptive nominee. What is her effect on Texas Democratic general election voters?

• "She is assuming she gets the Bill Clinton supporters of the past. Many of them hate her. They still love him but cannot stand her. Bubba connects with voters; she uses them and that is how they see her."

• "I still see more Bernie bumper stickers than Hillary stickers around town... are those people fired up to vote for her come November?"

• "I would hope she would have a coattail effect, but that will probably only happen in the metropolitan areas."

• "Hillary is a drag on the ticket in Texas. The Democrats' only hope is that Trump can ignite the passion of the left in a way that Hillary never will."

• "Pete Gallego can start drafting his 'thank you' note to President-elect Clinton." 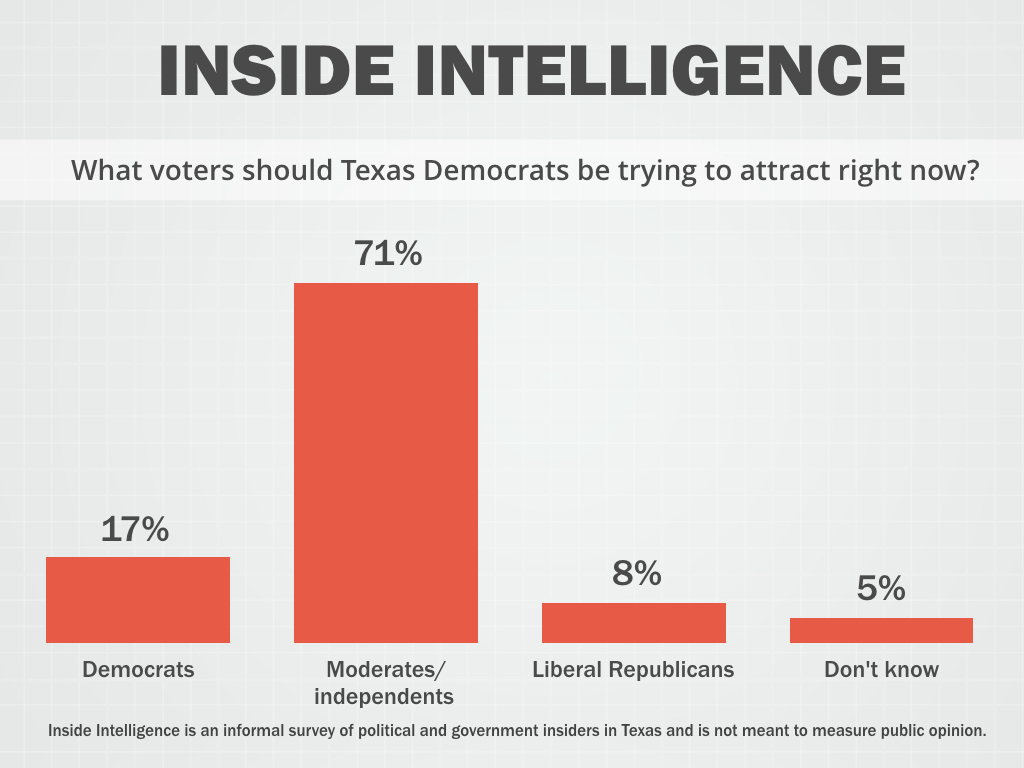 What voters should Texas Democrats be trying to attract right now?

• "Trump appeals to many working class; Democrats and Clinton does not. She appears, and is, aloof, elite and corrupted in their eyes. They vote Trump. The Dems need to shore up their own base. Are you kidding, try to attract Republicans and moderates/independents? Ha!"

• "As the Rs shift to a 'tea party' mentality, they are leaving the business community behind. This is the perfect time for the Ds to embrace the chamber of commerce types, and if they do, it could be a generational shift."

• "Independents are sick of the GOP social hoopla. But Hillary is getting pulled hard to the left by the Elizabeth Warren wing of the party. If Texas Ds were smart, they would steal the 'small government' mantra from the Rs and own that message."

• "They need to build a conservative Democrat bench."

• "If they don't stop losing straight ticket voting, which is over half the vote, they will never elect anyone statewide again." 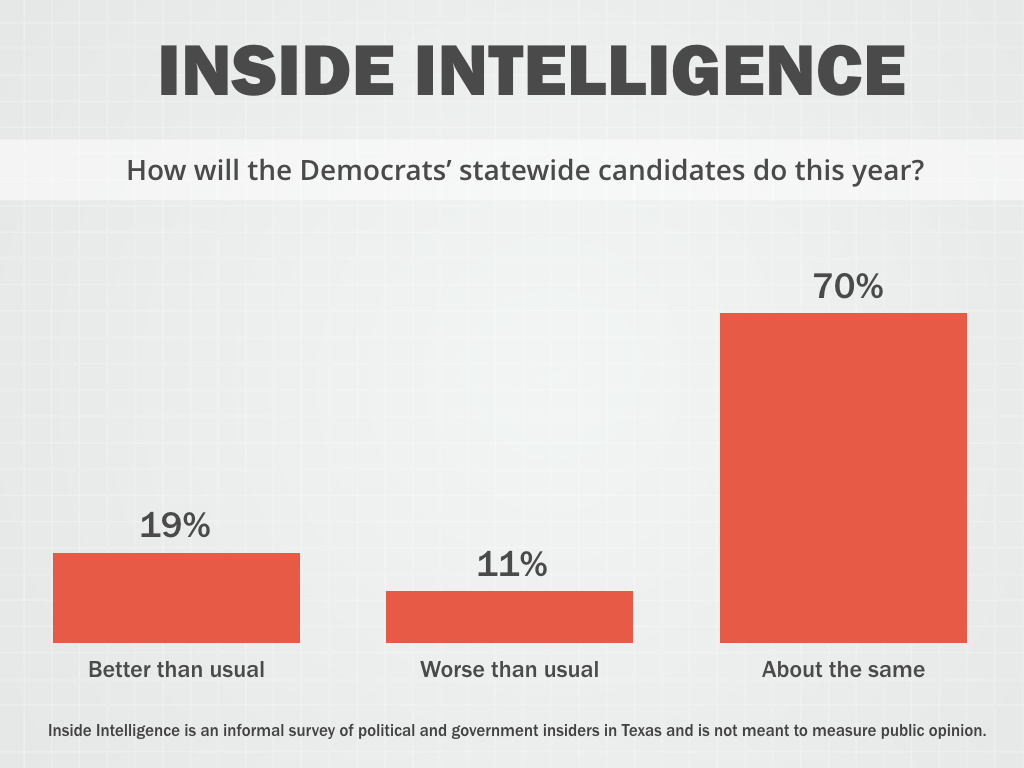 How will the Democrats’ statewide candidates do this year?

• "Democrats will bleed Hispanic voters at the Supreme Court level."

• "Unless Democrats can convince about 1.4 million more voters to suddenly show up, the result will be the same for them. Texas Democrats haven't been able to elect statewide since 1994, and hold the longest losing streak in nation (20 years). 2016 will add 2 more years to the total!"

• "Trump will be the Ds' greatest gift in a long time."

• "Honestly, how could they do worse? They've already lost ALL statewide races. You can't do worse than that."