For this week’s nonscientific survey of insiders in government and politics, we asked about those mounting attacks on presumptive GOP presidential nominee Donald Trump.

The candidate has  been on the receiving end of attacks from his rivals for the nomination but it seemed that in the past few days, the volume of criticism has increased with the reaction to Trump's attacks on the judge hearing the Trump U lawsuits and Hillary Clinton's takedown of Trump's foreign policy bona fides.

So we decided to ask the insiders about the cumulative effects of this latest round of criticism.

A small majority agreed that the new attacks are sticking more than previous attacks with 43 percent disagreeing that the new criticisms have additional sticking power.

Shifting to a specific example — U.S. Rep. Filemon Vela's vulgar instruction to Trump on where he can shove his border wall — nearly half the insiders evaluated the attack as aimed just at riling up the Democratic base. Another 16 percent thought the attack hurts Trump with independent voters. Fully 30 percent said it was too early to tell.

Meanwhile, 70 percent of the insiders thought Trump's comments on the Trump U judge suggesting his Mexican heritage makes it impossible to be impartial while hearing the case makes it more difficult for Republicans who haven't endorsed Trump to do so now. Another 22 percent disagreed.

Finally, we asked the possibility of Republican leaders holding an intervention with Trump to get him to tone down his rhetoric. On that one, 80 percent said the leaders would try to intervene but the attempt would not be successful. Just 12 percent thought GOP leaders would have success in persuading Trump to cool it. 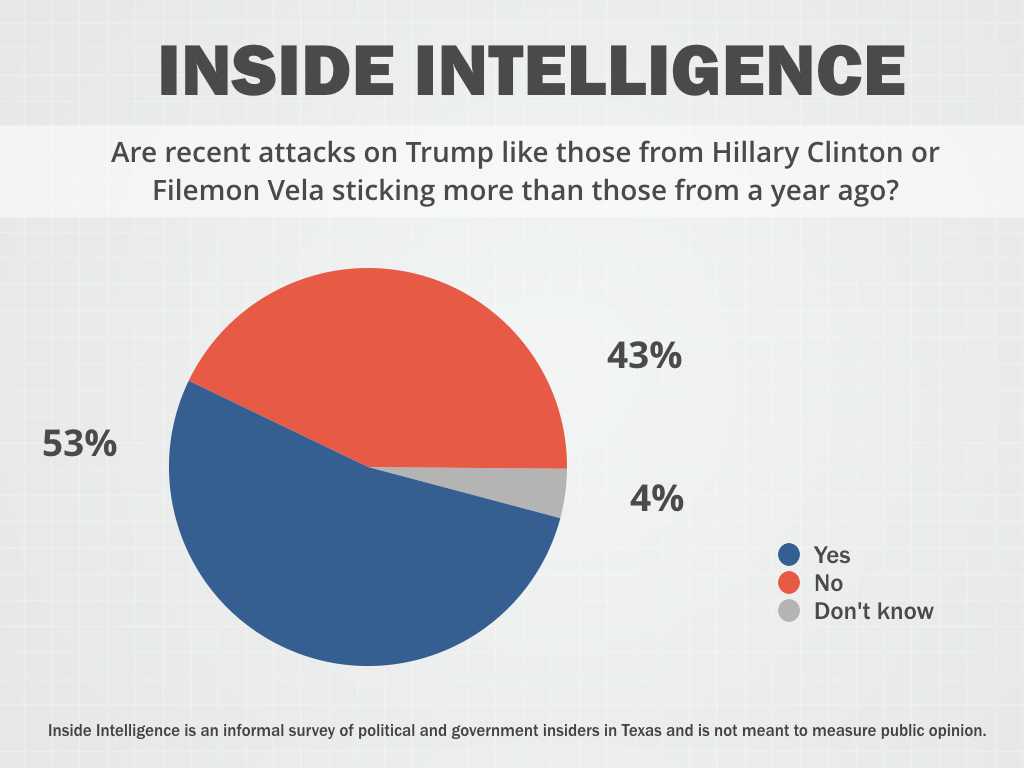 Are attacks on Donald Trump like those recently from Hillary Clinton or Filemon Vela sticking more than attacks from Trump's rivals a year ago?

• "Yes, fewer attackers means there's a greater chance today's attacking voice will actually be heard. Before, the airwaves were cluttered so to speak, whereas today that's not the case."

• "The full weight of the Democratic party and Latino leaders will be different from the GOP fights. And Republicans will be caught in the crossfire trying to support the party nominee vs. leading the party to 2017 and beyond."

• "The Trump supporters don't care or actually like it, and the Trump opponents already oppose him."

• "No. Trump is self-destructing. The attacks are barely relevant, especially crude comments such as those of Vela."

• "The larger general election audience might not be as charmed by racist xenophobic authoritarian rants as the 40 percent of Republican primary voters who supported Mr. Trump were." 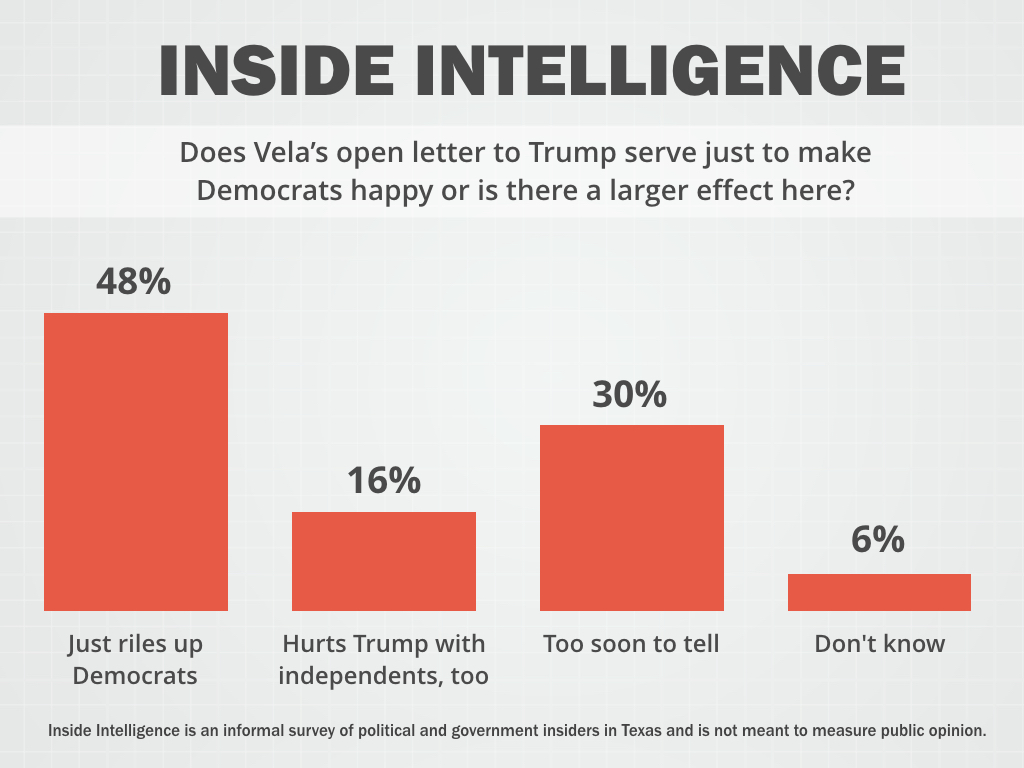 Does Vela's open letter to Trump serve just to make Democrats happy or is there a larger effect here?

• "Not only does it rile up Democrats, but it amps up the Trumpkins, too. They love it when someone attacks their beloved."

• "It adds zero to the debate other than lowering our side to Trump's level."

• "One thing we should have all learned over the past few months is that with Trump, everything is different. There is simply no way to predict at this point just how he will ultimately deal with this matter. Certainly, at first blush, his recent shenanigans would give the appearance of adding another arrow to the quiver of those who want to paint him as, at best, unpresidential, and at worst, a raving lunatic. Time will tell."

• "It does neither. It perhaps raises Vela's profile when he goes dialing for campaign donations. Right now, practically nobody in this country knows who Vela is and of those who do know him, a large majority don't care what he has to say, since they're busy trying to manage their own lives."

• "I did not even know who Vela was until he said this. Now I know him as the TMF of the Texas congressional delegation. Just another blowhard trying to impress his donut shop buddies." 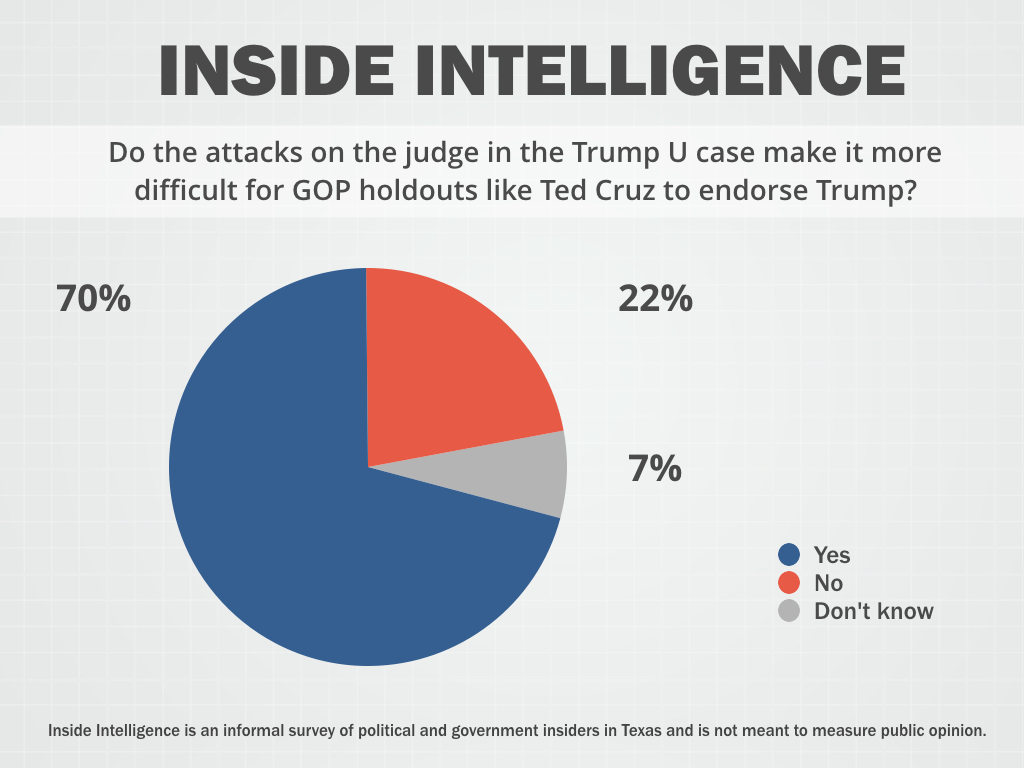 Do the attacks on the judge in the Trump U case and subsequent criticism of Trump make it more difficult for GOP holdouts like Ted Cruz to endorse Trump?

• "Here's the deal: it's not the only thing. It's one of many, many things that make it more difficult for holdouts like Cruz to endorse Trump."

• "Who knows if Trump really intended to destroy the two-party system. Ironically, those who withhold endorsement of Trump are proving that for some, principle and decency is more important than 'party unity.'"

• "Especially for Cruz and Rubio due to their ethnicity — what is more interesting is Paul Ryan and his obvious reservations."

• "I don't know about GOP holdouts 'like Ted Cruz.' However, it makes it more difficult for some GOP holdouts to endorse Trump — just not sure about Ted Cruz." 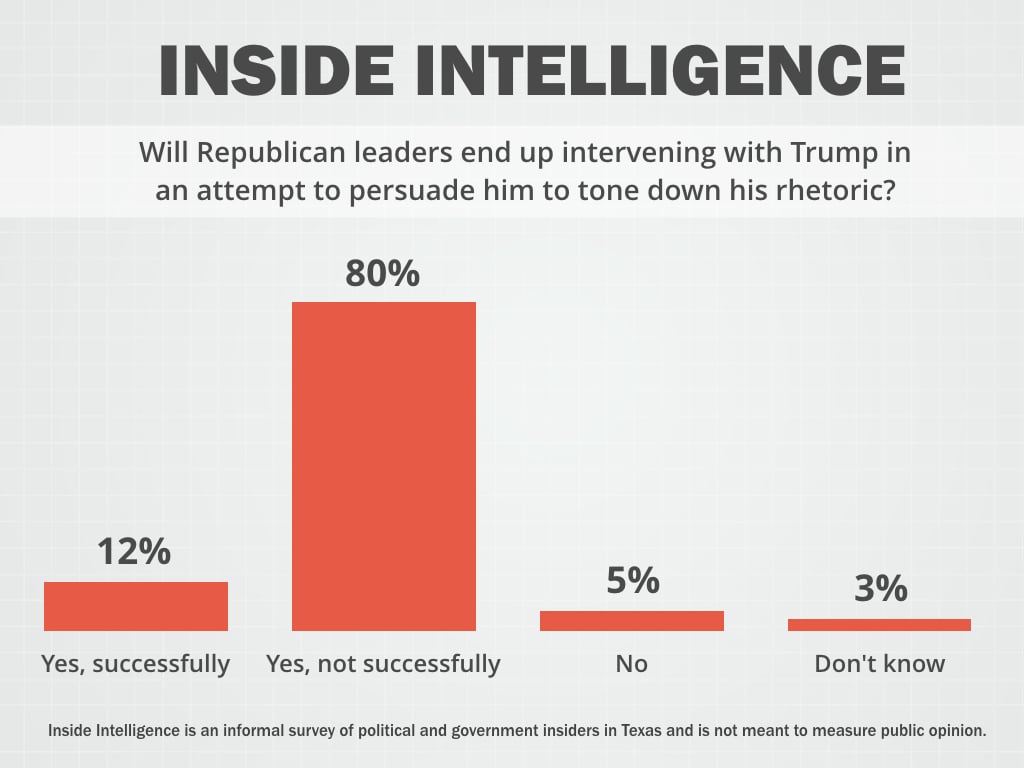 Will Republicans leaders end up intervening with Trump in an attempt to persuade him to tone down his rhetoric?

• "His boisterous comments and braggadocio make Muhammad Ali look like a church mouse. You can't shut The Donald up!"

• "Trump does what Trump wants; it's the sound bite the media wants and Trump knows how to bite down hard and not let go. People are enjoying the sideshow of presidential politics, Trump's demeanor against those that don't toe the Trump line, and his attitude about anyone and everyone in politics is what drives viewers to news cycles and media clips."

• "GOP leaders are already intervening, publicly and privately. But it's a long campaign, and it seems unlikely that Trump can control himself into November."

• "The internal polls are what drives Trump to say what he does. He's reaching those who've never had a dog in the fight before."

• "Definitely 'yes.' I think partially successfully, which was not a choice so I chose 'successfully.' He won't need much intervention if his rhetoric begins to hurt him with the general population. He's a psychopath, not stupid."