For this week’s nonscientific survey of insiders in government and politics, we asked about who’s on the right track and who’s on the wrong track with elections approaching.

May was an eventful month in the political world. It began with the folding of final opposition to Donald Trump in the GOP presidential contest followed by Trump's securing enough delegates to assure him of the nomination at the national party convention.

Meanwhile, the state Republican party held its convention this past month and the party primary runoff elections finalized the slate of major party candidates who will appear on the ballot in the November general election.

With so many inflection points in the rearview mirror, we asked our insiders a set of right track/wrong track questions to gauge their thoughts on the trajectories of the national political parties as well as the legislative chambers.

The insiders exhibited a mostly pessimistic mood about the immediate future of these political institutions. The Republican Party is seen as on the wrong track by 55 percent with just 8 percent saying the party is on the right track. The Democratic Party is also underwater, with 48 percent judging the party as on the wrong track and 20 percent saying it is on the right track.

That pessimism carried over to the insiders' take on the Texas Senate, with 59 percent saying the chamber is on the wrong track and 23 percent saying it's on the right track.

The exception to the rule is the Texas House, with 67 percent of the insiders saying the chamber is on the right track and 11 percent saying it's on the wrong track. 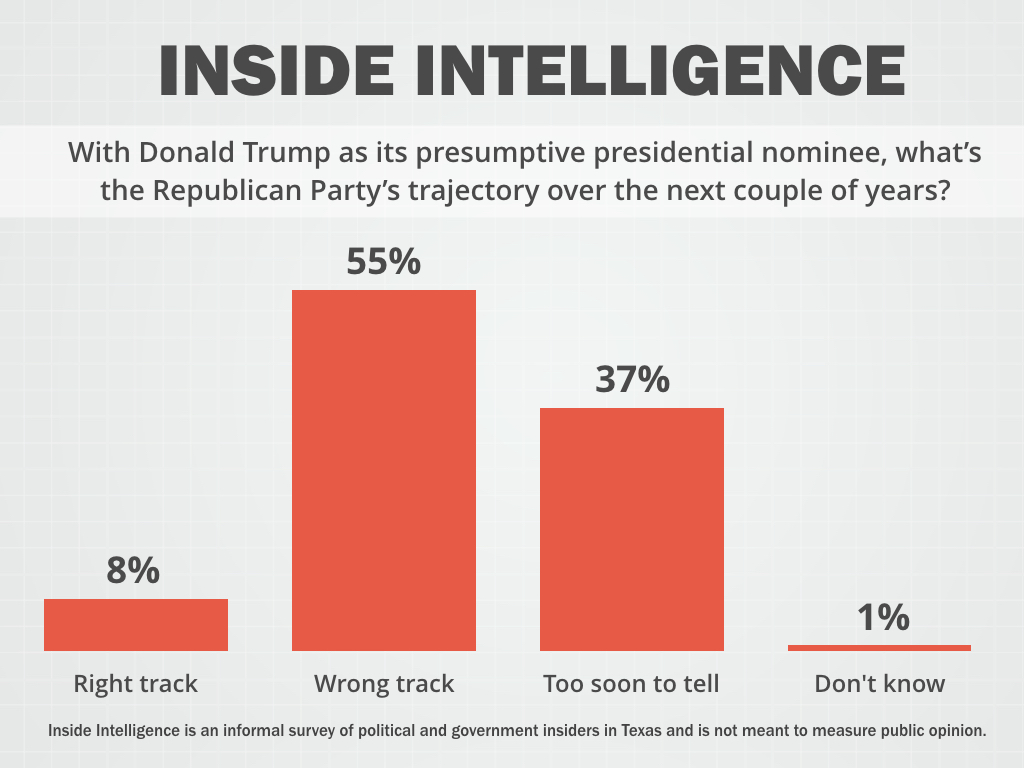 With Donald Trump as its presumptive presidential nominee, what’s the Republican Party’s trajectory over the next couple of years?

• "I clicked 'right track,' but it's important to clarify that I mean it's the right track for Democrats, not Republicans."

• "Nationally or here in Texas? Here in Texas, it's steady as she goes; Trump has no real effect and the RPT marches onward. Nationally, it's too soon to tell, but I'm guessing Trump doesn't have long coattails in states like Wisconsin (You're welcome, Feingold), North Carolina, and Ohio."

• "For all we know, Trump may be the end or the beginning of a new GOP."

• "Hopefully, they'll purify the party. Ridding themselves of the RINOs that are really Libertarians that have taken over the runoff elections." 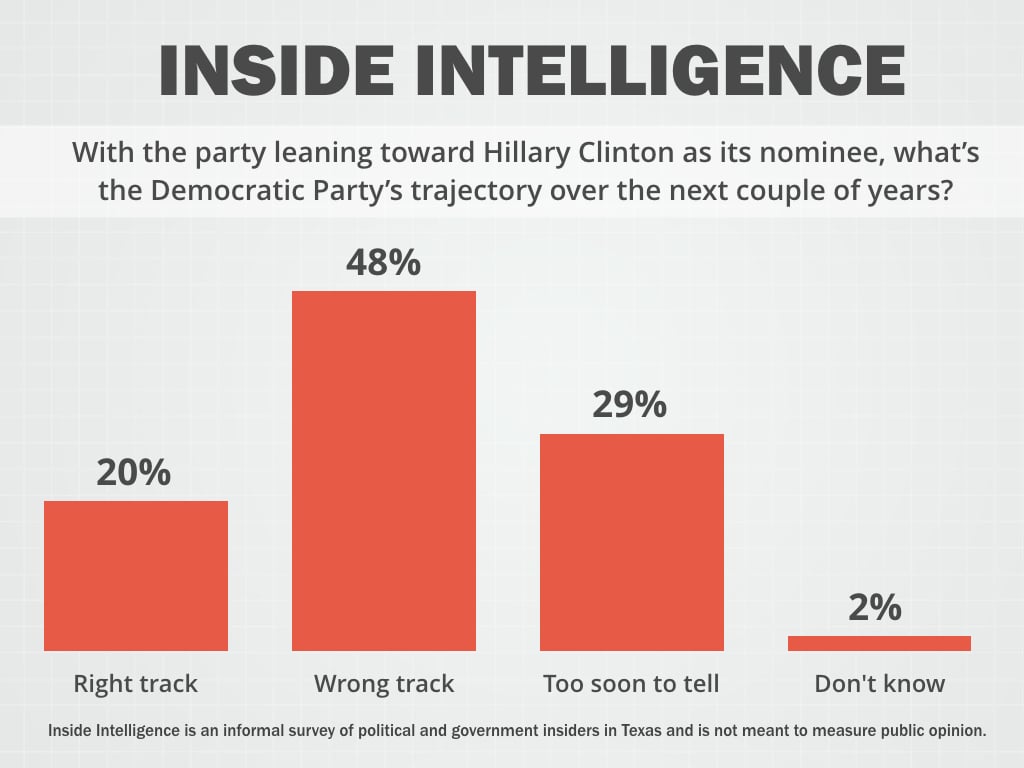 With the party leaning toward Hillary Clinton as its nominee, what’s the Democratic Party’s trajectory over the next couple of years?

• "I've yet to run across a Democrat who's enthused by Hillary. It's more of a resignation to the inevitable."

• "The Democratic Party leadership is just as out of touch with the electorate in one direction as the Republicans are in the opposite direction."

• "With a generic conservative GOP candidate, Hillary should have been a near-certain loser this year. If she wins, it's a huge bonus for her party, even if voter fatigue with Democrats will make her extremely vulnerable in 2020."

• "As with the Bushes, the time for the Clintons is over. They are the past, the future is elsewhere."

• "Wrong track for both parties. Should yield more independent voting, but probably won't." 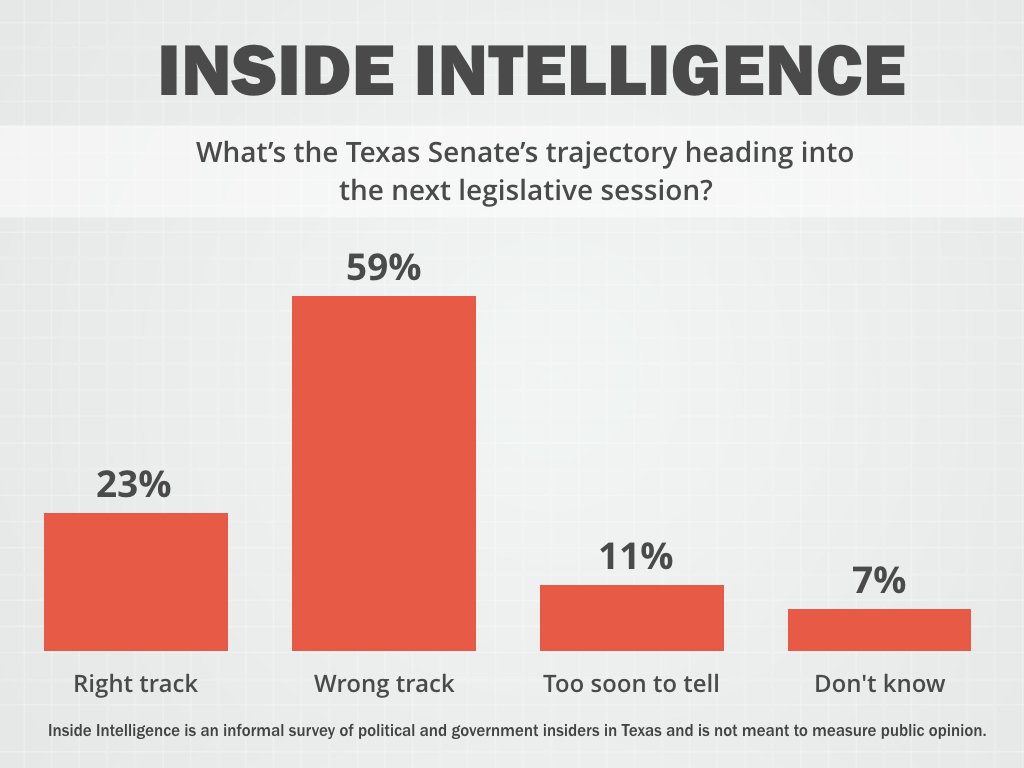 With the fall legislative election slates now set, what’s the Texas Senate’s trajectory heading into the next legislative session?

• "I can see the ad now: Texas Senate — NEW and IMPROVED! Even more Tea Party!!"

• "As long as they remain focused on convincing their constituents that they are overtaxed and ignore the basic economics of return on investment, we will remain behind in dealing with growth and economic opportunity."

• "Someone told me this weekend that they now feel overqualified to serve in public office. The Senate is a perfect example." 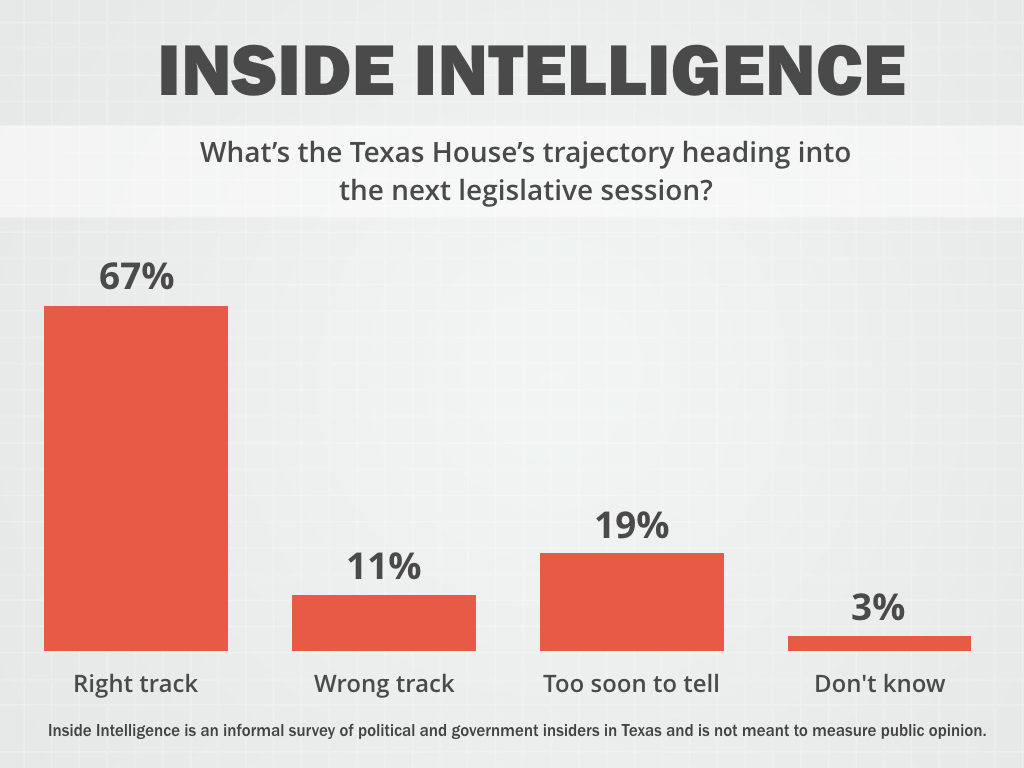 What’s the Texas House’s trajectory heading into the next legislative session?

• "It will be the same — the right wing will be divisive — the Straus wing will be condescending — it will lumber along, but all the ideas will come out of the Senate side."

• "As long as Speaker Joe Straus is there, the House will not go TOO far astray and might actually do some positive things! Thanks, Speaker Straus for being the 'adult' in the room among Republican officeholders."

• "Right track, but turmoil continues. And the transition to the next speaker (whenever that occurs) won't stop the turmoil."

• "Straus is the best mind that Texas politics has right now. Long may he serve. The fact that the House, perhaps necessarily more prone to zaniness and extremism than the Senate, has become the more mature body, is testament to Straus' steady hand."

• "Straus makes it imperative that conservatives continue to replace his lieutenants. Only then can Texans' conservatism be expressed."