For this week’s nonscientific survey of insiders in government and politics, we asked about the showdown between Texas and the federal government on transgender student guidelines.

The Obama administration and Texas' Republican state leaders have dug in their heels over the past couple of weeks on how to accommodate transgender students when it comes to which bathroom they use.

With the federal government tying bathroom access to Title IX funding, we decided to begin this week's survey by asking whether Texas' stance opposing the Obama administration might endanger an important source of funding for public schools.

The next question, which asked what step state leaders would take in response, was overtaken by developments this week when Attorney General Ken Paxton announced on Wednesday that he was leading a group of 11 states in filing suit against the Obama administration directive.

The final two questions dealt with the political ramifications of the current showdown over transgender students. Half the insiders thought the Republicans benefit more from the conflict with about 20 percent saying the Democrats benefit more. And another 20 percent said neither party benefits more.

On the final question, 44 percent of the insiders thought that among the GOP leadership, Lt. Gov. Dan Patrick has communicated most effectively with GOP voters on the transgender controversy. Another 39 percent said no leader was particularly effective. Four percent named Gov. Greg Abbott and another 4 percent named Paxton. 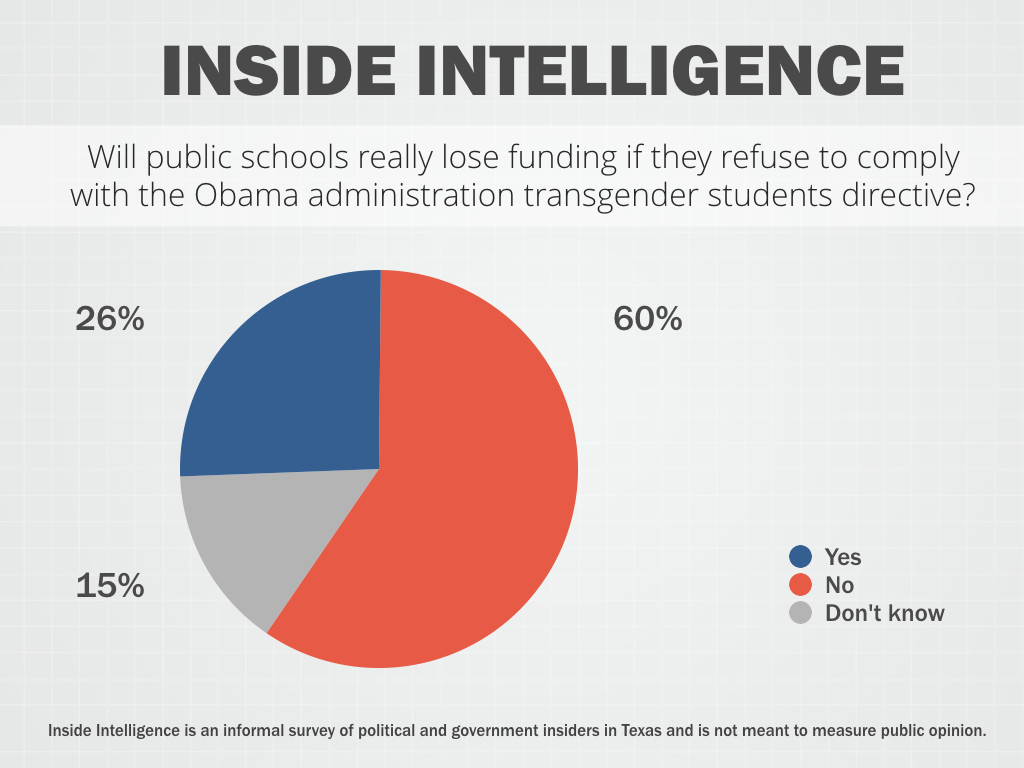 Will public schools really lose federal education funding if they refuse to comply with a new Obama administration directive regarding transgender students?

• "Failure to fund public schools would become a PR nightmare for the Democrats. Doing so will give the R's another silver bullet campaign topic for the general."

• "No public school will be denied federal funds because they refuse to comply with a rule that allows boys to shower with girls — this is an empty threat from Obama put forward only to pander politically."

• "The IMPORTANT thing is to protect children, even if it means losing a pittance of school funding, federal funding." 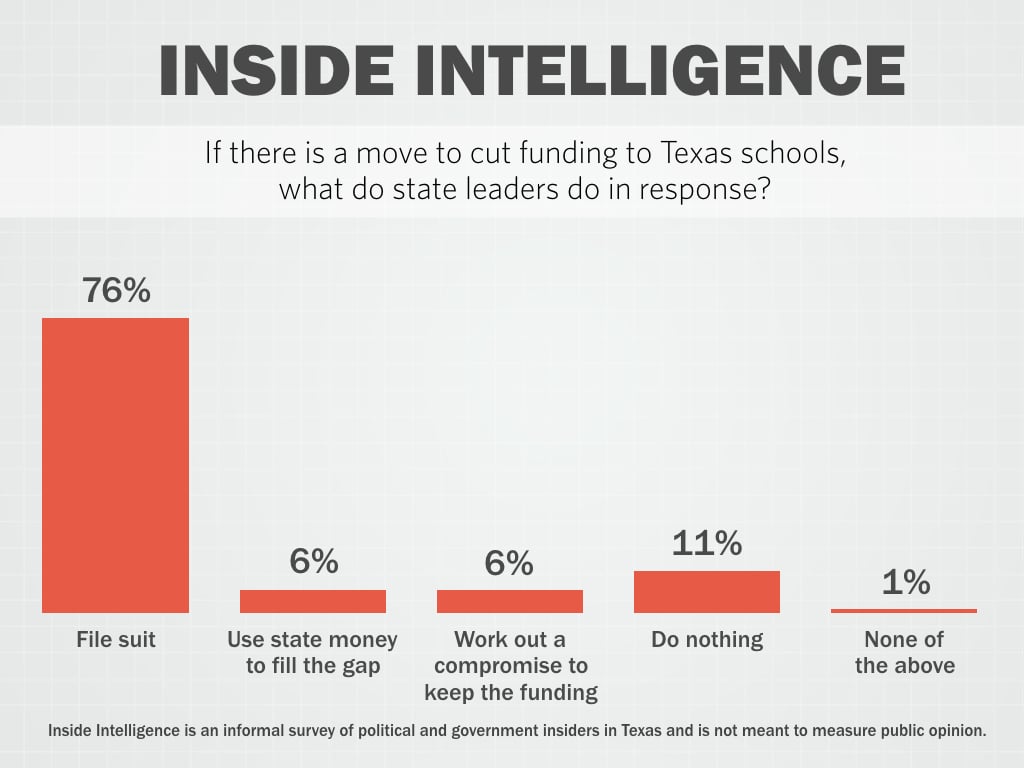 If the Obama administration moves to cut funding to Texas schools over transgender students, what do state leaders do in response?

• "Then they can blame the big bad evil people in Washington for depriving our children of an education and education funding."

• "Suing the federal government goes without saying. There is nowhere close to enough state revenue to replace the billions in federal aid that would be lost, so that's out. Doing nothing is even worse that not even trying to fill the gap. Compromise? Dan Patrick?"

• "So-called transgenders have no legal standing — they are not a protected class nor are they likely to be since there is still a great deal of debate among mental health professionals about the nature of who they are versus who they say they are. If the Feds go to court, it will only be to rev up their political base — they are not likely to win."

• "General Paxton would see a high-profile lawsuit as a last chance to save himself in the court of public opinion. This also could be interesting vis-à-vis the new SCOTUS justice."

• "It's be a boon to the quality of education to remove federal strings." 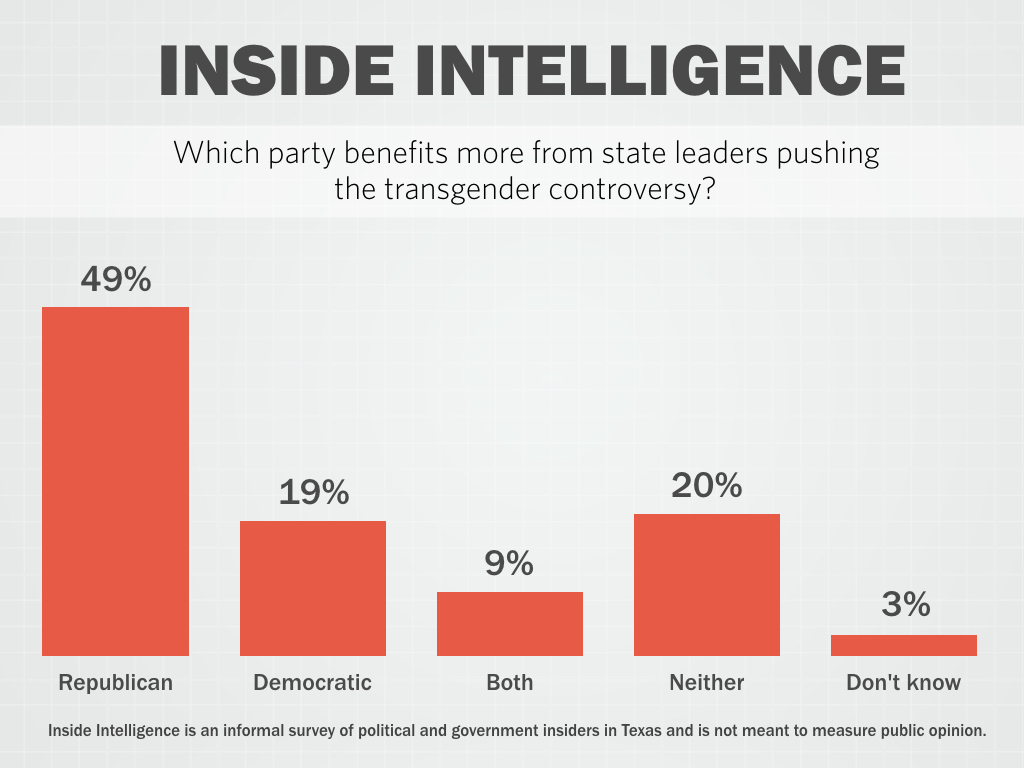 As an electoral issue, which party benefits more from state Republican leaders pushing the transgender controversy?

• "'Real' Republicans will just stay home as they are DISGUSTED by what has happened to their party - it is no longer the 'grand' old party."

• "This is the type of issue that makes Democrat consultants grab the tequila during general elections. If you're explaining, you're losing."

• "Short-term, this is obviously a good year for Republicans to run against a despised minority. Longer-term, it's yet another way for the party to alienate young voters."

• "Based on the overwhelming result of both 1) the Pastor Protection Act in the House last session, and 2) the Democrat vote against HERO in Houston, it is very difficult to argue that the bathrooms issue will help Democrats in Texas. But note the error in your question: This issue is being pushed by Democrats, not Republicans. Transgenders have used their personal discretion to choose a bathroom for decades. There was no problem until the Democrats manufactured one. The press is constantly accusing voter ID as being a solution in search of a problem; why don't we ever hear the press characterize the HERO ordinance or the Fort Worth ISD decision in that way?"

• "I'm not sure 'benefit' is the word I would chose... but the politics mobilize the Republicans more effectively than Democrats. Or at least those R's who dominate the party at this moment." 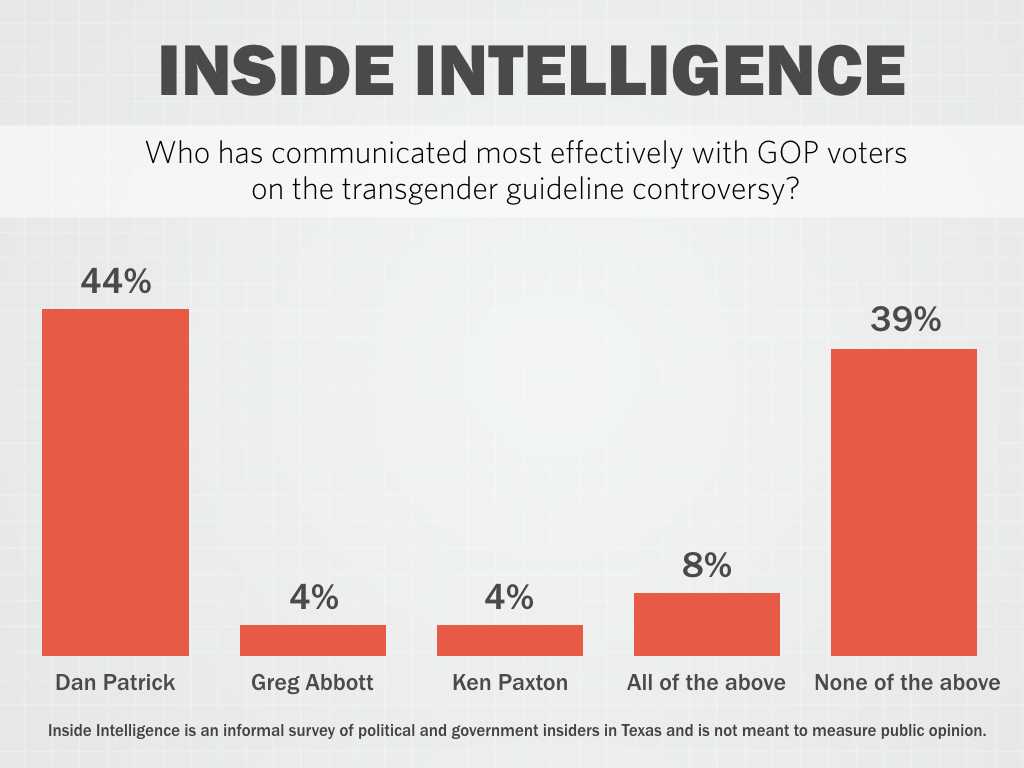 Who has communicated most effectively with GOP voters on the transgender guideline controversy?

• "From opposing Cruz, to owning Cruz, Patrick is an old school political ninja. The Texas GOP is his; enjoy the ride."

• "If 'effective communication' means whip up the masses, that's what our statewide electeds are good at."

• "Love him or hate him, Lt. Dan is the face and voice of the social conservative Republicans because he's articulate, media savvy and it's from his heart."

• "Patrick has done a masterful job of turning this into a school choice issue."