For this week’s nonscientific survey of insiders in government and politics, we asked about that presumptive GOP presidential nominee — Donald Trump.

With the last remaining challengers to Trump throwing in the towel last week, the path is now unobstructed for the New York billionaire to claim his spot on the general election ballot for president. So we decided to ask this week what effect nominee Trump has on Texas.

We started by asking the insiders what Texas Republican voters do in the fall with Trump at the top of the ticket. Almost half of them said that GOP voters end up sticking with the party with another 31 percent saying that voters will either stay home or skip the presidential race.

Just 5 percent, meanwhile, saw Texas Republicans throwing support behind a third-party or independent candidate. And 4 percent thought that Republicans would look to the Democrat in the race.

We finished by asking if Rick Perry would hurt or help a Trump candidacy by serving as the candidate for vice president. On that question, 46 percent of the insiders said he hurts the ticket while 35 percent thought he helps. 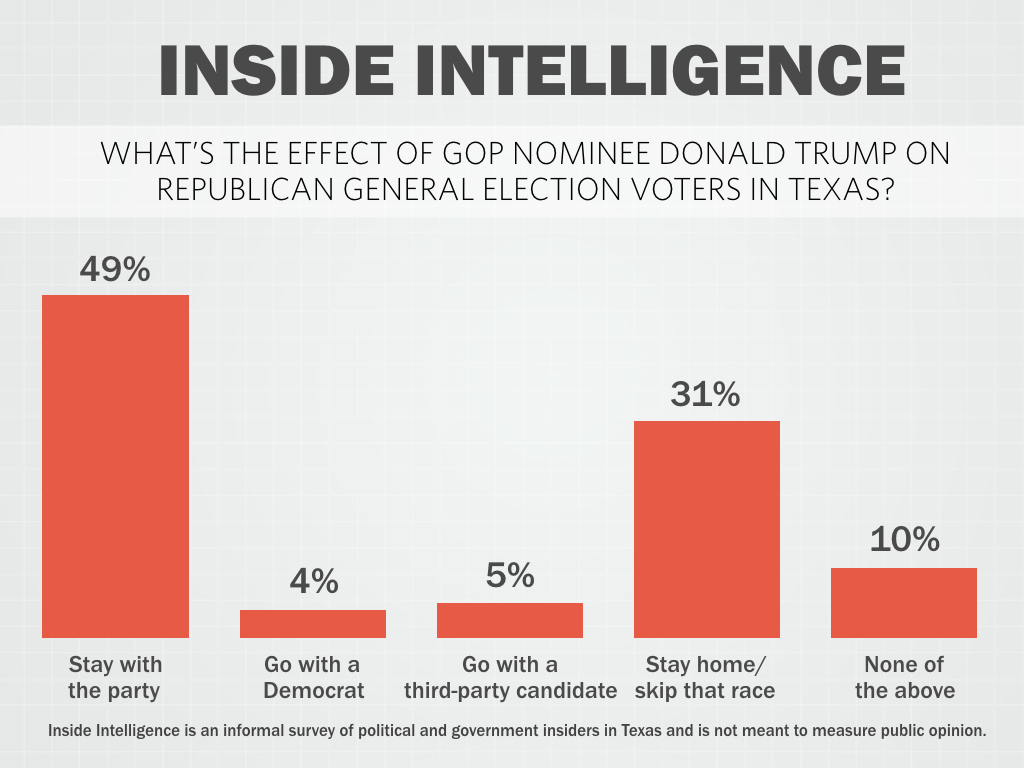 • "A good Republican will never be able to vote for Hillary, so my guess is they'll just stay home, since in most places there aren't any other contested races to draw them to the polls."

• "The Donald will now begin to morph into that more moderate conservative Republican to appeal to the great middle of the party long put off by the hardliner social conservatives. He will lose some of the Cruz supporters but he may gain just as many who would never have voted for Cruz anyway."

• "All politics is local. GOP Texans may not support Trump with passion, but you better believe they'll support their down ballot Republicans."

• "The status quo is out the window in this cycle. Who would have predicted this? And who, with any level of certainty, knows what's next?"

• "While Trump's candidacy would normally keep many Republicans home, Clinton's candidacy will inspire many who would otherwise skip the race to come out. I think the sport terminology is offsetting fouls." 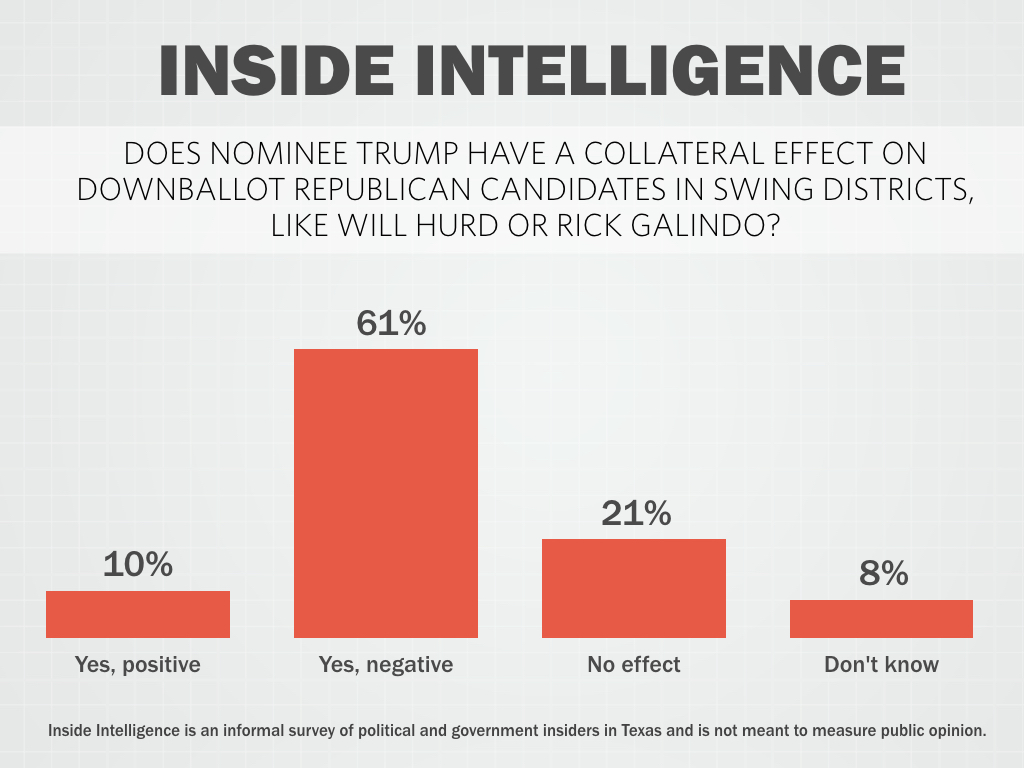 Does nominee Trump have a collateral effect on down ballot Republican candidates in swing districts, like Will Hurd or Rick Galindo?

• "Congressional District 23 is a pendulum district based on election cycle; Presidential cycle goes to Dems, and interim cycle goes to Repubs. Because of Trump, Hurd may be the last Republican to represent CD-23."

• "There doesn't seem to be an attempt to frame either race as a 'race against Trump.' As such, it's unlikely that Trump plays a deciding factor in these races, especially Hurd's race. Gallego seems to be sticking to a standard list of 'concerns' about Hurd as his message platform."

• "These are districts with Hispanic voters and I believe the Democrats will use Trump’s words against him to motivate Hispanics to vote in these two districts."

• "It affects turnout. Turnout is key in swing districts. I can't help but think the GOPers aren't motivated to turn out, whereas the Dems are jazzed. This is likely bad news for Hurd."

• "If you are Republican in a swing district, you need to be seriously contemplating your next career move." 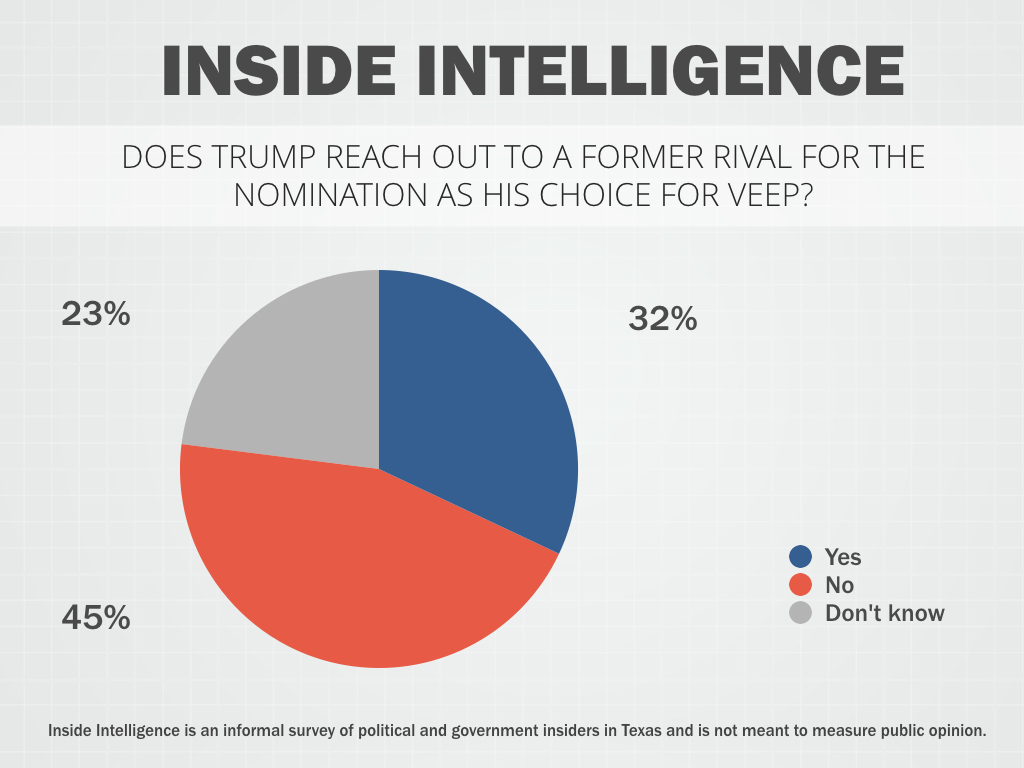 Does Trump reach out to a former rival for the nomination as his choice for veep?

• "I think he'll take anyone who will take him."

• "The only one I could see him reaching out to is Kasich, as he'll need Ohio to win and someone with both state and federal experience that has inroads with congressional leaders."

• "His former rivals all hate him and hope for a future if the traditional Republican Party survives."

• "It doesn't appear to be personal with him — it is personal for most of his former opponents, however." 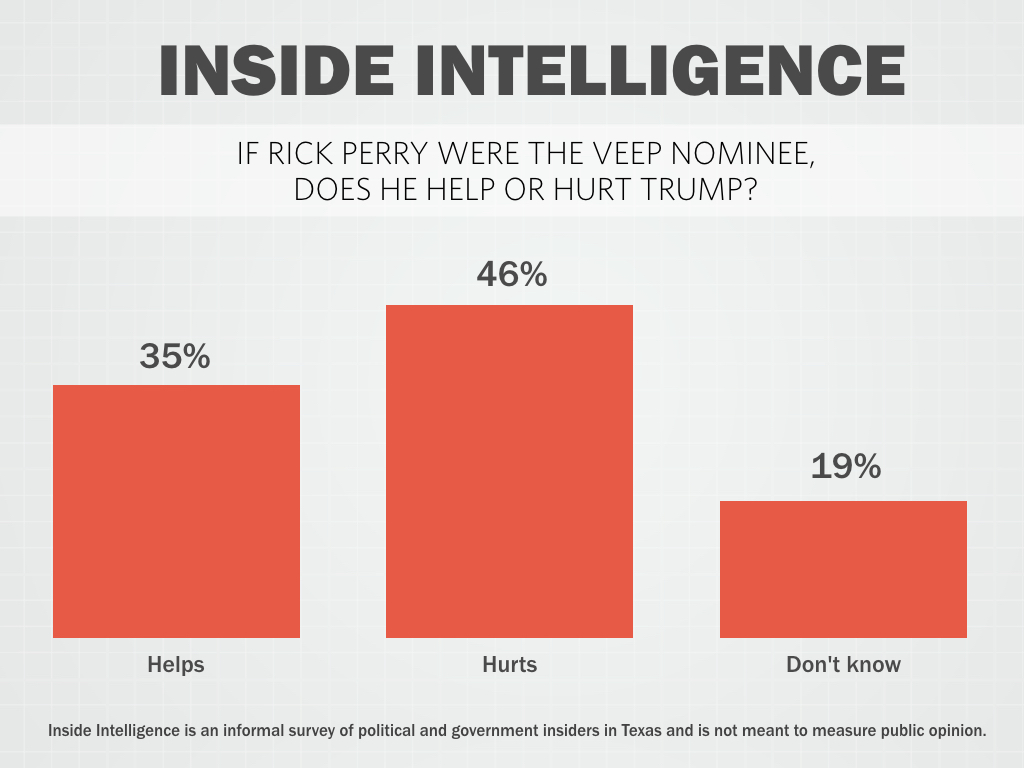 If Rick Perry were the veep nominee, does he help or hurt Trump?

• "We love Perry, but the rest of the country thinks he's a doofus."

• "After warning us how bad Trump is, Perry couldn't wait to embrace the dark side of the force."

• "He brings successful governing experience, excellent conservative bona fides, and is a hell of a campaigner. I'd say that helps."

• "Probably not much of either; Perry would be a poor choice, given that Texas isn't in play."

• "This would never happen. Trump likes winners. And that is not Perry's national brand."

• "As he's about the only one who has indicated he would take the job, we may perhaps see."