For this week’s nonscientific survey of insiders in government and politics, we asked about those Sunset Commission reviews.

More specifically, we wanted to know more about recent calls for a sunset review of the Sunset Commission. So we kicked off this week's survey by asking whether putting Sunset under sunset is an idea worth pursuing.

A strong majority of the insiders (70 percent) agreed the idea is worthwhile with 28 percent disagreeing.

We followed by asking the insiders to pick the biggest problem with the sunset review process, listing four often cited problems. The majority of the insiders didn't bother to pick among those options and instead said all of them constitute a big problem for the agency.

We next asked about a couple of high-profile agencies — the Railroad Commission and the state transportation department — that are up for review again after recent attempts to complete a full review fell short in the Legislature. In both instances, the insiders were nearly evenly split on whether the agencies' reviews would meet with more success in the upcoming legislative session. 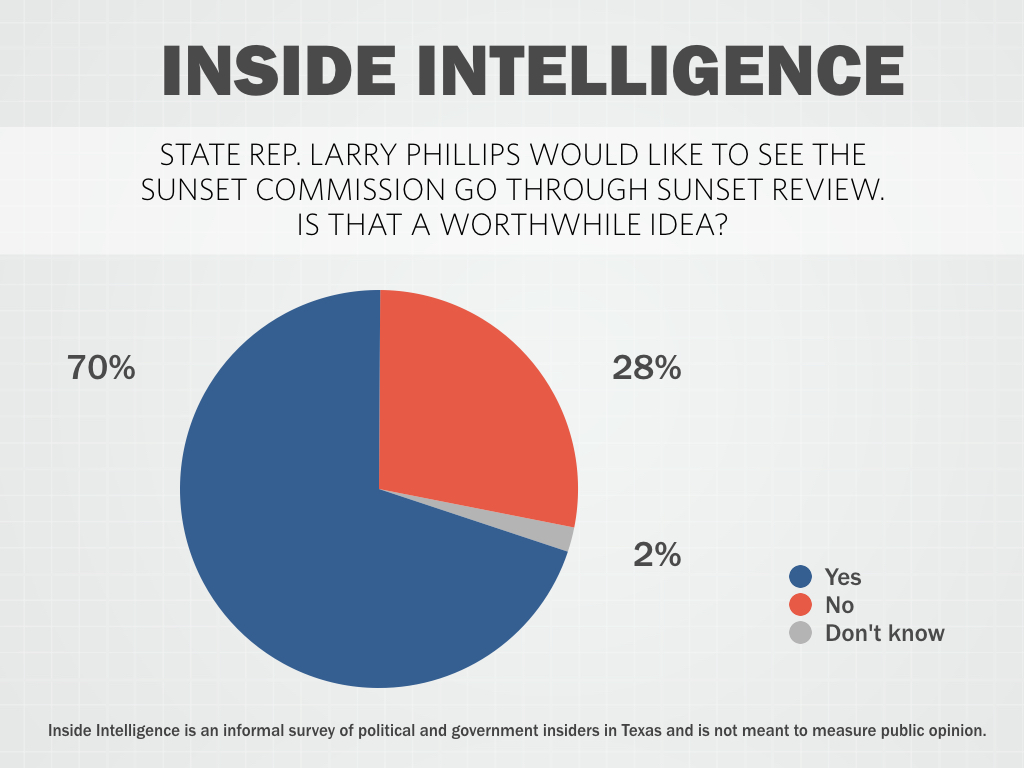 State Rep. Larry Phillips would like to see the Sunset Commission go through sunset review. Is that a worthwhile idea?

• "There may be better ways to do what they do. Or there may be things they review that should not be in the purview of the Sunset Commission. Also, the large 15 agencies may be better reviewed in parts. While it is not going to get rid of the process, a review may serve to find ways to do things better."

• "The Sunset Commission needs to be protected from politics in order to do a good job of assessing the government bureaucracies."

• "Of all Texas agencies, the Sunset Commission should be of highest priority for review and serious consideration be given for elimination. Its one-size-fits-all mentality and the making of recommendations that impede the state's economy have been present for far too long."

• "If putting sunset through sunset would help to sunset sunset, then I'm for it. Sunset is a painful drag more than it is anything else."

• "An alternative to a Sunset Commission could be that the joint committees attached to each agency. For example, the Railroad Commission would be jointly reviewed by the Senate Natural Resources and House Energy." 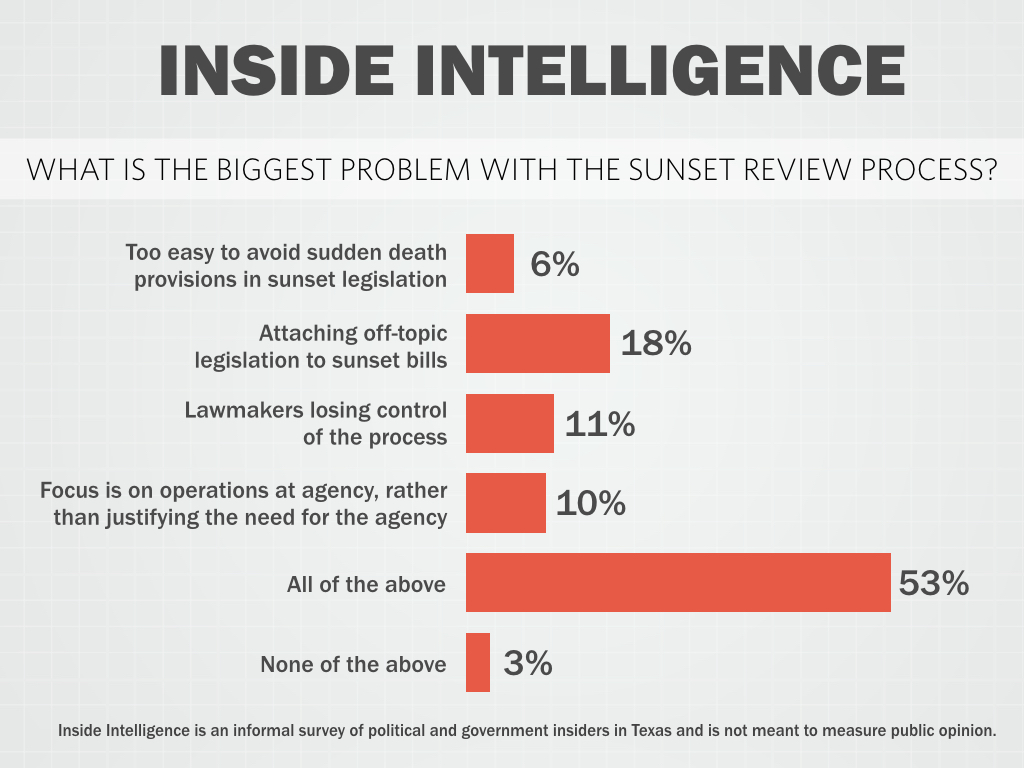 What is the biggest problem with the sunset review process?

• "It is a much needed and valid process. It does not need to be eliminated. If it were, there would be no regular, methodical process to review state agency operations. It is too bad that higher education isn't subject to the sunset review process!"

• "Avoiding sudden death is not a bad thing. In all the instances where a lifeboat bill had to be used to keep the agency alive for two more years, the Sunset Commission had already recommended it not be abolished. It is most perplexing that there is so much angst about a process that was set up by the Legislature AND is run by the Legislature. The Speaker has it right — self-regulation."

• "Show me when it actually worked and we shut down an agency."

• "The staff level process is pretty good. What happens under the Dome is NOT Sunset's fault."

• "Staff without detailed knowledge of agencies in conjunction with legislators assigned to the Sunset Commission review agencies sometimes coming up with suggestions that sound good but aren't feasible." 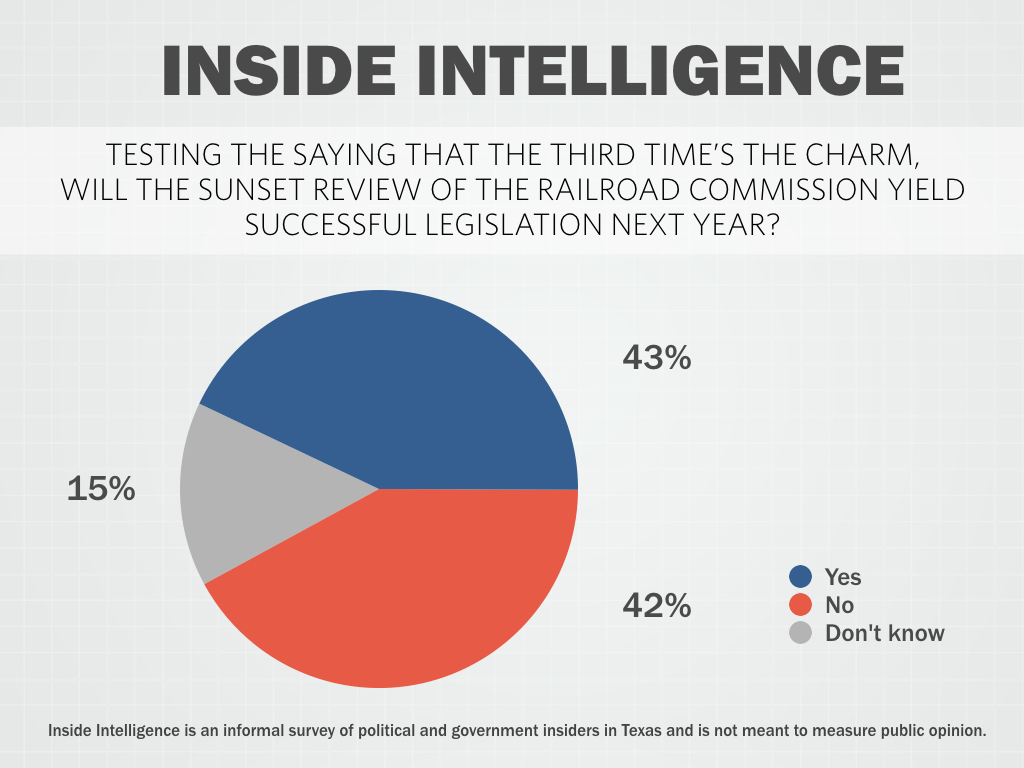 Testing the saying that the third time’s the charm, will the sunset review of the Railroad Commission yield successful legislation next year?

• "It's logical and helpful to voters to know that they're voting for overseers of the oil & gas industry, rather than railroads."

• "The fact of the matter is that it already has yielded successful legislation. Ninety-plus percent of Sunset's non-political recommendations were adopted in other legislation in 2011, 2013, and 2015."

• "I hope not. Just leave the place alone. No amount of tinkering with the RRC's laws is going to do what the elected commissioners couldn't do on their own."

• "DPS was punished about three times with reviews back in the 2000s and look at them now — they're now a border patrol agency and the Texas Rangers perform public integrity investigations instead of quelling."

• "Special interests always keep the Legislature from getting rid of worthless agencies. Besides, it gives the Republicans three elected offices!" 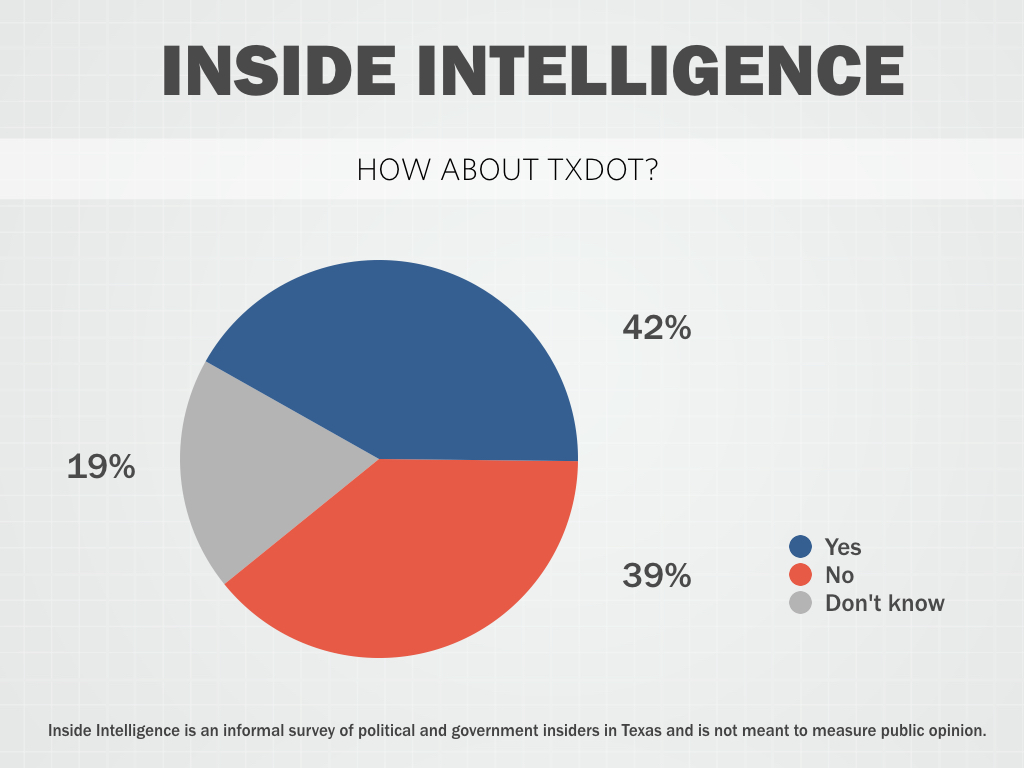 • "TXDOT is every member's pork and economic development need. There are a lot more fingers in that pie. This would be a great one to break into pieces. Maybe Sunset functions of the agency if the bill containing the revisions for a specific program doesn't pass."

• "TXDOT needs an ass whoopin'. When sitting commissioner requests information from the agency and he never gets it, there is a problem. This has happened. This agency is a joke and they operate and live in an era that time forgot."

• "No. TxDOT is a whale that sunset is not going to be able to steer."

• "Too many birds feathering their nests off of the mismanagement to get any real reform."

• "Sounds like something Jimmie Johnson used to holler in the locker room."