For this week’s nonscientific survey of insiders in government and politics, we asked about those two embattled statewide elected officials — Ken Paxton and Sid Miller.

News coverage of the attorney general and the agriculture commissioner has been unrelenting in recent months, leading us to begin this week's survey by asking the insiders whether the men would survive their first terms in statewide office.

We pivoted then to transition plans should one or both men leave office early. When asked what Gov. Greg Abbott would do with a vacancy at attorney general, the insiders were evenly split between thinking Abbott would appoint a Supreme Court justice (37 percent) or that he would turn to an attorney in his shop (34 percent)

Another 8 percent thought he'd look at a former candidate for AG.

On what Abbott might do with a vacancy at agriculture commissioner, four in five of the insiders thought someone from outside the agency would get the appointment with another 10 percent looking for a previous candidate for ag commissioner to get the call.

Interestingly, no one thought that someone within the agency would be in line for a promotion to lead the agency.

Finally, we asked if the state would be better off with fewer elected heads of executive department. More than 60 percent said they didn't think that would be a good idea. 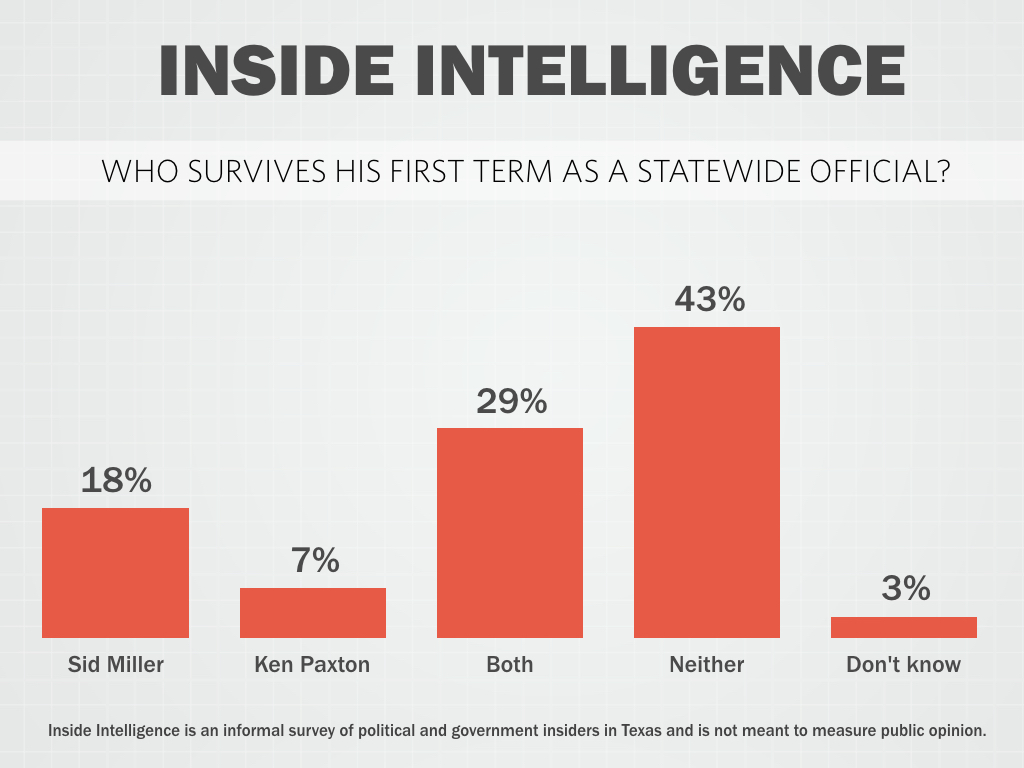 Who survives his first term as a statewide official?

• "There is plenty of reason for each of them to leave. The question is, who makes them do it?"

• "Paxton will survive, as the charges are unrelated to his official capacity. Miller misused government property (surprising nobody), and I think those charges will be forthcoming."

• "Both will be pressured to step down. The 'pressure' will come from tea party elites."

• "But survival just means you are still breathing. It does not mean you are well."

• "The wheels are turning too slowly on both these things cause a big blow-up anytime soon, particularly when the public doesn't really care. The public saw with Rick Perry that these so-called legal problems are often just political attacks — so rightly or wrongly, these two stories are largely media driven." 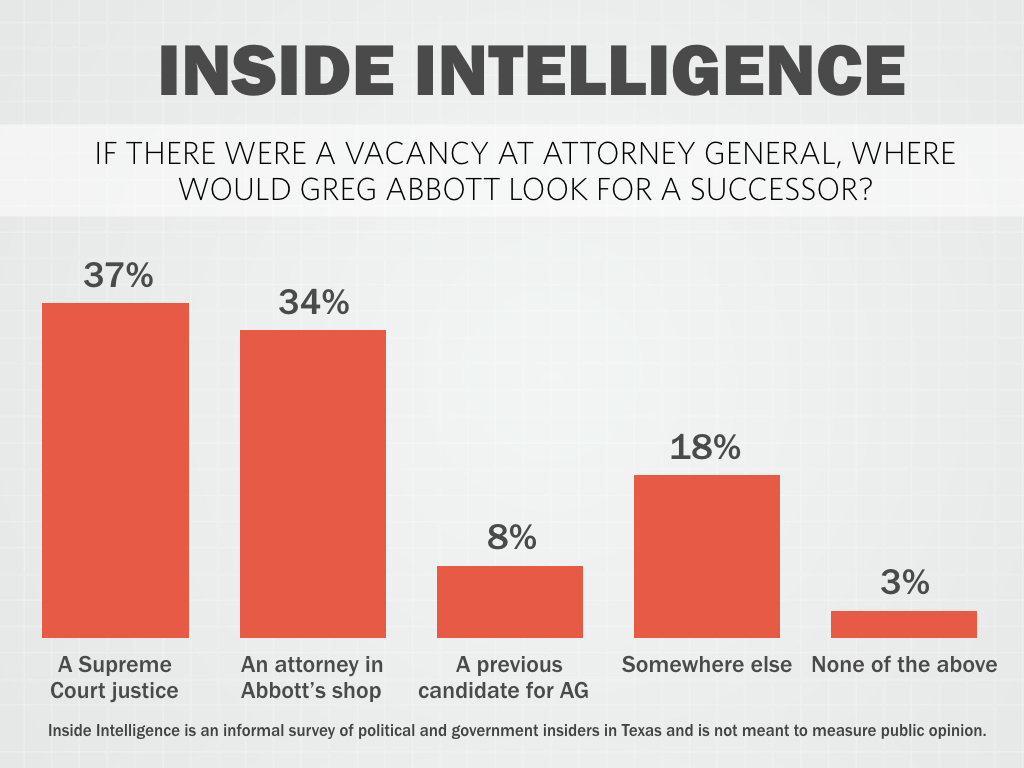 If there were a vacancy at attorney general, where would Greg Abbott look for a successor?

• "He will appoint someone from his staff or previous staff. If he was smart, he would appoint Dan Branch!!!"

• "Dan Patrick's son is looking a lot like Paxton's successor."

• "Appointing a SCOTX justice creates another vacancy for him to fill, so that's the smart move. It's a two-fer!"

• "Gov. Abbott has done a good job of attracting good people (e.g. Tryon Lewis as Chair of TxDOT) to join government, and he would be able to attract a top lawyer to do this for Texas."

• "Eva Guzman — top of the list. Would be absolutely nuts for Abbott to appoint a white guy off the court or from his own shop." 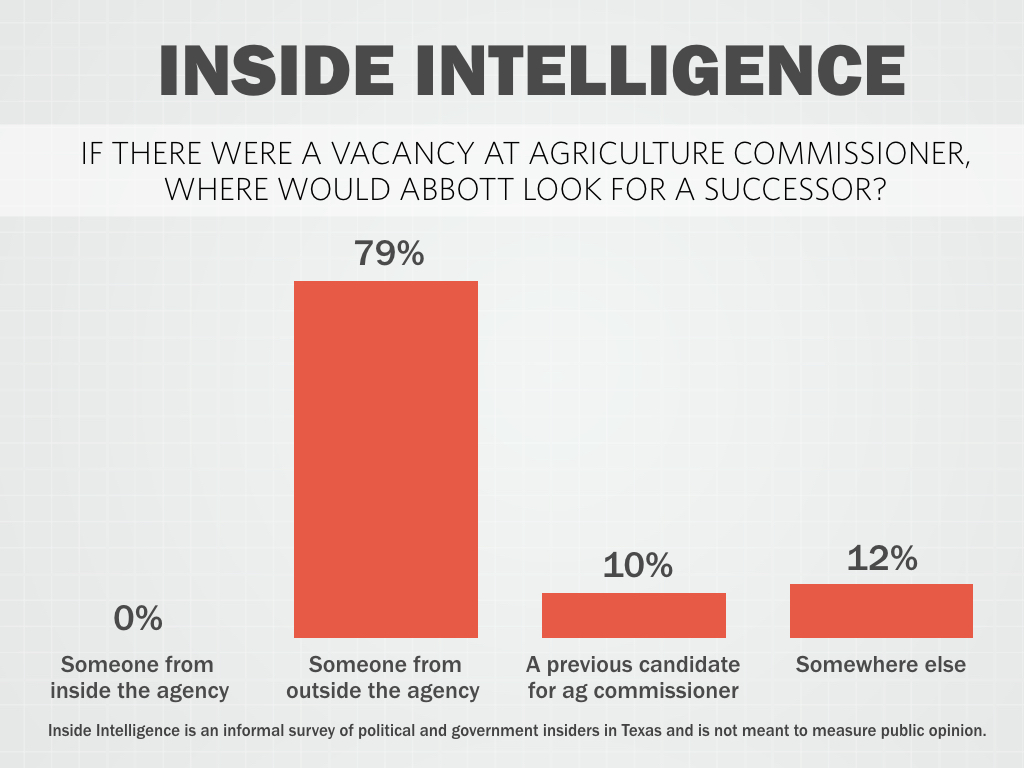 If there were a vacancy at agriculture commissioner, where would Abbott look for a successor?

• "More than likely a current state representative who has a strong interest."

• "Picking someone at random off Lavaca Street would be an improvement."

• "Here's a novel idea: find someone who actually does agriculture. Make it a real commissioner of agriculture!"

• "Ag commissioner would be a sweet payback for a favored supporter. And there would be no shortage of applicants." 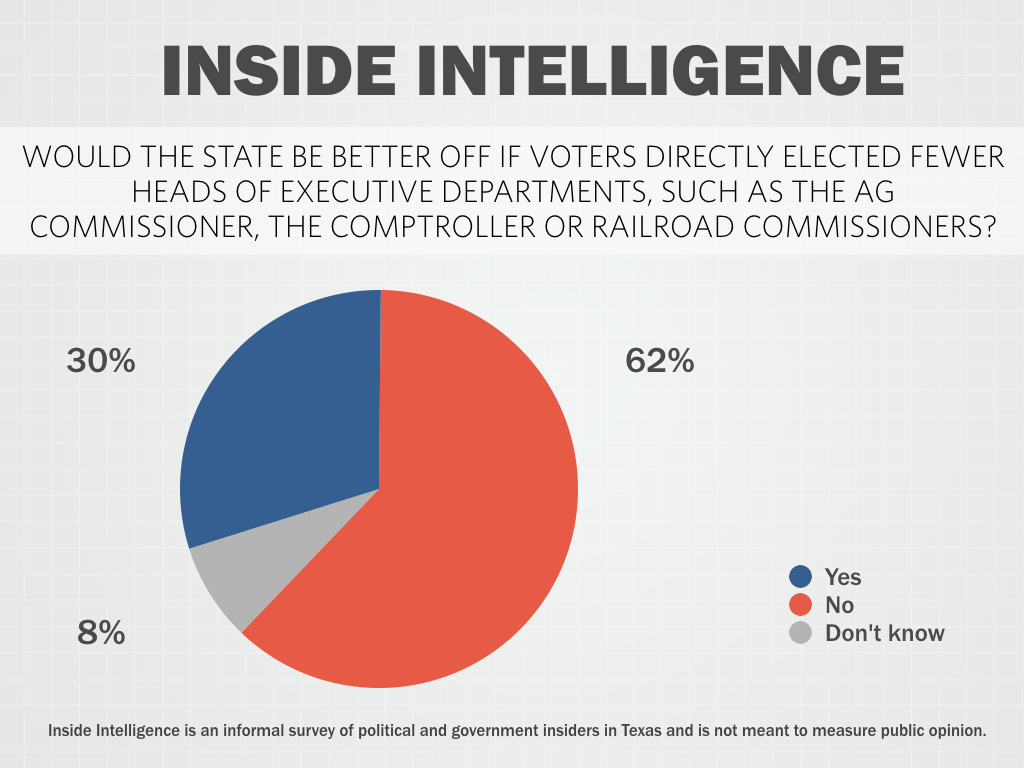 Would the state be better off if voters directly elected fewer heads of executive departments, such as the ag commissioner, the comptroller or railroad commissioners?

• "Look at the history of key agency appointees — seems voters do a better job overall than has occurred through cronyism."

• "Tough to know — appointments are just as partisan as elections. That said, today's elections are won by those who pander to the far reaches of their party, make outlandish comments that are either racist or sexist, and don't offer real solutions to serious problems facing our country and state."

• "The voters are the ultimate equalizers. They may make a mistake, but they usually correct it next time around."

• "We should actually elect more, including the insurance commissioner."