Editor's note: This story has been updated with Attorney General Ken Paxton's comments.

Embattled Texas Attorney General Ken Paxton told Tea Party supporters on Saturday that politics has played a role in his legal troubles, and made comments that led some Democrats and reporters to conclude that he had admitted being audited by the IRS.

But Paxton wasn't being literal, his campaign spokesman told The Texas Tribune.

"It was probably in-artful wording," spokesman Matt Welch said about Paxton's reference to the IRS. "He was trying to demonstrate the absurdity of the attacks against him."

He made the comments during a Tarrant County political event, The Dallas Morning News reported. The paper obtained an audio recording of Paxton's remarks from the Lone Star Project, a Democratic political action committee.

Paxton told members of the audience to imagine someone they've known for 35 years who has been a good neighbor and then moves away to take a new job.

Then, suddenly, he said, "this neighbor's in all kinds of trouble." 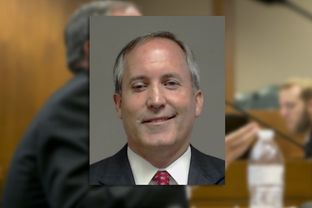 Paxton, a former state lawmaker, faces federal and state securities fraud charges stemming from when he was an investment adviser. The attorney general was indicted by a Collin County grand jury last year, and, earlier this month, the U.S. Securities and Exchange Commission brought charges against him.

The attorney general rarely makes public comments about the charges he faces.

Welch said Paxton intends to speak out more about his legal battles. Toward the end of his speech, Paxton urged the audience not to trust what the news media reports about his legal issues, that said he intends to win those battles and defend the constitution.

"You have to ask yourself, ‘Is there a character problem here? This person's been no trouble for 35 years and then, suddenly, they have all this trouble,’" he said. "Well that’s, in essence, what’s happened to me. I have no speeding ticket in my life. Never been audited by the IRS. Never been investigated by — never, no bar grievances with the state bar. I get sworn into office and everything I just mentioned happened.”

But in a statement released Monday evening, Welch clarified that Paxton doesn't have problems with the IRS.

“The Democrats saw Ken Paxton’s speech and got upset. I’d be mad too if I were them because he’s doing an outstanding job as Attorney General. For the record, Ken Paxton has never been audited by the IRS and has never had his bank accounts frozen," Welch said. "Texas Democrats are continuing their jihad against the Attorney General because they couldn’t beat him at the ballot box, so they are trying to smear him with false attacks and a campaign of misinformation. This baseless story is another example of their desperate efforts."

In his remarks, Paxton said his work on the issues including human trafficking, religious liberty, life and federal overreach have made being attorney general worth all the trouble.

"I would have to admit to you right now, if I knew then what I know now about what I was gonna have to go through, if it'd all been put in front of me, would I have run? I would say on that day I wouldn't have run," Paxton said. "But I can tell you right now, having gone through the last year and three months in office and knowing what I know now, I wouldn't trade anything that's happened to me and give up the opportunity that I've had."

Paxton's comments on the IRS were "in exact context," said Matt Angle, Lone Star Project's founder and director. The organization has called for Paxton's resignation.

"He either lied to his supporters at that event to get sympathy, or he's lying to reporters now," Angle said.

The attorney general, who was first elected to the job in 2014, plans to run for re-election.