For this week’s nonscientific survey of insiders in government and politics, we asked about that Greg Abbott book and what it might mean for his political future.

The week began with the announcement that the Texas governor, just 16 months into his first term, plans to release a book in mid-May. It's a combination of life story and a renewed push on his initiative to call a convention of the states to amend the U.S. Constitution in order to bolster the states' positions in relation to the federal government.

In many instances, books of this nature precede runs for higher office. In Abbott's case, the book comes before the conclusion of the current presidential race. While that would on its face seem to preclude linking the book to laying the groundwork for a presidential campaign, the immediate chatter surrounding the question was loud enough to force Abbott to address it directly in a Tuesday radio interview.

The insiders mostly agreed with Abbott on this, with roughly three in five said the appearance of a book by Abbott does not make a presidential run in 2020 a foregone conclusion. Another one in four said the book tells them that he will indeed run.

With the next question, we asked about the insiders' take on Ted Cruz's future presidential aspirations should he fall short this time around. Nearly three-fourths of the insiders believed that Cruz runs again in 2020. Among those thinking that Cruz runs again, they split nearly evenly on whether Cruz for President 2.0 blocks a potential run by Abbott.

We then pivoted to what Abbott does should Cruz create a vacancy in the U.S. Senate by moving up or out. Nearly half the insiders tagged Lt. Gov. Dan Patrick as the most likely of three supplied options to be appointed to the seat. That was followed by Land Commissioner George P. Bush, who was named by 17 percent, and former Texas Supreme Court Justice Harriet O'Neill, cited by 4 percent.

Fully one-third of the insiders thought that Abbott would look to someone else to fill a vacancy.

With the final question, we asked to identify a Texas politico from of a list of three who could enter the presidential conversation in four years. Housing Secretary Julian Castro was named by 37 percent, followed by U.S. Sen. John Cornyn (24 percent) and Bush (15 percent).

Another 25 percent named someone else as more likely to enter that conversation. 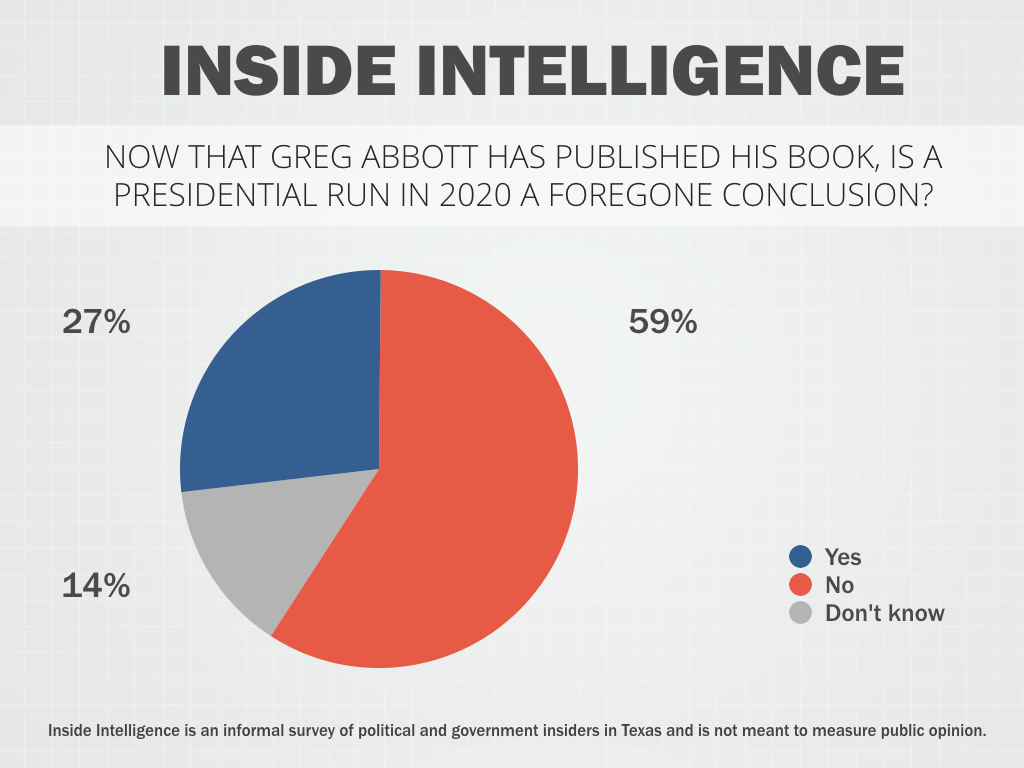 Now that Greg Abbott has published his “here’s how to fix America” book, is a presidential run in 2020 a foregone conclusion?

• "We have seen this cycle that the public demands candidates who can talk fast and think on their feet. Abbott is plenty smart, but his team keeps him isolated from the press (and real people) most of the time, which has dulled his communication skills."

• "Possible. He's posturing for such, for sure."

• "By definition, any Governor of Texas is always a potential candidate."

• "What better way to keep a foothold on your job should a former candidate for POTUS fail at that capacity, possibly narrowly, and decide the Governor's office looks attractive? Have yourself in the discussion for that caliber of position as well can't hurt." 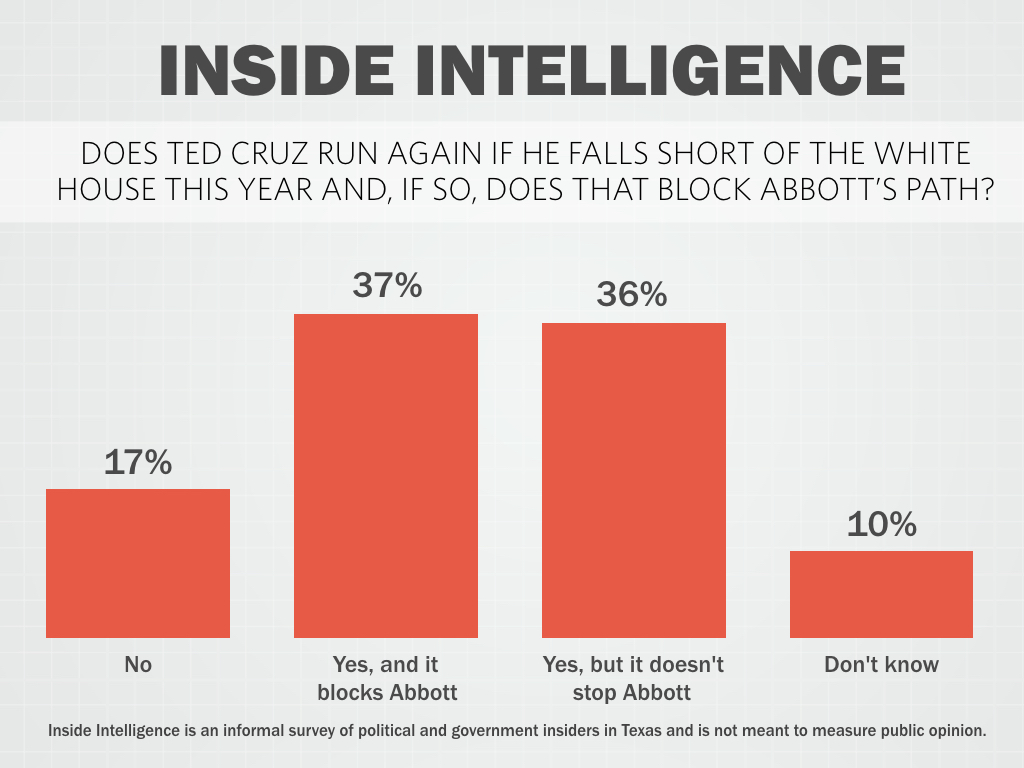 Does Ted Cruz run again in 2020 if he falls short of the White House this year and, if so, does that block Abbott's path?

• "Abbott can be on the Texas ballot twice if he's running for president and governor."

• "If Ted is the nominee and he loses the Election, he is done. If Ted doesn't get the nomination, he'll sit in the Senate and blast Hillary Clinton's proposals every day — but with four years to think about it, Republicans will come up with a 2020 candidate who has a broader reach than Ted."

• "Two from Texas won't make it again. Abbott remains Governor and waits until the second term Dem is out of office."

• "Abbott isn't running, but if he were, Cruz's running wouldn't stop him."

• "Ted Cruz has one bite at the apple... and he is taking it now. Abbott won't run for President." 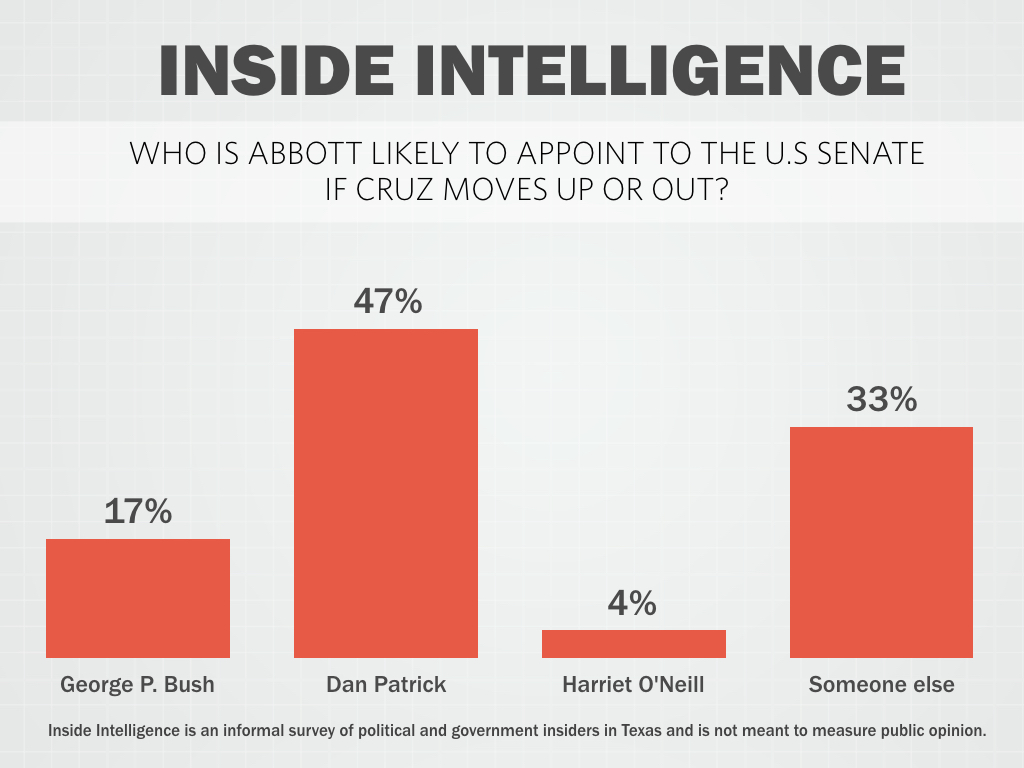 Since we’re talking about musical political chairs, who is Abbott likely to appoint to the U.S. Senate if Cruz moves up or out?

• "Appoint Dan Patrick, and take care of the 2018 primary threat to the Governor's re-election."

• "If I were Abbott, I would appoint Wallace Jefferson."

• "Patrick and Bush want to be Governor. Another Hispanic would be smarter."

• "Resigns. And lets Patrick appoint him."

• "Oh my sweet Jesus, who under God's heaven could possibly satisfy the groups who would need to be satisfied???" 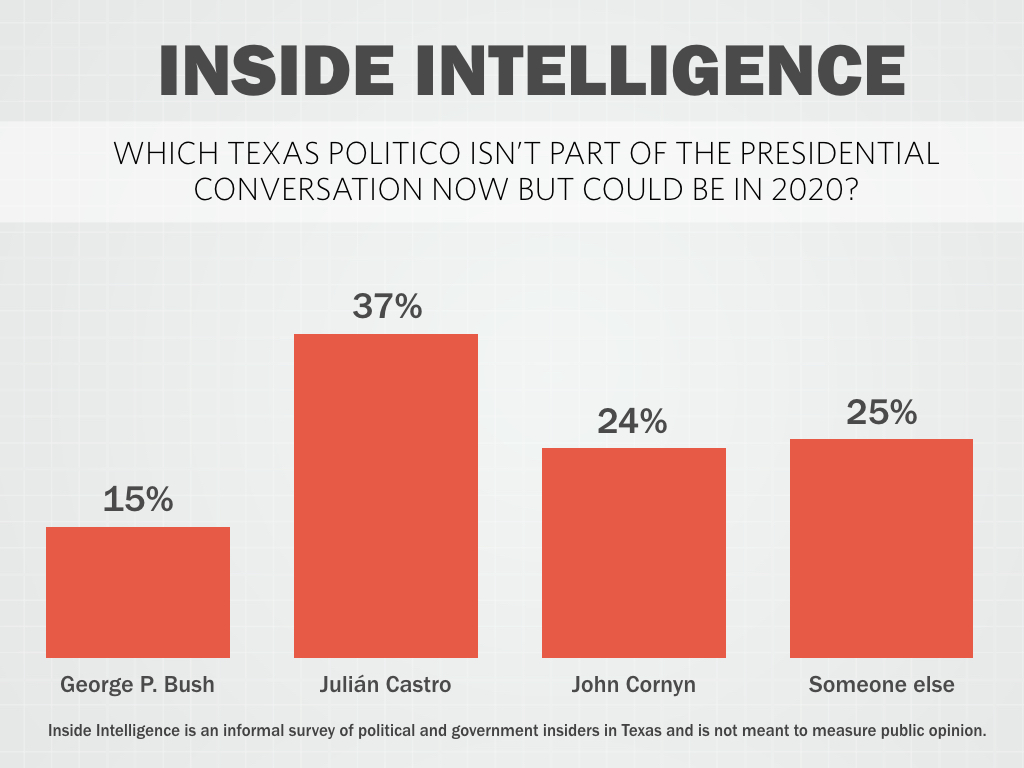 Which Texas politico isn’t part of the presidential conversation now but could be in 2020?

• "Are you kidding? There's no bench in either party!"

• "Too soon even to speculate"

• "There is not a Texas politico worthy of this mention."

• "None of the above. Julián may be a VP candidate."